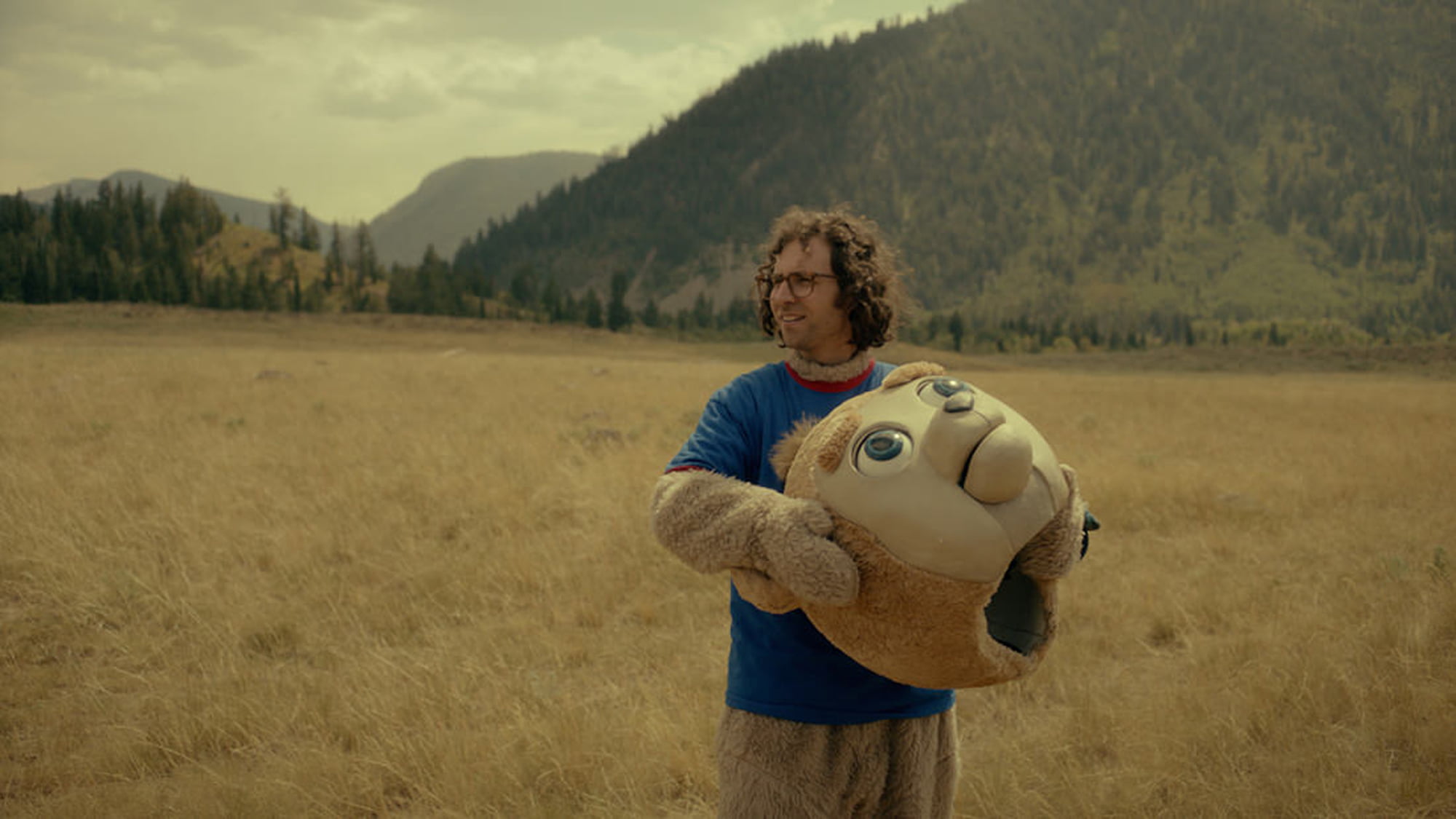 Brigsby Bear is a lovely film, but it didn’t immediately hit me how beautiful it is until a while after it ended. When this tale of a man coming to terms with his past wrapped up, I knew I had seen one of the best and most life affirming movies of the year. I already loved it, but on my way home from the screening – about ten minutes after leaving the theatre – I burst into nearly uncontrollable tears thinking back on how lovely it was. It has stuck with me, and I hope it sticks with you. The debut feature of comedy writer Dave McCary and the first leading man role for SNL star Kyle Mooney is an almost indescribable and unassuming cause for celebration. Or to say it as McCary and Mooney’s main character frequently does, “It’s dope as shit.”

James Pope (Mooney) is a man in his mid-twenties raised by his survivalist parents (Mark Hamill and Jane Adams) in an underground bunker on the outskirts of the Utah desert. Unable to leave their heavily fortified home, James’ only connection to the outside world is an unusually prolific kiddie show titled “Brigsby Bear Adventures,” a strange mash-up of Doctor Who, Marxist propaganda, Sid and Marty Krofft, Teddy Ruxpin, and Sesame Street. The show is the story of a giant animatronic bear and his twin sister sidekicks who try to stop the nefarious Sunsnatcher from taking over the universe. James fixates on the show, its messages, and infinite possibilities all hours of the day, much to delight of his father and the chagrin of his mother.

But quickly, we learn that this isn’t what it seems and James’ caregivers aren’t actually his parents. James was kidnapped from the hospital as an infant, and after twenty-five years he’s reunited with his birth parents (Michaela Watkins and Matt Walsh) and the younger sister he never knew he had (Ryan Simpkins). It’s a shocking transition made even more earth shattering by James learning that his beloved Brigsby wasn’t a real show in the outside world. The entire show was produced by his kidnappers as both a source of entertainment and as a way to insidiously control James by feeding him false messages and hopes. While James tries to adjust to a world he doesn’t understand, he fixates on making a Brigsby Bear movie and giving the character a proper send-off. James’ therapist (Claire Danes) and his parents think this is a terrible idea that’s in bad taste given Brigsby’s origins, but the kindly police officer investigating the kidnapping (Greg Kinnear) and his sister’s friends see the filmmaking process as something joyful, cathartic, and healing.

While Mooney is best known as a performer adept at playing oddballs and eccentrics in sketches and supporting roles, Brigsby Bear shows that he can craft the same kinds of characters for dramatic purposes. The role of James is well within Mooney’s already established and growing wheelhouse; he’s an awkward nerd with a big heart and a handful of social hang-ups. Co-writing with childhood best friend Kevin Costello, Mooney makes sure at every turn that James is treated humanely and fairly. James might be a bit goofy, but here’s a young man who went through something extraordinarily heartbreaking; someone who needs time and patience to move on in a world that wants to give him little of either. James could have been treated as a jester, but instead is depicted as a stunted adolescent who couldn’t control his circumstances. In an cinematic age where so many depictions of stunted adolescence are used to celebrate boorish behaviour or treated meanly as punchlines, Brigsby Bear’s welcoming and borderline melancholic tone achieves maximum potency and resonance. 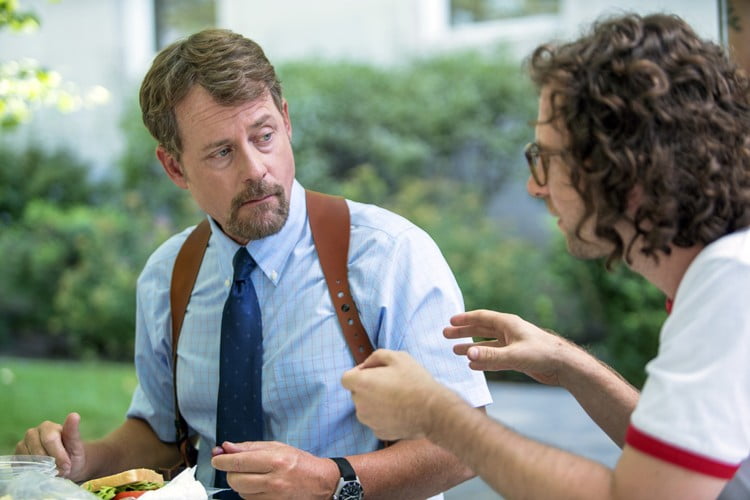 The complexity of the material doesn’t begin and end with James. Through subtly, but thoughtfully outlined supporting characters, McCary and company are able to show where everyone’s opinions and suspicions lie without ambiguity. James’ mother and father are keen to make up for all their lost time as quickly as possible, which makes sense and is equally sympathetic and misguided. James is hurting on the inside as much as his parents are, but there’s no previously established relationship in his mind to work from. James’ sister understands that he needs time to heal and become whole again, but it’s still a hump to get over how weirdly her brother handles himself. James’ newfound teenage friends (including a great performance from Jorge Lendeborg Jr. as a budding filmmaker trying to make his new bestie’s movie a reality) understand that he’s older, but a kid at heart. Kinnear’s detective knows that helping the young man is technically against his legal mandate, but there’s also a strong kinship and desire to comfort. Danes’ therapist might seem villainous, but it’s always made clear that she’s simply doing her job. Hamill, in one of the most unique roles of his career, is a picture perfect portrait of emotional and narrative unease, one handled with great delicacy by McCary and the writers. All of these characters are working from a playbook that doesn’t exist. Maybe with the exception of the fake show within the film, everything that transpires in Brigsby Bear feels like it could actually be happening somewhere in the world at this given moment. These are people worth opening your heart and mind to, and they’re around us everyday if we only cared enough to look for them.

Brigsby Bear is a film so packed with emotion that it’s constantly in danger of taking a sharp left turn into darkness or falling apart altogether. While most of the praise for the film’s success will likely fall at the feet of Mooney and his equally game cast mates, McCary should also be noted for making such a well paced and stunning looking debut feature out of material that comes with an almost preternaturally high level of difficulty. Balancing whimsy, melodrama, realism, and almost Malick-ian poetic visual asides, Brigsby Bear looks and feels like nothing I’ve ever seen before and could likely never be replicated again. You won’t see a film in this dark year brimming with more hope and optimism, and the fact that it does so without pulling any emotional punches is a testament to its greatness.

I have cried harder at Brigsby Bear than anything I have cried at in years, but I have also thought about it longer and harder than any other theatrically released film this year. Like James’ favourite television show, I want to watch it again and again, learning every little detail it has to offer.

Brigsby Bear opens at Cineplex Yonge and Dundas in Toronto and International Village in Vancouver on Friday, August 4, 2017. It opens in Montreal on Friday, August 18 and in other Canadian cities throughout the summer.

Check out the trailer for Brigsby Bear: