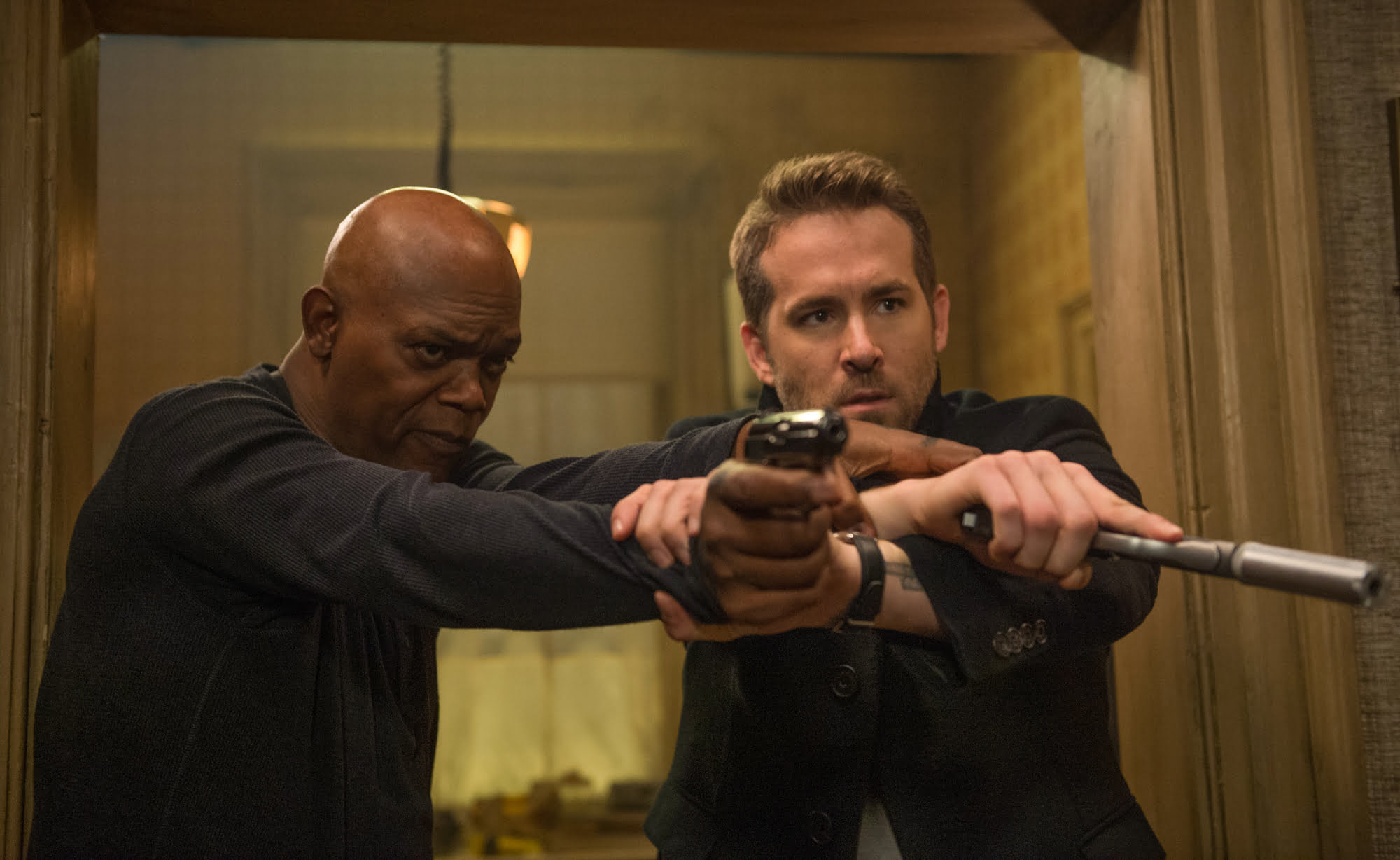 A passably entertaining bit of late summer fluff, the action comedy The Hitman’s Bodyguard is exactly what you probably think it’s going to be going in: two charismatic actors riffing on each other while dodging bullets, fists, and bombs. A comedy firmly steeped in the traditions set forth by Midnight Run and Lethal Weapon, The Hitman’s Bodyguard doesn’t earn too many points for originality or style, but it achieves every modest goal it sets out to make. If you’re in the mood for an action comedy, this is an action comedy that won’t wow you, but it won’t let you down, either.

Former Belarusian dictator Vladislav Dukhovich (Gary Oldman) is standing trial at The Hague on war crimes charges, but finding a witness for the prosecution has been vexing since no one lives long enough to take the stand. Interpol authorities are down to their last hope: Darius Kincaid (Samuel L. Jackson), a ruthless contract killer who once took a meeting with the deranged leader. Kincaid, already rotting away in a London jail cell, agrees to testify, not for leniency in his sentence, but to set his tough-talking wife (Salma Hayek) free from a Dutch prison. An attempt to transport Darius from London to Holland goes horribly awry, and only one field agent, Amelia (Elodie Yung), and Kincaid are left standing after an ambush on Interpol’s motorcade. With nowhere left to turn, the agent reaches out to her ex-boyfriend Michael Bryce (Ryan Reynolds), a former “triple A rated” protection agent who once protected warlords and powerful dignitaries, but now spends his days thanklessly guarding drugged up boorish lawyers after a high profile arms dealer was killed by a sniper on his watch. Needing someone outside of Interpol to protect Kincaid, she begs Michael to take the hitman from England to Amsterdam. Michael is reluctant, not only because of his conflicted feelings for Amelia. Kincaid has tried to kill many of Michael’s clients over the years, and the hitman’s “shoot first and ask questions later” mentality clashes wildly with the bodyguard’s more measured and thought out set of combat skills.

Director Patrick Hughes (The Expendables 3, Red Hill) and writer Tom O’Connor aren’t reinventing any genre tropes or clichés with The Hitman’s Bodyguard, but it’s never a drag to sit through. Delivering high quality action set pieces and giving two gifted comedic talents plenty of jabs and barbs to throw at each other, there’s something delightfully unpretentious about The Hitman’s Bodyguard. I always knew that I had seen this exact plot play out before in more movies that I would care to count, but I also realized that this is a solid riff on this particular kind of story. All a film like this has to do if it wants to succeed is to be entertaining, and Hughes and company aren’t trying to do much more than that. As long as Reynolds and Jackson keep engaging with each other at an equal level and Hughes keeps the action beats coming at a good clip, things will be just fine.

The Hitman’s Bodyguard also gives its main cast the chance to do what they do best while acting slightly against type. Reynold’s prim and proper protector – one who lives by the credo “boring is best” – is a lot less sarcastic of a “know it all” than the actor usually portrays. Similarly, Jackson’s “big swinging dick” is a notch above the badass roles he usually gets, and he seems to have taken on many of the sarcastic tendencies that Reynold’s character might have had if this same film were made with the exact same cast a decade ago. Oldman brings a little bit of eccentricity to his role as the deformed villain, but his part is so small that it could almost be called a cameo despite getting high billing in the credits. But no one steals more scenes than Hayek. She doesn’t even need to leave her jail cell to elicit the film’s biggest belly laughs. Threatening grievous bodily harm and cussing out every sadsack to darken her doorstep, Hayek’s work here is nothing short of brilliant. It’s the kind of role where even the most seemingly inconsequential of dialogue becomes funny in her hand. It’s a shame that Hayek rarely gets a chance to interact with the rest of her cast (save for Jackson in some flashbacks), but The Hitman’s Bodyguard picks up considerably whenever she’s on screen.

For his part, Hughes delivers some high end set pieces, particularly a lengthy boat, motorcycle, and car chase through the narrow streets and canals of Amsterdam and an appropriately loopy, credibility straining climactic shootout. He also makes the film brutally violent in an attempt to up the stakes and hammer home the fatal nature of the main characters’ given professions. There are plenty of head shots and gaping wounds to be found, but none are dwelled upon in a bid to keep the audience having a good time. Hughes knows how far he can push the material, and he never reaches any sort of breaking point, clearly more enamoured with the bromance at the story’s centre than either of the duelling love stories. It’s a tad overlong, but then again, even that’s a criticism shared by most buddy action flicks.

If it sounds like I’m damning The Hitman’s Bodyguard with faint praise, you might be right. I prefer to think that I’m giving it an appropriate amount of praise. This feels like a film that could have been made in the 80s or 90s with no deviation and in the early 2000’s with the exact same leads and results wouldn’t differ. A ticket to The Hitman’s Bodyguard is self-evident. If what you want is a well paired comedic action team running and gunning their way across Europe, you’ll get your money’s worth. Don’t expect too much out of it, and you’ll be just fine.

The Hitman’s Bodyguard opens in theatres everywhere on Friday, August 18, 2017.

Check out the uncensored trailer for The Hitman’s Bodyguard: