Boasting a star making performance from Australian actress Danielle Macdonald, the rousing, crowd pleasing, smart, and inspirational Patti Cake$ follows closely in the vein of other films about hip-hop artists trying to make it big while still maintaining a unique sense of setting and cultural identity. The first half of Patti Cake$ is heavily indebted to Craig Brewer’s Hustle and Flow, while the second half finds ways of riffing on Curtis Hanson’s 8 Mile, but despite these obvious storytelling comparisons, first time feature writer and director Geremy Jasper’s film has enough unique characters and insights to set itself apart.

23 year old Cadillac Brougham driving Patricia Dombrowski (Macdonald) works the bar at a townie dive in suburban New Jersey and takes on a catering gig to make some extra cash so her burnt out, alcoholic mother (Bridget Everett) can keep a roof over their heads. Patricia dreams of being a rapper alongside her East Asian partner-in-crime and hype man Jheri (Siddharth Dhananjay), but neither of them fit the traditional mold of what a rapper should look like. He’s a nerdy, brown skinned pharmacist, and she’s an overweight white girl. Their struggles to get noticed by someone other than Patti’s gruff, supportive grandmother (Cathy Moriarty) lead to an unlikely partnership with Basterd (Mamoudou Athie), an anitsocial DIY grindcore artist living in an abandoned shack that turns out to be a musical genius.

Patti Cake$ finds Jasper – a musician and music video veteran – blending his own perspectives on growing up marginalized in a dead end town with time honoured inspirational movie tropes. To say that Patti Cake$ is a film about believing in oneself and doing whatever it takes to achieve one’s dreams would be obvious, but Jasper embraces the obviousness and timelessness of his protagonist’s situation. He’s also unafraid to be somewhat critical towards his heroine and her desire to succeed. A key scene in the film where Patti tries to approach a rapper she idolizes at a catering gig examines the difference between criticizing someone’s use of cultural appropriation and dismissing someone’s art outright. Patti takes herself seriously and for his part as a filmmaker, Jasper takes her dream of leaving town more seriously than the music. 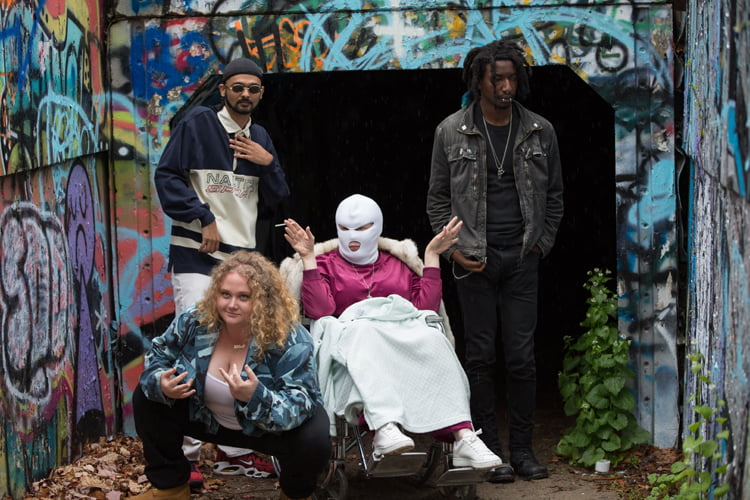 Not that the music (largely penned by Jasper) isn’t good. If the music were bad, the whole film would probably be dead in the water, but Patti Cake$ has crafted likable heroes who can make a killer hook out of Moriarty’s throaty rasp, a bridge from a non-existent 80s hair metal ballad, and rhyme “Neosporin” with “Wheel of Fortune.” The tracks created by Patti, Jheri, and Basterd are lovingly rendered, but not to a point where these newcomers have become genius artists. There’s a homespun quality to the music produced by Patti and her crew of friends and family that serves as a perfect reflection of the podunk town that spawned it.

Jasper’s story doesn’t hold too many surprises, but the depth of his characters makes up for some of Patti Cake$‘s more cliched and time honoured twists. For most of the movie, the filmmaker adopts a verite style to make small town Jersey look as gritty as possible, but Jasper lets his music video roots shine through in some elaborate dream sequences where Patti transports herself into fantasies of stardom. Those are fun moments, but for the most part, Jasper makes sure to keep Dombrowski’s feet firmly plated on the unforgiving ground.

It would all be passably amusing if not for the performances involved. Macdonald balances Patti’s confidence and insecurity with great logic, nuance, and emotional intuition, making a heroine that’s flawed but lovably sympathetic. Everett steals all of her scenes as Patti’s harsh, world beaten mother, showcasing a dramatic side that the comedic performer rarely gets a chance to use. Moriarty elevates what could have been a cliched motherly figure into a memorable turn. The chemistry that Macdonald has with each of her family members and each of her bandmates comes across as believable and lived in, which is exactly what an inspirations story along these lines needs to succeed. The cast elevates Patti Cake$ to another level beyond its modest trappings.

One of the most oft repeated chestnuts of popular music came from Bob Marley: “One good thing about music: when t hits, you feel no pain.” Patti Cake$ is the story of a young woman who’s the living embodiment of that statement, and while the plot has been done more ambitiously and dangerously in other films, Jasper, Macdonald, and company have made a worthy crowd pleaser from an otherwise dark formula.

Patti Cake$ opens exclusively in Toronto and Cineplex Yonge and Dundas on Friday, August 25, 2017. It expands to Vancouver on Wednesday, August 30 and nationwide on Friday, September 8.

Check out the trailer for Patti Cake$: