Review: ‘Jumanji: Welcome to the Jungle’ 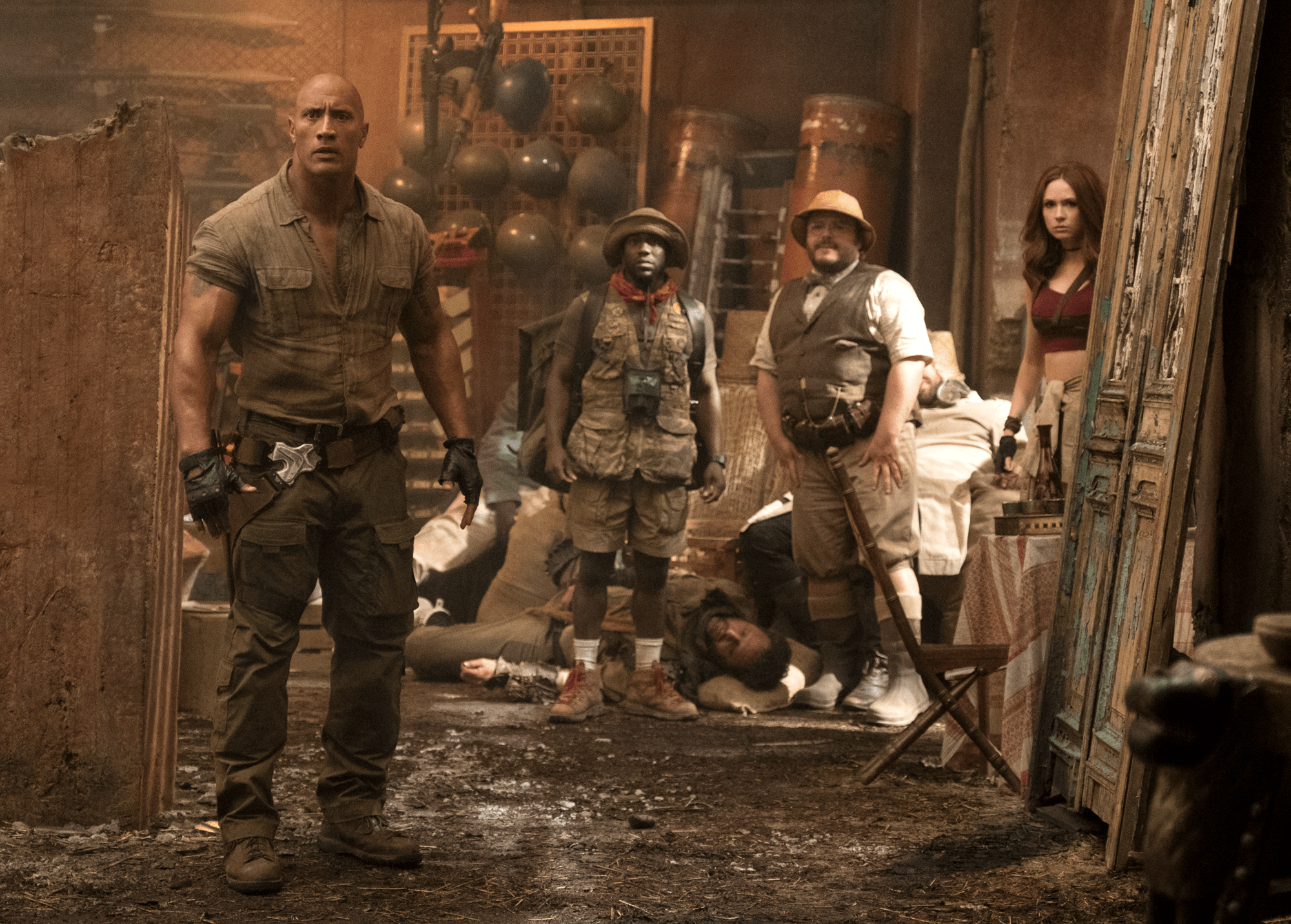 In 1995, director Joe Johnston’s loose and almost unrecognizable adaptation of Chris Van Allsburg’s award winning children’s book Jumanji was relatively unloved by critics, but was a box office smash as far as the general public was concerned. The tale of kids who unleashed monstrous wild animals (and an almost feral Robin Williams) upon their unsuspecting home town via an enchanted board game became a cornerstone in the history of 90s kiddie cinema. It’s looked back upon with great nostalgia and fondness today, but I wonder how many people remember the experience of seeing Jumanji in the theatre more than they remember the film itself.

I was more or less the appropriate age to properly enjoy the original Jumanji upon its initial release, and I think I did. I say that I think I enjoyed it because I never remembered disliking it. Other than some fleeting memories of rampaging animals destroying things I couldn’t remember much about it. Nothing about Jumanji stuck with me. It was decent enough filler made on a large budget. A re-watch of Johnston’s original last week confirmed the feelings of my younger self. I mostly enjoyed it, but the second it ended, if you were to quiz me on anything that happened, I would fail with flying colours.

Last night, I took in a screening of the “long awaited” and largely in-name-only sequel Jumanji: Welcome to the Jungle, and my feelings are – for better and for worse, I guess – the exact same. I didn’t actively dislike (most) of what I saw unfolding on screen, but the second the iconic, titular Guns N’ Roses track started up over the rolling credits, I had forgotten almost everything that had come before them. Again, I knew that I had some degree of fun, but I can’t remember much of the fun that was had.

After being thwarted in its plans to take over the world (or something like that), the board game somehow transferred all of its magical energies into a video game adaptation where player can choose their avatars before getting sucked into the game and into immediate peril. Unlike the original film’s Alan Parrish who had to navigate perils on his own for many years, Jumanji: Welcome to the Jungle has a quartet of unfortunate teens getting sucked into the game after stumbling upon a dusty old console while performing menial tasks during detention. Nerdy, shy Spencer (Alex Wolff) suddenly becomes a swaggering, dangerous archaeologist (Dwayne Johnson). Footballer Fridge (Ser’Darius Blain) transforms into a diminutive zoologist (Kevin Hart) who carries his best friend’s bag and has a severe allergy to cake. Social media obsessed mean girl Bethany (Madison Iseman) gets her just deserts by selecting a flabby, middle aged cartographer (Jack Black). Wallflower Martha (Morgan Turner) tries to adjust to her placement inside the body of an expert “dance fighter” and butt kicker (Karen Gillan). If they want to escape the game, this crew of teens who don’t like each other much in the outside world must band together and use their avatars’ special skills to return a magical jewel to a monument and thwart the plans of a psychic villain (Bobby Cannavale) who can control the thoughts of the animal kingdom. They’re aided in their quest by a fellow gamer (Joe Jonas) that has been stuck in his pilot avatar since he first played Jumanji in the mid-90s.

It’s best not to think about the dynamics of how something like Jumanji works, and clearly director Jake Kasdan (Orange County, Sex Tape, Walk Hard: The Dewey Cox Story) hasn’t strained many brain cells trying to make sense of this, either. Jumanji: Welcome to the Jungle takes a good twenty minutes to establish the teens before pulling them into the game, which is nice in the sense that it establishes some basic sense of character, but a negative in the sense that the film is already too long as it is. Like many B-grade video games, Jumanji: Welcome to the Jungle flits from scene to scene with as little connective tissue as possible, content to deliver spectacle and emotional high spots in place of a story that matters very little and carries almost no intellectual investment. It’s a movie where “a bunch of things” happen, and the outcomes of these contrived, predictable situations are never in doubt. There was one moment of genuine shock in the film involving Jonas’ character, but it passes quickly and without lasting effect. 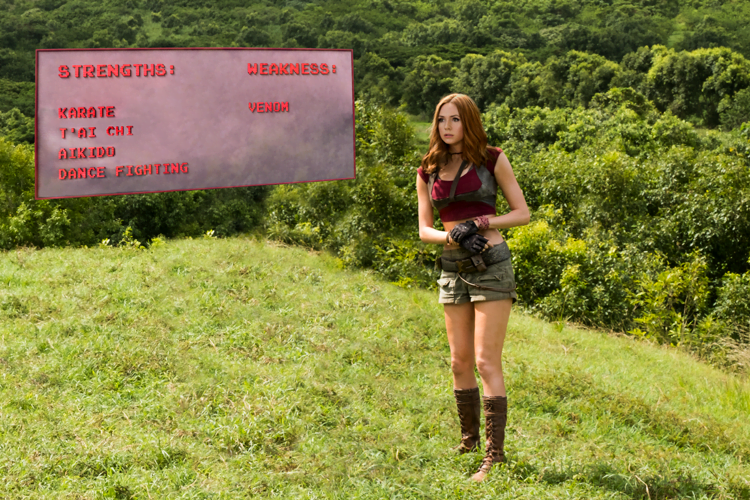 Like the first film, the moments of peril and off the cuff bursts of lowbrow humour make it a dodgy choice for younger viewers, but although this sequel takes place within the game instead of in the real world, Jumanji: Welcome to the Jungle seems aimed squarely at the now grown or teen fans of the original that have a fervent, nostalgic attachment to 1995. Although the two films look completely different, Kasdan has pitched his efforts at the same tonal level, making it feel admirably like a sequel instead of a spin-off.

Kasdan might not have been the best choice of a director for such a tent-pole. Even his best efforts have been marred by horrible editing and ineffective handlings of major set pieces, and Jumanji: Welcome to the Jungle isn’t any different. But one thing that Kasdan has always been uniformly excellent at is assembling a game cast that builds up large amounts of good will and warmth. None of the major casting choices for the film strike as outside the box choices, but Kasdan has found four perfectly chosen leads with exceptional chemistry.

From last year’s Central Intelligence, viewers will know that Johnson and Hart are well matched comic and physical performers who play well off each other. Again, Johnson plays a nerd in a beefcake body, and Hart plays the guy constantly annoyed by his role as the sidekick to a dorky friend. Gillan’s a great choice for an acerbic, stand-offish warrior type. Black steals every moment he can by pitching his depiction of a vapid, narcissistic teen girl just short of over the top. There’s a generous amount of give and take between these talented performers that’s a joy to watch. When Jonas’ still decently performed outsider gets added to the crew, the dynamic remains intact, but the film starts to drag on a bit longer than it needs to.

Nothing that happens in Jumanji: Welcome to the Jungle is really worth discussing. The villain is weak, and his evil plans are paper thin no matter how much Cannavale is admirably trying to vamp it up in his few all-too-brief appearances. There are only four major missions the heroes have to carry out, and all of them take far too long to reach their obvious conclusions. As the film pushes needlessly closer and closer to the two hour mark, tedium is in danger of settling in, but thankfully never arrives. Kasdan saves his own film because his cast is too great to fail, even with material pitched at such a low level.

I doubt I will remember a lick of this year from now, but I will remember that I liked the cast quite a bit. Maybe it’s Robin Williams’ performance that people remember most about the original Jumanji. He was quite good in that film, and the leads are quite good in this one. Maybe that’s just one more way that Jumanji: Welcome to the Jungle plays on a continued sense of nostalgia.

Jumanji: Welcome to the Jungle opens in theatres everywhere on Wednesday, December 20, 2017.

Check out the trailer for Jumanji: Welcome to the Jungle: