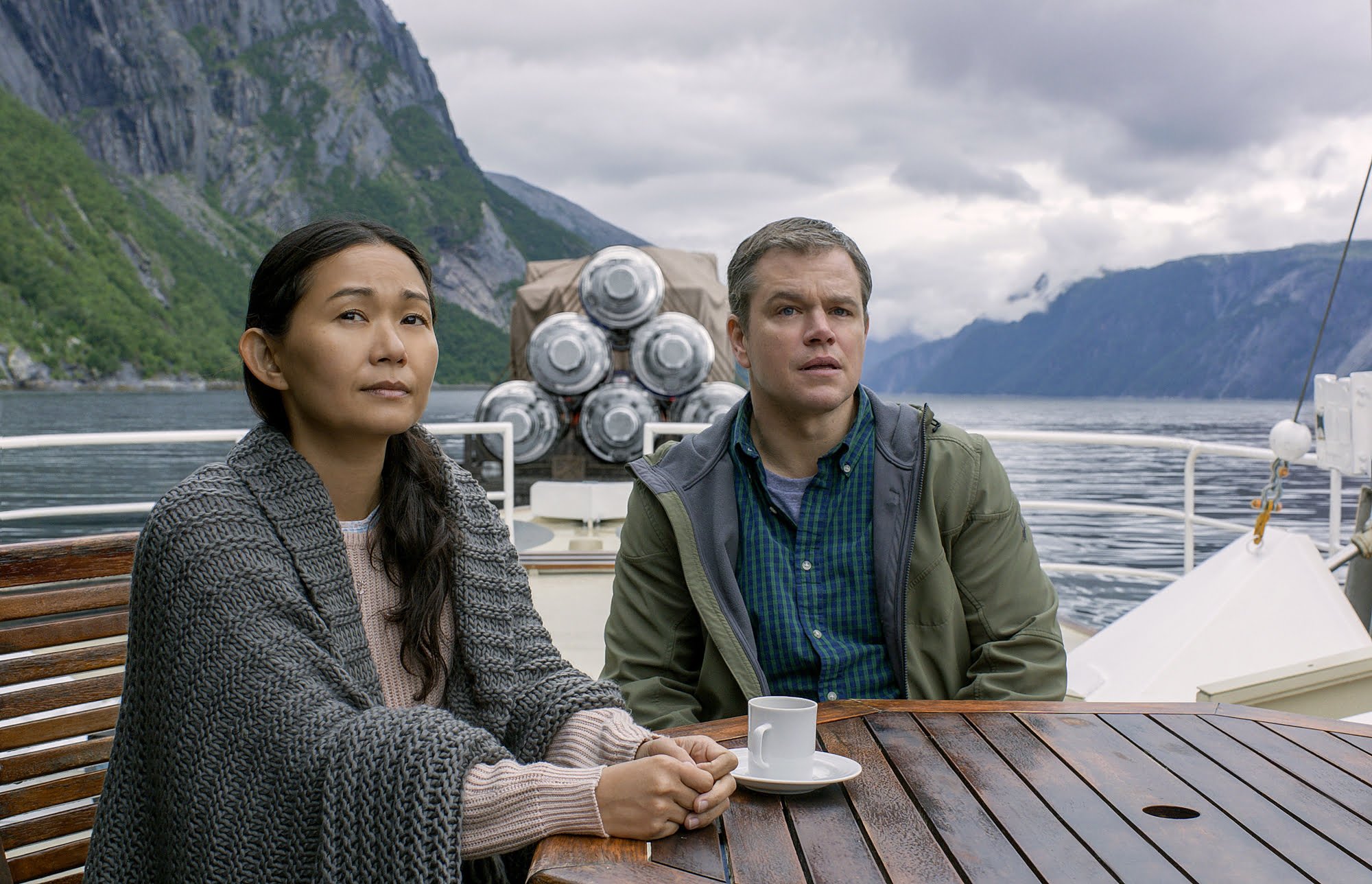 Writer and director Alexander Payne’s Downsizing is both his most ambitious and markedly disappointing project to date. Packed to bursting with too many great ideas and little follow through, it’s a story and concept that would work better as a series than it does as an overlong and underdeveloped 135 minute film. If that abundance of purpose were all that was wrong with Downsizing, I might be inclined to recommend it, but there are plenty of other problems that make sitting through Payne’s latest a didactic drag.

After a group of Norwegian scientists discover that people can be shrunk to the size of several inches tall in a bid to reduce humanity’s footprint on an already overtaxed Earth, the procedure becomes all the rage. One of the people taken by the idea of going small is Paul Safranek (Matt Damon), a married physical therapist from Omaha, Nebraska. With his wife (Kristen Wiig) by his side, Paul plans to leave the full size world behind. Without spoiling too much, things don’t work out quite the way Paul wanted them to in his new home in New Mexico, but new friendships with a flamboyant, worldly neighbour (Christoph Waltz) and a one legged Vietnamese dissident turned house cleaner (Hong Chau) begin to alter the way he sees the world around him.

Payne and co-writer Jim Taylor give the viewer no shortage of material to chew on, but a lot of the themes and hypothetical musings being raised by Downsizing are more interesting to think about off screen than watching them unfold through these dull as dishwater characters. Thinking about a film long after it ends is usually the sign of strong work, but here it’s much more of a signifier of strong concepts combined with missed opportunities.

Not only have the people in Payne’s vision of a new world been shrunk, but so too has the package containing their stories. Individual sequences where Paul gets pitched on the idea of going small for financial and material benefits by a salesperson with the zeal of someone trying to offload a time share or watching later as Paul toils away unhappily as a telemarketer rhyme nicely and show obvious meaning, but it’s all hollow and obvious. Downsizing isn’t the story of someone trying and failing to become a better person, it’s a tale of someone who frustratingly stays the same no matter the size and the resentment that takes root. That’s an uninteresting story to watch that takes place in a world that’s more interesting than the people within it.

Damon’s dreadfully underwhelming leading performance is a major part of the problem, and while I believe to some extent that Paul Safranek was written to be a milquetoast everyman, I refuse to believe he read this dull on the page. Whether Paul is happy, sad, angry, excited, frustrated, or confused, Damon’s face and demeanor stays in the same range throughout the film. Downsizing is written as a film about someone having a moral awakening, but one wouldn’t gather that by judging the film on Damon’s work alone. Paul might raise his voice a few times, but Damon seems to think that everyday people are boring, so therefore his everyman character has to be just as boring. 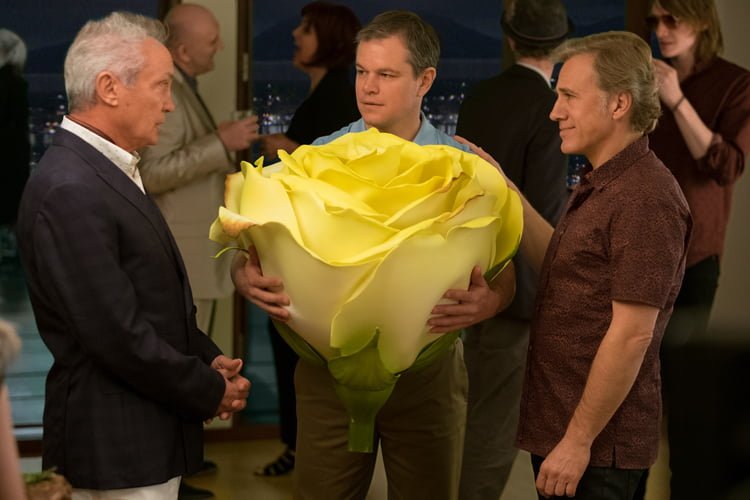 This depiction of being middle class as dreadfully dull speaks to Downsizing’s hypocritical moral stance. Payne fetishizes both the forward thinking of the wealthy and educated and the nobility and togetherness of the impoverished. If Damon’s performance in the lead is there to act as a control, Payne and his leading man have failed to created a balance for their scales. Waltz (and his on screen brother, played by Udo Kier, giving the best performance in the film) is allowed to display his character’s nobility and charm because he’s – to some degree – realistically “woke” and a resolute realist. Similarly, Chau’s sympathetic refugee is meant to represent the oppressed people who clean up after all the little people in the same way that similarly marginalized minorities did in the larger world; kept out of sight and out of mind in the upscale and middle class worlds at the end of their work days by being shuttled off to tenements on the outskirts of town. These characters are vastly more interesting than Paul, but neither of them show up until an hour into the film (making for a rare film with a decent second act, but dreadful first and final ones), and the focus never shifts from Paul’s narrow perspective. By the time the third act rolls around, Waltz has been reduced to “best friend” and Chau to “love interest,” and they’re just as uninteresting as the star of the film.

Part of the reason why Waltz, Chau, and especially Wiig have so little to do is because there’s no sense of logical escalation to Downsizing. Scenes jump wide gaps in time, not to enhance or hone the story in subtle ways where viewers can read into what happens outside the margins, but more damningly as a reason to just get on with every major beat. Nothing in Downsizing happens gradually or logically, with most of the decision making and moral wrestling happening off screen. Every time Paul’s status in the world falls further and further, it happens precipitously and not incrementally. The effect is jarring, making it obvious that at least a third or possibly even half of what Payne and Taylor had in mind never made it to the screen. It builds to a final act brimming with apocalyptic overtones and themes, arriving there without earning these feelings or building to them with any subtlety. The scientific, moral, and social concepts offer plenty to ponder, but the plotting is like someone slamming a large book on a metal table every ten minutes.

Despite a tone that bounces between whiplash and tedium, there are a few things worth praising within Downsizing. Chau and Waltz are doing everything they can to make the material work. Visually, this is Payne’s most accomplished work. The production design is inventive beyond commonplace forced perspective shots that make everyday objects look huge next to shrunken people. In terms of the pseudo-science surrounding shrinking, Payne and Taylor explain just enough to make sure everything holds together on a technical level. Individual scenes are occasionally delightful without being dramatically satisfying, so at least there’s something to latch onto.

Ultimately, Downsizing is a rare breed of failure: a film that desperately wants to spark a conversation about changing our world that simultaneously does everything possible to push the people it wants to reach the most out of the conversation. It reeks of liberal guilt and privilege, but it only dares to examine the former and not the latter. It speaks of fostering inclusivity while never offering any coherent ideas on how to make it happen and constantly chastising the viewer for not listening to the film’s barely coherent ramblings. It’s too sarcastic to be taken seriously, and too earnest to be taken as a well honed satire. It’s too mean to be gentle, and lacks any sense of bite because of its wishy-washy desires. I don’t know who Downsizing was made to please, but clearly it was made with the desperate hope someone would take notice of its messages.

I propose a do-over. Let’s strike this film from the records, recast the lead, and give Payne and Taylor more time and space to say what they probably meant to say from the start. It might not be better, but I have a hard time believing it would be as underwhelming as this.

Check out the trailer for Downsizing: