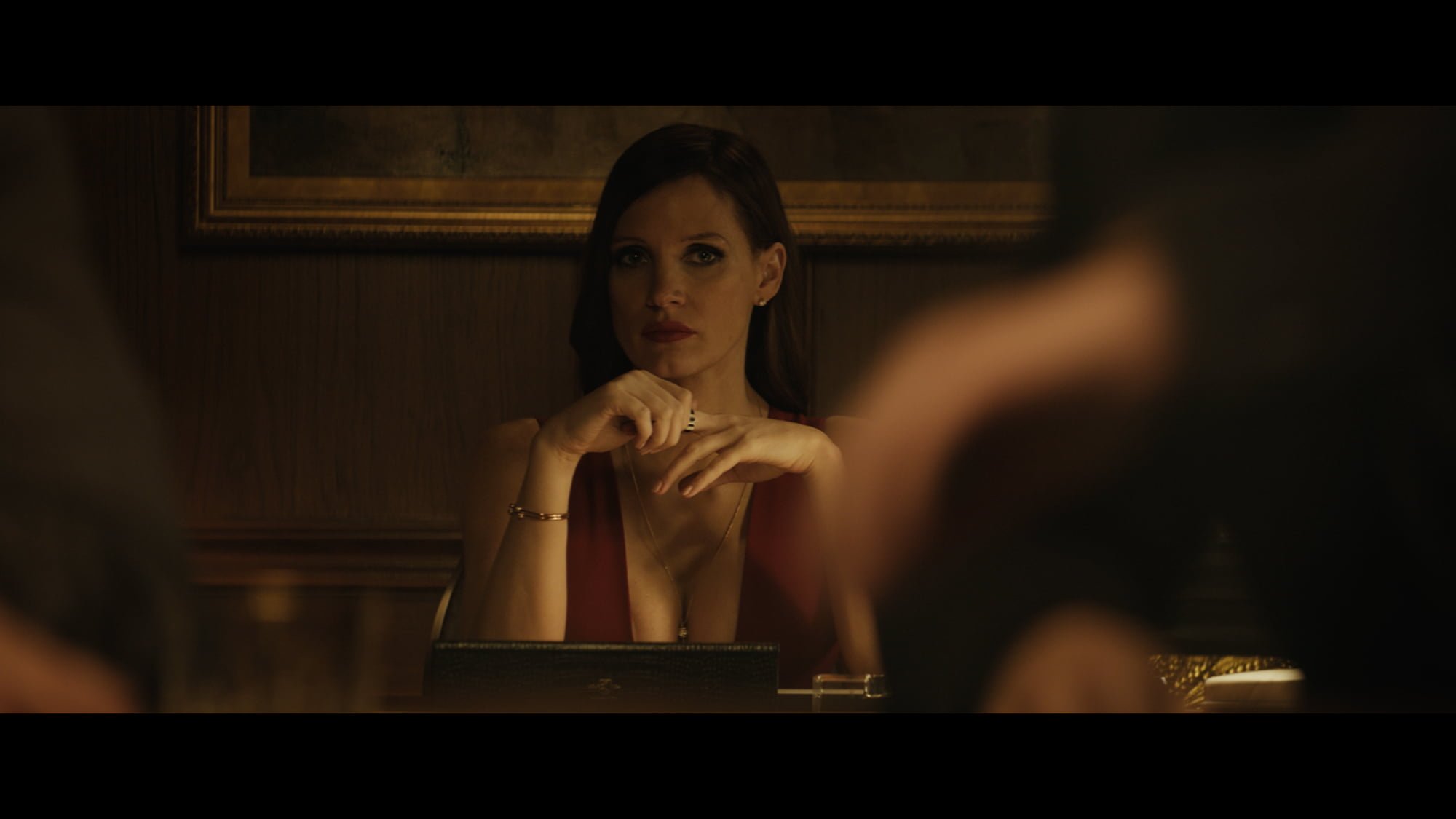 While there isn’t a whole lot of walking in writer Aaron Sorkin’s feature directorial debut, Molly’s Game, there’s certainly a lot of talking. That’s both a good thing and a bad thing. The divisive, award winning writer of The West Wing, The Social Network, and Steve Jobs retains his love of fast paced, sarcastic, endlessly referential dialogue via his screenplay and some game performances. But as a director of action behind the camera, Sorkin has a lot to learn.

It’s an adaptation of the true life story of Molly Bloom (Jessica Chastain), a once promising Olympic mogul skier and student of law who ended up becoming the mastermind between underground poker games in Los Angeles and New York that attracted high profile, A-list clientele. When the FBI busts her (two years after her last game) and she learns of a connection to the Russian mob that she plays ignorant about, it’s up to her lawyer (Idris Elba) to figure out where the truth lies.

Chastain is a perfect fit for Sorkin’s staccato rhythms and swagger. She’s a perfect Sorkin-ian hero: a bullheaded Type-A go-getter with confidence, charisma, a chip on her shoulder, and a closet full of unresolved daddy issues. In short, exactly the same kind of character that’s the lead in every other Sorkin screenplay, except this time alpha female instead of alpha male.

Chastain dives in and owns the film around her, and to her credit, Bloom is one of the most interesting and conflicted characters she has been given as a performer to date. The other side of that coin is that while Bloom is an intriguing person on and off the page, it’s a role that finds Chastain once again pigeonholed into a performance similar to those she gave in Miss Sloan and Zero Dark Thirty. In some ways, she’s in danger of becoming the female Clint Eastwood: she comes in, lays down the law, puts people in their place, takes what she wants, and leaves. While it’s entertaining, it’s not establishing much of a range for her, and Sorkin – already uneasy as a director – seems keen to defer to his leading performer’s instincts rather than establishing any of his own.

Chastain and Sorkin are at their best in Molly’s Game at the same time, via sequences that move at a breathless pace and often have nothing to do with the actual character or plot arcs. A quickly edited opening sequence where Molly cheekily blends bravado and humility while explaining how her Olympic hopes were dashed threatens to bring the whole movie to an early peak before it even gets started. Listening to Molly narrate as Sorkin quickly takes the viewer through the ins and outs of the underground, high stakes poker world is a lot of seedy fun. It’s an unapologetic, quick witted, and fascinating trip through the underworld with a guide who’s fresh out of shits to give. Her interactions with her abusive moron of a former boss (Jeremy Strong), an unnamed A-list actor who frequents Molly’s tables (Michael Cera), and any number of mid-level players (Brian D’Arcy James’ perpetual loser, Chris O’Dowd’s lovelorn sad sack) bristle with energy and conviction. Sorkin knows how to assemble these sequences because they’re naturally flashy. 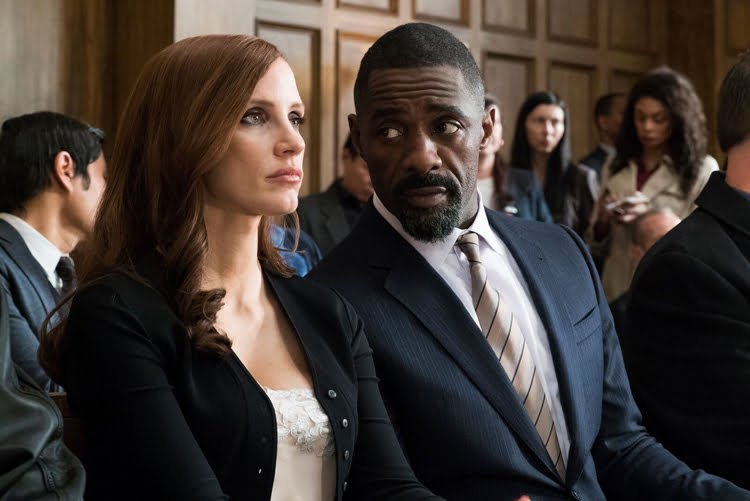 It’s the scenes where Chastain and Elba have to interact where the film stumbles. The dialogue keeps rattling on at a mile a minute, but Chastain blows Elba off the screen. She has far more conviction and confidence in the material than Elba does. The two sit down, discuss their options, yell, hurl insults, and discuss some more. They do it all while sitting down, almost motionless, and the effect is like being locked in the trunk of a car with two people shouting at each other. It’s in these rudimentary and unexceptional scenes – that comprise the bulk of Molly’s Game – that Sorkin loses his footing entirely. He can make the poker exciting, but he can’t make the details of the legal case against his main character into anything watchable or compelling. Elba is a fine performer, but at a certain point in this overlong 140 minute endurance test, I began to dread seeing him return to the screen because it was a signifier that the visual action was about to slow down to a crawl.

The result of such start-and-stop suddenly pacing is that Molly’s Game ends up being more exhausting than invigorating, like watching eight seasons of a television show sped up into a single film. It’s pure, unfiltered, and unchecked Sorkin, and once the filmmaker runs out of flashbacks to Bloom’s past clients, missteps, and anecdotes and has to focus on Molly’s well being during her hearings, the writer-director’s worst impulses take over.

Instead of letting Molly be Molly – a strong woman with her own agency – Sorkin pushes all his chips to the middle of the table and does the one thing I dislike about his writing most of all. He stops Molly’s Game dead in its tracks to lecture the audience through a paternal character about how every great person is great because they had an awesome, if somewhat flawed father figure in their life. Just as the film should find Molly in the middle of her own form of soul searching, Sorkin trots out the character’s estranged father – played here by Kevin Costner – from literally out of nowhere to give her a therapeutic one on one chat that will solve all her problems and mental anguish through a good cry. This “gee whiz, isn’t it great being a dad” sermonizing similarly brought down the ending of Moneyball, the ending of Steve Jobs, and (in a metaphorical sense) too many episodes of The West Wing to count. Heck, his entire Oscar acceptance speech several years ago was expressly about how great it is to be a dad. Here, it doesn’t just drag the movie down, it’s like a torpedo to the climax; a never ending, embarrassingly written and performed sequence so self-indulgent and out of place that it makes the lead character look like she was a dope all along.

The scenes in Molly’s Game that are great are electrifying and memorable. The scenes that fail are cringe inducing among the worst in any film this year. Instead of quitting while he’s ahead, Sorkin keeps betting on the strength of his material for way too long, ultimately leaving the table – and his audience – empty handed.

Check out the trailer for Molly’s Game: