Writer and director Scott Cooper’s Hostiles isn’t one of the worst films I’ve ever seen, but it’s one of the worst kinds of films: a self-important, plodding, and basic diatribe about the negative impact of Colonialism that’s too wrapped up in its own sense of personal accomplishment and air of ennui that it doesn’t realize how it’s conforming to negative stereotypes instead of subverting them. It’s not the first time that a filmmaker has attempted and failed to make a message movie that turns out to be “accidentally racist,” and I doubt it will be the last, but the wealth of talent and effort that has clearly gone into Hostiles makes it all the more unforgivable.

Set in the late 1800s – less than a decade before the turn of the century – Hostiles follows not one, but several well worn, clichéd, and unsurprising storylines to make its muddled, bet hedging points about the pillars America has been built upon. Captain Joseph Blocker (Christian Bale) is headed towards retirement after a lifetime serving in the U.S. military as a dedicated hunter and “re-settler” of indigenous peoples. With attitudes towards the wholesale murdering of Native Americans changing, the almost obsolete Blocker is tasked with one final mission: accompany former prisoner and combatant Cheyenne Chief Yellow Hawk (Wes Studi) and his family back to Montana so the aging and ailing leader can die on his homeland with peace and dignity. Knowing what Yellow Hawk and his people were capable of in battle, Joe refuses to trust the enemy he’s been asked to chaperone, constantly waiting for an excuse to kill him. With a band of fellow soldiers by his side, Blocker has no choice but to comply with presidential orders to secure his future pension. The trip becomes something more dangerous, however, when the soldiers and returning captives stumble upon a grieving widow (Rosamund Pike) who could only watch as Comanche raiders slaughtered her husband and children.

Hostiles opens with that slaughter: a seemingly kindly and educated family of white people being explicitly murdered by a group of “savages” decked out in only the scariest of face paint and costuming. It’s rare that a film could lose me in its first few minutes, but Cooper (Out of the Furnace, Black Mass) manages to do so in near record time. Anything that follows a sequence like this, no matter how well intentioned or explained is doomed to feel like that Donald Trump anecdote that suggests “atrocities were committed on all sides.” Indeed, Hostiles knows this by making the film’s marketing tagline “We are all… HOSTILES,” but by fully embracing old school racist tendencies “because that’s how things were at the time,” Cooper’s film immediately and irredeemably becomes everything that (I think) it seeks to rally against. It’s the same kind of expose of American hypocrisy and comfort that Three Billboards outside Ebbing, Missouri dabbled in, but with a lot fewer original ideas and zero sense of knowing humour or humility. Cooper wants to make it known in no uncertain terms that all of humanity is a cesspool, but to open with this scene and immediately cut to ten minutes of Bale’s character detailing his disgust for Native Americans feels like a cheat once the audience is asked to start feeling sorry for everyone involved. A film about the scars of racism (one that goes out of its way to depict a black soldier placing an indigenous captive in iron chains) that just shrugs and says “well, everyone is racist,” doesn’t have any coherent arguments that can be made with any degree of nuance or rationality.

Not that Cooper doesn’t try his absolute hardest. Every sequence of Hostiles is visually and narratively crafted to swing for the fences like there’s a small puppy just outside of the frame that will be murdered if the action on screen isn’t as manipulative and easy to comprehend as possible. Cooper (working from a “manuscript” by late writer Donald E. Stewart) shouldn’t have even bothered when one considers that all of these poorly executed ideas and malformed, apolitical statements have been cobbled together amid a pastiche of clichés trucked in wholesale from the Hollywood clearing house.

Hostiles isn’t only the story of how the west was won on ambiguous morals and bloody grounds, but also (A) the story of a grizzled veteran doing one last gig before retiring, (B) the story of a man teaming up with his worst enemy in order to survive threats from a greater danger, (C) the story of a woman learning to look outside her own privilege, (D) a story of a seemingly irredeemable racist learning to be less of a racist, (E) a Heart of Darkness owing parable where a suicidal mission is carried out to extreme ends, and ultimately by the time it reaches its laughably out of place conclusion it’s (F) just another white saviour narrative. It’s baffling that a film can keep this straight of a face, without a moment of levity or insight to be found, across two and a quarter excruciating hours. 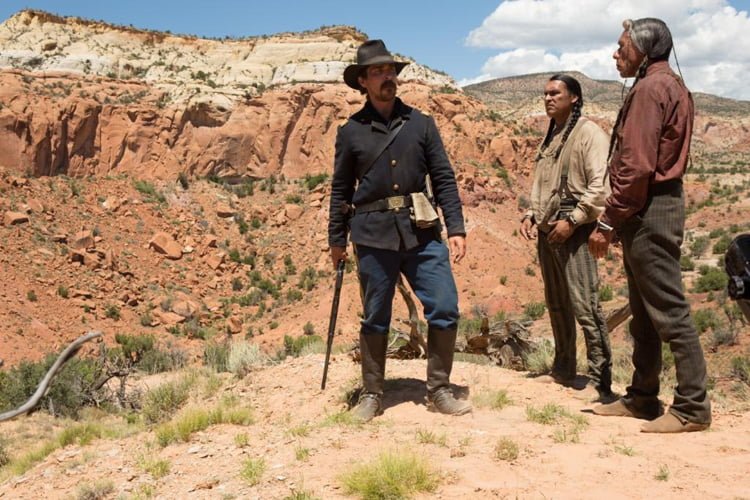 Worse still, Cooper’s narrative runs out of steam and seems to get wrapped up after only an hour, meaning the remainder of Hostiles comes packed with side quests that simply add running time and extra beats of abject misery to an already misguided and malformed drama. Once the main situation at hand gets dealt with, the audience is treated to a subplot involving the kidnapping of all women in the travelling party by some fur traders, Joe and his troops getting roped into transferring a prisoner from their leader’s sordid military past (Ben Foster, playing exactly the kind of role he’s tapped to play in almost every film he appears in), and a standoff with some wealthy, boorish, white land owners. Although the push of the story is watching Bale’s captain get Studi’s chief from point A to point B, Cooper seems least interested in any kind of story that would genuinely confront healing and the nature of conflict head on. Cooper wants to revel in the blood and misery instead of making a genuine statement. Unless of course, the statement is “all people are the worst,” and even then, that’s not much of a statement to hang one’s cinematic hat on at this point when so many other filmmakers have handled it much better and with some degree of grace and delicacy.

The native people are across the board portrayed as complicit, complacent, or evil, but at least Studi and Adam Beach (playing Yellow Hawk’s son) have moments that showcase compassion and strength. The other members of Joe’s travelling party (including thoroughly thankless characters for actors Jesse Plemons and  Timothée Chalamet) are all interchangeable cannon fodder, with none of them possessing personalities or viewpoints of their own. And the less said about the film’s depiction of its female characters, the better, especially in the case of Pike, delivering a career worst performance here, although I don’t think it’s entirely her fault. Bouncing wildly between dead eyed, scenery chewing hysterical, and as blandly/laughably philosophical as teenage poetry, Pike’s role is one that was scribbled down without ever thinking about what her contributions to the overarching story should have been in the first place. Every character except for Bale’s is simply along for the ride, and Cooper fails to keep them all in play.

But as awful as the film around Bale manages to be, he somehow digs down deep to give a performance that’s far better than Cooper’s material and direction is worth. (The same can also be said about Masanobu Takayanagi’s masterful cinematography.) As a soft spoken man who has spent a lifetime internalizing any sort of emotion or moral quandaries, Bale exudes confidence and inadequacy with a degree of harmony that few performers can craft. Although Joe is an almost mythical badass on the battlefield, we rarely see his skills as a killer. In Cooper’s only smart move, the filmmaker allows Bale to portray this archetype of western cinema as vulnerable and broken without making the character an alcoholic or an antihero. Bale’s performance manages to be the only human and humane thing in an otherwise punishingly inhumane and boring film.

Hostiles opens in cinemas across Canada on Friday, January 19, 2018.

Check out the trailer for Hostiles: