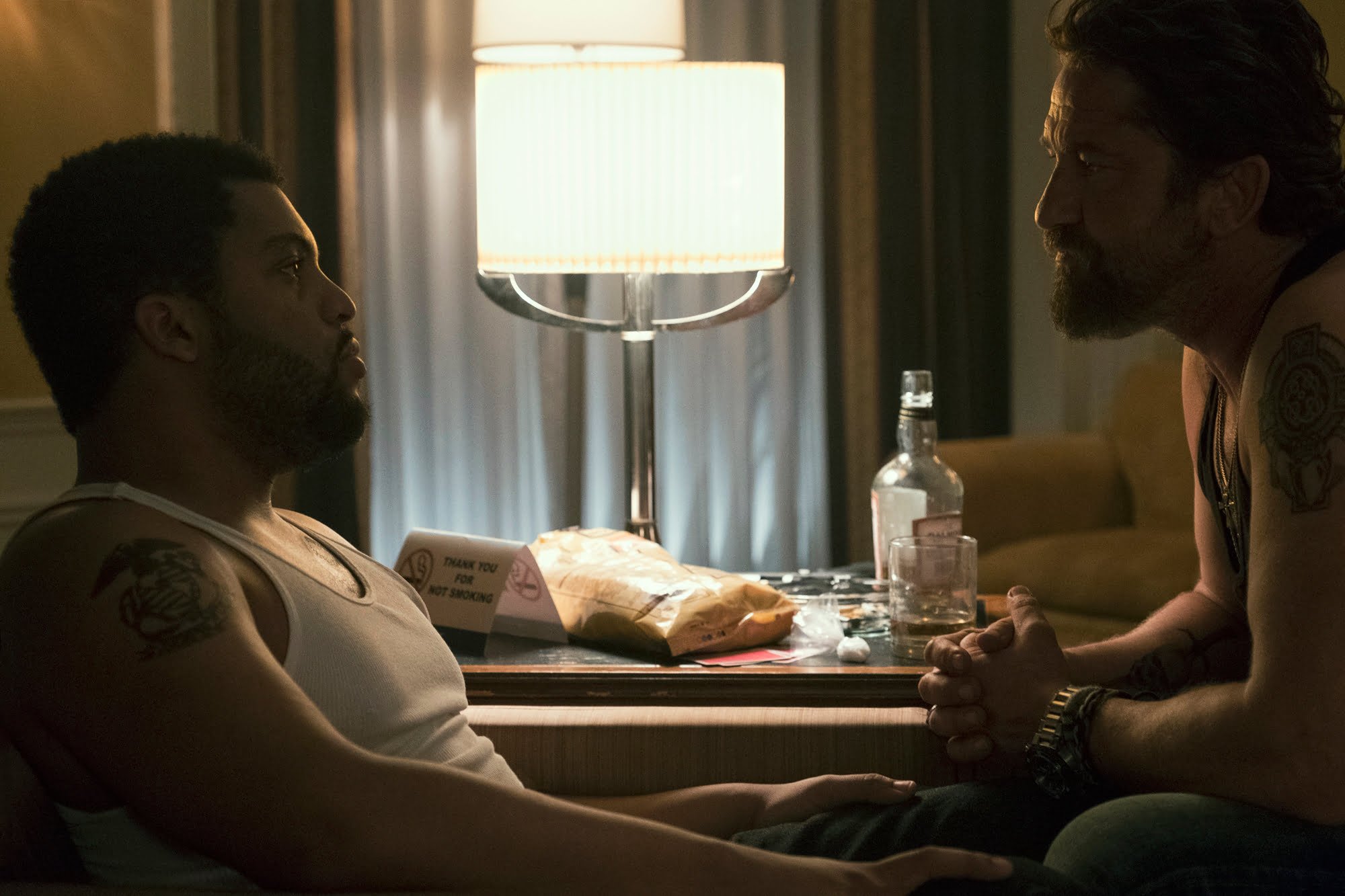 There’s not much in the heist drama Den of Thieves that hasn’t been said or done better or more elaborately in dozens of other similarly themed films. Borrowing liberally from Training Day, Baby Driver, the entire filmographies of David Ayer, Michael Mann, and William Friedkin, and most bizarrely stealing an obscure plot MacGuffin directly from the Diane Keaton/Queen Latifah comedy Mad Money, Den of Thieves doesn’t have an original idea to its name. Thankfully, writer and first time director Christian Gudegast delivers a piece of work that’s genuinely unconcerned about big ideas and more concerned with technical competency. Den of Thieves is a lumbering, but watchable two-and-a-quarter hour homage to the kinds of cops and robbers flicks that would have roughly the same running time. It’s forgettable, moderately entertaining, and ultimately delivers on the modest expectations promised on the tin.

It’s an honest criminals versus crooked cops story pitting a crew of ex-soldiers turned thieves – headed up by Pablo Schreiber’s father-like Merriman (get it, like Robin Hood) – against an elite squad of bad boy LAPD major crimes detectives, led by Gerard Butler’s trainwreck burnout , Flanagan. The crooks act like professionals. The cops act like drunken, coked up snakes. Flanagan finds a way to infiltrate Merriman’s gang (which also includes 50 Cent and Evan Jones is superfluous supporting turns) by picking up and shaking down Donnie (O’Shea Jackson Jr.), the crew’s young getaway driver. Flanagan wants Donnie to spill the details on the crew’s most ambitious and potentially impossible mission to date: stealing tens of millions in untraceable, out of circulation currency directly from the U.S. Federal Reserve.

Gudegast (best known for writing the screenplays for London Has Fallen and A Man Apart) has clearly watched a lot of heist movies. As a filmmaker, he knows what tropes work, and he carefully steers away that hasn’t been tried successfully in better films. Den of Thieves is a safe bet from top to bottom, but since Gudegast hasn’t directed before, the decision to literally stick to a script makes sense on a nuts and bolts level. Gudegast has studied the films he wishes to emulate, and he wants to replicate the feeling an audience gets from watching them, even if that means stacking his script with the hokiest of expositional dialogue to outline just what these characters are thinking and feeling at all times. Leaving anything to an audience’s imagination in a film like this could be a dicey prospect, so Gudegast makes sure that mostly everything is on the table at all times.

The is a film that’s overlong and occasionally tedious if you have a short fuse for stories that rip off better moves wholesale, but it’s not without its charms. While it’s painfully obvious and sometimes snicker inducing just how little of Den of Thieves was actually shot during a chilly Atlanta winter and not in sunny Los Angeles (despite opening text that makes it VERY clear that this is an L.A. story that can take place nowhere else in the world), Gudegast makes the most of his limited budget and resources. Every scene unfolds in exactly the manner viewers expect them to (even the well telegraphed twist ending), but Gudegast makes sure every scene looks as sleek, dangerous, and menacing as possible without devolving into self-parody. The filmmaker and his crew know their way around an action sequence, and the cast does what they can in roles some of them have played before.

Butler has a penchant for playing a cocky, unlikable jerk that often goes untapped, but is used to great effect in Den of Thieves. He’s a much more interesting performer in these types of grittier roles than safer action hero roles and rom-coms. Schreiber makes his gang leader into an understated and balanced portrayal of zen and menace. Jackson continues to impress as a performer and steals the show here as the conflicted everyman caught in the middle of a longstanding turf war between the cops and the hoods. While every other character in the film barely has any sort of function, watching these three command their given scenes and beats offers some degree of fun that the uninspired plot is missing.

Barely distinguishable from any number of direct-to-VOD titles that attempt the same modest goals, Den of Thieves will barely be remembered after its opening weekend; a footnote in the Wikipedia and IMDB profiles of everyone involved. Still, these kinds of low budget action flicks with delusions of greater dramatic grandeur are often far more annoying and fail harder that Gudegast’s work.

I felt very little stimulation while watching Den of Thieves, but I can’t say that I was annoyed or displeased with what I was watching. There is some delight to be had in wondering which classic cops and robbers sequence was going to be riffed on next, and I think my overall resolve for this kind of film has been depleted by being forced to sit through action potboilers that are far more insufferable, annoying, and morally reprehensible than this. Den of Thieves isn’t much of a film, but it’s also not trying to punch above its weight class. Rarely do I give out points for a film for not trying – because mediocrity isn’t something to be celebrated – but I will give out points for making something watchable out of material that could have backfired horribly.

Den of Thieves opens in cinemas everywhere on Friday, January 19, 2018.

Check out the trailer for Den of Thieves:

Wow. 50 Cent in something NOT produced by Emmett/Furla. How’d he manage to find employment outside his comfort zone?