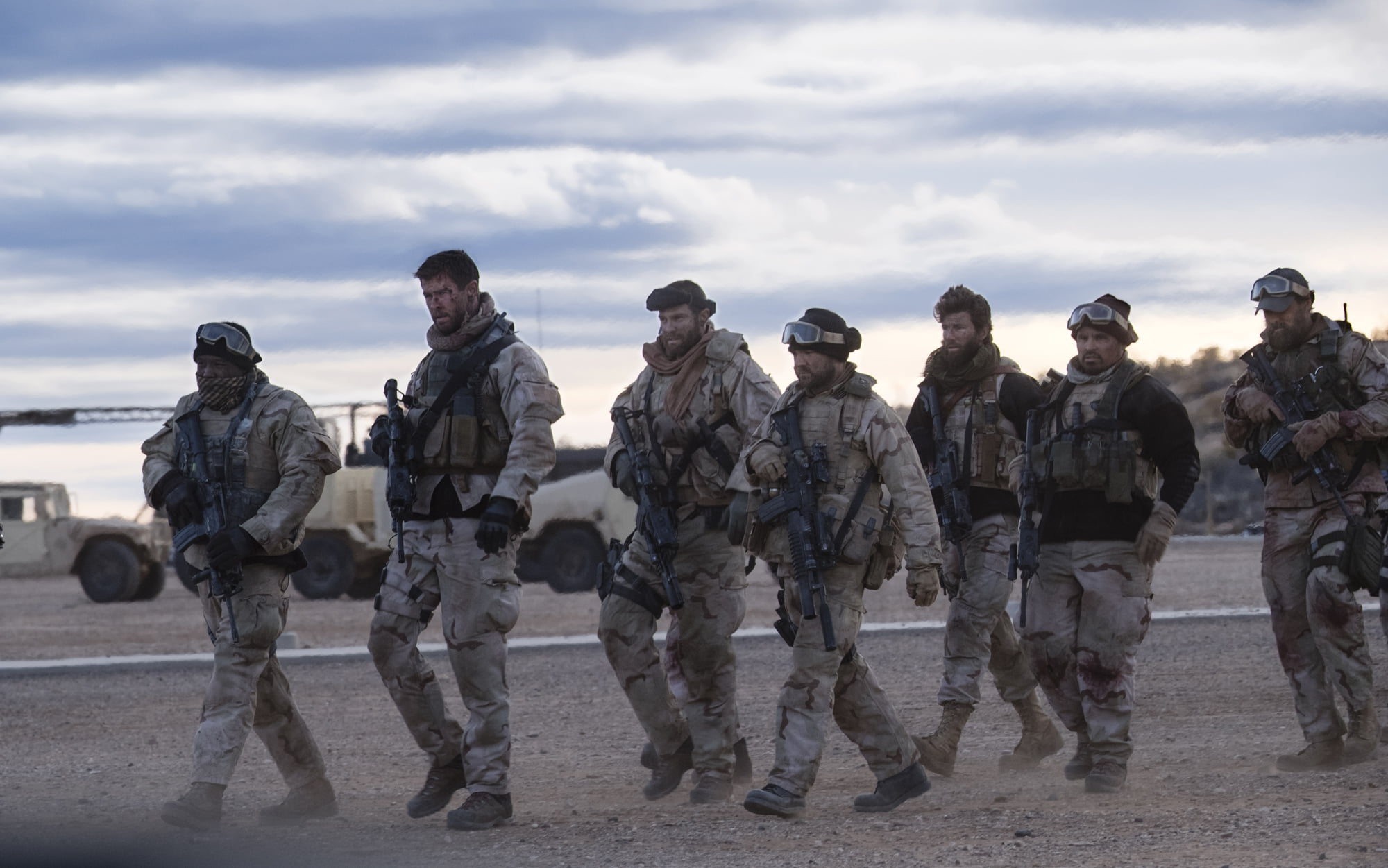 While 12 Strong doesn’t reinvent the war film template, this suitably rousing, intelligent, witty, and well told story contains more than a few surprises that make the film’s unceremonious inclusion amid the January theatrical dumping grounds a bit of a head scratcher. More of a tale of an impossible and nearly botched operation at the start of the U.S.-Afghan War and less of a celebration of American bravado, this debut feature from award winning commercial director Nicolai Fuglsig sets itself apart from the jingoistic pack by making sure the story is focused on complexity and character instead of blind patriotism.

After watching the tragedy that unfolded in New York on 9/11, Captain Mitch Nelson (Chris Hemsworth) barges into his local station office and demands that his request to be placed at a desk job (for the sake of his new and growing family) be rescinded and that he gets placed with his former squadron again. When Mitch gets his wish and his squad (dubbed Task Force Dagger) is one of the first outfits sent to get into the region, he almost wishes that he hadn’t re-upped. Unfamiliar with real life combat activity, Mitch and his team of eleven fellow soldiers (including Michael Shannon, Michael Peña, and Moonlight standout Trevante Rhodes), are tasked with courting an Uzbecki warlord (Navid Negahban) with hopes that his militia will lead the team into Taliban controlled Afghanistan to pave the way for air strikes. It’s a more difficult mission than any of them originally envisioned. Their contacts on the ground are obstinate and warring with other local warlords over who gets to battle the Taliban first and take control of the region. The terrain is so mountainous that the team has to uneasily make their way on horseback instead of on foot (with only six horses for twelve men). Oh, and they only have three weeks to accomplish a mission that would normally take three years to plan and execute properly before the brutal Afghan winter makes the passage impossible. This also says nothing of how Nelson and his team – even with a local militia – was outnumbered 5,000 to 1 and had to face fleets of tanks and missile on horseback.

Fuglsig and screenwriters Ted Tally (Silence of the Lambs) and Peter Craig (The Town) know how outlandishly impossible the mission faced by Nelson and his team sounds on paper, so it’s a welcome change of pace to find a film like 12 Strong that doesn’t belabour and overstate an already overstated and belaboured mission. Instead of gruff discussions in war rooms and strategy sessions replete with rousing speeches about the American-can-do-spirit, 12 Strong falls back on a welcome sense of camaraderie and gallows humour. Based on the bestselling book from Doug Stanton, the creative team behind 12 Strong knows that a lot of their high-concept heavy lifting has been done for them already, and Fuglsig’s desire to keep his film grounded in the people and the details strikes as a breath of fresh air following years of flag waving theatricality.

The on screen soldiers of 12 Strong feel credibly like a cohesive unit. While there are ostensibly four major faces in the crew, every member of the cast is given something important to do and something to contribute, rather than just having each one of them spout off teary eyed speeches about what 9/11 meant to them or how much they miss their families. The group dynamic in 12 Strong takes more cues form Catch-22 and The Magnificent Seven than most modern war flicks. The atmosphere is chummy, yet professional. They don’t have time to cry, wallow miserably, or lecture locals on the joys of American freedom. They’re there to do a job, get home safely, believe in battlefield superstitions, and crack a few well placed, inoffensive, darkly comedic jokes about the outlandishness of their situation to keep from going insane. 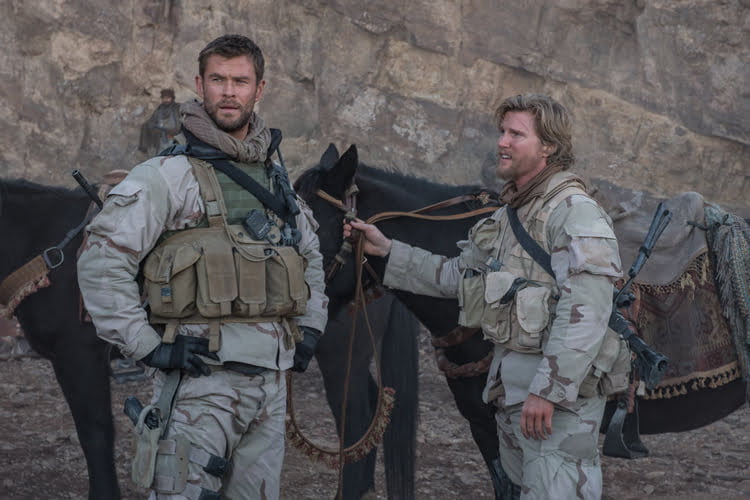 Hemsworth, in his best overall performance to date, adds subtle layers to Captain Nelson. Here’s a man who’s motivated, but untested. He can’t let his lack of experience show, but paradoxically he might also be the smartest man in the room, and unlike most untested leaders, Nelson never hesitates to speak his mind. Hemsworth showcases the internal conflict inherent in Nelson’s character subtly, partially because that’s how the character has been written. It’s a testament to Hemsworth, however, that he could pull a character like this off. In lesser hands, Nelson could have appeared like a single-minded blank slate, but Hemsworth portrays the flawed leader humanely and objectively.

Hemsworth’s chemistry with his fellow team members also feels jovial and unforced. Shannon, Peña, Negahban, and the inspired pairing of Rob Riggle and William Fichtner (as Nelson’s superiors) all have memorable interactions with Hemsworth that suggest shared histories and a professional shorthand that feels lived in instead of plodding, monotonous dramatic beats that are played to the rafters for maximum patriotic effect. With Hemsworth leading the cast, 12 Strong is a film that celebrates soldiers for being soldiers, rather than making them emblematic of anything else that the filmmaker wants to get across on a political level.

If there’s anything wrong with 12 Strong, it comes from first time feature filmmaking jitters from Fuglsig. Once the battle for the Afghan highlands kicks into high gear, the war violence is unexceptional, scattershot, and rather rudimentary. A lot of the shots and angles on the battlefield all look the same, and 12 Strong sadly becomes a film where the climactic final act manages to be the least intriguing part, despite a wealth of pomp, heroism, and explosions. Then again, if your first feature film is something this technically demanding, maybe it’s for the best to stick to material that’s this fully realized. On a technical level, 12 Strong won’t be all that memorable, but the wealth of emotion, nuanced performances, and controlled storytelling are definitely worth commending.

Check out the trailer for 12 Strong: