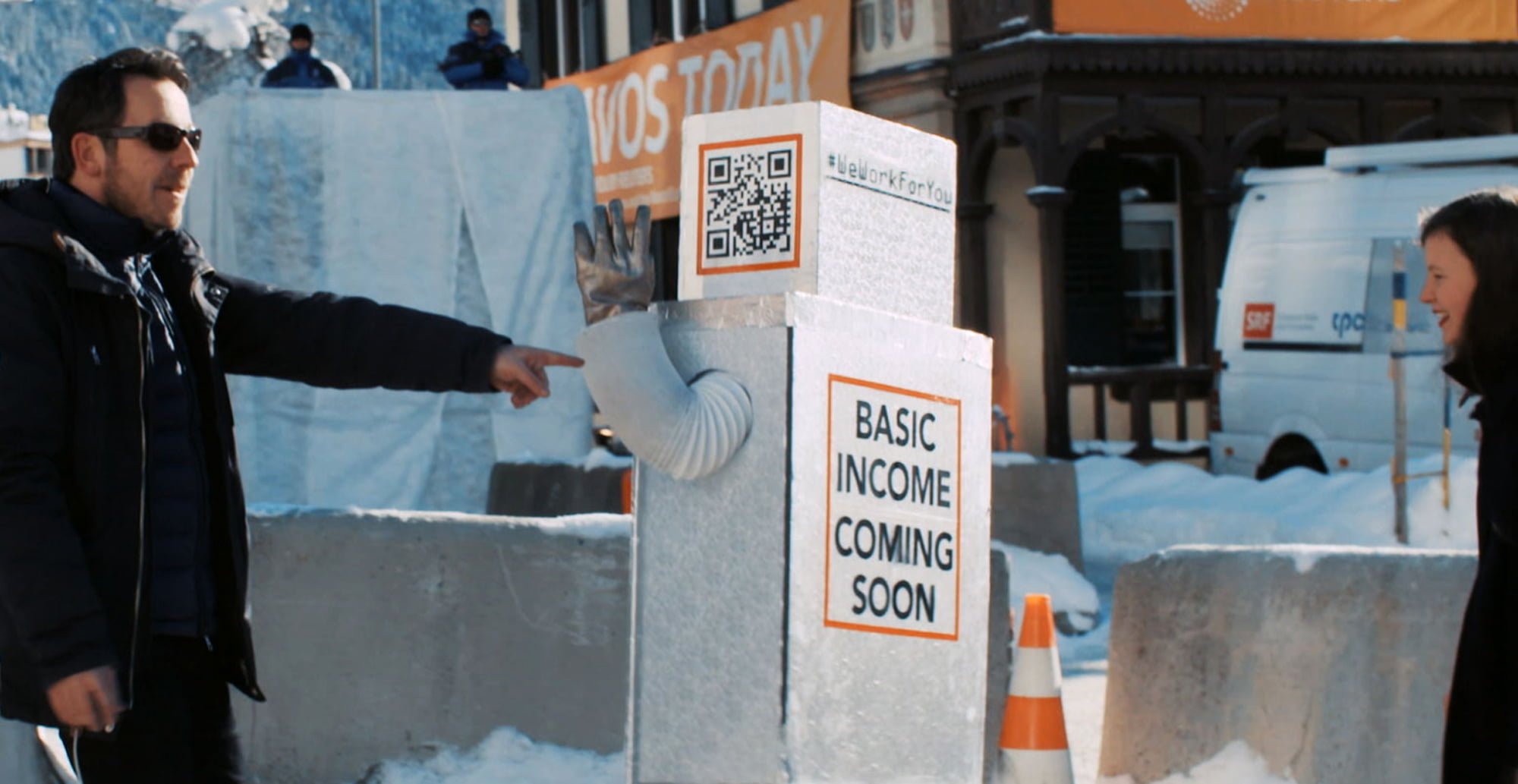 The documentary Free Lunch Society makes the concept of a guaranteed, unconditional source of income for everyone on planet Earth sound like a capital idea, but Austrian filmmaker Christian Tod skirts too many potential pitfalls, setbacks, and oversights that could turn such an idea into a reality. It’s a documentary that provides a basic overview of the subject, a laundry list of reasons as to why an unconditional basic income is beneficial to the world economy, plenty of examples of the theory working and in action, a smattering of dissent, and a near total ignoring of the larger social and psychological issues that stand in the way of it ever happening on a global scale. It’s a documentary that’s well meaning, but so focused on making a baiting, wobbly point that the gaps in logic are too insurmountable to overcome.

While Free Lunch Society (subtitled Come Come Basic Income) trots out numerous different methods and theories as to how an unconditional income could be distributed, the concept can be summed up quite simply: the government of any given country gives every citizen regardless of status, employment, or ability a guaranteed amount of money every week, month, or year. Most world economies could afford to make such payouts without ever making a dent in their coffers, essentially acting as a further stimulant to capitalism that helps strengthen the economy instead of a form of capitalism that acts as a form of materialism.

It sounds pretty simple, and Tod lays out how it can work on relatively micro and macro levels, like how residents in Alaska get a cut of the state’s oil profits every year or how Namibia is almost the first country in history to adopt such a program on a national level in a bid to eradicate poverty. Free Lunch Society wants to depict how an unconditional basic income could be a boon to the world economy, but outside of just saying how buying power serves as somewhat of an economic and political equalizer between the haves and the have-nots, most of Tod’s globetrotting examples (well shot, but narrated in an annoyingly robotized cadence) start sounding repetitive and similar. There are only so many “entrepreneurs” and stock interviews of experts on roundtable talk shows that one can trot out to discuss the subject with little deviation from similar talking points before it all starts to become dreadfully boring. A love for the subject (meaning that you already agree with Tod’s thesis sight-unseen) and a tremendous amount of patience are a must.

The best example of the benefits of a governmental income is one of the most low-key and poignant moments contained in Free Lunch Society. An Austrian everyman who won the lottery says that having an extra 3,000 bucks Euros a month helps him to feel more secure. The point of a basic income for all is to inspire consumers to exercise their buying power, but to foster a sense of security in times of need. The nobility of such a statement is one that can resonate deeply with any member of the middle or lower class that hears it. It’s about giving people money that won’t change lifestyles, but can make lifestyles better.

Admittedly, Free Lunch Society is a decidedly libertarian leaning film for a decidedly libertarian concept. While Tod and his interview subjects try mightily to suggest that the aims of a basic income run counter to capitalism as we currently understand it, everyone involved keeps going back to the point that putting purchasing power back into the hands of the lower classes will act as an equalizer. That might be using capitalism against itself, but it’s still emphatically a form of capitalism. Or as Tod and his many experts on the subject like to metaphorically call it, an expression of a form of liberty and freedom.

The political battle lines are also blurred. The political right hates the concept because they view it as a costly handout akin to welfare. The left hates it because they don’t think it can be properly regulated, and it will reduce the effectiveness and clout of labour unions. Or at least that’s how the problem is viewed today. Not too long ago in the pre-Reagan United States and before the fallacy of the soon-to-be-reignited stupidity of “trickle down economics,” the idea of such a living wage was embraced by Martin Luther King Jr. and Richard Nixon alike. It’s not that crazy of an idea if such a program was to be thoughtfully implemented, but with political divisiveness at a record high, it doesn’t seem likely to happen anytime soon, and definitely not under the Trump administration.

In many ways, it appears as if ego and the desire to maintain a stranglehold on positions of power is at the heart of why the ideas contained within Free Lunch Society aren’t being implemented, and that’s assuredly a huge part of the problem. But outside of ever coming up with any new ideas on how to distribute any sort of basic income for all humans, Tod faces an even bigger stumbling point in his thesis.

Not once during the entirety of Free Lunch Society does Tod ever look at the reasons why the poor stay poor. It’s very easy to point to the rich and say how garish and awful they are for hogging the 1% of the world’s wealth, but the only real dig at the hyper-wealthy comes from stock footage of Bernie Sanders calling out a Wal-Mart spokesperson on how the company pays employees rock bottom wages while the Waltons are one of the richest families in the world. It’s also easy to poo-poo those on the right and left alike who suggest that anyone getting such a payout has to potential to spend it foolishly or to never actually invest it back into the economy in a responsible manner.

Tod never looks at the health care industry, educational hurdles, mental illness, addictions, gender inequality, racism, ableism, ageism, or any number of factors that can contribute to poor people having worse lives than the middle class, which is equally as garish of an oversight on the part of the filmmaker. Not even something as simple and obvious as geography gets brought up in favour of more figures, numbers, and test cases that suggest such a concept could work. These are all issues that stand in the way of such an income becoming a reality, and they need to be addressed before anything Tod and his subjects are trying to achieve.

Free Lunch Society operates under the belief that a basic income – while I agree, would be extremely helpful for everyone living under it – would be a great equalizer. Again, from a capitalistic viewpoint, yes, there would be more equality on paper, but there’s a utopian idealism contained in Tod’s ideas that rings hollow and presents itself short-sightedly. The issues that Tod wants to bring to light branch off into directions bigger than the film can handle, so instead of confronting some of the biggest problems surrounding such a theory of economic equality, he plays perfectly into the hand of the right wing by basically shrugging and calling it a handout instead of a leg up.

This also says nothing about that previously mentioned robotic sounding voiceover and how it plays into Tod’s atrocious epilogue, which suggests that Tod was only thinking about all of this in the first place because now more than ever, machines and robots are about to make a human workforce obsolete. Much like the overlying good natured idea contained within Free Lunch Society, I don’t disagree with that statement, but when a film about trying to create a more equitable society has the audacity to talk about our future robot overlords instead of talking about more pressing, tangible issues that should be addressed immediately, it amounts to pill that’s almost impossible to swallow as it has been presented.

Check out the trailer for Free Lunch Society: