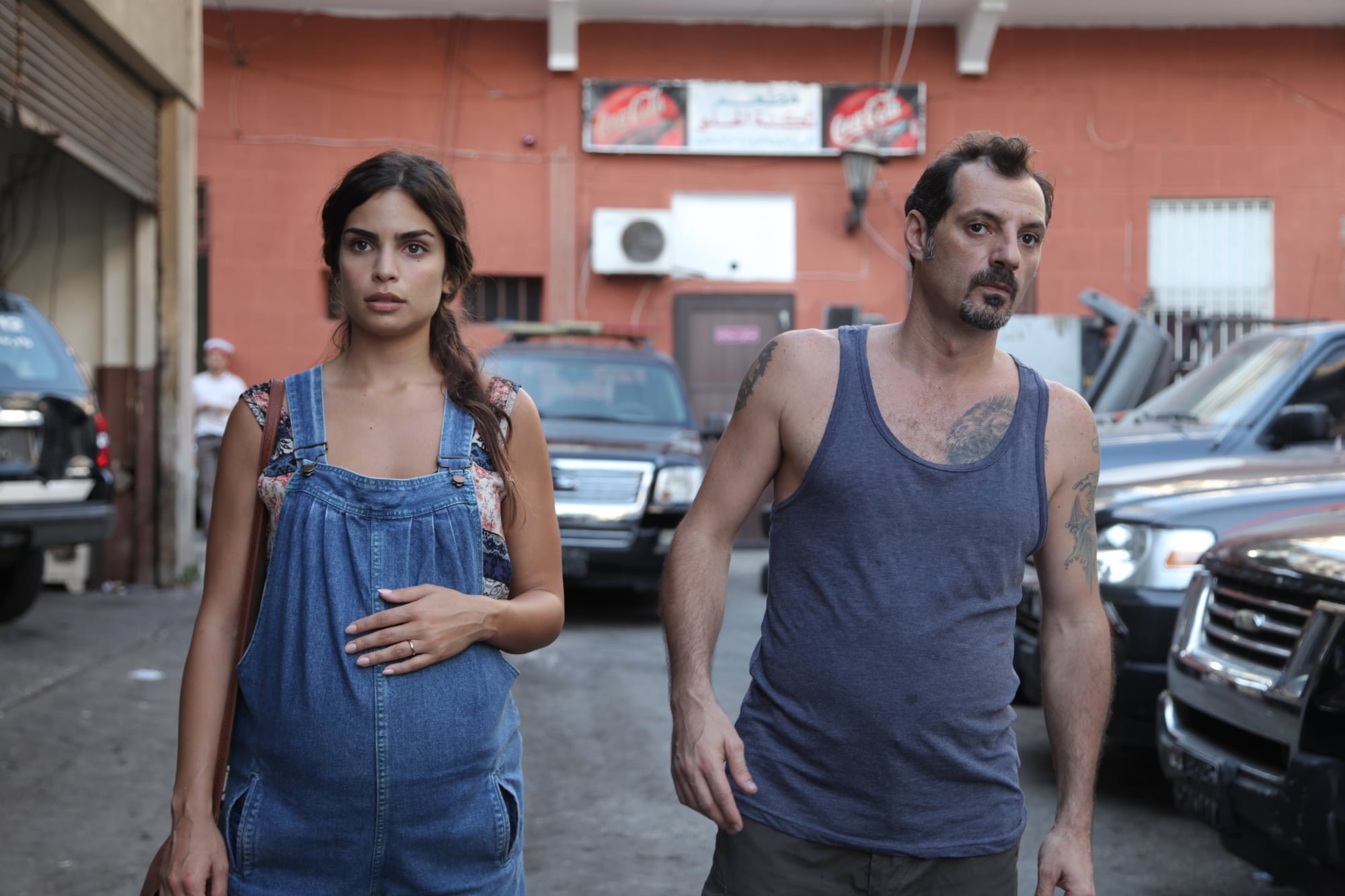 Nominated for a Best Foreign Language Film Oscar this year, filmmaker Ziad Doueiri’s incendiary and often obvious courtroom drama The Insult has a lot of great performances and an easy to understand reason as to why the storyline resonates so deeply in our current state of world affairs. This controversial Lebanese production might take place in the Middle East, but the nature of the conflict contained within has been playing out all over the world as of late. It’s culturally significant in its own country of origin, but The Insult speaks to a deeper, darker truth concerning human nature that’s more important to talk about today than has been before.

It all begins when Tony (Adel Karam), a proud Christian nationalist and auto shop owner with a wife (Rita Hayek) and a baby on the way, takes umbrage with a crew of contractors sent to make repairs and fix building code violations in his neighbourhood. A gutter spout attached to Tony’s balcony spews water onto the street instead of being channeled through a series of pipes, but when Yasser (Kamel El Basha), a slightly older Palestinian refugee working illegally with the contracting company, decides to make the repairs without consultation, Tony blows a gasket. Already seeing Yasser and his fellow refugees as a scourge and drain on the country’s resources, Tony demands an apology come directly from the Palestinian himself. After basically being forced into apologizing by his hand-tied boss (Talal Jurdi), Yasser is forced to listen to Tony spew vile, racist sentiments directly to his face before a line is ultimately crossed. Yasser punches Tony in the chest, breaking a couple of ribs in the process. Tony sues Yasser not for monetary compensation or to put the man in prison, but to get the sincere apology he feels he deserved from the start. Even if Tony wanted a greater punishment for Yasser, no one in the politically volatile country would want to take the case, especially after the racist remarks that Tony admits he said to anger Yasser in the first place. But when the consequences of their actions turn tragic, Tony and Yasser’s case becomes an ideological battle of wills for their diametrically opposed lawyers (Camille Salameh for the plaintiff and Diamond Bou Abboud for the defense), and eventually into a media circus that blows things further out of proportion.

Doueiri (The Attack) has made a film not only about the racism inherent in Lebanese society or about the current ongoing refugee crisis around the world, but more importantly and pointedly about the modern nature of rage itself. It’s easy to see why Lebanon’s first even submission for a Foreign Language Film Oscar has resonated so deeply with Academy voters in a year where the similarly twisty and morally ambiguous Three Billboards outside Ebbing, Missouri has seemingly struck a similar nerve. Much like Martin McDonagh’s black comedy and even Scott Cooper’s recently released Hostiles, The Insult is a film about how two wrongs don’t make a right, and that the worst reason for fighting a perceived slight, injustice, or insult is “because of the principal of the thing.” The Insult is yet another film released in the past year that looks head on at how people in the world today find it much easier to get angry and stay angry rather than looking for tangible solutions or moving on with their lives.

Although the dispute in The Insult transpires between a Lebanese citizen and a Palestinian immigrant with no status, the entire narrative created by Doueiri and co-writer Joelle Touma could just as easily be taking place between a Trump supporter in America and a refugee from any number of countries. If Tony heard of a plan to build a wall to keep immigrants out, he’d speak out in favour of it, and then in the next breath swear that he had no real political allegiances. Yasser feels trapped and abhors the privilege that Tony possesses and brandishes as an excuse for his boorish behaviour. To certain right-leaning government officials, Tony could be seen as a “Joe the Plumber” type; someone whose story of hardship in the new world economy could be exploited for political gain. The Insult might take place in a region with particularly volatile religious divisiveness, but this sense of nationalistic pride has been running rampant around the world. With protectionism at an all time high, the micro problems of Doueiri’s work have been magnified to a global scale, something that I don’t think escapes the filmmaker.

There are moments throughout The Insult that are blunt and more obvious than they need to be. When Tony’s wife places his hand on her stomach to feel their newborn, asking if he thinks the baby can hear and feel everything that’s happening, it’s a bit over the top, especially when one considers some of the twists the story is about to take from that point on. Similarly, a surprise connection between Tony and Yasser’s lawyers initially strikes as intriguing, but is so underdeveloped that it serves as just another blatant metaphor and nothing more dramatically interesting. Even the inciting incident of fixing a faulty gutter feels a bit on-the-nose. It’s not a subtle film and at times it borders on being outright manipulative, but I can’t say that The Insult isn’t dramatically effective where it needs to count. 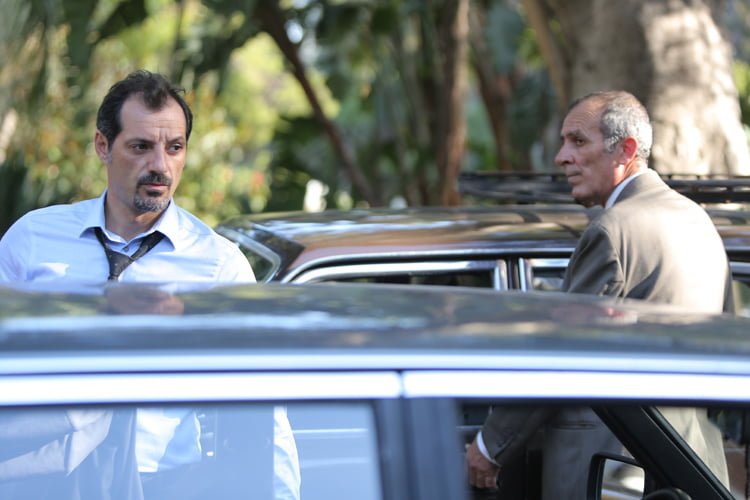 Doueiri doesn’t focus too much on style, often mounting scenes with nothing more intricate than a good looking tracking shot set to a sometimes overly dramatic musical score that further blows the story out of proportion. Instead, Doueiri lets the words and performances do the talking, and it turns out to be the right choice.

Salameh and Abboud don’t show up until thirty minutes into the film, but they’re relishing their roles as socially minded rivals. Salameh makes the most out of a potentially thankless role as Tony’s wife thanks to a more nuanced approach towards Tony’s anger, but sadly the same can’t be said for Christine Choueiri as Yasser’s wife, a character who starts off intriguing before getting left in the dust by the flashier story elements. Basha delivers a performance built perfectly on his character’s quiet temerity, making him a perfect foil for Tony’s perpetually apoplectic ire.

But a film about the nature of anger and retribution should naturally belong to the showiest character, and Karam commands every frame. Wholly unlikable at first, Karam throws himself into Tony’s basest instincts with a full head of steam. Karam portrays Tony as a man who has only fleeting moments of comfort and happiness who’s afraid of losing control of his freedom forever. It’s not a huge leap to suggest the parallel between Tony’s impending fatherhood and his belief that his country is losing its cultural identity, and Karam picks up on that interplay with great subtlety. And while it does take Doueiri almost the entire running time of the film to explicitly state why Tony is such a loudmouthed, obstinate jerk (an explanation that’s admittedly not all that great and somewhat culturally suspect), it’s a testament to Karam’s abilities that the viewer is willing to follow him along instead of wanting to run as far away from him as possible.

The Insult will assuredly spark plenty of conversations regarding its cultural message, and most of those conversations will probably be for the best. It’s not the strongest film of this year’s crop of Best Foreign Film Oscar nominees, but it’s definitely the most political and timely. Despite all its faults, The Insult is a film that could force many to do some much needed soul searching and to confront their own sense of privilege. There’s never anything wrong with that.

The Insult opens at TIFF Bell Lightbox in Toronto on Friday, January 26, 2018. It opens at The Globe in Calgary on February 2nd and at Vancity in Vancouver on February 23.

Check out the trailer for The Insult: