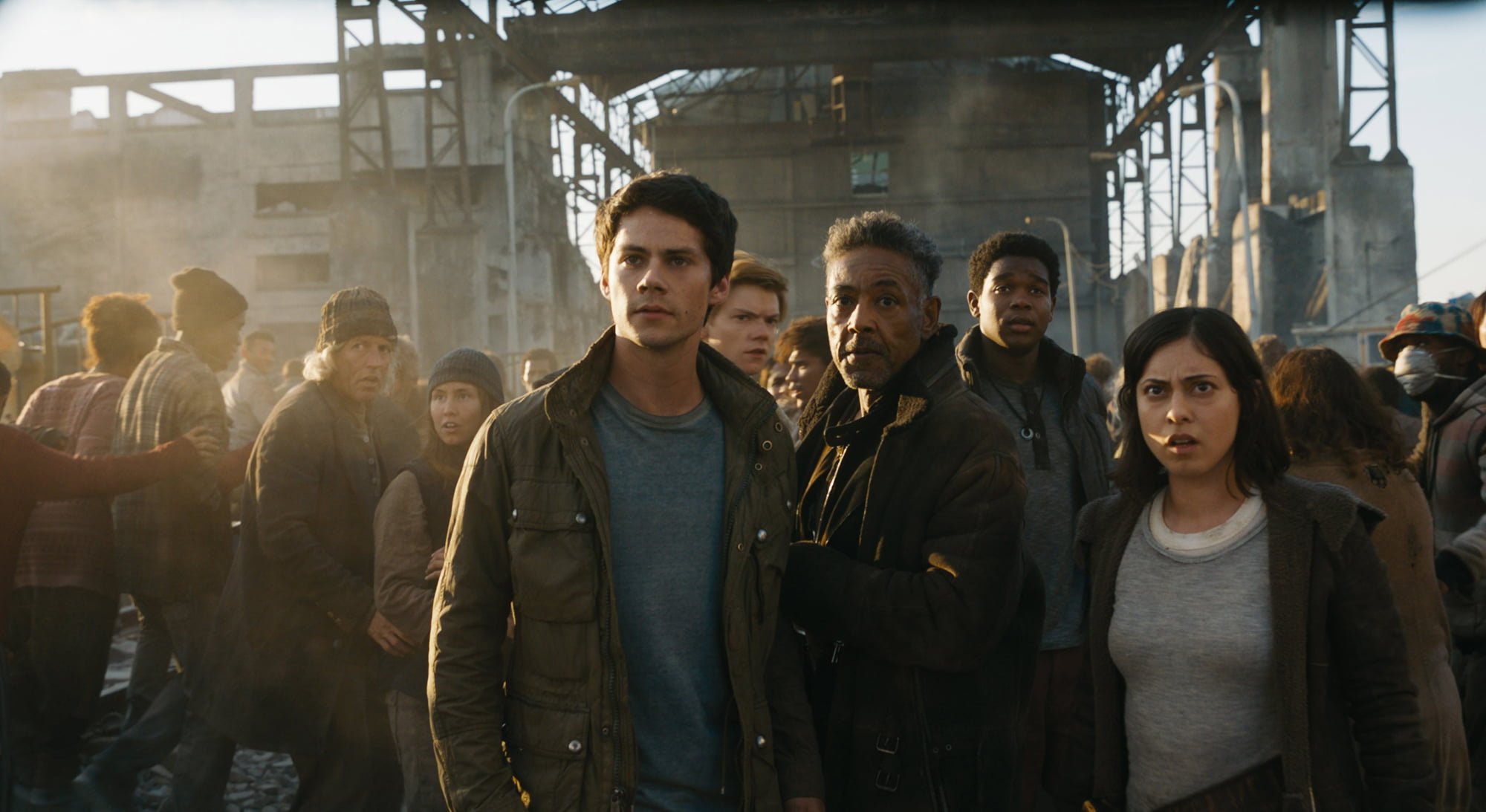 I don’t think I’ve ever been as relieved to see a franchise come to an end as I am to watch the dreadful, idiotic, uninspired, misguided, unentertaining, drab, and borderline offensive Maze Runner cycle reach its hopefully emphatic conclusion. Maze Runner: The Death Cure – a title that barely means a damned thing because there’s no maze, plenty of running, and death doesn’t cure anything except the misery of living through these films – finds franchise helmer Wes Ball and screenwriter T.S. Nowlin wrapping up the insipid adaptations of novelist James Dashner’s already problematic series of young adult adventure stories with somehow even less inspiration and more of a punishing running time than they started with. It’s an ugly, hateful, but inexplicably and globally lucrative franchise that won’t teach anyone anything and will only please teenagers with the lowest of possible standards, and if Dasher or the studio ever thinks of reviving it, I will unequivocally lose my shit.

After a dishwater dull, but not as punishing second entry in the trilogy – one where Ball and company abandoned much of the first film’s overly convoluted mythology in favour of giving the viewer an uninspired thriller about teens and post-apocalyptic survivors battling zombies – Maze Runner: The Death Cure is another movie where teens are forced to arm themselves to the teeth with guns to stop a maniacal mega-corporation from running experiments and tests on the remaining youth in the world in a bid to find a cure for “flare,” or the mysterious disease that turns people into zombies. No one calls them zombies in the film, but let’s just call them what they are. Returning hero Thomas (Dylan O’Brien) finds himself searching for “the last city,” a metropolis that functions as the stronghold for WCKD (still the stupidest name for an evil conglomerate this side of a 60s spy movie) to rescue a captured brother-in-arms (Ki Hong Li) and to get answers out of his turncoat former crush (Kaya Scodelario). hopefully wooing her back to the side of good in the process. Thomas’ resistance fighter buddies – The Gladers – want nothing to do with the mission, but the young man closest friends are willing to do whatever it takes to get their friend back safe and sound and put an end to WCKD’s wicked ways for good.

Maze Runner: The Death Cure musters one obvious, but decent bit of social commentary with a few lines about how the villains think erecting walls are a solution to all life’s problems, but any higher praise that I could lavish upon the film ends there. Ball has gotten better as a filmmaker, but only in the sense that his style has gone from frantic and ugly to adequate and competent. If you like vaguely stylish shots of stock, arid desert landscapes or clichéd futuristic cities and laboratories, Maze Runner: The Death Cure might do something for you in the same way that a bowl of chicken broth holds a basic level of nutrition. It doesn’t take much to mount an ungodly 142 minutes of rambling action sequences and foreboding speeches, and Ball delivers on those rock bottom expectations. The actual thrust of the film around the visuals is far more worthless.

It’s not that I’m necessarily against the fatalist viewpoint held by Dashner’s novels or the films’ bleak world view, but rather that it’s all dull and uninteresting. I’m not even against the fact that this is a film that doesn’t think twice about how it’s built around teenagers mowing people down wholesale with assault weapons. It’s the future and things are fucked up, so I can suspend my disbelief that far.

It’s everything else about Maze Runner’s nonsensical world that has never made sense to me. It’s a world that doesn’t seem like it was ever thought through in favour of just throwing a bunch of shit at the screen to see what sticks and jolts the audience in the cheapest, most brazenly manipulative ways possible. And just like throwing actual shit at a screen, some of it will stick, but all of it will stink. It’s one of the dumbest mish-mashes of clichés imaginable, all told with a stoic sense of seriousness that’s insane to think about. How anyone can be asked to deliver the film’s hokey, foreboding dialogue with any sort of straight face is unfathomable to me, but even more baffling is how Ball, Dashner, and Nowlin refuse to acknowledge how goofy and overblown their premise has become. There’s no sense of camp or fun (outside of one fleeting moment where someone has to literally explain how they cheated death), and the franchise could have sorely used it.

It’s all anchored by Dylan O’Brien, who isn’t one of his generations best performers, but someone I feel genuinely feel sorry for when it comes to their association with this franchise. During the production of this film and following a stunt gone wrong, O’Brien was hospitalized with life threatening injuries and production was halted. I never wish such a thing on anyone and I can’t begin to fathom how terrifying that is for everyone involved with the production, but I especially believe that Maze Runner: The Death Cure isn’t a film worth almost dying over. The fact that O’Brien went so far for a character that’s an uninteresting blank slate from the start of the franchise to the end is worth commending, but I desperately hope that the rest of his career goes a bit more smoothly and fruitfully. He was never given anything to do in these films except run around and seem basically capable in an action film setting. He does what he can, but unless he’s running, there’s precious little for him to do. 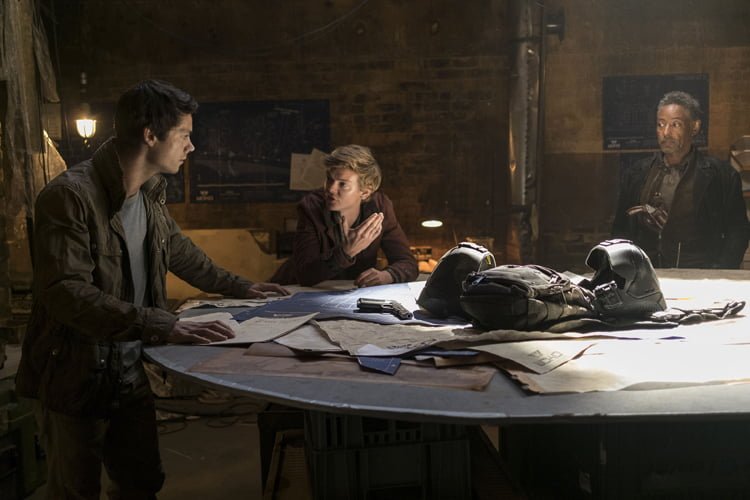 Maze Runner: The Death Cure – a film that I’m not sure is better or worse than the first entry, which says something since that’s one of the worst films I’ve ever seen – is so numbing and dull that my mind started drifting away to a hypothetical conversation with the filmmakers in a bid to try and understand the mindset of anyone who would find this stuff entertaining.

So it all started with this maze. Why was this maze so important?

“It’s there to make the kids afraid.”

Why do we need to make the kids afraid?

“So their blood can be harvested by WCKD to make an antivirus.”

Why does making them scared help to create the virus?

What’s the purpose of the antivirus?

“To stop a zombie-ish outbreak.”

Okay, but how were the zombies created?

Have you tried anything else before this batshit, convoluted plan?

Um, alright, the second and third films don’t even have a maze, but let’s move on. Why is one of the most likable protagonists switched over in an earlier film to be a traitor for seemingly no reason? The character shows absolutely no villainous tendencies even when they’re clearly made to be evil? Also, why is this one of your only female characters, and why is she replaced by an even blander female character?

“Because we love swerves in all forms, bro.”

But why? And why didn’t you answer all of that question?

Okay, so why then in this most recent film do you take one of the most villainous characters in the franchise – WHO WAS STRAIGHT UP MURDERED IN THE FIRST FILM – and make them into not only a hero, but also the only source of much needed levity that this series has ever had?

“Because the fans love that character!”

But you realize it makes no sense, right? I mean, you try to explain why he’s no longer a villain, and I can kinda see it, but his resurrection still feels forced.

Fine, whatever, you’re clearly making an idiotic, contradictory movie, but let’s keep going. Why do you go out of your way here to give the two biggest villains behind WCKD’s plans hints of humanity that won’t go anywhere?

Does the ending of this film solve anything? How can anyone look at the ending of Maze Runner: The Death Cure and think that things are going to be okay in the end?

“Yeah! It’s great, isn’t it? There’s a sacrifice, lots of people are saved, and we prove that science is a load of convoluted nonsense, so you might as well just move to an island with no doctors or help whatsoever. Better to live off the land than be in the pockets of doctors and bureaucrats.”

Could you please tell me that we’re at least done with this?

“I dunno, man. The fans… they clamour for more, and if they want it, they’ll get it.”

That’s a terrifying thought, and I need to stop myself. Maze Runner: The Death Cure only exists because there are genuine fans of the novels and films, and I will never understand why these people can get enthusiastic over such shamelessly manipulative, unimaginative storytelling. Although Maze Runner: The Death Cure is ostensibly the end of the cycle (going out with a pathetic whimper that solves precisely fuck all and amounts to the whole series being a complete waste of time and effort to get though), the door is left open for further adventures featuring Thomas and The Gladers. If I’m thrilled that this is all likely over, I’m terrified at the idea that Ball and company will do another film because they’ve already established the franchise as one that can only sink lower instead of increasing in quality.

And I get it. These movies are for teens, most of whom would like an almost middle aged man like me to get off their lawn and stop shitting on their “fun.” There were plenty of critics who crapped all over films that I loved in my younger years, some of which hold up when I revisit them and some of them that I’m kind of embarrassed for liking in hindsight. To them I say this: once you pass the age of twenty, never attempt to watch Maze Runner: The Death Cure again. Unless you stop watching movies for the rest of your life right now and give yourself no point of comparison, there isn’t a single film in this franchise that will ever remotely stand the test of time. If you want to preserve those memories, kids, never watch them again, and never think about what you consume. I only saw this through out of the perverse, masochistic need to see it through to the end, and I almost guarantee that if you grow up to be any sort of well adjusted human being, you’ll be embarrassed that you ever enjoyed this, and possibly even disgusted in yourself for liking something so fatal, despairing, and artless that it makes 80s slasher films look like bastions of positivity.

Check out the trailer for Maze Runner: The Death Cure: