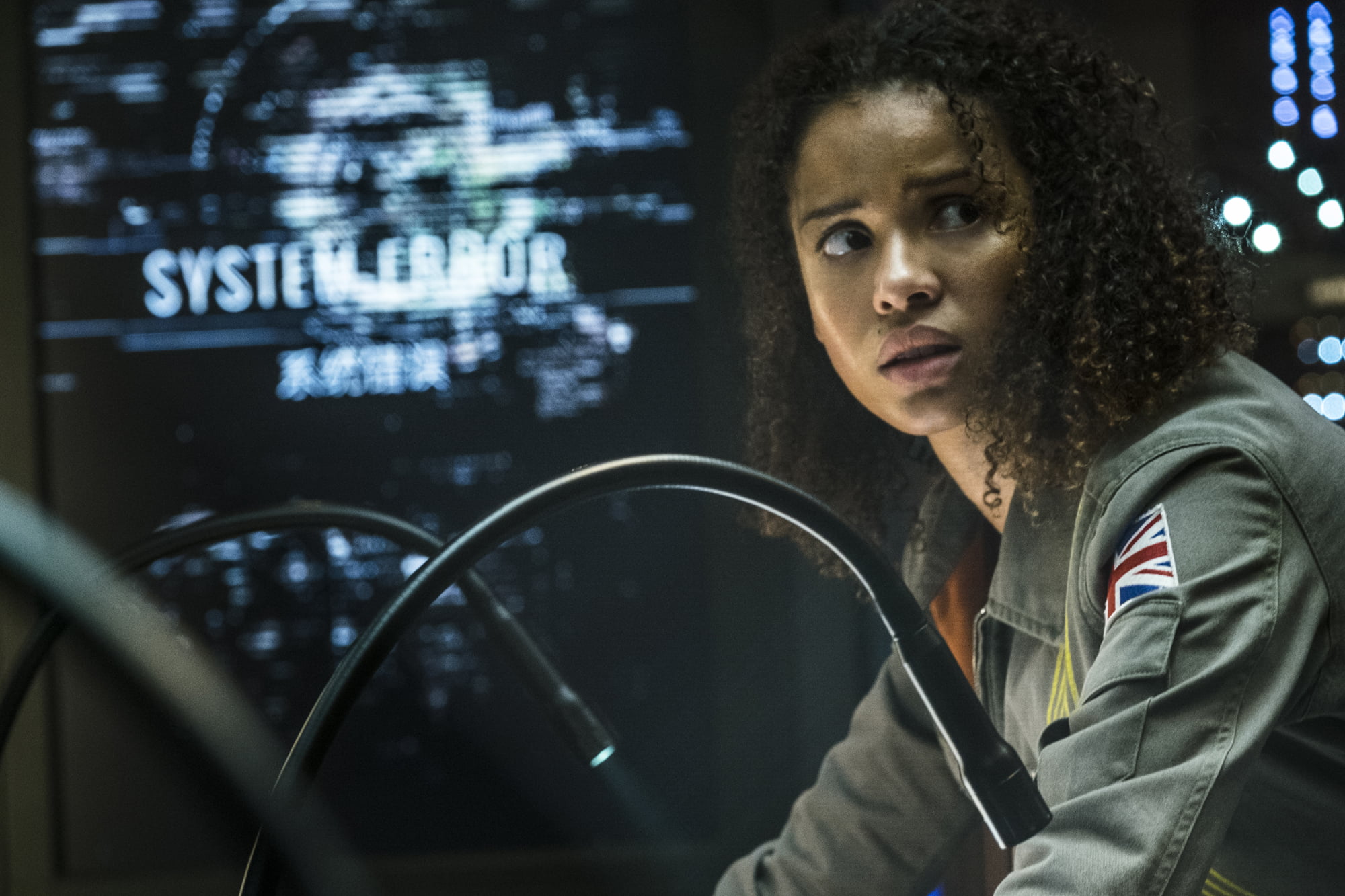 Releasing quickly and with sudden fanfare onto Netflix after people had their fill of football last night, the B-movie sci-fi franchise entry The Cloverfield Paradox is an entertaining, if admittedly unexceptional piece of genre fluff. It’s assuredly entertaining, fast-paced, and well cast – featuring an overqualified team of professionals who could be seen as “slumming it” – but it’s hardly the game changer such hype heralds. It’s just a decent movie that happens to have been shoehorned into a J.J. Abrams produced franchise that values marketing savvy and elliptical breadcrumb trails of connective clues more than any real substance. You know, kinda like Abrams’ Lost, which I am now all but positive will tie into this franchise at some point. But taking that hype and franchise connections out of the equation, The Cloverfield Paradox is fine for what it is: an unpretentious outer space set horror flick.

The latest film from Nigerian-American filmmaker Julius Onah functions more or less as a prequel to the found footage action thriller Cloverfield and the bunker-set psychological drama 10 Cloverfield Lane. Sometime in the future, with the world on the brink of war due to a fossil fuel crisis, a multi-national crew of astronauts are sent into space with the most powerful particle accelerator ever created in hopes that the device could tap into a bottomless reserve of renewable energy. After over seven-hundred days and numerous failed attempts at using the particle accelerator, something catastrophic and unexplainable happens. The ship is badly damaged and knocked so far off course that they can’t see the Earth. They have no means of communication, there’s a mysterious woman who’s suddenly on board the ship who wasn’t there before, and they miiiiigggggghhhhhhhhttttt have ripped a hole in space and time.

You don’t need to stop me if you’ve heard any of the elements I listed above in the description of The Cloverfield Paradox’s plot. I know you’ve heard them before in everything from Alien to Life to Event Horizon to Sunshine to pretty much any thriller set on a space station from the past several decades. The same themes apparent in those previously established sci-fi thrillers are brought in here: “Unknown science isn’t the biggest threat to humans, but human nature IS the biggest threat to humanity,” “We spent so much time talking about if we COULD do this that we never asked ourselves if we SHOULD do this,” “anything that can go wrong will go wrong,” and so on and so forth.

The script from Oren Uziel (22 Jump Street, Freaks of Nature) contains scant surprises, but it’s clear that the writer and Onah have cribbed their ideas from the best sources possible, mounting more of an homage than an outright rip-off. The Cloverfield Paradox escalates swiftly with the sort of “yes, and…” kind of theatricality that B-movies, pulpy potboilers, and improv groups thrive upon equally. Onah’s direction is similarly unsurprising, but functional. The spaceship is sleek; bathed in red and blue flashing lights bouncing off sets that can only look like futuristic spacecrafts and nothing else. There’s some shaky cam, some lens flares, and some canted camera angles for whenever characters are shaken to their core by newfound truths. Bear McCreary’s score swells and pulsates through the action sequences; some of which will involve derring-do, jump scares, gross out moments, explosions, and noble sacrifices. There’s nothing exceptional about the storytelling and craft behind The Cloverfield Paradox, but it’s rarely boring and always efficient. It’s everything most viewers familiar with the genre expect from a film pitched at this level, without deviation. 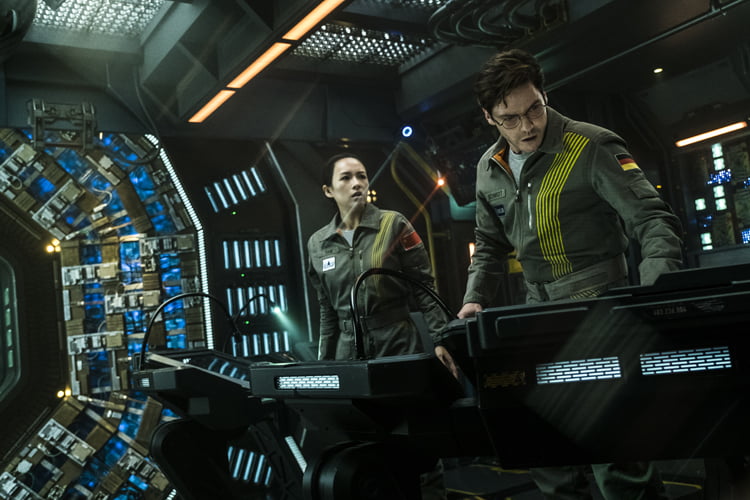 Some fans of such genre exercises might find The Cloverfield Paradox tiresome and disingenuous when one considers how inorganically this script has been retrofitted to conform to a larger franchise. But part of the joy of the Cloverfield saga thus far comes from the low-key and simplistic nature of the previous entries. Both Cloverfield and 10 Cloverfield Lane were solidly produced variations on themes that had been done countless times before. Outside of connecting these stories to “a larger cinematic universe (TM),” they were – at their core – run of the mill B-movie fodder, and while The Cloverfield Paradox boasts a slightly larger budget than its predecessors, the “if it ain’t broke, don’t fix it” mentality remains the same. It’s a film that trades openly in clichés, but at least Onah knows what to do with these often silly, overused tropes to fashion something entertaining out of them. Onah also refuses to take this material too seriously, infusing the material with some cheeky body horror, a moment where a foosball table goes apeshit, and a clever moment where someone’s arm gets stuck in a different dimension. Onah knows that The Cloverfield Paradox can be seen as something silly, but everyone involved does what they can to make sure that the silliness and scares stay balanced.

Another big point of appeal is the ensemble cast, headed up by de facto protagonist Ava Hamilton, played by Gugu Mbatha-Raw, a talented actress deserving of more (and better) leading roles like this. She’s the protagonist mostly because she has a shred of a tragic backstory (which extends to an unnecessary, Earthbound subplot involving Ava’s husband). Raw has more to work with than her co-stars, but Onah has stacked the cast with more than enough talent for her to interact with, including David Oyelowo as the ship’s captain, Elizabeth Debicki as the mysterious stowaway, Daniel Brühl as a potentially treasonous German scientist, Chris O’Dowd as the comic relief tech guy, John Ortiz as the religious astronaut, and Zhang Ziyi as the token Asian character (who’s also in love with Brühl’s character). None of them are able to match the depth of Raw’s performance and character, but they all seem like good enough sports to play along. No one looks bad, everyone hits their marks, and it all holds together like the piece of assembly line product it is; one where the ingredients are fine and the final result is exactly what you thought it was going to be when you started.

The Cloverfield Paradox was originally slated to be a theatrical release from Paramount Pictures. The release date bounced around a bunch of times before disappearing from sight until last night’s Netflix debut. It feels like the right decision was made, and that Netflix should be the home for any future Cloverfield entries. While Onah’s visuals might look better on the largest screen possible, the story and its obvious unoriginality plays better at home. I might be damning the film with faint praise by calling it unoriginal, but while I can admit that I’ve seen this kind of thing done better and smarter and on a larger, more ambitious canvas, I can’t say I wasn’t entertained. Onah, his crew, and his cast have made something watchable and jaunty out of wafer thin material, and I assume any future entries into this franchise – secret or otherwise – will likely fare the same.

The Cloverfield Paradox is now streaming on Netflix.

Check out the trailer for The Cloverfield Paradox: