While far from director Clint Eastwood’s best or worst film, The 15:17 to Paris is a fascinating, almost experimental examination of the filmmaker’s best and worst impulses. Firmly a mixed bag, this biography centering around a trio of Americans who thwarted an intended terrorist attack aboard an Amsterdam to Paris train in 2015 has a lot to love and just as much to leave viewers scratching their heads.

During their childhood, Spencer Stone, Alek Skarlatos, and Anthony Sadler formed a life long friendship that survived even when they went off in different directions as adults. Spencer joined the Air Force with the intention of becoming a member of the armed forces’ elite rescue corps. Alek joined up with the National Guard, seeing a little bit of action in Afghanistan as a “glorified security guard.” Anthony just sort of stayed behind and lived his life like an average American, but never lost touch with his buddies. They all reunited for a backpacking trip across Europe that would change their lives forever.

In order to have a proper understanding of The 15:17 to Paris, viewers will need some sort of familiarity with Eastwood’s manner of direction. Without this prerequisite, The 15:17 to Paris will seem jingoistic at best and inscrutable at worst, especially given that the three leads are the real life figures behind the story and not polished, professional actors. It’s not a film that can be approached cold.

Eastwood rarely does multiple takes of scenes. It’s either done right or decently the first time, or it’s not done at all. Similarly, when he gets a script, he refuses to have a word of it rewritten or altered. What’s on the page from the first draft he’s handed is gospel and nothing is to deviate from the original vision in the head of the writer. What Clint does can be seen as somewhat noble. He’s an auteur who values instinct and first impressions over rigorous rehearsal and manipulated sentiment. He’s also quite lovingly one of the few directors who holds a screenwriter’s thoughts higher than his own.

Sometimes Eastwood’s convictions and work ethic lead to uneven, sometimes amateurish final products, but The 15:17 to Paris, while certainly the former, is definitely not the latter. While the decision to allow Stone, Sadler, and Skarlatos to play themselves was a bold one that doesn’t fully pay off in any sort of performative sense (despite Stone in particular being very good), it does find Eastwood clutching at some intriguing, potentially unanswerable questions about the nature of human existence. The 15:17 to Paris isn’t so much a film about American exceptionalism (as evidenced by a humorous scene in Germany where a tour guide rips into the California born travellers for thinking that the U.S.A. saves the world every second of every day), but rather a look at how a human life is full of formative, initially inconsequential moments that link together in extraordinary ways.

The 15:17 to Paris is the closest that the aging Eastwood has or probably ever will come to making an ethereal sort of film along the lines made by fellow countryman Terrence Malick. The thematic and subtextual overview of The 15:17 to Paris is consistently fascinating, but Eastwood also isn’t equipped to make a film as weird and beguiling as Malick. Also, like Malick, Eastwood furthers his stunt casting by peppering the film with a lot of familiar faces playing well against type. Some of them – like Judy Greer as Spencer’s supportive mother and Thomas Lennon as the boys’ Catholic school principal – acclimatize well to Clint’s style. Others – like Tony Hale as a gruff physical education instructor and Jaleel White as a history teacher – look lost at sea in their brief, but distracting roles. And the less said about Jenna Fischer’s tone deaf, unassumingly campy performance as Alex’s devout mother the better. She’s a capable performer, but unwatchable and cringe-worthy here. 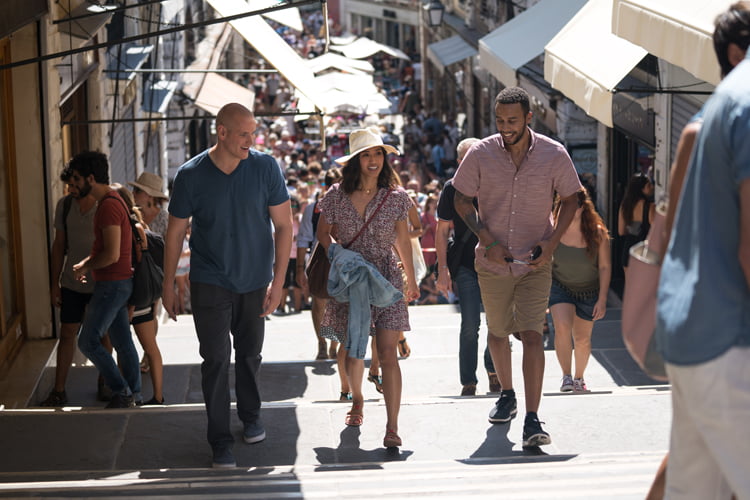 Eastwood also doesn’t direct children well, which makes the first thirty minute of The 15:17 to Paris an annoying slog that makes one pine for the non-actors to arrive and take control. While the kids portraying young Spencer, Alek, and Anthony are professionals, they all seem like they’re inhabiting different films, boasting very little chemistry with one another that can sell such a life long friendship. These young actors’ styles and methods – which they’re still learning, so I won’t be hard on them – clash wildly, and Eastwood doesn’t care to do a single thing about it. It’s the fault of the director, not the performers, that The 15:17 to Paris gets off to such a dreadful start.

But once the real life Skarlatos, Sadler, and Stone are given a chance to shine, things relax a bit more. Clint keeps the style simple, favouring hand-held, intimate cinematography over elaborate set-ups to foster a sense of naturalism that will make his inexperienced leads comfortable recreating events that would lead to a major trauma in their lives. Through this naturalist approach, I was struck by the wealth of empathy Eastwood displays. While some might take The 15:17 to Paris to task for recreating almost every fun loving stop the trio had on their trip, I realized early on that Eastwood is charitably trying to give these young men a chance to get some happy memories from a trip that quickly turned sour. Eastwood allows his heroes to recontextualize their journey and explore their feelings in a safe space. The 15:17 to Paris in its best moments is like being privy to an intimate therapy session that allows real people to decompress in a semi-realistic setting.

And Clint also wisely eschews his previous viewpoints that the kids of today are mollycoddled brats, even going as far as to show the strength of single mothers and embracing youth culture instead of outwardly mocking it. This might be because two of the three heroes at the heart of The 15:17 to Paris served time in the armed forced, but Clint never shies away from letting these young men be themselves. They love video games, shooting off air rifles in the woods, talking about football like they know something about the sport that the professional players don’t, they have selfie sticks, and they have no clue how to handle their liquor. Eastwood even becomes the latest filmmaker to set a montage to an Imagine Dragons song during a scene where Spencer is training for a future military position. Eastwood knows to let these kids be kids, even if adorning the military obsessed Spencer’s bedroom with posters for Kubrick’s Full Metal Jacket and his own Letters from Iwo Jima feels completely out of place, indulgent, and laughable.

Clint’s “one and done” style of direction isn’t the biggest problem with The 15:17 to Paris, but his stringent and slavish adherence to first time screenwriter Dorothy Blyskal’s script almost kills any sort of good will. Working from the book written by the leading men and Jeffrey E. Stern, Blyskal certainly offers a lot of thoughtful material for Eastwood to explore, but the structure is a mess and the dialogue – which has to be read word for word, both because of Eastwood’s style and the choice of non-actors for leads – is robotic and forced. Blyskal’s story features a framing device that keeps shunting the viewer back to the events aboard the Thalyn train #9364, and that constant reminder of the impending significance of Anthony, Alek, and Spencer’s lives destroys the thematic momentum that Eastwood is grasping for in the first place. It’s a hack plot device that could have been fixed along with the dialogue if Eastwood was ever content to step out of his strictly adhered to comfort zone.

Many academics now speak of Eastwood as an auteur that can be held in the same curiously fascinating regard as some of the greatest directors to ever live. While being talked about in that company is certainly warranted and complimentary, that doesn’t mean that all of Eastwood’s projects will be easily accessible or successful. While I don’t like everything about The 15:17 to Paris, it’s certainly more intriguing to think about than many of Eastwood’s more recent and more commercially successful efforts, and more fascinating than any number of other studio produced efforts getting dumped in the middle of winter. It will probably be dismissed by many critics and audience members, and often with good reason, but it’s a film worth wrestling with before dismissing it.