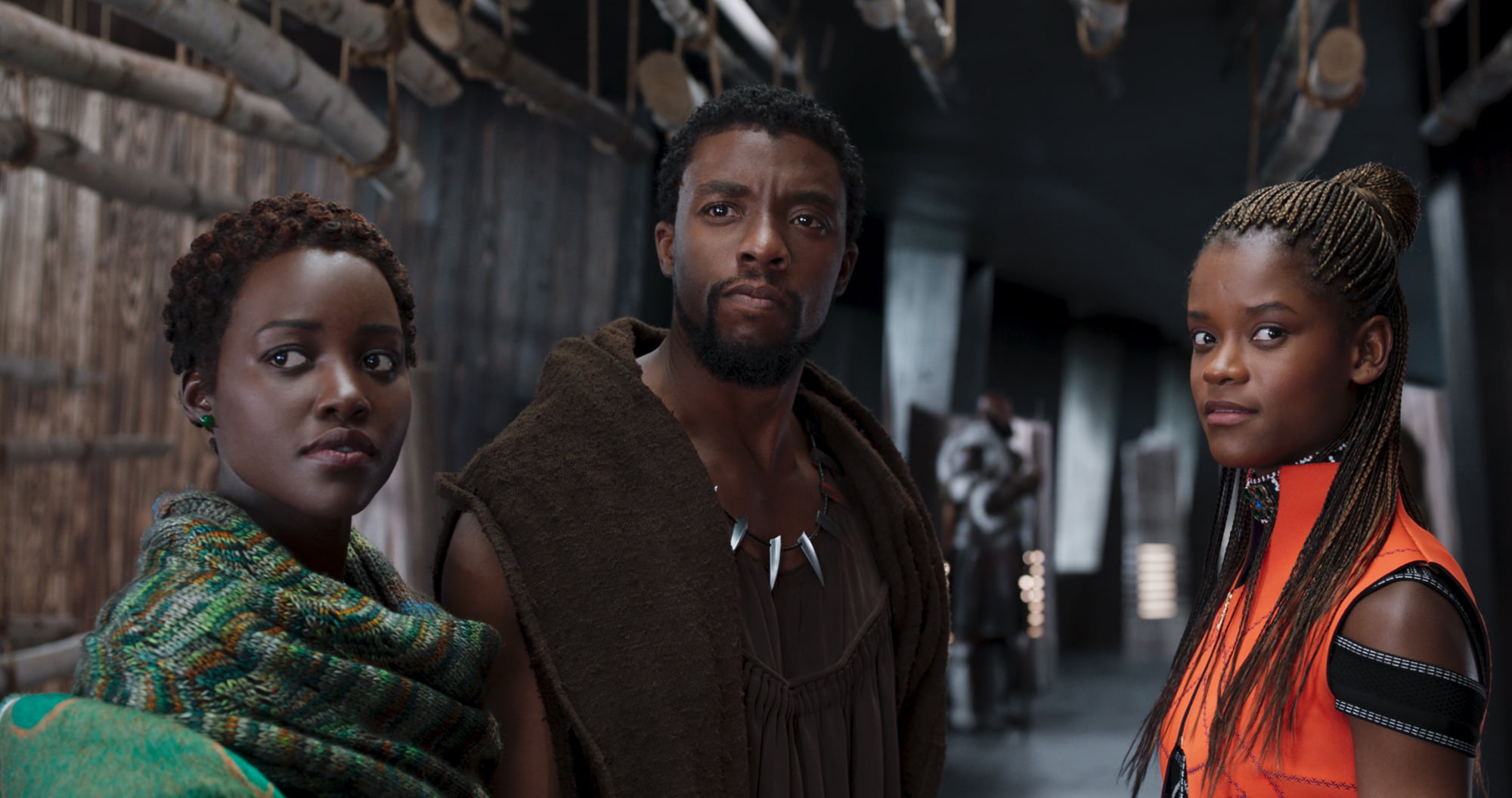 Destined to become an all time classic of the superhero genre and handily the best entry into the behemoth Marvel Cinematic Universe, Black Panther is a patient, intelligent, emotional, and politically loaded film that uses previously established tropes and clichés to brilliant, revolutionary effect. Bits and pieces of Black Panther will be instantly recognizable to anyone who has previously sat through a Marvel movie in the past fifteen years, but director and co-writer Ryan Coogler adapts them to fit a familiar story told from a fresh, bold, and unflinching perspective. It’s a spot on blend of the radical and the familiar, and as close to a perfect film as superhero yarns have ever gotten.

Heir to the throne of the fictional, wealthy, and secretive African nation of Wakanda, T’Challa (Chadwick Boseman) finds his country at a crossroads in their history. With the world becoming an increasingly dangerous place, T’Challa has to help his people decide if their mining based economy and ingenious technological and medical advances should be shared with outsiders. Some within the country fear that T’Challa’s late father brought the country to imbalance, favouring technology and gadgets over the survival skills that have allowed the people of Wakanda to stay hidden from the public eye. Some see profit to be made from sharing their secrets. Others take the current American viewpoint that protectionism and isolation from the rest of the world will prove to be their best defense. Before the understandably overwhelmed T’Challa can figure out any sort of diplomatic resolutions to Wakanda’s problems, an evil mercenary from his father’s past (Andy Serkis) and a political rival with a personal vendetta (Michael B. Jordan) surface to create the new leader’s biggest challenge to date. Entrusted with the power of the Black Panther – derived from an indigenous flower that makes whomever ingests it faster, stronger, and impervious to pain and bodily harm – T’Challa not only has to fight to keep the throne, but to protect his country during its most vulnerable time of need.

Coogler (Fruitvale Station, Creed) and co-writer Joe Robert Cole start from a patient storytelling perspective. Working with a predominantly black cast and crew (something sadly unheard of for a production of this size and scale), Coogler wants to introduce viewers not to just another place in the already sprawling, overblown universe, but to two vastly different places that haven’t been seen in a superhero film before.

The film opens with a scene set in Oakland, California in 1992, a noteworthy place and time that will frame the narrative and political stage for everything to follow, and a location where few would expect a superhero film to start. Black Panther introduces an intelligent, thoughtful, and subtle through-line about being an impoverished African-American that will increasingly and daringly portray T’Challa as a hypocrite who needs to learn the art of being a selfless leader by comparison. The Marvel films have previously done this with the similarly minded Captain America films, but instead of Cap’s problems starting unwittingly during World War II, T’Challa’s start unwittingly in the same years as the racially resonant L.A. riots. This opening is just a taste of the emotionally wallop that’s due to follow, and a hint that Coogler and Cole aren’t interested in another simplistic good versus evil narrative.

From there, Coogler spends a lot of time making sure that viewers get a feel for Wakanda as a place. In some films set in instantly recognizable cities like New York and Chicago, a joke can easily be made that the geography and architecture contained within the story settings functions as a character on par with the leads. Black Panther doesn’t really have that kind of shorthand to work from, considering that much like Marvel’s Guardians of the Galaxy films, the story will be starting in a fictional place that hasn’t been glimpsed on screen before. The first third of Black Panther isn’t devoid of action or suspense, but it’s also taking its time to let viewers know why Wakanda is a place worth defending and fighting for. The actual moving parts of Wakanda – the “vibranium” based economy, sleek, flying transports, astounding medical care – aren’t anything new for the superhero genre, and they’re technically accomplished, but also the least impressive aspects of Coogler’s vision.

Far more intriguing and nuanced is the amount of time Coogler spends with the people of Wakanda who all hope to have a piece of T’Challa’s powerful ear: military leader W’Kabi (Daniel Kaluuya), warrior Okoye (Danai Gurira), intelligence operative and sweetheart Nakia (Lupita Nyong’o), elder Zuri (Forest Whitaker), tech genius Shuri (a scene stealing and star making turn from Letitia Wright), tribal rival M’Baku (Winston Duke). Black Panther does something in its early moments that’s just as revolutionary as its predominantly black casting. It’s a film where none of the side characters are thankless or thinly drawn, save for Martin Freeman, who pops up as a helpful, but thinly drawn white CIA agent in one of Coogler and Cole’s subtlest jokes. Each of these characters expresses their concerns and grievances to T’Challa, and through their perspectives the viewer is given the keys to Wakanda’s everyday way of life. Coogler has created a fictionalized political system for Wakanda, but has also found a way to show that the political leanings of every character are based in personal opinions and fears. Part of what makes Black Panther so exciting to watching during the film’s second half is remembering that none of these people are on the same page, and that T’Challa’s tenuous position of power exists within a vacuum at the moment. All of these characters are memorable, exceptionally performed, and given equal footing to the hero. It makes Black Panther inviting to the viewer, fostering a sense of inclusivity that goes beyond its casting.

Having well rounded characters and substantive material means that Coogler is able to imbue Black Panther with a bit more grit, realism, and grime than most other films in the franchise. The violence is occasionally brutal and unflinching by populist Marvel standards, but it fits the story and its profiteering villains perfectly. The early scenes of hand-to-hand combat are a little shaky, which is unusual considering that Coogler just came off of Creed, which had some of the most memorable boxing sequences committed to film. An early ambush sequence set in the jungle in the dead of night is so under lit that it’s hard to see what’s going on, and an early ceremonial fight for power between T’Challa and M’Baku is edited to within an inch of its life. These missteps are quickly rectified for the rest of the film’s show-stopping set pieces, albeit with a couple of instances of dodgy CGI that distract from otherwise outstanding scenes. 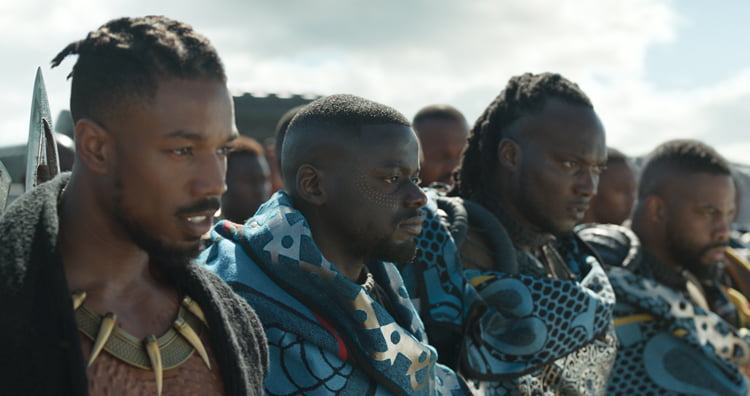 After establishing Wakanda as a place worth fighting for, Coogler gently switches gears and makes T’Challa a Bond-like undercover hero, replete with gadgets, debonair style, and smooth talking personal skills, and the always reliable Boseman eases into these aspects of the role like he’s sitting in a comfortable armchair. Clearly relishing his character’s status as a complex, but stylish and powerful leading man, Boseman displays a perfect balance of power and unknowing vulnerability. At its heart, Black Panther is about the danger of secrets getting passed down secretly across generations, and the bulk of Boseman’s dramatic heavy lifting will come as a result of these truths coming to light at the worst possible time. Boseman has to start off Black Panther depicting T’Challa as a hero before transitioning to the more dramatically satisfying story of what it takes to be a leader. It’s a storyline that the Marvel universe has tried several times before, but never to the effect that Black Panther has, and a lot of the credit has to go to Boseman.

But a hero is only as great as the villain he’s paired against, and Jordan’s Erik Killmonger will go down as an all time great. Swaggering and boasting a huge chip on his shoulder, Jordan’s baddie is kind of hard to talk about without spoiling the film’s biggest reveal, which occurs around the halfway point. It’s kind of a predictable twist, but one that’s handled expertly thanks to Coogler’s bold direction, the tight script, and Jordan’s note perfect performance. Good villains are ruthless, cunning, and arrogant, and Killmonger is certainly all of those things, but the best villains are the righteous ones that might have a point about the heroes that needs to be taken into consideration. At times, Killmonger can be seen as being completely justified in his actions, and his crusade, while narrow minded, is sympathetic. It’s through this character that Coogler’s patience in the earlier parts of the film pays off. Here’s a character who offers a rebuttal to anyone who thinks Wakanda is an idyllic paradise of wealth and opportunity, and his feelings are presciently valid on the basest of levels. Jordan balances these extremes with expert precision, offering a perfectly terrifying counterpoint to Boseman’s heroism. In superhero movie history, Jordan’s performance as Killmonger belongs in the conversation alongside Heath Ledger’s Joker and Alfred Molina’s Dr. Otto Octavius as the best villain of all time.

It’s Jordan’s character motivations and performance that I’m sure most savvy viewers will dwell upon once the film ends, but it should also leave audiences intrigued and excited by the prospect of future Black Panther films. It will definitely catapult everyone involved to more high profile work in the future, and while the superhero genre has become overstuffed already as it is, it’s nice that this functions as a standalone film that’s almost totally divorced from the upcoming Avengers: Infinity War juggernaut. I was growing increasingly tired of Marvel’s seemingly endless world building, but I have to credit Coogler and company greatly for creating a world that I would want to return to in a heartbeat.

Check out the trailer for Black Panther: