Although it’s purposefully abrasive and assuredly made with bad taste connoisseurs in mind, writer-director Brian Taylor’s gleefully deranged horror-comedy Mom and Dad is a chaotic blast from start to finish. A work of maximum gusto and just enough smarts to not appear brain-dead, Mom and Dad will leave most viewers cringing and cackling in equal measure.

The plot of Mom and Dad is kind of like and upgrade of the Stephen King dud Maximum Overdrive, but replace killer trucks and electrical appliances with parents run amok. For some unknown reason, parents around the world triggered by the mere sight of their children have become homicidal maniacs. They don’t want to kill all the kids in the world, just their own kids. This spells doom for young and sensitive Josh (Zackary Arthur) and his surly, rebelling teenage sister Carly (Anne Winters), as they have to stay one step ahead of their bloodthirsty parents, Brent (Nicolas Cage) and Kendall (Selma Blair). On the bright side, the newfound killer urges have brought the drifting couple closer together. On the downside, Josh and Carly need to fight their own parents to stay alive.

While most of the coal black, but cartoonishly goofy humour contained within Mom and Dad is meant to turn stomachs, push boundaries, and make viewers giggle uncomfortably, it’s probably the most accessible work from Taylor to date, a filmmaker who went a lot further with his fast paced editing and chaotic style of shooting with former collaborator Mark Neveldine on the Crank films and Gamer. A lot of Mom and Dad still plays like a cocaine and LSD fuelled fever dream, but it’s also a lot leaner and less mean than Taylor’s previous works. It’s a throwback to trash classics of the 70s and 80s that wants to get in, have a good time, and get out before the audience has been pushed too far, preferring sympathetic characters in grotesque situations instead of blanket amorality and excess. While the subject matter is bleak but played for laughs, Taylor also cuts away from most of the film’s implied grotesquerie, only showing exactly what he has to instead of everything that he could be showing the viewer. It’s the perfect balance of gross and restrained that has eluded the filmmaker in the past, and horror seems a better fit for Taylor than the action genre once did.

Every character in Mom and Dad has a dark side, and deep down there’s always a desire to believe that these aren’t irredeemable people, but rather everyday folks caught up in something violent and inexplicable. Winters and Arthur make for likable protagonists, and Cage and Blair display a great deal of chemistry as a loving couple, warring spouses, and homicidal co-conspirators, depending on what the script requires of them. Blair, in particular, gets plenty to work with, as watching her character initially fight her growing urge to murder offers more tension than any number of Taylor’s cat and mouse theatrics. 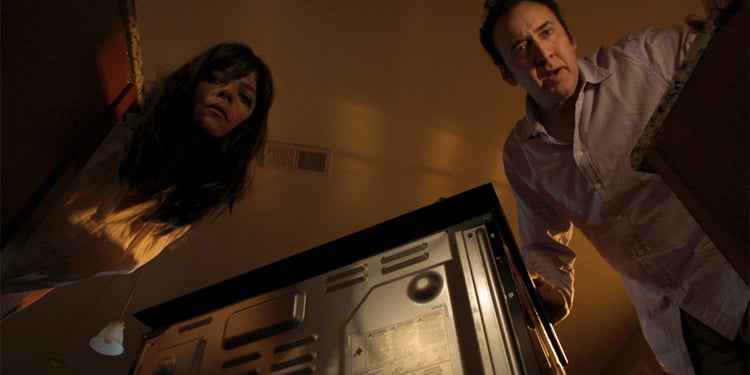 From time to time, Taylor’s story will smash cut to flashbacks that detail these characters in greater depth. These moments often appear out of nowhere, with Taylor handling them like jump scares. In one of the film’s most hilarious moments, one of these abrupt flashbacks gets interrupted by an actual moment of shock. It’s a unique way to give a film this over-the-top a sense of genuine depth and investment. Taylor, a filmmaker well versed in shock and schlock, could have easily coasted on his visual blend of swoops, whip-pans, and canted angled and the eccentricity of a classically unhinged Nicolas Cage performance (one that includes him destroying a room to the tune of the “Hokey Pokey” and another where he creepily reminisces to his young son about how much he loves his Pontiac Thunderbird). Instead, Taylor wants viewers to feel something deeper than being repulsed, aghast, and more than a little intrigued by everything that’s going on.

Sure, there are plenty of laughs to be had at the sight of Cage doing or saying just about anything, unusual musical cues courtesy of Mr. Bill’s cheeky musical score that uses atypical musical cues as signs that doom is around the corner, bizarre cameos, a climactic twist that kicks things into an even higher gear, and the most inspired/inappropriate use of Roxette’s “Must Have Been Love” that’s ever been attempted. But amid all this controlled chaos, Taylor has a message to deliver about how families function in a consumer driven American economy, and how that enhances the way that parents can secretly resent their kids for ruining their lives.

At one point in Mom and Dad, Taylor literally spells out the film’s theme on a classroom wipe-board, and that’s all the viewer really needs to know to understand the filmmaker’s succinct point of view. Instead of running all of his set pieces and ideas into the ground, Taylor only allows himself 84 minutes of mayhem to let it all unfold. It’s a bit like watching someone attempting to hammer a single nail for an extended period of time before the person doing the hammering gives up to find cooler things to do with the tools at their disposal. That might not sound like I’m selling the film with high praise, but trust me when I say that Mom and Dad works, and it’s highly satisfying.

Check out the trailer for Mom and Dad: