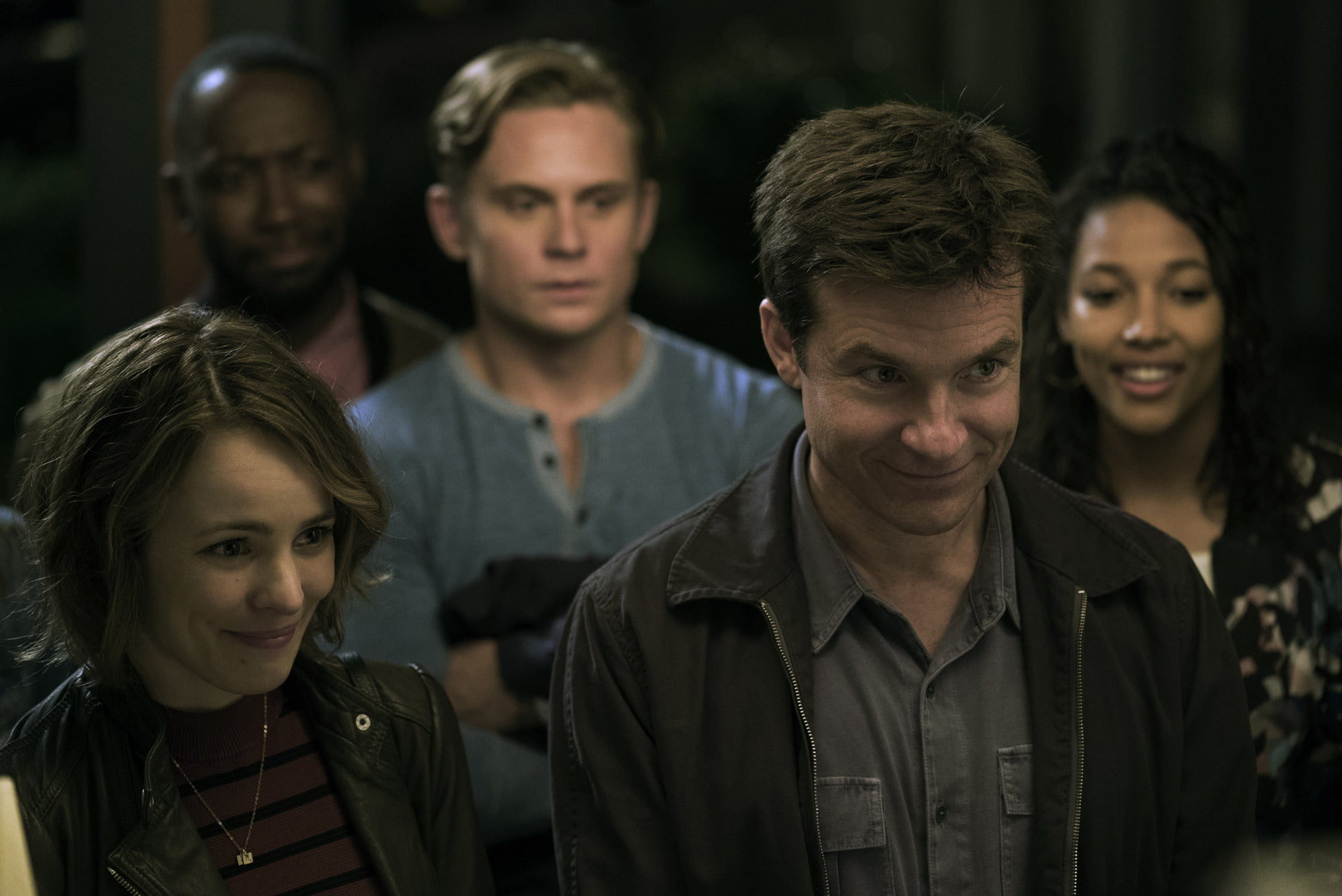 Although it’s built upon an outrageous and patently implausible plot that won’t appeal to viewers looking for anything remotely resembling realism, the dark comedy Game Night will appeal to anyone willing to unplug for 100 minutes in service of some strong belly laughs delivered by an expertly cast group of actors. I never believed for a single second that anything transpiring in Game Night could ever happen, nor did I believe that even if these events were to happen that they would play out as chaotically as this, but I could state with absolute certainty that I was having a blast watching a bunch of incompetent, competitive doofuses get themselves into increasingly convoluted, grotesque, and outlandish situations.

The doofuses in question are Max (Jason Bateman) and Annie (Rachel McAdams), a hyper-competitive married couple who host a group of friends on a regular basis for a game night. They’re routinely joined by Kevin (Lamorne Morris) and Michelle (Kylie Bunbury) – a married couple that’s been together since junior high – and Ryan (Billy Magnussen), a shallow moron who uses the get-togethers as a chance to impress attractive dates that are somehow even stupider than him. The group dynamic of the besties and the hosts’ mental well-being are challenged by the return of Brooks (Kyle Chandler), Max’s arrogant, flashy, successful, and over-confident older brother. Max, who has never beaten his brother at any game or sport in their lives, agrees to take Brooks up on his offer to host a future game night. Wanting to spice up the usual array of board games and charades, Brooks ponies up a considerable amount of money so the players can partake in a kidnapping/murder mystery role playing adventure. But just as the game is afoot, Brooks’ shady past comes back to haunt him, and he somehow gets kidnapped for real, meaning the unsuspecting players are put on the trail of an even more convoluted mystery with life or death consequences.

Game Night marks one of the few times that directors John Francis Daley and Jonathan Goldstein (who previously directed Vacation, but wrote Spider-Man: Homecoming and the Horrible Bosses films) are working from material they didn’t create themselves. Working from a script courtesy of Mark Perez (Accepted, The Country Bears), Daley and Goldstein seem a lot less encumbered and scattered than they did with their last outing as directors. Wisely ignoring the rampant inconsistencies and logic jumps needed to buy into the constantly shifting twists and turns of the Game Night screenplay, Goldstein and Daley place emphasis on performance, comedic timing, and visual accomplishment. It’s truly a coming out party for the directorial tandem, and a nice encapsulation of what the duo can do behind the camera. The cast and witty barbs are enough to make Game Night entertaining, but Goldstein and Daley elevate the material to something much better than one would expect.

Daley and Goldstein stage Game Night as a playful sort of thriller instead of a slapstick comedy, right down to the use of John Carpenter’s signature font style over the closing credits and hiring frequent Nicolas Winding Refn composer Cliff Martinez to provide the surprisingly intense musical score. The set-pieces in Game Night are staged with maximum action movie gusto, including a handful of decent car stunts, an elaborate game of keep-away with a Faberge egg that’s designed nicely to look like a single long take, and a cleverly blocked brawl in a kitchen between Chandler and some baddies. While the narrative intensifies functionally but implausibly, Daley and Goldstein show their dexterity when it comes to escalating the action within individual scenes. They even deliver a novel way to transition between certain sequences, by starting with soft focus, wide shots that look uncannily like piece of a board game before slowly moving in on the action. It’s not exactly a mind-bender of a film, but it’s definitely accomplished, proving that Daley and Goldstein understand that comedy and tension are both in the details. 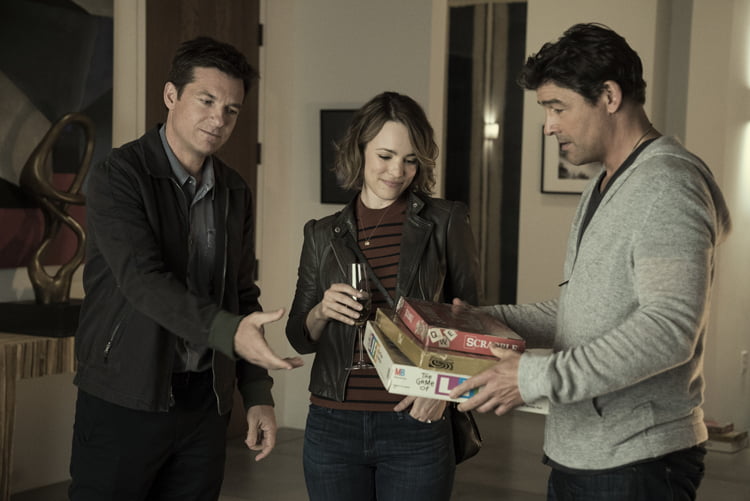 Daley and Goldstein’s mastery of timing and escalation obviously help the comedic beats of Game Night hit the mark more than they miss. They love to drag out a joke to its most extreme punchline – as evidenced in a hilarious scene where Magnussen’s imbecilic bro-type pathetically tries to bribe the fake game’s creator (Chelsea Peretti, who can do more in a single scene than most actors can do in an entire film) – but they know that they can’t drag out the plot any further than it has already gone. They take the thriller elements as seriously as they can, and they allow the comedy to be as crazy and borderline experimental as they possibly can. There are some gross out moments involving bullet wounds, tiny white dogs covered in blood, and a running gag involving a bizarre sex act, but they’re staged in creative and unusual ways. The script might think its smarter than it actually is, but Daley and Goldstein are injecting the film with a true sense of ingenuity.

Daley and Goldstein also know when to defer to their highly qualified and fully committed cast. Bateman is fine in exactly the smarmy, snarky type of role that he normally gets cast in, but here he’s allowed the room to be more generous to his equally outlandish cast-mates. McAdams, in what might be her first full on comedic turn since Mean Girls, is a revelation, bouncing around like hyperactive, know-it-all pinball. Almost every line out of her mouth gets a laugh, and the same could be said of her remarkably wide array of facial expressions. She’s clearly relishing every second of her performance in Game Night. Similarly embracing the chance to play against type is Chandler, normally known for goody-two-shoes roles but playing an irredeemable, charismatic slimeball in this. Magnussen is quickly becoming someone that I look forward to seeing in every film, even if he’s usually cast as an airheaded frat boy type. Like Bateman, Magnussen has been hired to do a job the actor could probably do in his sleep by this point, but he still gives everything he has for the cause.

But while McAdams, Magnussen, and Chandler are able to command every scene they’re in, it’s Jesse Plemons who runs off with the film in only a handful of scenes as Max and Annie’s recently divorced, socially maladjusted police officer next door neighbour. Always petting his dog, doting on his ex-wife, and generally overstepping his boundaries, all without raising his voice from a monotone, Plemons is the embodiment of Game Night’s tonal shifts. It’s a little creepy, sometimes gross, often unnerving, and always captivating and hilarious. It’s a character and a performance that feels effortless and calculated at the same time, and one that refuses to be upstaged in a film full of outlandish characters and even crazier narrative swerves.

But not everything about Game Night is as engaging as the performances, direction, and individual set pieces. Nearly every subplot involving the players’ personal lives falls dreadfully flat. Max and Annie trying unsuccessfully to conceive a child feels tacked on and clichéd. Kevin trying to figure out what celebrity his wife slept with while they were on a break adds nothing, and gives Morris and Bunbury little more to do than to stage the same interrogation scene between the two of them several times over, en route to an uninteresting payoff. The only subplot that works is watching Ryan trying to match wits with his latest game night date, Sarah (a wonderfully droll Sharon Horgan), the first women he’s ever dated that’s vastly smarter than him. Unless Magnussen and Horgan are discussing their lives, butting heads, and endearingly flirting with each other, everyone else’s shallow, underwhelming character depth slows the otherwise briskly paced Game Night into brief lulls of disinterest.

But thankfully those slow spots are fleeting, and more often than not Daley, Goldstein, and the cast have a few hidden comedic cards up their sleeves. Most importantly for a comedy, the jokes and high spots contained within Game Night are strong enough to make viewers want to watch it a second time to make sure they didn’t miss anything during their initial watch. I suspect that the plotline and the film’s multiple fake out endings and obviously unlikely twists won’t hold up nearly as well on repeat viewings, but there’s no denying that Game Night serves as a breezy bit of entertainment that delivers more than its premise might suggest.

Check out the trailer for Game Night: