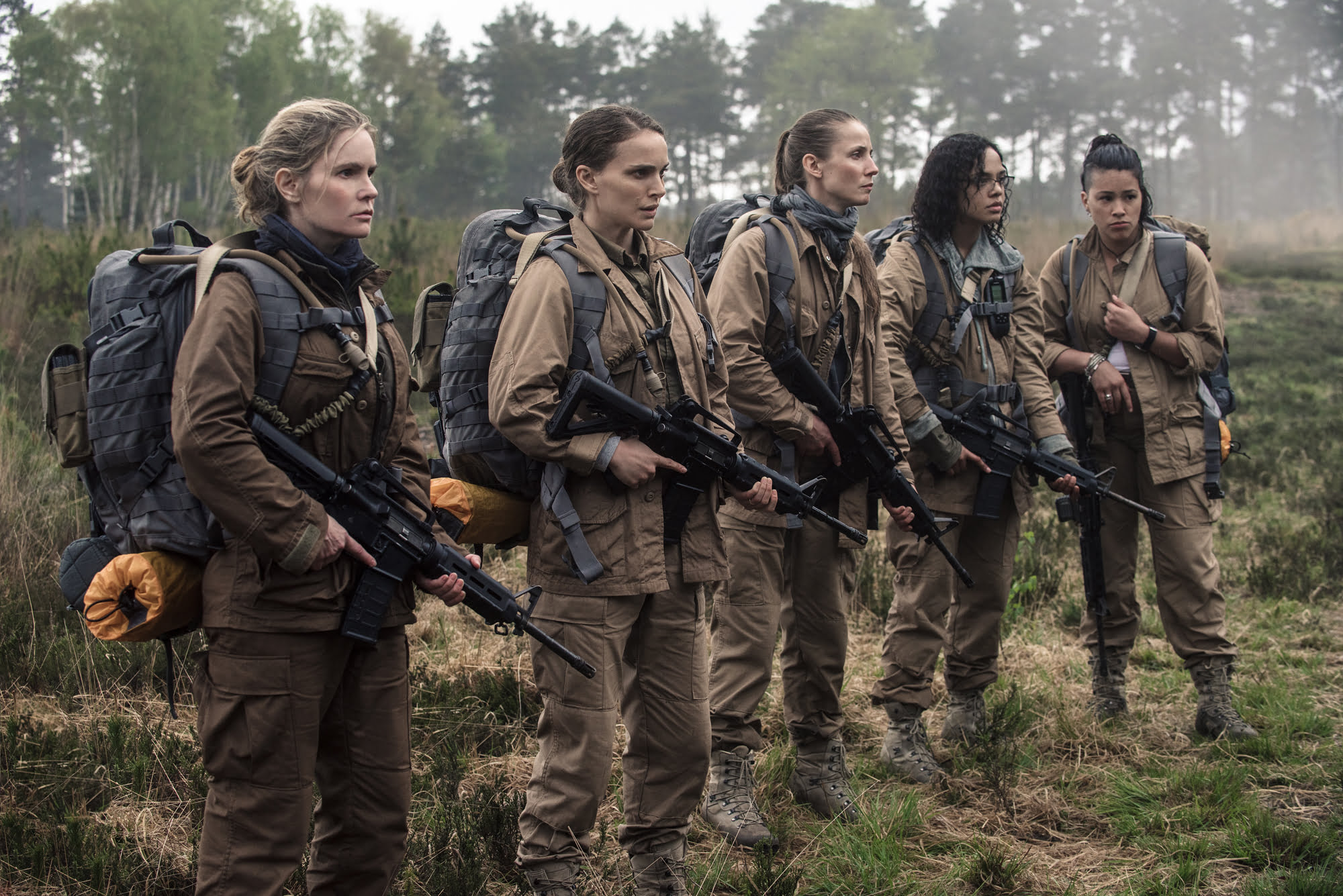 Alex Garland’s trippy, elliptical, and often purposefully evasive sci-fi thriller Annihilation envelops unsuspecting viewers not only into a world they’ve never witnessed before, but a state of mind that’s rarely been experienced in cinema outside of Kubrick or Tarkovsky. While writer-director Garland’s follow-up to his behind-the-camera debut Ex Machina doesn’t reach the lofty heights of those cinematic masters, it’s also more ambitious, thoughtful, and uncompromised than genre filmmaking gets these days.

The time shifting narrative – loosely adapted, condensed, and sometimes freely re-imagined from the best selling works of author Jeff VanderMeer – has plenty of existential questions on its mind, but one firm narrative question that the heroine of Garland’s film seeks an answer for. Molecular biologist and cancer researcher Lena (Natalie Portman) is shocked when her presumably deceased soldier husband, Kane (Oscar Isaac), returns home after three years from seemingly out of nowhere, only to have him picked up and immediately quarantined at a military infirmary. Lena is transported along with her ailing husband to a patch of mysterious swampland along the Gulf of Mexico. Following the impact of a meteor of some sort, an all encapsulating, shimmering boundary has been forming and swallowing up the landscape. Kane was one of the grunts sent into “the shimmer” to investigate, and the only person out of the many who entered to come back “alive.” This unknown and unexplainable transformation has been slowly gobbling up the countryside, and Lena joins up with a band of mostly non-military female researchers and professionals to become one of the next people to brave “the shimmer” before it swallows everything in its path. While everyone else has their own reasons for wanting to investigate this anomaly, Lena is more interested in finding out why her seemingly happy husband would agree to go on what appears to be a suicide mission.

The tone set by Garland throughout Annihilation is low-key and subtle menacing, often building to shocking moments of tension and suspense that feel like the strings on a well played violin suddenly snapping. It’s also a film that offers plenty of elegiac moments of grace and beauty that can be read as being both comforting and fatalistic at the same time. Garland matches the slowly creeping tenor of “the shimmer” perfectly through a combination of stunning production design, fluid cinematography from Rob Hardy (which boasts the only logical and narratively necessary use of refractive lens flares), and a sense of pacing that’s keener on offering viewers a series of unanswerable questions instead of pointed explanations. Annihilation is a sci-fi film that makes the viewer work for any sort of pay off. Garland cares more about the characters and their problems than he does about the actual nuts and bolts science aspects of his story, and the results are emotionally rousing.

Part of the joy and tension of watching Garland tell this story is trying to place a grasp on some sort of greater metaphorical meaning that the material lends itself to naturally. Annihilation could easily be read as a screed on how humanity has hardwired itself to self-destruct at a certain point, a political allegory told through the viewpoints of characters that represent different forms of feminism, or as a simple and touching metaphor for the destructive nature of cancer and the hope for rebirth in its wake. Annihilation could be analyzed and dissected through any of those lenses and possibly many more, and Garland has given the viewer a great benefit of the doubt that they’ll read into the film exactly what they want to, as if it holds a mirror up to the person watching it. Garland presupposes a great deal of intelligence on the part of his audience, and he never talks down to the viewer to say that their take on the mysterious nature of “the shimmer” is wrong, improving and enhancing VanderMeer’s source material with a great deal of visual elegance. 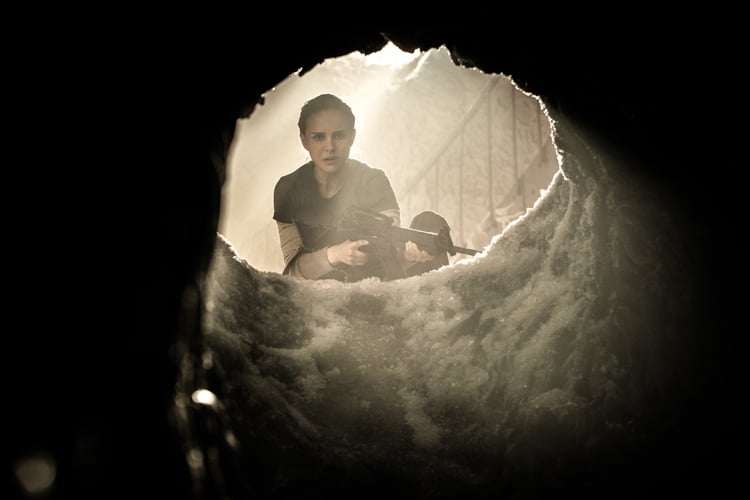 Once the story moves from our world and into “the shimmer,” Garland provides potentially antsy viewers with a tried-and-true genre hook for Annihilation’s second act. Because of her military background, Lena is the only truly experienced member of her expedition crew if something were to go wrong. She’s joined by a psychiatrist (Jennifer Jason Leigh), a first responder (Gina Rodriguez), an anthropologist (Tuva Novotny), and a physicist (Tessa Thompson). Although they initially get along, they realize that their perilous situation will lead them into a heart of darkness, full of grotesque mutations, eerily unexplainable phenomena, and the real answer to the whereabouts of the soldiers that came before them. A sense of mistrust and mania builds, and the secrets that they all brought into “the shimmer” threaten to pull them apart. If the rest of the film is about creating a sense of mystery, unease, and visual splendour, Garland’s middle section allows his actors to perform to the best of their capabilities, especially an increasingly unhinged Rodriguez and a gradually withdrawing Leigh. It’s the most violent, shocking, and least cerebral section of the film, but it’s also a bit of a concession to an audience that Garland hopes has been keeping up and thinking about his story.

It builds to a conclusion that will likely leave everyone who sees Annihilation scratching their heads and wondering what it all means. It’s assuredly a sophisticated and almost avant-garde final act, and an incredibly gutsy one for both Garland and Portman that’s hard to describe and to spoil in equal measure. While the final scene of Annihilation is a doozy, I remain somewhat unconvinced that the events leading up to that last (possibly predictable) reveal are narratively, emotionally, or artistically successful. In its final moments, Garland, Portman, and Annihilation take a turn towards the self-indulgent that could have worked if it was a bit more ethereal and a lot less of an obvious reflection of past events. I know it seems like I’m talking around something here (because I am), and I’m more than looking forward to watching Annihilation again, but I’m not sure if the ending lands as well as it could have without the excising of one sequence in particular that goes on far longer than necessary for a pay off that can be summed up in a shorter amount of time. It’s a moment that strives to achieve what Kubrick and Tarkovsky pulled off with 2001 and Solaris, respectively, but it falls well short of those ambitions upon an initial viewing.

To that same point, however, I’m happily flabbergasted that Garland could get a film as slippery and intelligent as Annihilation made at a major studio; one that has curiously mixed amounts of faith in its potential to connect with audiences. Paramount has shifted most overseas distribution rights of the film over to Netflix, which is a shame since Garland has so obviously and unabashedly made a movie that demands to be witnessed on a big screen in a pitch black room with premium sound. I don’t think Annihilation will work nearly as well at home as it does in a cinema, and I’m also not sure that all who see it in a cinema will be as blown away by its lofty existential leanings as I was, but it’s precisely the kind of film that deserves a chance in a marketplace dominated by half-hearted blockbusters and homogenous indie films that are virtually indistinguishable from one another save for a few varying degrees of competence and excellence. Annihilation demands full attention, an open mind, and a willingness to engage the material beyond what’s spelled out for them, three qualities that few films ask of their audiences these days. It’s also the rare kind of film that gets better the longer you think about it.

Annihilation opens in theatres across North America on Friday, February 23, 2018.

Check out the trailer for Annihilation: