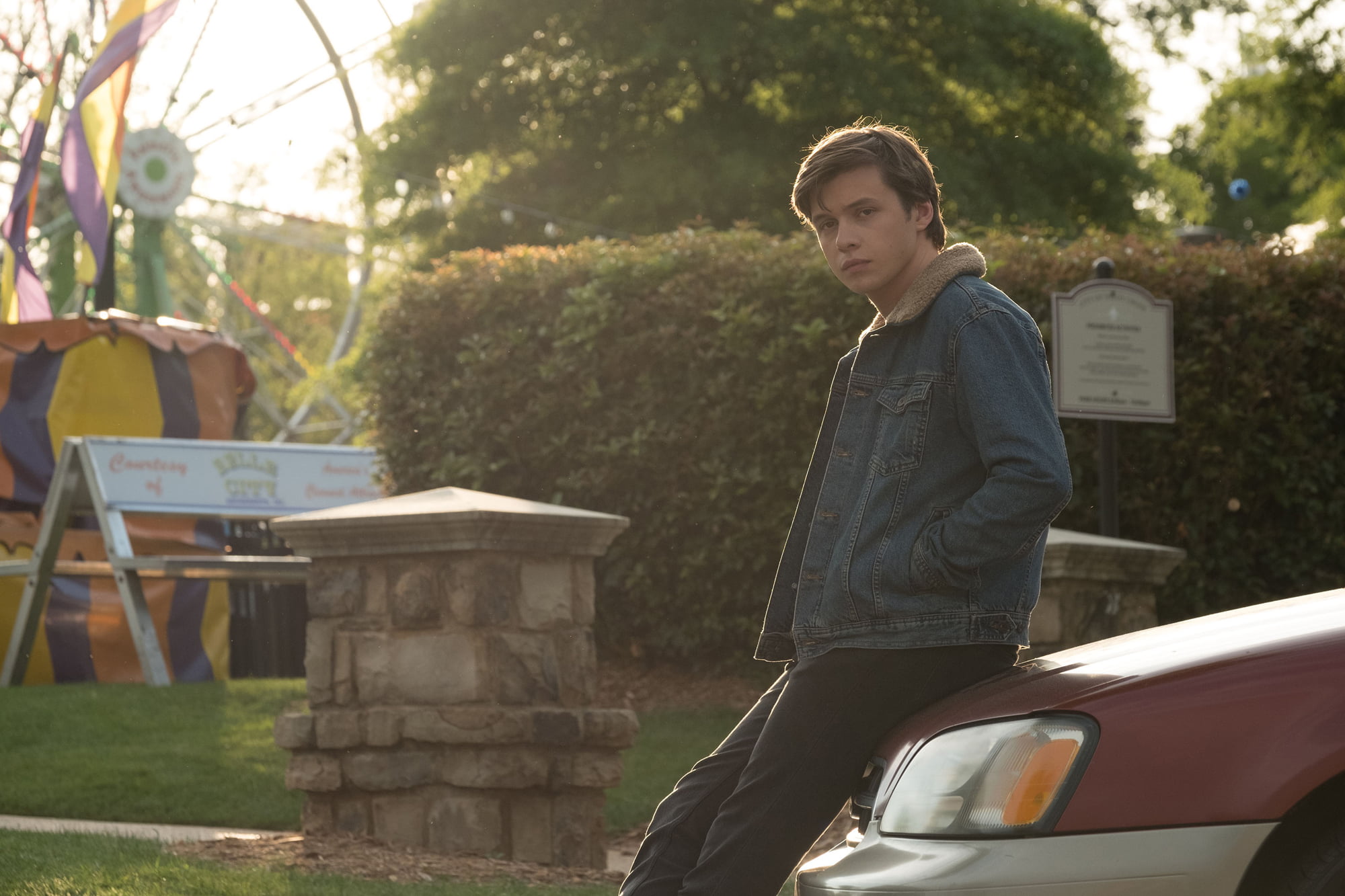 The charming, gentle, and effortlessly funny teen romantic comedy Love, Simon is a tried and true genre film with a novel, inclusive, and often sadly unused hook. In many respects, the third directorial feature from television impresario Greg Berlanti (best known as a producer on shows like Dawson’s Creek, Riverdale, and most of the current DC Comics based efforts) sticks to a tried and true formula without much deviation (and a healthy dose of classical literature nods), but Love, Simon uses these clichés and tropes in the service of something fresher than expected and potentially inspiring.

In this adaptation of a 2015 YA bestseller by Becky Albertalli, rising star Nick Robinson plays Simon, a high school senior who has – by his own admission – a fairly privileged and uneventful life. His parents (Jennifer Garner and Josh Duhamel) have a stable, loving relationship. He has a healthy, non-confrontational relationship with his younger sister. He’s popular-ish, with a close-knit band of like minded friends. He’s also gay, something he hasn’t spoken openly about to any of them. When a post on a website that allows Simon’s classmates to post anonymously about themselves is written by a fellow closeted teen known only as “Blue,” Simon decides to reach out and tell his own story. Simon begins a kind, gentle flirtation with “Blue,” but he’s constantly unable to figure out the identity of his new crush. After failing to log out of his secret email in the school library, Martin (Logan Miller), an overbearing, blackmailing drama nerd, threatens to expose Simon’s sexuality to the whole school. In exchange for his silence, Martin demands that Simon help him hook up Cyrano-style with one of Simon’s best friends (Alexandra Shipp). Fearing that being outed would only send “Blue” further into the closet, Simon reluctantly agrees, making his life a bit of a mess in the process.

To craft a gentle, crowd pleasing piece like Love, Simon, Berlanti has obviously studied and stolen from some of the greats of the genre. Berlanti’s use of music is immediately reminiscent of John Hughes, which complements the Hughes-ian naturalism of the dialogue, courtesy of first time feature, but veteran television screenwriters Isaac Aptaker and Elizabeth Berger. The situations in play are high concept, episodic, and rigidly controlled, which speaks to any number of ambitious teen television series from the past forty years, and is admittedly a case of Berlanti and his writers sticking to what they know best. Allusions to classic Shakespearian romances and the aforementioned Cyrano (which are so overt they pop up as part of Simon’s bedroom decor) aren’t necessarily anything new, but are well handled and integrated into this modernist romance. There are outrageous flights of fancy straight out of any number of 90s teen movies, the most memorable ones involving crappy interpretations of musical numbers from Cabaret and an even more left field Whitney Houston inspired dance number. Simon often narrates his life story like an Aaron Sorkin walk-and-talk. The teen movie beats contained within Love, Simon aren’t anything new by any stretch, and it does lend to the film feeling a tad predictable and a bit longer than it has to be, but it’s amazing just how much Berlanti and company’s change in sexual perspective counts for a lot.

What Love, Simon boasts in spades that most teen movies lack is a sense of suspense and stakes. Simon is a likable, affable, mostly well meaning young adult who makes some of the same terrible life decisions that straight kids make, but those foibles and flaws are magnified when one considers the further reaching consequences of his actions. Simon has been forced into an unpleasant situation by the film’s ostensible villain, but the series of events that transpire cause an already repressed powder keg of emotions to reach a boiling point. By the time Love, Simon reaches the predictable second act wrinkle that will force our hero into making a stand, accepting responsibility, and letting self-love become part of the equation, the results are assuredly devastating and resonant. 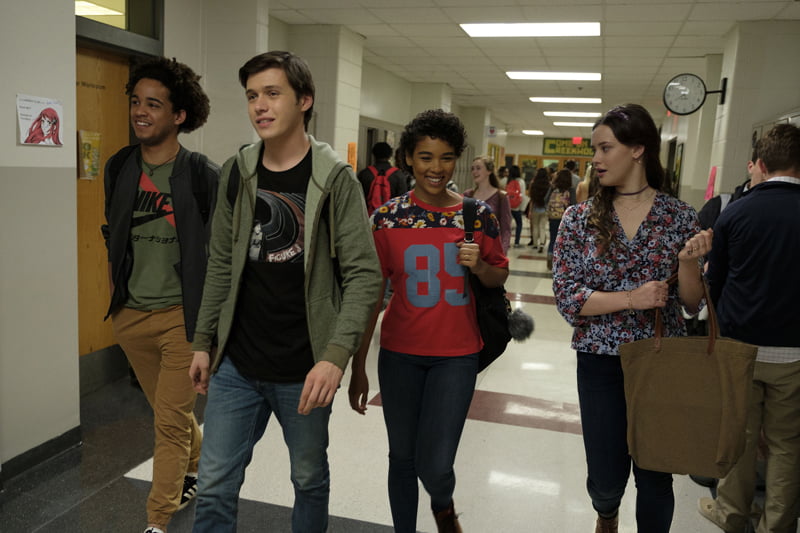 A lot of the film’s success belongs to Robinson, who has been a welcome screen presence for quite some time now, but finally gets a star vehicle worthy of his talents with Love, Simon. Robinson deftly balances Simon’s mental desire for a sense of normalcy and his heart’s need for companionship with intelligence and subtlety. Even when Berlanti tries to go for some cheap laughs – mostly from Miller’s ineptitude or the antics of Tony Hale and Natasha Rothwell, cast nicely as the school’s wishy-washy vice principal and put-upon drama coach, respectively – Robinson grounds the film with a quiet, unwavering humanity. Simon never feels like an overwritten caricature of a teenager through Robinson’s delicate work. No matter who’s placed opposite Robinson in any given scene, the young actor is able to match and enhance them perfectly. Love, Simon might revolve entirely around his character, but Robinson gives one of the warmest and most generous performances ever contained within a teen movie.

Thanks to Robinson’s work and Berlanti’s gentle comedic and dramatic sensibilities, there will likely be many who see Love, Simon as a landmark work, and hopefully plenty of teens who will realize that it’s okay to be themselves. I – as a mostly straight identifying male – will leave it up to more qualified queer critics to discuss how Love, Simon could be seen as altogether too specific, white, clichéd, or privileged to make a grand impact on how the world perceives major studio produced romantic comedies. To a certain degree, those concerns are totally valid. I don’t think for a single second that Simon’s troubles would have been as smoothly and happily resolved if he were a person of colour, poor, living in an urban setting, or coming from a somewhat broken home. I can also see some credibly making a dissenting argument that would suggest that all Love, Simon proves that gay teens deserve the same kind of formulaic high concept romances that straight kids get.

But taken in the proper context of what it’s trying to achieve, Love, Simon is assuredly successful, entertaining, and made with its heart firmly in the right place. Love, Simon isn’t intended to be read as a fiery, fence swinging, confrontational, or subversive stab at cinematic equality. It’s just trying to be a good bit of heartstring tugging entertainment told from a sexual perspective that doesn’t get many chances to work on such a widely released cinematic level. Is Love, Simon perhaps a bit too safe and sanitized? Probably, but that doesn’t make it any less enjoyable or potentially game changing. It’s a warm, hopeful, unassuming film made for a world that could use a hair more kindness and acceptance than it currently has at the moment.

Check out the trailer for Love, Simon: