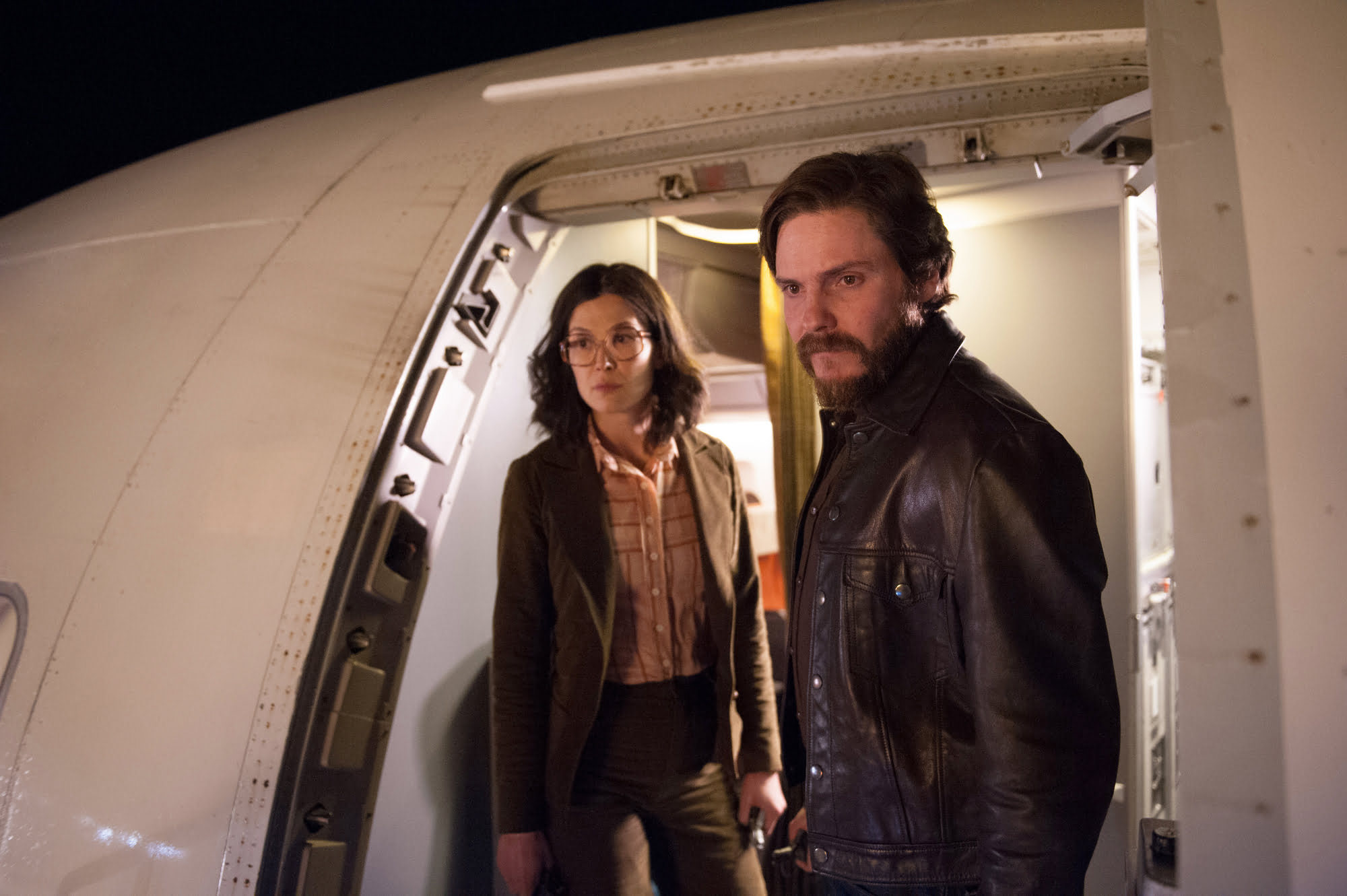 The fourth dramatized retelling of one of the most harrowing hostage crises in world history, 7 Days in Entebbe boasts a perfect director for the intense job at hand and a maddening amount of technical, performative, and narrative inconsistencies at every other turn. Although the material seems tailor made for Brazilian filmmaker José Padilha (the Elite Squad films, the ill-fated remake of RoboCop), 7 Days in Entebbe still manages to be a sometimes head-scratching letdown.

In late June of 1976, a band of pro-Palestinian revolutionaries from Germany (led on screen by Daniel Brühl and Rosamund Pike) hijacked an Air France flight from Tel Aviv to Paris during a stopover in Greece. The hijackers re-route the plane to Entebbe, Uganda, a faraway point perceived to be out of the Israeli army’s reach. Demanding the immediate release of political prisoners in exchange for the lives of all 240 passengers and crew members on board the flight, the hijackers are protected by the armies of ruthless Ugandan dictator Idi Amin (Nonso Anozie), but face an uphill battle when trying to talk with Israel, a country known for its hard-line stance against negotiating with terrorists. Back in Israel, Prime Minister Yitzhak Rabin (Lior Ashkenazi, who can also be seen this week in the much better Foxtrot) and Defense Minister Shimon Peres (Eddie Marsan) debate and discuss their extraction and infiltration options, with the former expressing a desire for diplomacy and the latter favouring more militaristic options.

The only facet of 7 Days in Entebbe that boasts any degree of consistency is Padilha’s visual sensibility. Bathing everything in a wash of gold and brown lighting to match the period appropriate, albeit low budget decor, Padilha and cinematographer/frequent collaborator Lula Carvalho stop just short of making everyone look like they’re standing in a fog of cigarette smoke. It’s a good choice for the drab, dirty Entebbe airstrip and the Israeli boardrooms alike. 7 Days in Entebbe is as chaotically edited as Padilha’s previous efforts, but it makes the otherwise slow burning and unnecessarily time shifting narrative here move and transition at a quick enough pace, and it certainly makes the film’s handful of action beats (particularly the well staged climax) suitably exciting.

But no amount of style would ever save a script as conflicted and as cast as ill assembled as what viewers will find here. From scene to scene, 7 Days in Entebbe never settles upon a consistent or basically coherent tone. Much of this is due to the simultaneously over and underwritten screenplay from Gregory Burke (’71), which comes across as two entirely different films that have been stitched together without a thought given as to how it all might work. The sequences on the ground in Entebbe boast more theatricality, intrigue, and suspense, but the characters are patently thin and their fates never in doubt. Occasionally, Padilha will cut away to flashbacks designed to give the hijackers some backstory, but none of these asides will ultimately matter or enhance the story.

On the other hand, the time spent in Israeli war rooms is somehow worse. Laden with reams of expository dialogue that no one could make watchable or performable, the cast flounders aimlessly through a dreadfully boring B-grade storyline that would have benefitted nicely from even the cursory amount of backstory and character motivation that the hijackers were getting. It almost doesn’t matter that the apolitical stance of 7 Days in Entebbe doesn’t choose a moral side. It’s not even creating any interesting or coherent moral arguments in any direction. 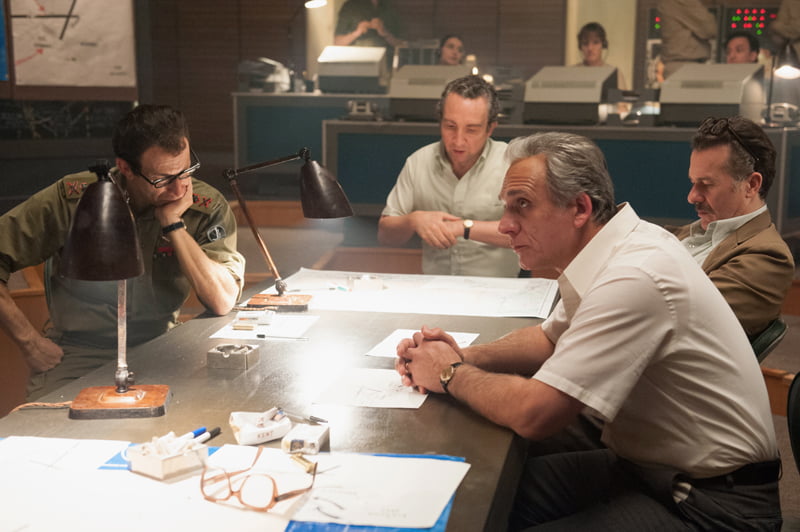 Instead of hiring performers that could have made the sub-par material into something engaging in spite of the glaring flaws and plot holes, 7 Days in Entebbe appears to have been cast by someone throwing darts at pictures tacked up to a very large corkboard. Brühl and Pike are consummate professionals, and believable enough as left wing revolutionaries, but never as people capable of hijacking a plane. They’re made out to look like a pair of ineffective goofballs with a terrible plan, and there’s no amount of acting prowess that Brühl or Pike could unleash that could make anyone take them seriously. Brühl only shrugs and looks progressively more worried, while Pike gets what should be the meatier role of the hijacker who slowly goes mad due to stress, but it only amounts to an unintentionally hilarious and awful scene where the character breaks down and her performance lapses into full on campiness.

The Israeli set scenes in 7 Days in Entebbe fare inarguably worse. Every actor who isn’t Ashkenazi or Marsan is undistinguished and interchangeable, making no impression. Ashkenazi’s world leader always enters a scene lighting up a cigarette, which I assume is supposed to underline the character’s stress level, but instead just ends up making Rabin look like an aloof badass. He’s put only into the direct opposition of Marsan, who is woefully miscast and turns in what’s bound to be one of the worst performances of the year, possibly even the decade. Buried under facial, dental, and hairline prosthetics that do the actor no favours, Marsan turns in one of the most ridiculously caricatured performances of a famous, well documented world leader that I’ve ever seen. Marsan is normally a capable actor, but his presence and look here is a thoroughly off-putting annoyance.

But not every actor in 7 Days in Entebbe is cast adrift by the script’s lack of vision and Padliha’s inability to make sense of it all. There are several very good supporting performances to be found here in largely throwaway roles. Anozie’s restrained, but frightening take on Idi Amin is satisfying to watch. French actor Denis Ménochet brings more gravitas than is needed to his role as the doomed plane’s flight engineer. And Ben Schnetzer shows up late in the film for a pivotal role as a soon to be famous soldier (who’s also saddled with a weird subplot that’s used as a framing device) that’s subtle and understated. Ultimately, none of them are in enough of 7 Days in Entebbe to right the sinking ship, but they also don’t get dragged down as badly as their higher profile cast-mates.

There’s nothing consistent about 7 Days in Entebbe outside of its bizarre commitment to inconsistency. It’s never boring to sit through, but that’s only because I was curious how the quality of the film was going to vary from scene to scene. While Padilha ultimately gets from point A to point B in terms of the film’s historical details, the math and directions being used to get there are indecipherable. Some scenes work, others fail spectacularly, and everyone involved deserves better than this. It’s the kind of misfire where there’s plenty of blame to go around.

Check out the trailer for 7 Days in Entebbe: