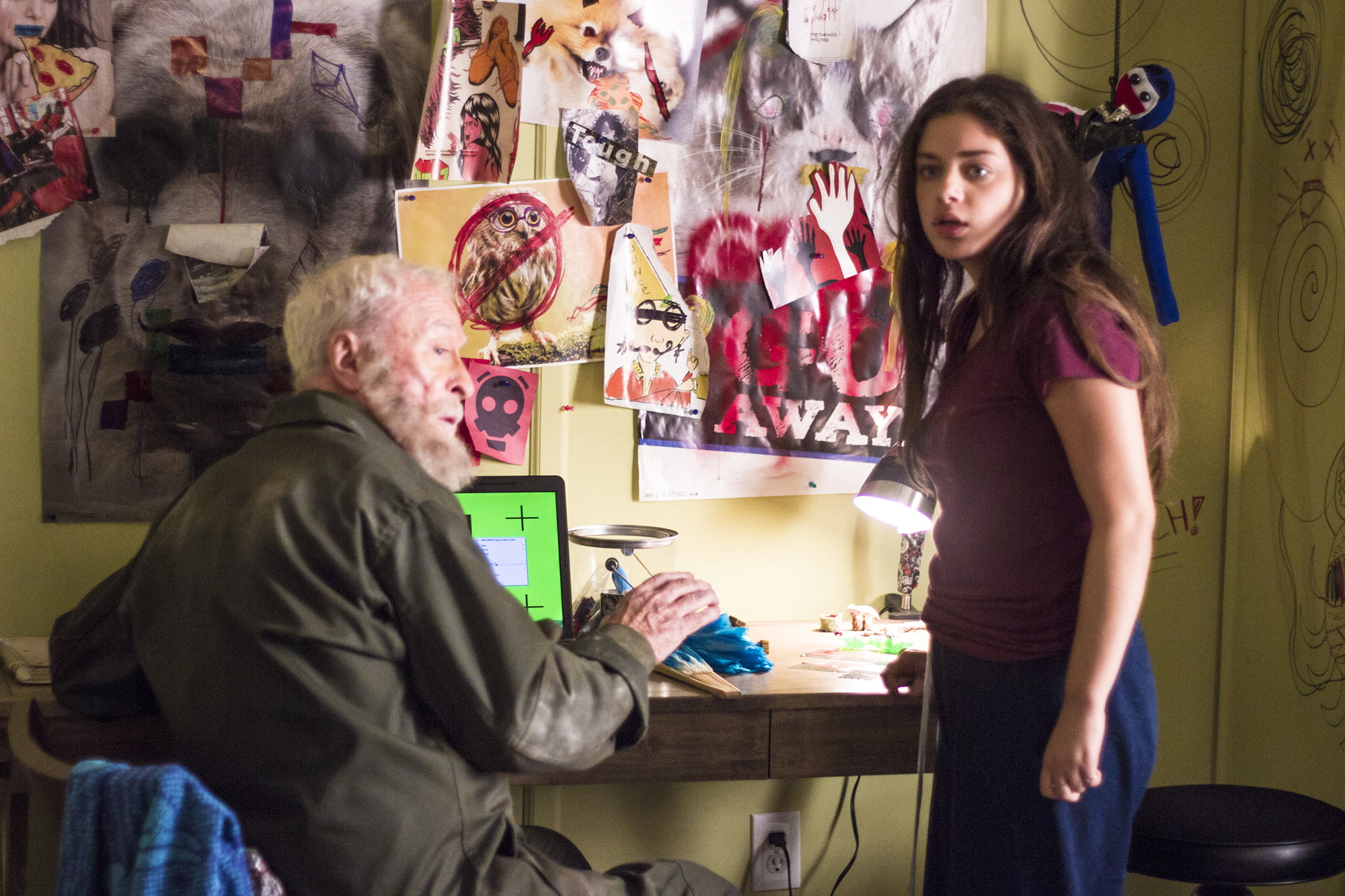 Even after watching it, I’m not sure the teen movie-slash-political satire Dear Dictator is a real film. It has a stellar high concept hook that should lend itself well to a madcap romp, and it has the unusual, but welcome creative vision to cast cinematic legend Michael Caine as a ruthless third world dictator who seeks the help of a sullen American teenager to hide out in the wake of a coup d’état. It’s a premise and casting gambit that’s funny enough on its own, but the overall writing and execution of Lisa Addario and Joe Syracuse’s long gestating passion project leaves a lot to be desired.

Tatiana Mills (Odeya Rush) loves vintage punk rock, rebelling for the sake of rebelling, and generally acting like a snot to anyone and everyone around her. Her mother (Katie Holmes) is both overbearing and emotionally unavailable, thanks to an unwavering crush on her married, foot fetishist dentist boss (Seth Green). Tatiana has a crush on the lead singer of a Christian hardcore band (Jackson Beard) who falls short of the grace of the lord when he starts hooking up with a popular, sexualized, mean girl rival (Fish Myrr). The only source of joy Tatiana gets is an unlikely pen pal correspondence (the result of an assignment from one of her teachers, played by Jason Biggs) with General Anton Vincent (Caine), a Caribbean dictator with a Castro beard and a bloodthirsty desire to remain in power. Tatiana looks up to Vincent, blissfully and willfully ignoring how terrible her idol truly is; probably because Tatiana is also a terrible person. When Vincent is overthrown, he secretly slips away from prosecution and probable execution to hide out with Tatiana in suburbia. In exchange for keeping him hidden until he can make contact with his comrades, Vincent agrees to help Tatiana overcome her bullies (even though Tatiana is arguably more of a bully than they are, but I digress).

Addario and Syracuse’s screenplay for Dear Dictator kicked around Hollywood for the better part of a decade as a noteworthy “blacklist” screenplay, meaning it was generally well regarded and potentially game changing, but no one ended up producing a final product from it. Anyone familiar with the “blacklist” will tell you that very often the scripts found within its rolls have admittedly great ideas, but are in desperate need of some fine tuning and re-writing. Addario and Syracuse (who also collaborated on the comedies Lover Girl, the Biggs starring Amateur Night, and the script to Billy Crystal’s woeful Parental Guidance) don’t seem to have changed much about Dear Dictator as it makes its way to the screen. It plays awkwardly as a story that has given up the search for a coherent, workable tone, and like it has been made from the untouched first draft of a script instead of a finished product.

Shot like a sunshiney, made-for-Nickelodeon movie, but chock full of thunderously inappropriate gags and dialogue that Trey Parker and Matt Stone bristle, Dear Dictator has an underlying darkness that Addario and Syracuse can’t capture on screen as directors. Tatiana is – in no uncertain terms – an irredeemable lout at best and a clueless poser at worst, two sides to her personality that the talented Rush can play well as a performer, but neither of which Addario or Syracuse wants to examine in any meaningful way. The laughable incongruity of casting Caine as the cockney accented leader of a Caribbean nation aside, Dear Dictator also ignores that the core premise is actually about a troubled kid one psychological step away from committing actual violent acts against her classmates befriending a mass murderer. This is a tone deaf, day-glo, falsely punk rock equivalent of Apt Pupil, and it’s every bit as baffling to behold as that sounds. 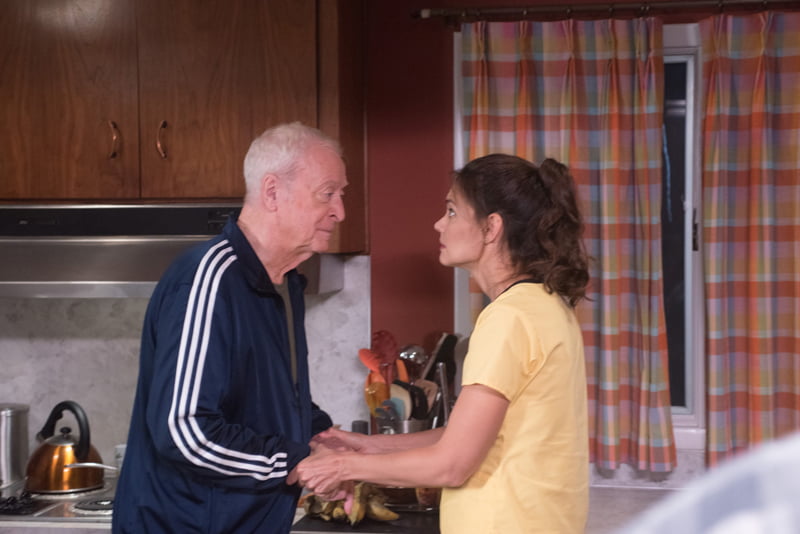 In addition to an amateurish assembly that boasts some of the worst digital effects I’ve ever seen, an inability to hide the fact that Caine isn’t actually opposite his co-stars in some scenes, and moments that just abruptly end before crashing awkwardly into the next cringe-worthy sequence, Dear Dictator also has no clue how to frame its comedy. Sometimes it wants to be a satire, and it kind of works when it can stay focused, particularly an early montage of Tatiana and Vincent writing back and forth to each other. Sometimes it wants to be “edgy,” “unapologetic,” and “in your face,” by trotting out colourful references to “trannys,” “homos,” “heffers,” and “retards,” but the film isn’t even consistent enough to get its own misguided and outdated sense of misanthropy right. Sometimes it wants to be a gross out comedy via Green’s sunken-eyed foot licking or possibly the most horrifyingly unfunny gag involving a bloody tampon ever committed to screen. But most of the time, Addario and Syracuse want this to look and feel like a mismatched buddy comedy. It could have worked if any of the film’s more tantalizing threads had been better developed, but in its current form, the film is patently useless.

It goes without saying that the inconsistent tone leads to inconsistent performances. Rush comes away generally unscathed, probably because deep down she realizes that she’s playing an asshole and not a conventional teen movie heroine. Caine, who hasn’t given less of a fuck since Jaws: The Revenge, sometimes gets a chuckle from an effortless line delivery or facial expression, and he’s so much of an old pro that even his 1% speed is enough to luck into some occasional gold. Holmes might be the best thing about the film, though. Throwing all caution to the wind and unafraid of mugging or looking like a goofball, this might be her best comedic performance to date. It’s a shame that Dear Dictator isn’t worth the effort.

There are precisely two big laughs to be found in Dear Dictator, and both of them reference far better movies than the one unfolding on screen. One is a running gag involving Caine using Tatiana’s Blue Velvet themed Halloween costume as a frequent disguise. The other is a throwaway, left-field exchange where Tatiana tries explaining the politicized overtones of Maniac Cop 2. I wasn’t thinking about much watching Dear Dictator, but it did remind me that Maniac Cop 2 is severely underrated and that I would rather be reviewing that instead of this. Or Blue Velvet. Or really anything other than this.

Check out the trailer for Dear Dictator: