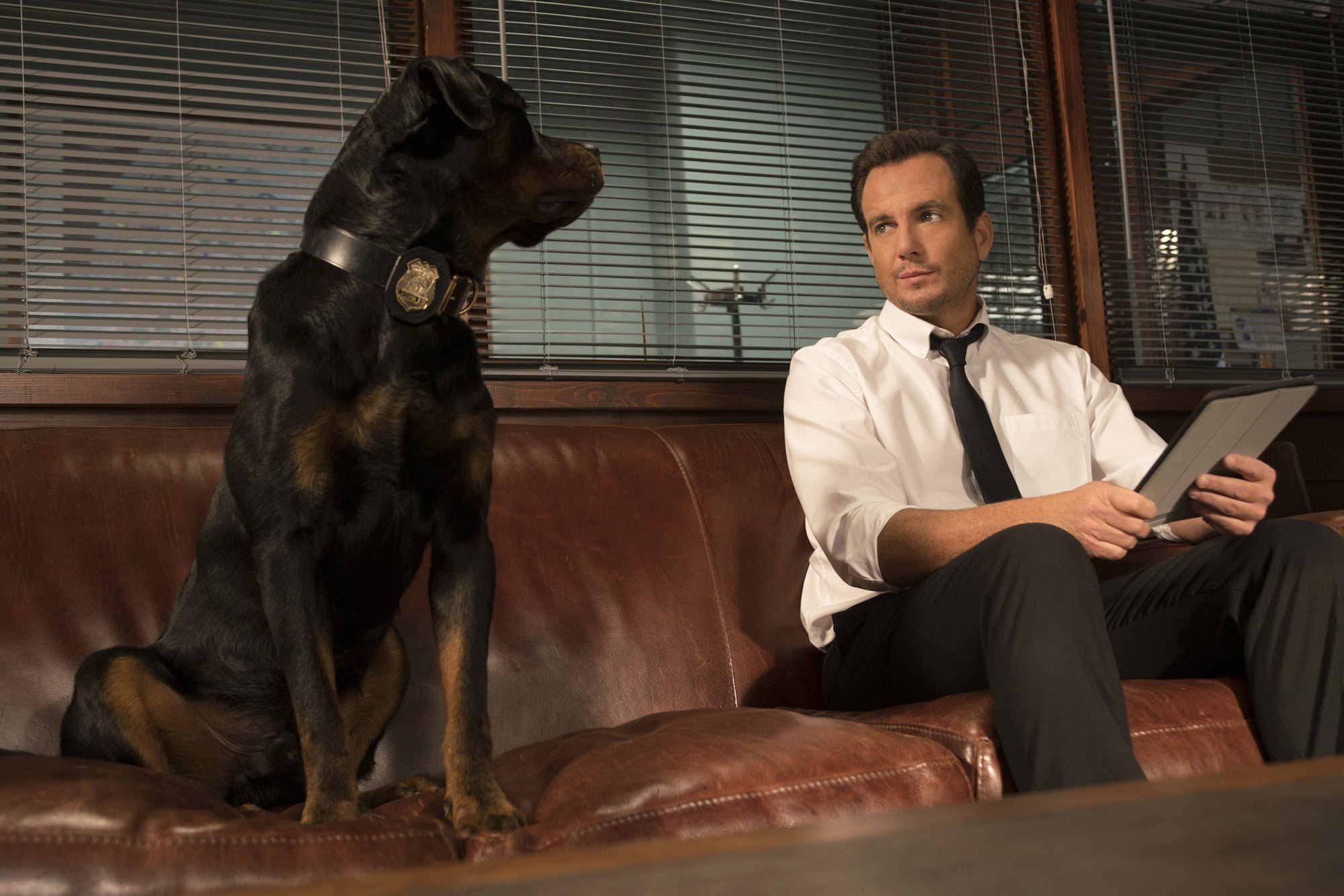 “You can’t polish a turd, but you can roll it in glitter.”

That’s an actual line of dialogue spoken by one of the astute canine stars of the asinine family film Show Dogs, a movie so bad that it should only be shown to unruly children as a last resort punishment. Approximately a decade late to cash in on the last “great” wave of talking animal films in the vein of Beverly Hills Chihuahua and the never-ending Air Bud series (and, no, I’m not counting things like The Jungle Book or Paddington because those are actual movies), Show Dogs comes across initially as a misguided project that spent several years locked away in a vault. Unfortunately, the pop culture references contained within this dire project include call backs to things from the past year, so the only conclusion I can draw about this film’s existence is that everyone involved either owes lots of money to many disreputable criminal types, has astronomical mortgage/alimony payments to keep up with, is being somehow blackmailed, is desperate to fund a passion project by any means necessary, or they’re just flat out greedy. Show Dogs is made with so little care or craft that it flat out doesn’t care if anyone of any age has a good time. They got your money, and that’s all they need. If you pay to see Show Dogs, you deserve every ounce of resentment the film can offer you in return for your investment.

Rottweiler Max (voiced by Ludacris) is an NYPD police dog intent on capturing a bunch of international animal smugglers who’ve just absconded with a cute baby panda. He has no human handler or partner because… I guess he’s a renegade who plays by his own rules, but really I have no clue. Max’s sting on their operation is foiled, however, when Frank Nichols (Will Arnett), an FBI agent assigned to the same case, blows Max’s cover and case. Both officers get wind that a deal for the panda cub will be going down at an illustrious Las Vegas dog show. Forced to team up (for no really good reason), Frank goes undercover at the show as a dog handler and Max as an unlikely, untrained show dog. During their investigation, the duo learn that not only are the baddies trying to sell the panda, but they also plan on kidnapping the winner of best in show. This means that the film, which does next to nothing with the baby panda except using its sad looking eyes to manipulate the audience, doesn’t even need its inciting incident. We could have just skipped the panda and gone straight to the dog show, but whatever, I didn’t make Show Dogs.

Show Dogs is basically a grafting of Miss Congeniality onto an Air Bud movie, and while there could have been something lightweight and fun in such a premise, director Raja Gosnell (a pro at making movies with crappy CGI characters like the aforementioned Chihuahua flick and the two live action Smurfs outings) and writers Max Botkin (What Happened to Monday) and Marc Hyman (The Perfect Score, Osmosis Jones) always go for the lowest hanging fruit. The general rule of thumb here is that if a sassy, sugar hyped three year old can’t understand the joke, it won’t even be attempted. There are a couple of nods to weary adults – particularly the film’s constant need to remind us that Arnett was the Lego Batman – but all of them are lame and delivered with the conviction and gusto of Jell-o that’s repeatedly been backed over by a semi-truck. The jokes are so unfunny that not even a set of manufactured bloopers rolling over the credits can get a chuckle.

There’s no coherent plot or storytelling craft. Everything that happens in Show Dogs is an excuse to waste time, with most scenes dragging on at agonizing length just to ensure this thing makes its way past the ninety minute mark. A subplot involving Arnett’s dealings with a fellow undercover agent posing as a handler (Natasha Lyonne) dies because of a complete lack of chemistry outside of both of them looking like they’d rather be anywhere else in the world right now. At one point, Arnett and Lyonne’s characters have to come to a revelation about the case where they finish each other’s sentence, but instead of seeming excited, they actually end their line reading with an exasperated sigh. The “secret” identity of the main villain is obvious from the second the character pops up on screen, and his henchman is just a vague amalgamation of British stereotypes that don’t make much sense. 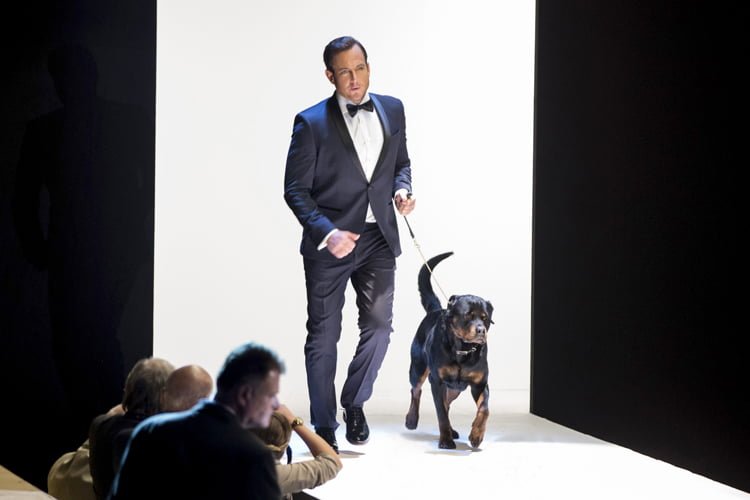 Show Dogs uses real dogs whose mouths have been digitally manipulated to make it look like they’re talking. It’s an unnatural effect that never works because even when the dogs’ mouths are moving, quite often the animals will be looking distractedly at something other than what they should be reacting to. It’s the opposite of what the Muppets or animated characters can do: they aren’t real, but they at least create some form of eye contact with other on-screen characters or the viewer. You can’t get that with a real dog 100% of the time, these are actor animals, some have probably passed a service animal certificate and often Show Dogs will have characters talking about one thing and lknow how to behave and listen to queues, but there is no way to tell a dog where to direct his eye balls. They end up looking just as bored with the material as their co-stars. It’s somehow less convincing and charming than a direct-to-video Air Bud sequel. The only difference is that I’m sure the dogs were having treats dangled for them off screen, and the adults didn’t have any such positive reinforcement outside of their paycheques.

It’s also an ugly film in every other respect. The editing and some of the lines of dialogue suggest a final product that was heavily retooled every step of the way to soak up the flop sweat. Every exterior shot of Las Vegas is so curiously under populated that they all seem to have been shot between the hours of 3am and 8am, like they were trying to keep the filming of Show Dogs a secret to avoid embarrassment. Nods to musical novelty acts Baha Men and LMFAO are curious because the target demographic for the film are too young to know either of them, and anyone old enough to remember them will wonder why a film released in 2018 would include either reference.

So if Show Dogs is ugly, inept, unfunny, and condescending crap that families should think twice about bringing their kids to (and they assuredly will thanks to a complete lack of options for kiddie flicks in theatres at the moment), does that mean it will appeal to bad movie aficionados? No. Absolutely not. And that’s because the biggest sin of all those committed by Show Dogs is the sin of being deathly boring. It’s not even the kind of awful that’s backhandedly engaging to behold. There’s nothing in Show Dogs for any sort of moviegoer to latch onto emotionally or ironically; a perfect null set of a film from which no one will ever benefit.

Check out the trailer for Show Dogs: