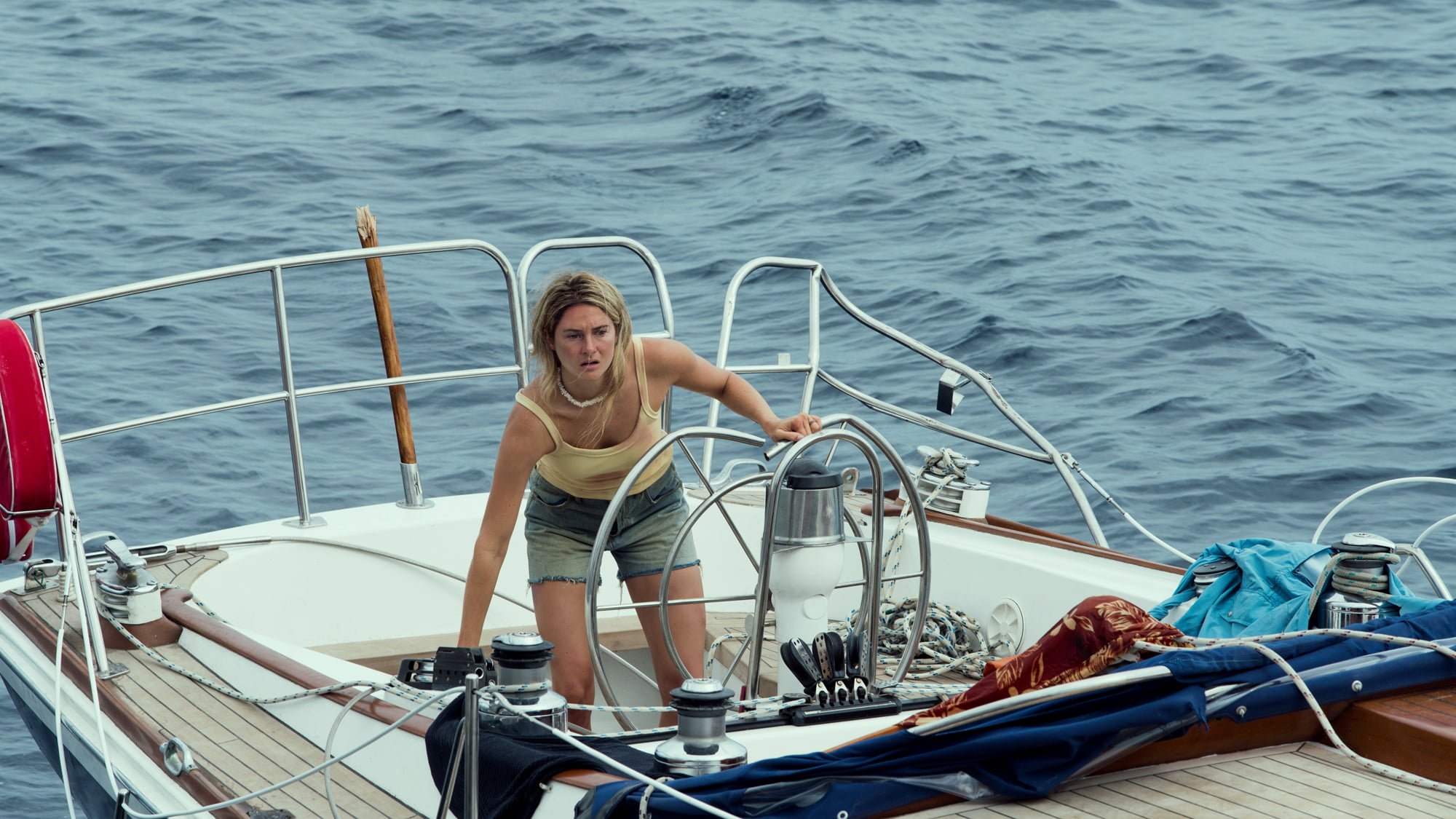 Just the right blend of corny, courageous, and harrowing, the romantic lost at sea thriller Adrift is a fine bit of mainstream summer blockbuster counterprogramming. Based on a true story and boasting a physically and emotionally demanding lead performance from Shailene Woodley (who also serves as a producer here), the latest English language effort from Icelandic director Baltasar Kormákur (Contraband, 2 Guns, Everest) might not rewrite the survival drama handbook, but it still delivers a competent, engaging, and often exciting final product.

In 1983, Tami Oldham (Woodley) was an independent, free spirited young woman travelling around the world by boat, hopping from port to port, working for a while in a given place, and then shipping off to her next destination. While in Tahiti, she meets and falls in love with a slightly older British sailor named Richard Sharp (Sam Claflin). As their love grows and relationship blossoms into something a lot more serious, Richard is contracted to sail a British couple’s prized yacht from French Polynesia to Tami’s hometown of San Diego, California for a princely sum. Not long into the 4,000-plus mile journey, a storm devastates their boat, leaving the couple with little food and water, throwing them 1,500 miles off course with almost no steering capabilities and outside of any trade routes or flight paths that could potentially lead to their rescue. With Richard severely injured, it’s up to Tami to help navigate the boat for a brutal forty day journey towards Hawaii and safety.

The adaptation of Oldham’s narrative by screenwriting twins Aaron and Jordan Kandell (Moana) and David Branson Smith (Ingrid Goes West) bounces back and forth in time between the couple’s life threatening situation in the middle of the Pacific Ocean and their courtship. Unlike last week’s similarly time shifting, but lower key doomed romance On Chesil Beach, the narrative jumps work a lot better here because of the stakes involved. The transitions between the gentle love story and the sometimes gruesome reality of Adrift can be jarring at times, but those jolts are part of the stylistic point trying to be made here. If you’ve seen any film where someone has been shipwrecked, stranded in the desert, or lost in the woods, you’ll know exactly what to expect from Adrift, and the novelty here lies in how Kormákur and company portray Oldham and Sharp’s plight as an unwanted, nightmarish intrusion into their strong, loving relationship. In both tragedy and happiness, Tami and Richard act like no one else in the world exists, and the leaps back and forth in the timeline of their relationship underscore this theme effectively.

Kormákur is a masterful technician with this kind of material, and Adrift certainly plays to the director’s strengths. Even in a regular theatre, the storm and shipwreck that sets things in motion (which thanks to the plot structure, doesn’t happen until late in the film) is so bombastic, loud, and frightening that it can turn even normal seating into motion seating. Renowned cinematographer Robert Richardson rises to the challenges by always attempting to film everything in the longest takes possible, even if it means following alongside someone as they jump off a cliff into the water and then swimming alongside them or going through every inch of the ship’s blown out hull. The production design is a great bit of controlled chaos on the ship and idyllic in flashbacks, while the effects make-up on Woodley and Claflin is appropriately sun-baked and grotesque. On a technical level, Adrift is marvelous from top to bottom and with little fault, which is quite an achievement since filming anything on open water is notoriously difficult and complex. This isn’t the film to see if you get seasick easily, but on a visual level it certainly comes across viscerally.

But technical credits aside, Adrift wouldn’t be much of anything without a pair of game stars willing to push themselves to their mental and physical limits, and while Claflin certainly obliges, the film belongs primarily to Woodley’s more transformative work. Save for a single sequence early on where a hysterical Tami has a freak out (mostly because the audience hasn’t been acclimated to her performance by that time), Woodley conveys equal amounts of strength and abject terror. Clearly doing a lot of her own stunt-work, Woodley’s performance is a remarkable balance between the physical and the dramatic. It’s exhausting just to watch her try to survive, and the actress makes us marvel at how Tami was able to survive while simultaneously questioning how she could have done it. Claflin has far more to do in the flashback sequences, where the pair have great chemistry, but the bits on the boat will likely stick in viewer’s minds far longer, meaning it’s hard for Woodley to not make a more indelible impression.

It should also be noted that Adrift is built around a plot device that most eagle eyed viewers will be able to piece together from Kormákur’s opening shot, but that in no way drags the film down around it. It could annoy some of the more cynical viewers in the audience, and while I found it kind of charming, your mileage, as always, may vary. But based on the bar it sets for itself, Adrift is a no-nonsense kind of film that accomplishes exactly what it sets out to do, and it does it well. It will make those in the mood for a love story swoon, and it will equally please those in the mood for a thrilling adventure yarn. There aren’t any superheroes , dinosaurs, or spacecrafts in this, and there isn’t a number after the title, but it is still a part of the summer movie season, and Adrift feels right at home there.

Check out the trailer for Adrift: