Packed with more awkward sincerity than pratfalls, the Johnny Knoxville starring comedy Action Point (which was not screened for critics in advance of its release this weekend) will likely leave fans wistful for the days of Jackass wanting more, and there isn’t much of an audience for this sort of thing outside of those fans. Possibly because Knoxville and company are getting on in years, Action Point decides that it wants to tell a heartwarming story instead of just lining up a bunch of gags, elaborately ill advised stunts, and straight on punches to the crotch. The results are admittedly better than one might expect, but still something that’s destined to let down Knoxville’s dwindling fan base, while never opening himself up to a different audience. It’s baffling to think that someone at a major Hollywood studio thought that Knoxville is a capable leading man in 2018, but here’s Action Point and here we are talking about it.

The year is 1979, and Knoxville stars as D.C., the Schlitz swilling proprietor of Action Point, a dilapidated theme park somewhere in a small town out west that’s basically held together with duct tape and dreams. It makes Adventureland look like Disneyland. His staff – known affectionately as The Shit Birds – is a bunch of drunks, weirdos, potheads, psychopaths, and one randomly responsible kid hired to crunch the numbers. Action Point is hemorrhaging money and unable to pay back a bank loan after a state of the art amusement park opens up thirty miles away. To make matters worse, a dastardly banker (Dan Bakkedahl) is just waiting for D.C. to go out of business so he can buy up the land. That August, D.C.’s daughter, Boogie (Eleanor Worthington-Cox), comes to stay for a chunk of the summer. She loves her dad, and doesn’t have the heart to tell him that mom wants her new boyfriend back in New York to become Boogie’s legal guardian. Wanting to make what could be her last summer with her dad the best one possible, Boogie grows frustrated when D.C. becomes too focused on making the park into a bigger attraction by throwing all the rules out the window and safety concerns to the wind.

The story of Action Point is framed by Knoxville’s character in old age make-up telling his injured granddaughter about his glory days, where people were personally responsible for their own safety and helicopter parenting was non-existent. While that sounds like the musings of a real-life grumbling old man, this general world view is somewhat refreshingly wrapped up with a sensitivity and eye towards inclusiveness. Action Point feels like the worst place in the world to visit unless you want to live out your dreams of actually performing dangerous, Jackass-styled stunts, but it also comes across as a place for everyone. Sure, the staff is a bunch of burn-outs, addicts, and dopes, but there’s a love that they have for each other that makes D.C.’s desire to save the park believable. Knoxville, his staff of way too many screenwriters, and veteran television director Tim Kirkby have made a film about a bunch of outcasts who’ll happily sit down and have some beers with you, provided that you treat everyone respectfully and you aren’t a dick. Outside of that, these people don’t care what you do. These days, that strikes as a nice sentiment that’s in short supply.

Stripped down to its essence, Action Point is two well-worn storytelling clichés rolled into a single film, and while neither contains any surprises, they’re also largely devoid of material that could be deemed problematic by modern audiences. The father-daughter stuff is strongly developed, mostly thanks to a great rapport between Knoxville and his younger co-stars. He’s the typical dad who’d be better as a big brother than a father with a kid infinitely smarter than he is, and he pulls off a lot of the emotional heavy lifting better than he does most of the film’s relatively restrained stunts. That paternal dynamic is also better developed than the wafer thin “slobs versus snobs” stuff with Bakkedahl, which never holds any surprises or real novelty. But I will give Knoxville and company appropriate credit for proving that a period-set gross out comedy can still elicit some chuckles without resorting to outdated, cringe-worthy, period-appropriate language for shorthand. 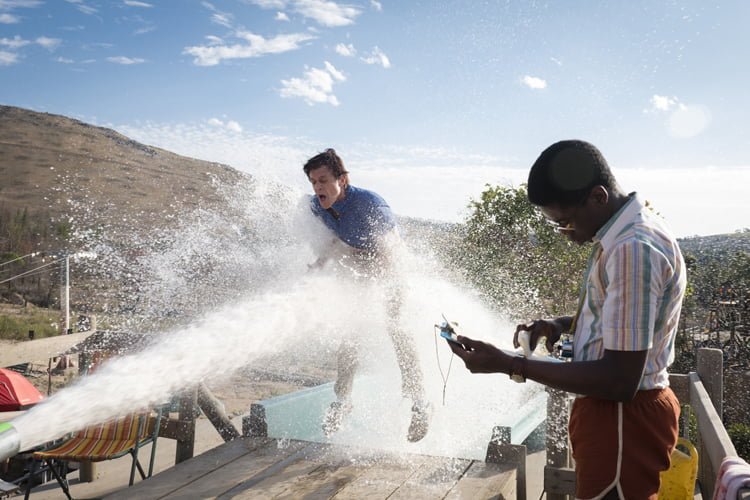 There aren’t many jokes in Action Point that will elicit belly laughs, but there’s more than a handful of hearty chuckles in here. The story is spending so much brain power on making everything feel down to earth that the zaniness waiting to break free from such an outlandish premise (which is loosely based on a real life, long since closed theme park in New Jersey) never appears. Most of the goofy physical comedy is left to Jackass alum Chris Pontius, who plays the park lifeguard and D.C.’s right-hand-man, but even his contributions are based more around elaborate set-pieces than actual stunt work. There are some bits involving an alcoholic bear, Knoxville trying to pick up a porcupine, and a guy in a mascot suit constantly getting into dangerous spots, but most of the stunts and gags here fail to live up to Knoxville’s long dormant reputation of being a white-trash version of Jackie Chan. (Although, this is far better than Skiptrace, a Chinese produced film from a couple years ago that starred Chan and Knoxville together that shouldn’t be viewed by anybody.) Admittedly, Knoxville is looking a bit long in the tooth to be doing some of the things he does here, but he also seems happy to be doing anything at all.

That’s the overall vibe of Action Point: we’re just happy to be here. That doesn’t make for a great film, but it makes for one that’s hard to outright despise. It’s like watching someone who just pulled off a harmless low-brow prank in class, but they’re the only ones giggling uncontrollably over what they’ve done. It’s kinda funny, but not very funny. It’s heart is in the right place at all times, but stories about saving local institutions and already pretty decent dads learning to be better dads are so abundant and cheap that people practically leave them on the curb with hopes a passing screenwriter or director comes by to pick them up before it starts raining.

Action Point is low brow with low I.Q. and a low bar to clear; the kind of thing meant to be watched at a drive-in on a hot night or on VHS at home on a muggy, rainy night with a few beers in you. If this had been made in 1988 instead of 2018, Action Point would probably be looked back on more fondly. Today, its nostalgic world view is more quaint than engaging. It’s not enough, but the effort is somewhat appreciated and commendable.

Check out the trailer for Action Point: