Review: How to Talk to Girls at Parties 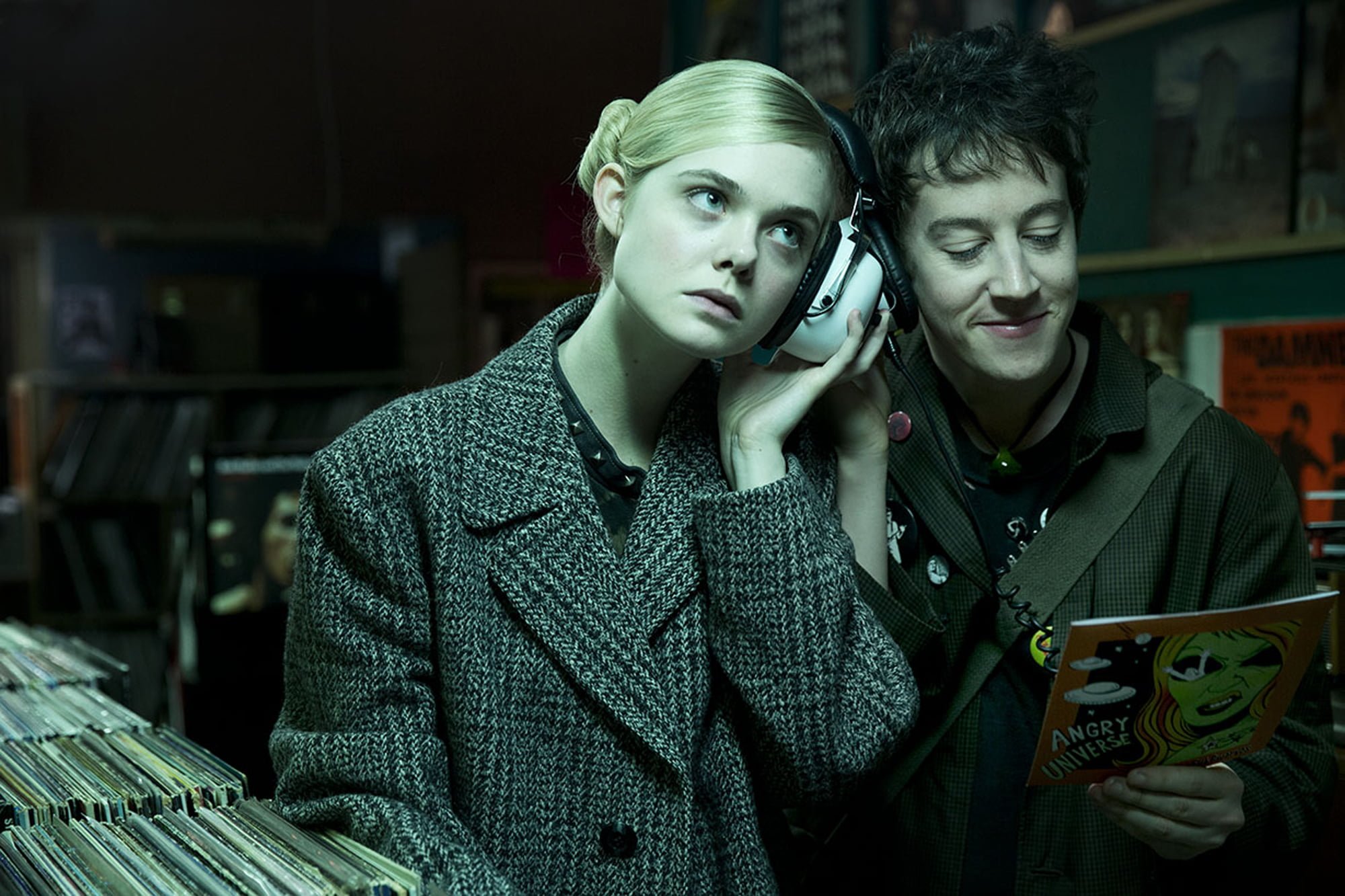 Filmmaker and actor John Cameron Mitchell’s first three films as a director – Hedwig and the Angry Inch, Shortbus, and Rabbit Hole – were remarkable achievements of filmmaking. None of them set the box office ablaze, but Hedwig became a bonafide cult classic, and the other two were solid critical successes. Following another seven year break behind the camera, Mitchell returns with How to Talk to Girls at Parties, a weirdo, sci-fi, period piece freak out that’s based on a short story by popular author Neil Gaiman. And following a scrapped theatrical release date in Canada, it has gone straight to VOD, in spite of Mitchell’s mostly spotless directorial career to date. Sadly, there are some very good reasons why this bypassed the cinemas and why it sat around doing very little after bowing to mixed reviews at the Cannes Film Festival last year. It sounds like a perfect pairing of a filmmaker with material well suited to their off-kilter sensibilities, but the final results only work half the time.

Set in the UK in 1977, at the height of Queen Elizabeth’s Silver Jubilee and all that “God save the queen” nonsense, How to Talk to Girls at Parties follows Enn (Alex Sharp), short for Henry, a shy, teenage punk fan from the downbeat streets of Croyden. He lives at home with his loving, but alcoholic mother (Joanna Scanlan) and a love-hate complex surrounding the father than abandoned them. He loves doodling, browsing record shops, publishing zines, and running around with his best mates, Vic (A.J. Lewis) and John (Ethan Lawrence). One night while on a quest to get laid following a punk show, the lads stumble upon what they think is some sort of artsy party. Enn ditches his friends and meets Zan (Elle Fanning), someone who appears to be a girl, is interested in him, and curious about punk. It turns out that the boys have stumbled upon a cult-like commune of various alien races from different destroyed planets that basically act as tourists for an extended period of time in the preferred vessel of their destination planets before leaving forever. The rebellious Zan, desperate to experience something outside of bland obedience and a potentially awful fate at the end of the trip, has forty-eight hours to spend with Enn, with the boy falling deeper and deeper in love with her during their short time together.

How to Talk to Girls at Parties gets off to a pretty decent start, all things considered. The period trappings are appropriately shabby and stifling, and Mitchell and co-writer Philippa Goslett wisely frame these rebellious lads as kids with nothing to do and not as genuine punks or anarchists. If anything works best about How to Talk to Girls at Parties, it’s all the digs at the late 70s punk scene. No one can describe the music they like or even why they like it. No one seems capable of explaining why they look and act like they do, either. It’s a world full of posers who won’t realize the fronts they’re putting forward until it’s too late.

The rebellious nature of punk has become commoditized and heavily marketed by the time the film starts, leading to a music scene where people are heralded as righteous geniuses one moment and callous, written-off sell outs mere months later. This splitting of the music scene is best exemplified by Martin Tomllinson (who also co-wrote some of the film’s original songs), as a magnetic, uncompromising lead singer and Nicole Kidman, nicely turning things up to eleven and adopting Michael Caine’s speech pattern, as an aging punk who’s upset about being left behind in Croyden by her peers. The visiting alien species also nicely reflect the coming of the New Wave to the UK, effectively signalling the death of punk as they all know it once and for all.

Oh so briefly at the beginning there’s hope that Mitchell might be returning to the visual, musical, and satirical glories of his first film, but incrementally it becomes apparent that Gaiman’s source material can’t handle such weightiness, eventually devolving into something borderline unpleasant.

The romance between Enn and Zan is purposefully eclectic and weird, and is served nicely by Mitchell’s penchant for gonzo, inexplicable imagery and theatricality. Mitchell’s direction of the material serves Sharp nicely because the young actor is otherwise bland. It’s not so much that Sharp has nothing to work with, but that everything Enn has to offer as a character is archetypical and done to death. Then again, the point to all of this might be how Zan brings the exceptional out of Enn, which explains why Fanning is able to blow her co-star virtually off the screen, despite her playing a character that always speaks in stereotypically monotone alien sentences. Fanning jives perfectly under Mitchell’s vision, but it’s a shame that they didn’t have something better to collaborate on. 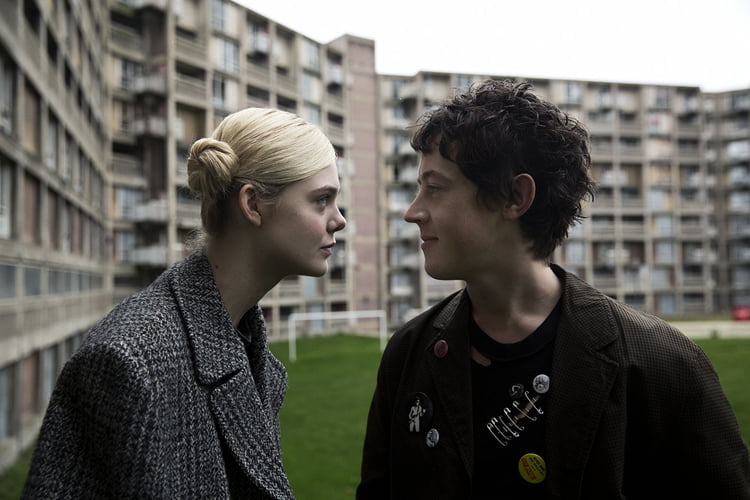 How to Talk to Girls at Parties starts to settle into a corny vibe that runs counter to the rebellious story that it thinks it’s telling. Enn realizes the fallacy of punk and his mother’s difficult situation through the power of love. Zan learns that being human isn’t all it’s cracked up to be. They both learn the nature of personal responsibility. All really corny and dodgy stuff, but that’s nothing compared to the film’s weak sense of humour, which is exemplified via a go-nowhere subplot involving Lewis’ bleach blonde punker and a sex craving alien (Ruth Wilson, who’s admittedly quite good) that feels straight out of an Austin Powers rip off. The gross out gags (with the exception of a moment where Fanning licks her own vomit off her face) and heartfelt beats pile up with almost none of them hitting. The story isn’t great, but it’s vastly preferable to the dull edged attempts at humour and pathos.

Not content with allowing the visiting aliens to be weird for the sake of being weird, Mitchell is forced into fleshing out and racing through an entire backstory that places the leading lovers’ relationship into curiously specific peril and the audience into emotionally manipulative territory without first building towards it properly. Setting aside that the film is very clearly missing an pivotal scene that would make the film’s biggest plot twist make any sense, the rest of the conclusion is the work of a film that’s explaining way too much in order to sound smart and deep. And the less said about the film’s final scene – a shameless, blatant, and cringe-worthy shrine to Gaiman’s ego – the better.

How to Talk to Girls at Parties feels every bit like a film that wasn’t ready to go into production, but they went ahead with it anyway. There are flashes of a better, more entertaining and moving film at every turn, but these flashes never go anywhere, the emotions never materialize, and the fun is stunted by a climax that suddenly decides that we need to feel melancholic about everything that came before it. The visuals would have been nice to see on the big screen (and thankfully I did when the film had a one time screening at Inside Out in Toronto last week), but the rest of this really does belong in the VOD wastelands.

How to Talk to Girls at Parties is available on VOD in Canada on Tuesday, June 5, 2018.

Check out the trailer for How to Talk to Girls at Parties: