Paring the original concept of its parent franchise down to its barest essence, transplanting the story to a different city, and swapping out smooth talking dudes for tough talking, fully capable women, Ocean’s 8 feels familiar and slightly off at the same time. It’s still a breezy, crowd pleasing bit of entertainment, but one that feels like it isn’t fully living up to its potential to take a lucrative star-studded property in a fresh new direction.

Recently released following a five year prison stint, Debbie Ocean (Sandra Bullock), the sister of notorious con man and thief Danny Ocean, sets into motion plans for her most ambitious criminal enterprise yet. Partly as a means to get revenge on the art dealing ex-boyfriend (Richard Armitage) that sent her up the river, her plot involves stealing a six pound, $150 million Cartier diamond necklace that hasn’t been publically viewed in over fifty years. Her plan: convince a down on their luck, deeply in debt fashion designer (Helena Bonham Carter) to help them dress one of Hollywood’s hottest and most difficult stars (Anne Hathaway) so the actress can wear the high profile jewels to the prestigious Met Gala, where Debbie and her cohorts will steal the heavily guarded piece right off the actress’ neck. With the help of her former partner-in-crime, Lou (Cate Blanchett), they begin to put together a team capable of pulling off such a delicate operation, including a pothead hacker (Rihanna), a frustrated jeweler (Mindy Kaling), a fence hiding out in suburbia as a family woman (Sarah Paulson), and a streetwise sleight-of-hand artist (Awkwafina).

Directorial duties for Ocean’s 8 fall to Gary Ross (Pleasantville, Seabiscuit, The Hunger Games), who also co-wrote the screenplay alongside Olivia Milch. Compared to the previous, testosterone driven trilogy from Stevhen Soderbergh (who returns as a producer), Ross brings no discernible visual style. Ocean’s 8 isn’t nearly as flashy, slick, and streamlined as its predecessors, but that kind of feels like the point, and the porting of this spin off to New York from Las Vegas becomes a huge part of this film’s tonal identity.

Ocean’s 8 replaces the frat boy, Vegas swinger slickness of Soderbergh’s films with a New York sense of duty and professionalism. While George Clooney’s Danny Ocean was a fun loving gadabout con man, Bullock’s protagonist doesn’t suffer fools easily and remains constantly focused on the heist at hand. Soderbergh’s films were about pulling off elaborate heists while having some fun along the way. Ocean’s 8 is about getting things done and not making a ton of jokes about what’s going on. The cuteness of the previous films has been replaced by an unwavering commitment on the part of the heist participants. It’s not that Ocean’s 8 is a humourless film; far from it. There just aren’t as many laughs and irreverent, outlandish asides, and while some might see this as Ross taking the spice out of the franchise, I have to admit that the film’s adherence to getting shit done strikes as a refreshing counterpoint to the previous Ocean’s films. 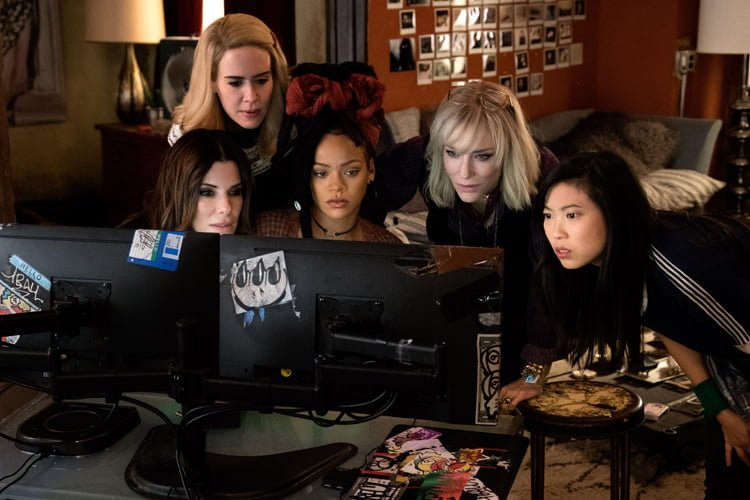 And while it’s unquestionably awesome that this is a caper flick with all female leads, there’s not much that Ross and company have to say about this revolutionary casting decision outside of a scene where Debbie tells Lou that they can’t have men on the team because their job requires them to stay out of sight and out of suspicion. “A him gets noticed. A her gets ignored.” Outside of a humorous moment where Debbie delivers an amusing speech to her team about the importance of their mission, that’s it in terms of crafting any sense of gender equality within the criminal world, but Ocean’s 8 doesn’t seem that much concerned with any of its other plot or character details, either.

There are dinosaur sized plot holes and weirdly shifting character quirks in Ocean’s 8 that can’t be hidden no matter how hard Ross and company try to shrug them off, only making them worse by drawing open attention to them. There are plenty of “a-ha!” and “gotcha!” moments along the way that are successful, but just as many seemingly important victories and setbacks that are moved on from so quickly and easily that one wonders why they’d even be brought up in the first place. Overall, the core heist is worth investing in – despite the fact that it’s tonally very similar to Danny’s revenge plot from Soderbergh’s first movie – and the lapses in logic and storytelling never distract from the fact that Ocean’s 8 just wants viewers to enjoy themselves for a couple of hours.

Bullock and Blanchett are well paired as each other’s yin and yang, but the film might have worked a little better if their performances have been swapped, since Bullock is playing the lead as tough and uncompromising, and Blanchett gets to play the smooth, unflappable accomplice. Hathaway is clearly having a blast, playing up megastar vapidity to the highest degree of camp possible without devolving into parody territory. Carter, who hasn’t had a part this fun and subtle in a while, steals a fair number of scenes with a blend of twitchiness and aloofness. Paulson and Kaling get some nice moments here and there, but have the least to do overall. Rihanna and Awkwafina have the comic relief parts, and they’re also the most electrifying characters to follow, making them the biggest standouts from the cast. And while Armitage gets saddled with a weak, blandly villainous role as the male performer with the most screen time, James Corden (who like Blanchett hasn’t had a part this good in ages) makes a decent impression when he pops up late in the film as a nosy insurance investigator.

Overall, Ocean’s 8 isn’t a total reboot that takes the franchise in a fresh, feminine direction. It comes across every bit like a pretty decent fourth entry in a continuing franchise. I’m sure that’s the point, but the swap in settings to a more hectic, tough talking locale makes more of a difference than the casting swaps. But while Ocean’s 8 isn’t a groundbreaking or revolutionary bit of summer blockbuster fodder, it’s still a pretty darn good time at the movies. Ocean’s 8 subscribes to a form of blockbuster filmmaking philosophy that I think we’re going to see a lot more of in the future: “If it ain’t broke, don’t fix it, but remember to keep swapping in new parts if you want it to keep running.”

Check out the trailer for Ocean’s 8: