Hotel Artemis, the directorial debut of producer and writer Drew Pearce, hits the B-grade-action-movie sweet-spot between inventive, crazy, and mindless fun. Deeply indebted to John Carpenter and John Wick in equal measure, Hotel Artemis is a messy, shaggy dog of a futuristic siege film that blends old school Art Deco design with futuristic gambits that can get people out of any dodgy situation. It’s a wild ride that audiences rarely ever get these days, and if it stuck the landing better, Hotel Artemis would be a stone cold classic.

It’s June 21, 2028, and the city of Los Angeles is experiencing the worst rioting in history, spurred on by a multinational corporation shutting off almost all water and power. Amid the increasing chaos in the city sits the Hotel Artemis, where for the past twenty-two years, a burnt out, alcoholic doctor (Jodie Foster, making her first on-screen appearance since Elysium four years ago) and her hulking, muscle-bound nurse, Everest (Dave Bautista), have been running an underground, members-only hospital for injured criminals out of an abandoned, once opulent Art Deco hotel. Thanks to the unrest outside, it initially appears to be a quiet night at the Artemis, but things quickly change with the arrival of a bank robber (Sterling K. Brown) and his gravely injured brother (Brian Tyree Henry), who in the middle of a heist gone wrong stole a pen from a security guard that just so happened to be hiding $18 million in diamonds belonging to the most powerful gangster in the city; a man who just so happens to be the hospital’s primary funder and beneficiary.

The already sticky situation is compounded further by the fact that aforementioned “Wolf King of Los Angeles” (Jeff Goldblum) has been injured, and his edgy, apoplectic son (Zachary Quinto) demands the last remaining bed in the hospital for dear old dad. The Mafioso has been intentionally injured by an assassin (Sofia Boutella) already staying at the Artemis, who wants to finish the job so her wealthy client can watch “the Wolf King” die. This is a problem since – much like the hotel for hitmen in John Wick, The Continental – the doctor runs a tight ship, and no criminal activity can be carried out on hospital grounds. If the bank robber’s brother is discovered, “the Wolf King” and his goons will execute everyone in sight.

And that’s not all. There’s also an uppity, arrogant arms dealer (Charlie Day) who complains about everything and is desperate to get out of the hospital before the rioting comes to their door, and the doctor and her orderly have a disagreement about treating an injured police officer (Jenny Slate) with connections to the physician’s tragic past.

In the tradition of Assault on Precinct 13 or Escape from New York/L.A., Pearce has crafted the kind of action film where tension will be continually ratcheted up until shit finally hits the fan in spectacular fashion. As one can tell from the above description of the abundance of plot and character contained within Hotel Artemis, there’s a lot going on, and not all of it is necessary. Slate’s character in particular feels like gambit designed to heighten the hospital’s sense of danger and loose morals, but it doesn’t go anywhere and ultimately adds very little that couldn’t have been done without a few extra lines of dialogue. Similarly, Day’s “comic” relief (I use quotes because the character is almost too purposefully repugnant to be funny) is similarly wasted, forgotten about for large portions, and ultimately misused save for a MacGuffin that he’s been carrying around in his wallet. Goldblum’s part amounts to basically little more than a well played cameo, and the arc of Quinto’s frightened, but power hungry son feels curiously truncated. 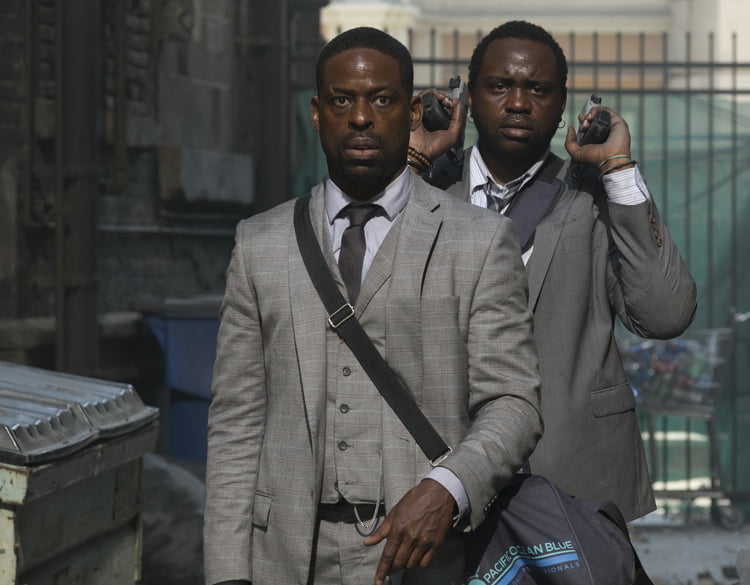 Then again, these kinds of characters are par for the course in a classic Carpenter film, which I assume was the idea Pearce had in his head the entire time. Not every ingredient in a stew like this will have an overpowering flavour, but occasionally they add a nice bit of contrast to everything else that’s going on. Hotel Artemis is a mood piece with an all star cast not afraid of getting gritty and silly at the same time. There’s a lot of plot but not a ton of substance, and the focus here is more on the action beats, one-liners, and performances.

Foster, made up here to look like she hasn’t given a fuck since the Clinton administration, has the perfect amount of star power, acting chops, and personality to anchor the film’s squeaky sense of humanity, and her pairing alongside the scene stealing Bautista (who continues to impress as an actor) is an inspired bit of casting. Brown nicely fills the shoe of the closest thing Pearce has created to an “everyman” character and a de facto hero. Boutella is having a ball playing a sexy ass kicker. Everyone – even those with the more thankless roles already mentioned – bring their A-game to Hotel Artemis, and the film benefits exponentially from their efforts.

The plotting is a bit clunky, but Pearce makes sure that there’s always something to see and that the pace stays constant throughout. Hotel Artemis keeps building and building with increasing novelty and storytelling insanity that one starts hoping the climax of the film will be a go-for-broke extravaganza.

Sadly, Hotel Artemis never builds to that crescendo, and obvious comparisons to the similar world building in John Wick make the resolution suffer. Pearce builds to some capably mounted action set-pieces at the end – including one where Boutella defends a hallway full of baddies with a handful of knives and another with Bautista swinging a fire ax like he’s Babe Ruth – but the finale comes in such a truncated, obviously cost cutting form that one can’t help but ask “is that it?”. Everything feels like it wraps up because someone told Pearce it had to, not because he wants to.

If the conclusion to Hotel Artemis was even half as ambitious, creative, and crazy as everything that came before it, Pearce would have an all time cult classic on his hands. Instead, he’s made an okay bit of popcorn movie fodder with a great imagination and not enough space to contain it all. Still, these kinds of movies don’t need to achieve perfection to succeed, and overall action movie buffs will likely get exactly what they need from Hotel Artemis.

Check out the trailer for Hotel Artemis: