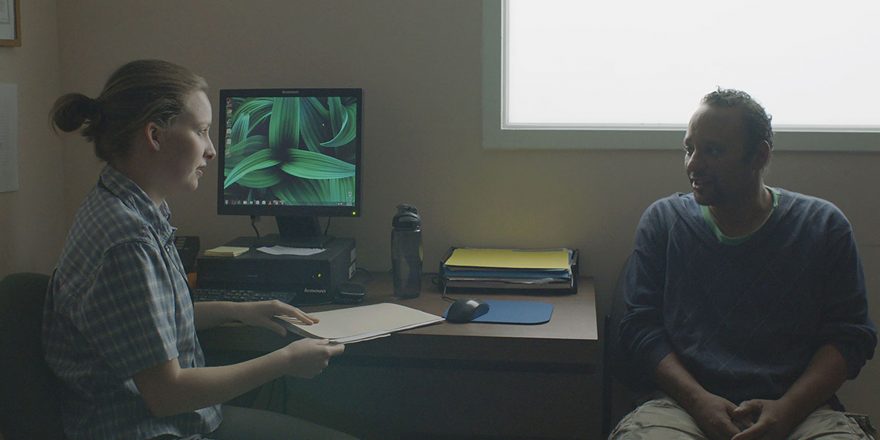 Canadian filmmaker Antoine Bourges’ subtly moving debut feature Fail to Appeal is so confident, lived in, and well researched that one would be forgiven if they mistook it for a documentary. Furthering the socially conscious leanings of his prior, but equally exceptional Vancouver based shorts East Hastings Pharmacy and William in White Shirt, Bourges’ latest transplants the filmmmaker’s restrained, ethical, and empathetic eye to Toronto for a look at the lives of people navigating two very different sides of the mental health court system with similarly conflicted emotions.

Deragh Campbell plays Isolde Maxwell, a case and support worker for a Toronto drop-in centre who functions as an advocate for clients with mental health issues that have fallen on hard times or have become caught up in the legal system for minor offenses. Isolde is taking on clients of her own, but she’s still fresh out of a training period. Eric Edwards, played by Nathan Roder, is one of Isolde’s clients: a shy 33 year old man with no history of violence facing two charges of theft from the same shopping mall and one charge of failing to appear for a previous court date.

Bourges structures Fail to Appear like a venn diagram, beginning by spending time solely in Isolde’s world, then a section with the two main characters together, and ending in Eric’s world. What emerges is a picture of loneliness, frayed nerves, and a subtle fear of judgment that extends well beyond the courtroom. It also makes a usually hard to understand world that’s not often seen outside of the people who live within it understandable and accessible without over-explaining or resorting to melodramatic shorthand.

Isolde’s career as a case worker is only starting, and her body language (complete with a face that tries not to show more than a modicum of emotion) and frequent pausing in the middle of sentences suggest someone trying desperately to make an impression by staying as professionally stoic as possible. In her line of work, grand displays of emotion could lead to cynicism and professional burnout whenever one of her clients has a setback. She wants to do well by her clients and colleagues, which means her outward appearance has to be strong, but it’s clear just by looking at her that her hardness is only surface level. Bourges never spoon feeds the audience this assessment of Isolde’s job status, but has faith that they’ll be able to understand the delicate and emotional nature of her employment if they wrestle with it for a while and pay attention to the small details. 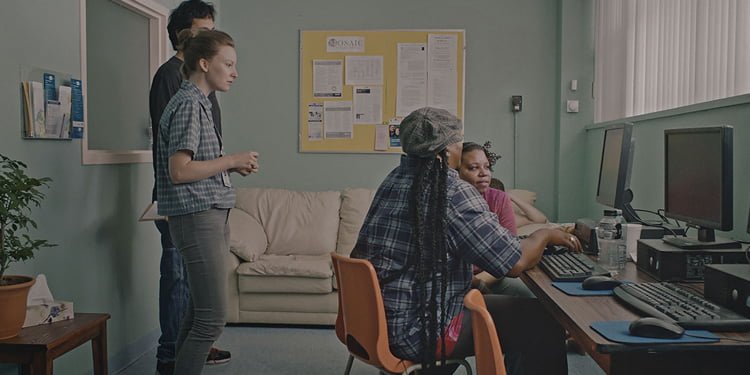 The setting of Fail to Appear is immediately identifiable to anyone who has ever volunteered, worked at, been enrolled in, or had a loved one referred to one a facility or service like the one Isolde works at. Having previously studied the relationships between caseworkers and clients when he was working as a filmmaker in Vancouver, Bourges also prepared Fail to Appear by performing eighteen months of research of similar systems in Toronto. The film is populated throughout by non-actors that Bourges met while performing his research. In this respect, Fail to Appear not only retains a sense of authenticity, but an emotional awareness and intelligence that’s akin to information being delivered by an expert on a subject who picked up a camera and decided to film their reality with no frills or embellishments whatsoever.

Campbell’s work here is nothing short of revelatory. Although she’s been great in films before this one, Fail to Appear showcases an astounding emotional range within a character that’s basically stoic. She has clearly studied the kind of distancing empathy that a caseworker needs to have with their client, and her work is just as impressive as Bourges’ direction. Through Isolde’s low-key skittishness and a perceived lack of confidence in her abilities by the point the audience meets her, Campbell’s caseworker becomes a perfect reflection of her primary client in the film.

After Eric’s court date and their subsequent interaction following his release on bail to talk over next steps, the pair share a lengthy, nearly wordless train ride, barely acknowledging each other. In this moment, it becomes clear that her job is allowing her to identify with the loneliness of her often misunderstood clients. Few quiet moments speak as many volumes in films this year than the single subway ride just past the midway point of Fail to Appear.

If Isolde is in danger of closing herself off the potential harshness of the world, then Eric understands it far too well. Most of his first day out on bail is a solitary affair. Living in his parents basement, Eric is the kind of person many privileged types unburdened by the troubles and ravages of the world would write off as an everyman at best and a loser at worst. But by spending time in Eric’s loneliness, Bourges makes the viewer witness how extraordinary this man is. He might have outbursts in the outside world to the point where he could be classified as disabled, but he’s also a musical virtuoso, largely unable to share his compositions on the violin, keyboards, and drum machine with anyone outside his home. His parents seem attentive, but frustrated and unable to figure out what to do with him. Every bit of positive reinforcement that Eric gets comes from within, save for one kind gesture from Isolde late in the film. Roder portrays Eric as someone in danger of fading into his own dimly lit background, but also as strong, capable person that shouldn’t be looked down upon.

With Fail to Appear, Bourges has created something that’s virtually impossible to do outside of a vérité documentary. This is a film set in and around the mental health care industry that never once attempts to diagnose, analyze, or skew what’s happening. Bourges is savvy enough to know that the audience will likely draw their own conclusions about Isolde and Eric, but he flat out refuses to give any answers. The filmmaker wants to put viewers in the shoes of both characters and ask for an understanding of their social and professional situation without judgment. Like a good caseworker, Bourges wants to place the emphasis on people first and foremost, and proves that human nature can be just as complex, confounding, and uncertain as the legal system. Like Bourges’ previous short films, Fail to Appear is a work of subtle emotions, complex themes, and overwhelming empathy.

Check out the trailer for Fail to Appear: