The best sequels inform, enhance, and extend their predecessors in creative, daring, and unexpected ways. Pixar and returning writer-director Brad Bird’s Incredibles 2 is one such sequel, offering fans of one of the animation studio’s best offerings an uninterrupted continuation of the first film with a whole new set of enhancing character traits, plot wrinkles, and themes. On an entertainment level, it’s the most satisfying major studio blockbuster of the summer movie season thus far. On a storytelling level, it’s a sequel that’s virtually on par with the original. And on a technical level, it’s Pixar’s most elaborate and gorgeous achievement to date.

Set in the early 1960s, not long after the events of the first film and in a world where superheroes are still outlawed, the Parr family, a.k.a. The Incredibles, are still doing their best to save the earth from a variety of supervillains and criminal masterminds, despite the repeated attempts by politicians and the media to brand their sometimes messy form of heroism as a nuisance. They’re also stuck living in a crappy motel following the events at the end of the first movie, and the family’s tenuous connection to the U.S. government is about to come to an end. A chance to turn their bad luck around and get back to their crime fighting ways arrives in the form of Winston Deaver (voiced by Bob Odenkirk), the head of a major telecommunications company and a self-professed superhero-superfan that wants to help “make superheroes great again.” Deaver, with the help of his sister, Evelyn (Catherine Keener), looks to Helen Parr (Holly Hunter), a.k.a. Elastigirl, to remind people of the difference heroes can make in the world. Seeing Bob (Craig T. Nelson), a.k.a. Mr. Incredible, as potential insurance liability, Deaver makes Helen’s saving of the world a solo quest; one that grows more difficult when the city finds itself in the mad grasp of The Screenslaver, a masked villain who can take over any screen and hypnotize unsuspecting people into doing horrible things. In Helen’s absence, Bob is tasked with staying home and dealing with the family matters Helen normally deals with, including Dash’s problems with schoolwork, Violet’s boy troubles, and infant Jack-Jack’s emerging and uncontrollable super powers.

Bird (bouncing back nicely from the well intentioned flop, Tomorrowland) picks up with Incredibles 2 as if no time has passed at all. Opening with a thrilling sequencing involving the family doing battle across the city with a mole-like bank robber, Incredibles 2 doesn’t waste any time reminding viewers who the characters are or their relationships to each other. Incredibles 2 hits the ground running and rarely lets up for most of its two hours. Every ounce of energy is placed on spectacle and a sense of moving forward, and little is placed on cutesy callbacks or overbearing reminders of the previous film. To use a well worn chestnut, the game has changed greatly, but the players are the same.

Immediately, one is struck by how much Pixar’s animation technology has evolved between the time of the 2004 original and today. While The Incredibles was certainly no slouch in terms of delivering artful wonderment, Incredibles 2 is a quantum leap for the studio. The cinematography is more confident, assured, and capable of capturing large scale action and potentially iconic images than most of its live action counterparts. Take the animation aspect out of the equation, and the fluidity of motion throughout Incredibles 2 looks like what might happen if Roger Deakins somehow got the chance to shoot a brightly coloured, period set, superhero movie. The action sequences, attention to detail, and overall use of colour and artificial lighting raise the bar for future projects from other animation studios exponentially, possibly so high that Pixar might not be able to compete with its own future output after this. On a visual level, Bird and his tireless team have reached the pinnacle of animation thus far, rivaled only potentially by Miyazaki, who is certainly artful, esteemed, and thoughtful, but who has never made a film as clear in design as Incredibles 2. This is a big screen animation experience in the truest sense, lovingly crafted across the board. 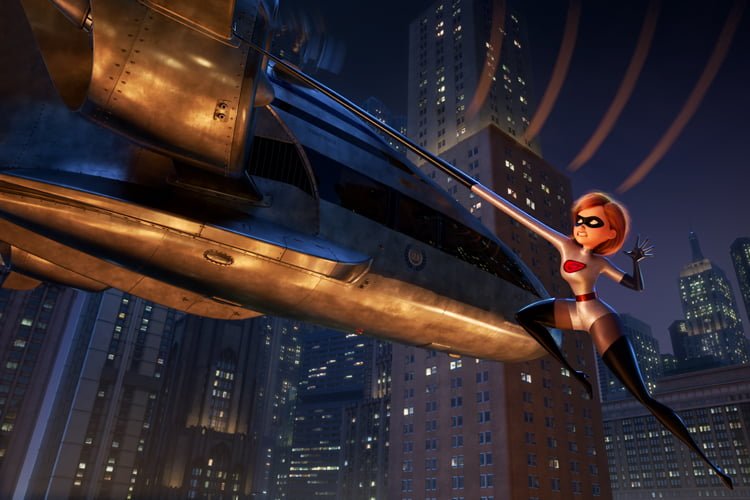 Bird’s storyline suffers somewhat from an affliction that a majority of Disney and Pixar films have succumbed to in recent memory: a reveal of the villain’s secret identity that isn’t particularly shocking or surprising. But the rest of Incredibles 2 does an exemplary job of making sure that the storyline isn’t a high-spot laden rehash of the first film, offering up a healthy serving of freshly prepared modern subtext on the side.

The overall darker and more pessimistic tone of Incredibles 2 comes with some intelligently constructed signposts outside of the obvious one revolving around a villain that’s disgusted by people being glued to their screens all the time. Although such an understandable and borderline sympathetic villainous sentiment is more at home in the digital age than it might be in the period trappings of Incredibles 2, it still works as a backdated metaphor for the further rise of television. That sense of “the more things change, the more they stay the same” extends to the film’s other thematic throughlines, most notably in how Bob is forced into wrestling with his own masculinity and agency after his wife is proven to be a better superhero. Similarly, Helen has trouble adjusting to a work-life balance, often fearing that she’s forsaking one for the other. The most interesting of these modernly relevant thematic threads, however, might be the one involving Odenkirk’s idealist, whose desire for a safer world is contingent on reminding people how terrifying the world has become.

There are subplots where Bob tries valiantly to help fix issue between teenage Violet (Sarah Vowell) and her crush that he created, and a lot of time spent on him trying to stay one step ahead of the increasingly rambunctious and curious Jack-Jack, but those are mostly on hand to keep things light and fun. Between those asides are plenty of overt and hidden ideological back-and-forths to engage the audience beyond a mere presentation of eye candy, sight gags, and one liners (and even some not too thinly veiled digs at the modern nature of superhero movies and the dark, dourness of the D.C. cinematic universe).

Incredibles 2 accomplishes its perfect balance of style and substance with focused and relentless energy. This isn’t a sequel that’s falling back on good will and good feelings. This is Brad Bird and company doing everything in their power to outperform the bar they set with one of the best animated films of the century thus far. Do they surpass those lofty goals? I assume that will be a matter of some debate, but personally I haven’t been this dazzled, moved, and provoked to thought by any superhero sequel since Sam Raimi’s Spider-man 2, the other truly great blockbuster of 2004. Should we see another outing with the Parr family again in the future, let’s hope the filmmakers keep pushing themselves and the art of the medium to even greater heights.

Check out the trailer for Incredibles 2: