Review: Becoming Who I Was 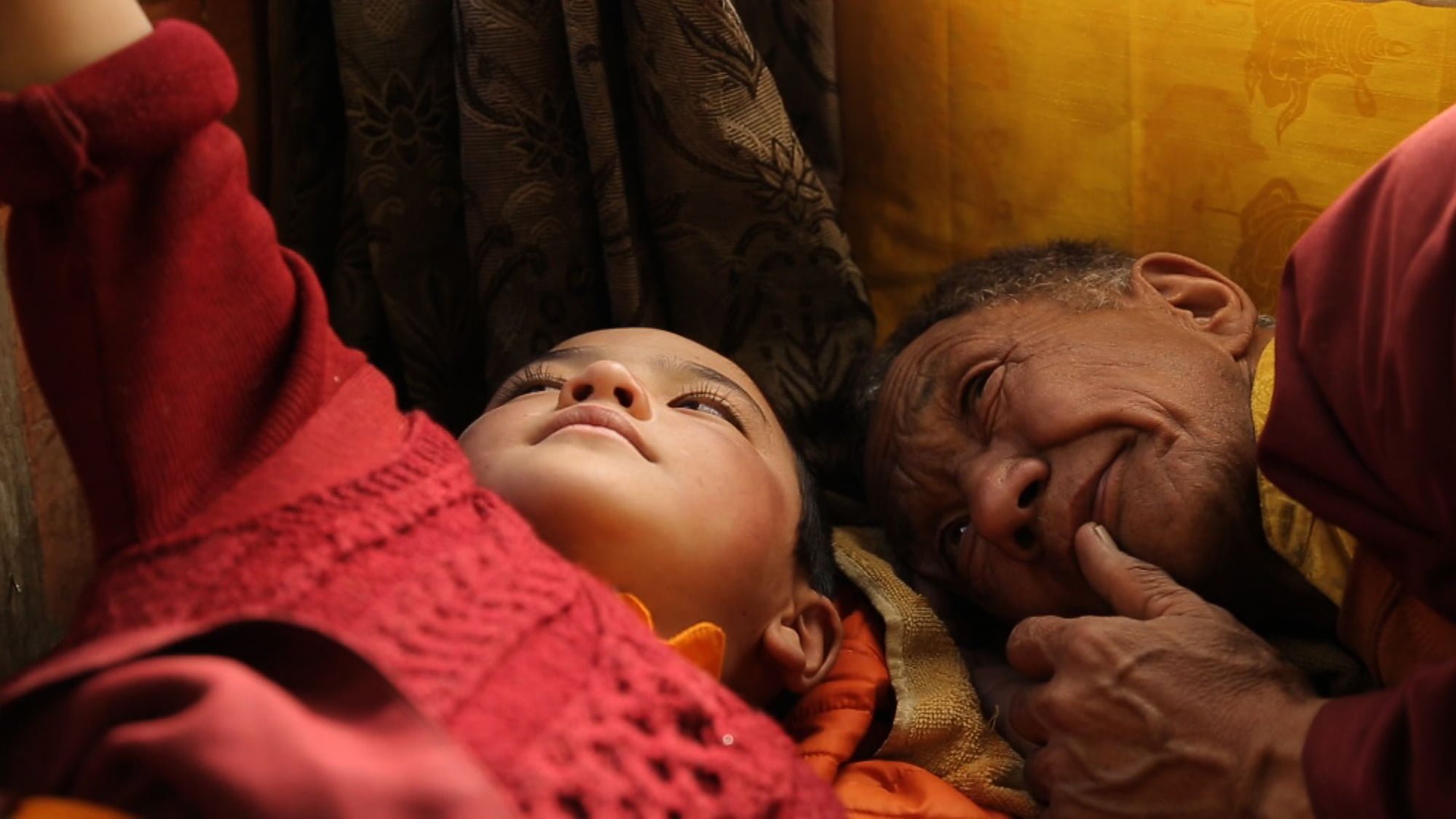 A quietly restrained emotional rollercoaster contained within an in-depth sociological case study, the documentary Becoming Who I Was offers a look into the scars left behind for an entire uprooted and banished culture and how even the most seemingly serene of religions can be imperfect and borderline unjust. Director Moon Chang-yong and co-director/producer Jeon Jin’s look at one young Buddhist boy’s search for self and quest for enlightenment in the mountains of India is a work of great complexity, cultural specificity, and intense emotional response, but there’s still a sense that something’s missing and that the film’s narrowed vision can’t contain everything that’s happening.

Five year old Padma Angdu lives in a remote Buddhist community in Ladakh, located within the borders of the Kunlun and Himalayan mountain ranges. Padma has been deemed a Rinpoche, the reincarnation of an important Lama from Kham in Tibet. Padma speaks of his memories from a previous life, and initially the young boy is revered. Unfortunately, in accordance to Buddhist culture, no one from Kham arrives to claim Padma as their own, and the young boy is effectively ostracized, ridiculed, and branded a fraud by many locals. Unable to stay and study in his community, Padma is cared for primarily by his uncle/godfather Urgain, a travelling doctor and healer who puts his life and career on hold to care for the young child. Padma’s future remains uncertain. He’s not accepted in Ladakh, but a combination of Chinese repression and control over Tibet and the inhospitable terrain separating him from Kham makes the journey to his spiritual homeland nearly impossible. Even if Padma were to complete the journey to Tibet, his life as a monk would be in constant danger thanks to Chinese rule over the country.

Since premiering on the festival circuit last year (including screenings at Hot Docs and Berlin), Becoming Who I Was has been referred to by many as something charming and spiritually uplifting. While I agree that Chang-yong and Jin’s film is well worth seeing, all I was able to take from Becoming Who I Was is a sense of being emotionally gutted from start to finish. Running counter to the common, more genteel narratives of Buddhism on screen, Padma’s trials and tribulations – which were captured by the filmmakers over the course of eight formative years – amount to abject cruelty in most cases and outright abuse in some instances. While Chang-yong and Jin rarely capture any of Padma’s religious hazing on camera, the effects are immediately noticed on the young man’s tear streamed face. Here is someone who didn’t really be asked to be anointed as a religious icon being taken to task for having the audacity to live – by political and geographical circumstance – outside the area where he should be called upon to serve. That’s not charming or uplifting as many critics have branded it. That’s harsh, but also something that needs to be seen for the young man’s story to have some eventually uplifting warmth.

Outside of Padma’s friends, his caregiver, and his rarely glimpsed mother, Tashi, the community doesn’t seem keen on accepting the young man as a spiritual equal, but there’s a warmth, kindness, and generosity that still manages to shine through. While the psychological toll clearly being taken on a young man who’s too emotionally unequipped to process such complex feelings is resounding, so too is the charity and good karma exhibited by Urgain. Padma’s guardian will do everything in his power to provide for his young ward, while realistically comforting the boy and saving up enough funds to hopefully make the fraught and lengthy journey into Tibet. If Becoming Who I Was mostly feels like a bittersweet and taxing look at one man’s search for spiritual and geographical self, it’s the moments of tenderness and understanding between Padma and Urgain audiences will remember fondest. Becoming Who I Was builds triumphantly to a suitably rousing final third where Padma and Urgain make a two month long trek towards the Tibetan border. This is the section of the film that contains the most charm and warmth overall, but the filmmakers have been keen enough to include moments of emotional release throughout, even if it’s just their subjects sledding through the mountains or remarking about the joy of sitting in front of a warm fire.

But the final section also feels somewhat truncated and plagued by some nagging questions, mostly regarding the overall validity of Padma’s claim to spiritual greatness, how the rest of the young man’s family functions, and why the boy’s status seems to change so frequently within his community. Ultimately, it’s realized that the film was simply building to the literal journey the entire time, but the significance of such a trip beyond the bold faced emotions behind it would be more appreciated. Over eight years, plenty of footage has to exist that could give context to the struggle, and while there probably wouldn’t be room for it all in a single feature film, much of what remains feels one sided for the sake of sending viewers home on a happy(ish) note.

In spite of the flaws and gaps, Becoming Who I Was remains a thoroughly intriguing text about the cultural plight of displaced Buddhists and the specificity of their religion. The boy at the heart of Becoming Who I Was has fallen through the spiritual and political cracks, and although some claim to doubt his deification, Padma’s journey is an unlikely, but potent reflection on the injustices suffered by Tibetan Buddhists on the whole. No matter what feelings one takes from Becoming Who I Was, viewers will be provoked to thought and educated by what they see. It might not add up nicely to the sum of all its parts, but the intricacy of such a film and the efforts to convey those contradictions and religious ideologies is appreciated just the same.

Becoming Who I Was opens at The Hot Docs Ted Rogers Cinema on Friday, June 15, 2018.

Check out the trailer for Becoming Who I Was: