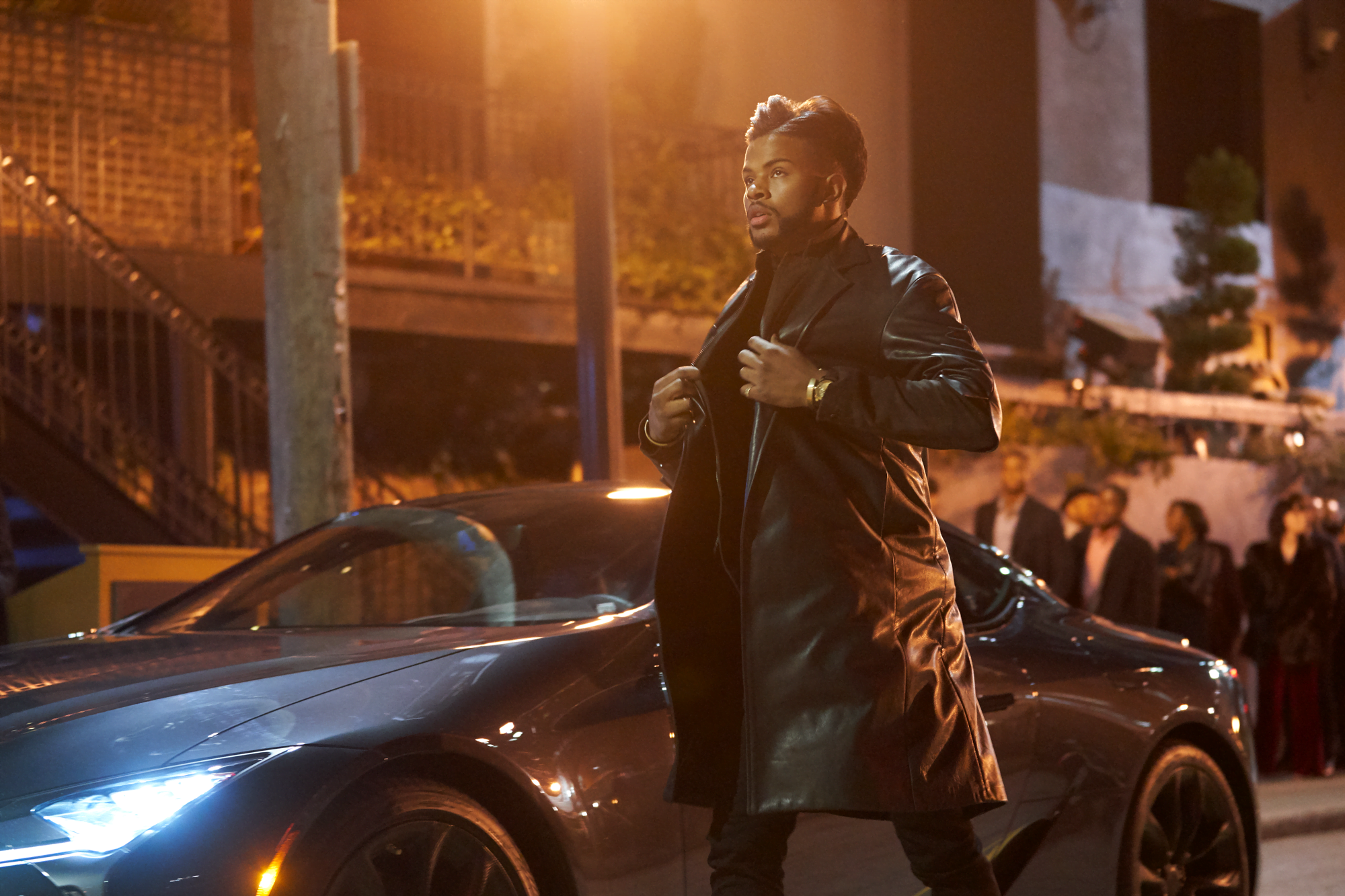 Although lacking in the grit and stakes of Gordon Parks Jr.’s 1972 blaxploitation classic, music video veteran Director X’s modernist updating of Superfly for the trap rap era isn’t without certain charms. Smoother and more sophisticated than the original O.G. Superfly, X and writer Alex Tse’s reimagined look at the life of a cocaine dealer trying to get out of the game has more in common with the 90s revival of similar morality tales than it does with its source.

Priest, played by Trevor Jackson, is a pretty looking dope boy who has risen to the top of Atlanta’s drug trade, mostly by engaging in sound, diplomatic business practices, staying out of sight from the law, and never starting beef with his rivals unless someone comes at him directly. When a hungry, hotheaded young buck (Kaalan Walker) from a flashy, rival gang tries to take him out – inflicting life threatening injuries on an innocent bystander in the process – Priest decides it’s time to get out of the game for good. With the help of his right-hand-man Eddie (Jason Mitchell), Priest concocts a dangerous, but ambitious plan to cut his mentor and supplier (Michael K. Williams) out of his dealings and buy large amounts of weight directly from a cartel supplier (Esai Morales). Priest’s attempts at one last big score are complicated when he becomes targets by his chief rivals, his mentor takes understandable umbrage with being left in the dark, one of his lieutenants (Jacob Ming-Trent) screws up badly, and a pair of crooked cops (Jennifer Morrison, Brian Durkin) commence shakedowns for a piece of the action and profits.

There was a hunger and a desire within the characters of Parks’ original Superfly that lent the film a sense of authenticity and drama. Everyone was struggling to come up in the game, and the world of the characters felt dangerous. Here, in Director X’s flashy world, everyone has already made it to the top of the game, and the only thing standing in the way of greater successes and a shot at the straight life is greed. That’s not only a more glamorized depiction of the drug game – which is problematic in its own ways – but also far less satisfying. There’s little sense here that anything truly terrible will befall Priest. We know that plenty of his friends and co-workers are destined for an early grave (and it’s easy to spot which ones), but we’re never left with any doubt that the smooth talking, impeccably dressed Priest will come out on top in the end. Tse (Watchmen) never finds a way to showcase any true sense of vulnerability in the hero, so while it’s easy to root for him, it’s also impossible to become invested in his plans.

Superfly is more of a reflection of what’s happening in the music industry these days than what’s going on in the streets, because even Priest’s comparatively low key demeanour is enough to probably get him arrested anywhere in the world. This could be chalked up to rapper Future acting as one of the film’s producers. Providing the film’s soundtrack – much of which is quite good – Future seems to be guiding this one on a stylistic level more than Director X. It’s a pretty good pairing of a director with material because Superfly comes off as a vanity project for Future more than it does a remake or a standalone film. The person who stands to make the biggest impression and the biggest gains here isn’t anyone on screen, but Future. 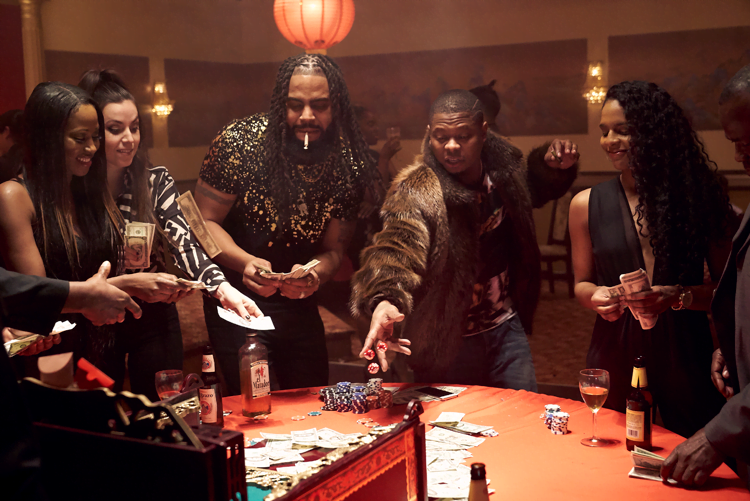 Although Superfly is only his second feature film outing (following the underrated hockey drama Across the Line), Director X has already established himself as a striking visualist. Bathing every scene of Superfly in gold, fluorescents, midnight blacks, and blindingly bright whites and marrying them to the elaborately fluid cinematography of frequent Michael Bay collaborator Amir Mokri, X throws everything he can at the screen. There isn’t a single drab or ugly frame in the film, even when Priest’s journey takes him to a purposefully downbeat looking furniture store. The convoluted plot has arguably way too much ground to cover in just two hours, but X not only understands the importance of quick pacing, but also that viewers will need something visually striking to keep their attention. He’s also not above using sight gags to highlight the sometimes outlandish material, most notably in the look and design of Snow Patrol, which isn’t a nod to the similarly named indie rock band but to Priest’s chief rivals: a flamboyant gang that literally throws money wherever they go and dress from head to toe in clean whites (including all white guns that look like Nerf toys). X understands that some elements of Superfly are deeply silly, and that balance of self-deprecation and smoothness helps the film greatly. That sense of humour helps greatly when over half the film’s dialogue sounds like it was written by someone who read The Art of War half a dozen times while getting stoned out of their gourd.

The supporting cast members each perform their roles admirably, particularly Big Bank Black as the Snow Patrol general and Antwan “Big Boi” Patton hamming it up as mayor of the ATL, but it’s also wasting some great actors in thankless roles. One wishes that Mitchell, who previously dazzled in Straight Outta Compton and Mudbound, had a better part than the stock role of Priest’s best friend. Williams makes an impression as an old timer in the game, but he’s almost too magnetic and overpowering of a presence in the small doses shown here. And Lex Scott Davis turns one of Priest’s two girlfriends from what could have been a thinly drawn character into one of the most interesting people in the film.

And while I’m sure that some blaxploitation purists will be divided on Jackson’s work in the lead, I don’t know how someone can look at this and not see a star making performance. Embodying effortless cool, emotional intelligence, and a primal physicality that can snap on someone at a moment’s notice, Jackson might not be the Superfly everyone remembers from the 70s, but he’s a welcome, fully realized, and charismatic presence on his own. The soft spoken and analytical approach of Jackson’s hero might not jive with what everyone wants on an entertainment level from this sort of thing, but it feels realistic and lived in, which contrasts nicely to the outlandishness around him.

Superfly 2018 isn’t a throwback to classic flicks of the 1970s, but more of an homage to what I like to call “hood philosophy” movies of the 1990s, most obviously New Jack City and Sugar Hill. They were films that spoke lovingly and at great length about the drug trade and illegal activities with a (perhaps misplaced) poetic and intellectual sensibility instead of talking down to the experience. They might have been outlandish films both at the time and today, but there was something captivatingly Shakespearian about them. They became iconic or cult classics in cinematic culture for easily identifiable reasons. And while I’m not sure if this Superfly will achieve similar status with audiences or that it’s going the extra mile to differentiate itself from its older, wiser peers, it’s still fine enough for what it is.

Check out the trailer for Superfly: