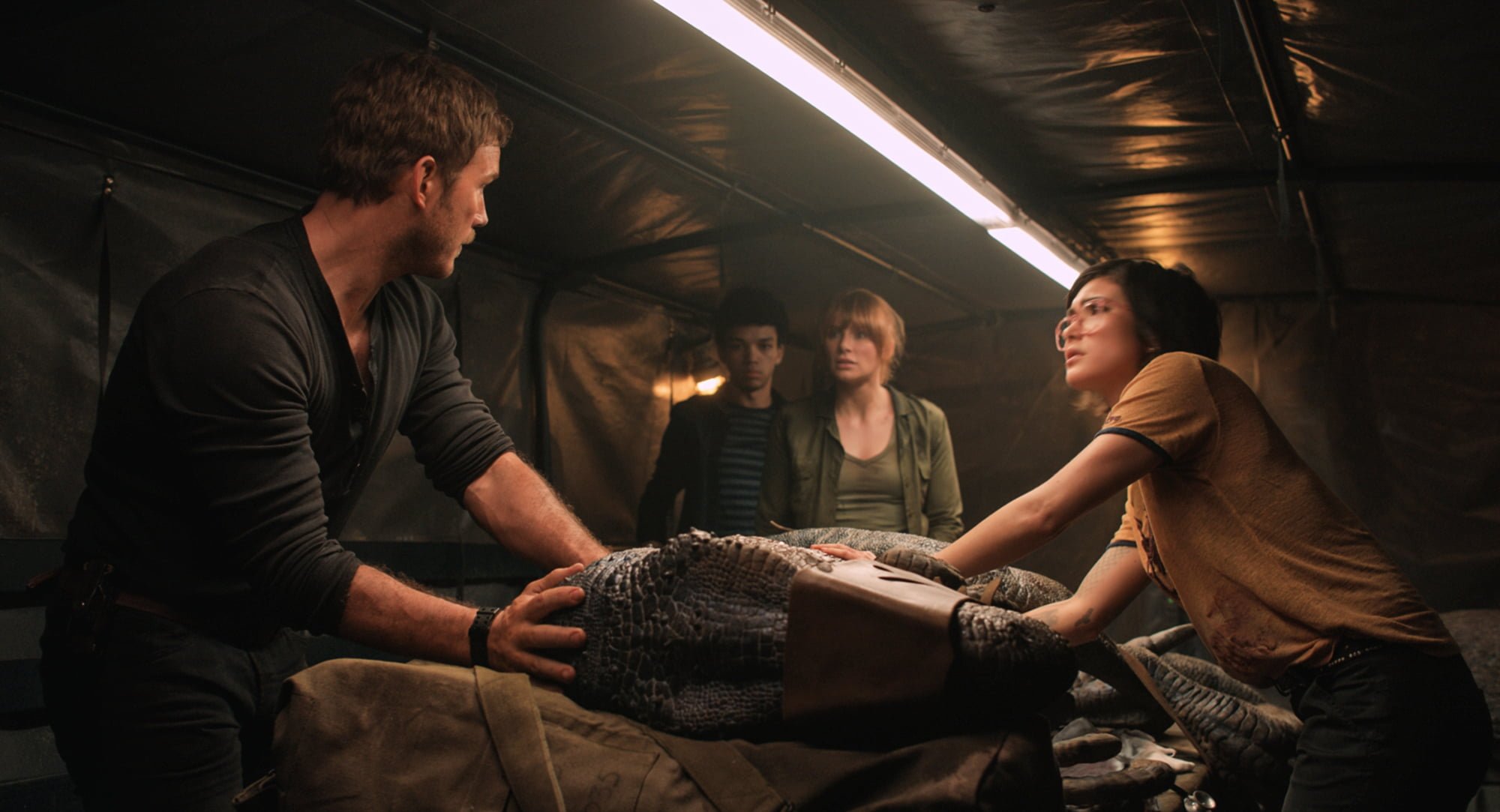 Three years after the rampage that shut down the Jurassic World amusement park in the previous film, a volcano threatens to wipe out the dinosaurs remaining on Isla Nublar (making me wonder why any park designers would ever have thought that opening an amusement park on an active volcano was a good idea, but whatever, moving on). World governments refuse to intervene, preferring that the “act of God” wipe out the dinosaurs that should have been extinct in the first place. Claire Dearing (Bryce Dallas Howard), a former park executive, now works tirelessly as an animal rights advocate trying to save the dinosaurs. Before the volcano wipes out all life on the island for good, she’s propositioned by Eli Mills (Rafe Spall), a man working on behalf of John Hammond’s former colleague and Jurassic World mastermind Benjamin Lockwood (James Cromwell). Mills says they have a plan to save a fair number of the animals from the island and bring them to a secluded sanctuary, but they need Claire’s help and handprint to access the island’s state of the art tracking system, specifically to find Blue, a velociraptor introduced in the previous film that’s described as “the second most intelligent creature on Earth.” But they don’t only need Claire. They also need Owen Grady (Chris Pratt), Blue’s trainer and handler. After Claire convinces Owen to tag along on the mission, they quickly realize that the people that they’ve been asked to work for aren’t altruistic, and that they’re secretly concocting a plan to sell the dinosaurs as weaponized tools of mass destruction to wealthy bidders around the globe, including a new hybrid dinosaur even meaner and deadlier (and way more illogical) than the one in the last film.

It’s immediately apparent from the opening frames that the thrill and grandeur of returning to the franchise is gone. The scope and pace of Jurassic World: Fallen Kingdom has been stripped back and sped up, which could have been a great jumping off point for the kind of B-movie extravaganza that the previous franchise entries were, but those kinds of films need some degree of originality, wit, tension, and technical acumen to pull it all off in a satisfying way. That last part is certainly there, and the creatures of the island are still terrifying and wondrous to behold, but after four of these films, that seems like little to expect. Directing his first and God willing hopefully last film in this franchise, Spanish filmmaker J.A. Bayona (The Impossible, A Monster Calls) takes his threadbare material – provided by Jurassic World director Colin Trevorrow and his frequent collaborator Derek Connolly – deathly seriously, blissfully unaware that he’s working on one of the laziest rip offs in recent memory.

Say what one might about the previous films and sequels, but at least the majority of the set pieces and plot devices were original, novel, or fun to watch unfold. Here, all that’s given back to the audience is a cold rehash of The Lost World and Jurassic Park 3 that has all the flavour of ice cream that melted in the sun six hours ago grafted onto a plot ripped off wholesale from the Alien franchise. Bayona and his team seem to have never met a callback they didn’t like, and constantly jab the viewer in the ribs with a full force elbow to remind them just how entertaining and exciting the previous films were. Aping so many shots from its more effective predecessors that I lost count at number fifteen – approximately a quarter of the way in – Jurassic World: Fallen Kingdom has no desire to be its own movie, but to constantly remind viewers of the good feelings they had from previous successes.

That might work, but only if you go to the movies solely to watch explosions, rudimentary action sequences, interchangeable stock characters, and lengthy scenes of people looking worried and typing on keyboards, explaining what they’re doing to no one in particular like you’re supposed to give a shit and that you’re too stupid to figure it out on your own. Characters don’t do things in Jurassic World: Fallen Kingdom because they need or want to do them; they do things with a resignation that suggests there wouldn’t be a film in the first place if they didn’t do anything. We already have Michael Bay films, the Fast and Furious franchise, and the previous sequels to scratch these primal itches, and all of those have more originality and gonzo gusto than the slop heap that is Jurassic World: Fallen Kingdom. It doesn’t care about giving viewers anything new or exciting to see – building to a climax set at a secluded mansion, which turns out to be the last place on earth I ever care to see dinosaurs playing cat and mouse games with stupid humans – as long as you buy the T-shirt and commemorative popcorn tin before you even get to the theatre. It’s a film made only for people who like to spend money, not for people who actually enjoy going to the movies. 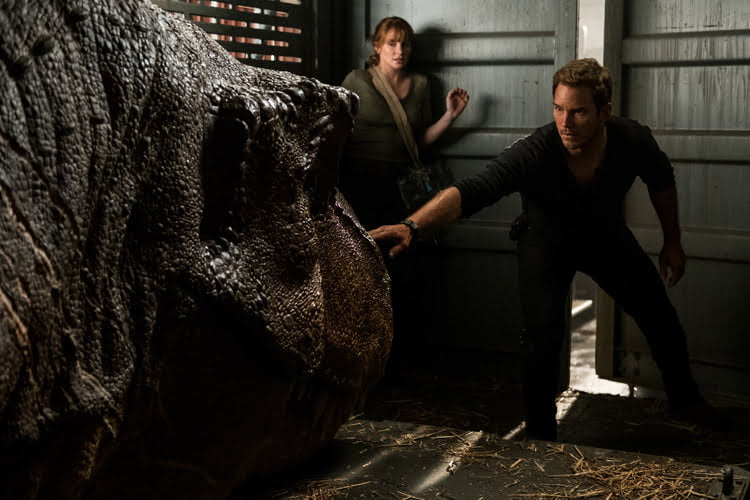 To make matters worse, Bayona’s unsubtle way of handling a story turns a dumb-dumb cinematic blockbuster into a mean spirited epic that thinks cruelty equates to catharsis or substance. His two previous films were guilty of similar dabbling in abject cruelty and despair, but at least there was a semblance of story to hang those feelings from. With Trevorrow and Connolly’s screenplay reading like they cut up the scripts to previous franchise efforts and other successful creature features and drew the scraps from a bag at random, Bayona’s desire to make Jurassic World: Fallen Kingdom into something more meaningful is both wrongheaded and insulting. There are moments – particularly a pair of raptor’s fighting in a child’s bedroom or an unnecessary third act twist involving Lockwood’s precocious, but useless granddaughter (Isabella Sermon) that’s tacked on and tacky – where one can almost hear Bayona patting himself on the back for mustering some tiny amount of obvious symbolism amid the cacophony of sound effects and musical stings. This is a movie that thinks it’s brilliant and that the audience is stupid.

As for performances, there’s not much to speak about. Howard is great at mugging and reacting to the chaos around her, so she might come out of this one looking the best. Pratt looks checked out, leaning heavily into his natural charisma and charm, not having a single clue how to save this thing. Spall and Ted Levine get to play the film’s primary villains, and they’re fine, but not impressionable in the slightest. Claire is given a pair of sidekicks that accompany her to the island, Zia, a paleontologist of some sort played by Daniella Pineda, and Franklin, a skittish systems analyst played by Justice Smith. Of those two the former is vastly preferable because she does so very little (on hand for basically one scene where she’ll become useful), and the latter is one of the most annoying, eminently punchable characters in cinematic history. Every moment spent in Fraklin’s jittery, flop sweat drenched, unimaginative, hypochondriac presence feels like a soul sucking eternity. He’s meant as comedic relief, but he really represents the death of comedy in its purest form, and Smith isn’t seasoned enough to play such a thinly drawn caricature beyond flailing around like he’s trying not to get thrown out of a Jerry Lewis impersonator convention for sucking. But credit where due, Smith makes more of an impression than the rest of them, as long as we count negative impressions as impressions.

But worst of all, the level of creative bankruptcy on display here makes for a thoroughly boring slog of a blockbuster. There wasn’t a single moment of Jurassic World: Fallen Kingdom where I wasn’t bemoaning the fact that I was pissing literally hours of my life away just from being there. I was never excited. My pulse never quickened. I was never entertained. I was watching images flash before my eyes, growing increasingly disheartened by this lacklustre and soulless turn in a franchise that I’ve genuinely enjoyed in the past. It’s too bad that this is reportedly the second part of a new trilogy because this franchise has reached the point where it should become extinct for good.

Oh, and before I go, I sincerely hope you don’t go to Jurassic World: Fallen Kingdom hoping that Jeff Goldblum’s returning Ian Malcolm does anything cool or exciting. You’re only getting a total of ninety seconds of screen time at the beginning and end where he sits behind a desk delivering a thunderously obvious speech, interacting with none of the franchise’s newer characters. That’s it. That’s all he does. I hope that I’ve at least saved those only going to this thing to see Goldblum fifteen bucks and parking fees. You’re welcome.

Check out the trailer for Jurassic World: Fallen Kingdom: