Uniquely pitched somewhere between the work of the gritty and perceptive outlandishness of the Coen Brothers and the surreal, dreamlike work of Thai auteur Apichatpong Weerasethakul, the modernist Indonesian western Marlina the Murderer in Four Acts is one of the most delicately plotted revenge films I’ve ever seen. Deliberately paced, thematically calculating, and unafraid of alienating the viewer for the sake of making a point, the latest film from Mouly Surya takes familiar genre clichés, slows them to the speed of molasses, and spins a story that’s about far more between the margins than vengeance and bloodlust.

Still reeling over the death of her husband and deeply in debt, young widow Marlina (Marsha Timothy) watches over the livestock on her rural Indonesian estate; with her husband’s well preserved body still taking up space in the living room. One day, a drifter (Egy Fedley) arrives at her doorstep demanding hospitality. She’s told by the tough talking man that six of his buddies are en route, and that they’ll soon rob her of her livestock and money, and that they’ll probably end up raping her.

Mouly (What They Don’t Talk About When They Talk About Love, Fiski.) plays these shocking and inciting events as calmly as possible. The visiting bandit never raises his voice, and Marlina remains mostly silent, preferring to take everything in before fighting back immediately. After the robbers arrive and Marlina has gotten revenge on all but two of her assailants, a sense of confusion befalls her; unsure if she should report her vengeance to local authorities (who are hilariously unreachable via phone in one of the film’s best darkly comedic gags). Wanting to report the crime, but sadly uncertain if she’ll be believed or not, Marlina takes up the severed head of one of her victims and makes her way to the police station in town.

Marlina the Murderer in Four Acts is built around material that could be perfect for a sleazy, sun drenched B-movie western, but Surya wants to create something far more elevated. Slow almost to a fault, Marlina the Murderer in Four Acts isn’t in a hurry to get anywhere, building discomfort not through shock value, but through patient manipulation of audience expectations. Yunus Pasolang’s resplendent cinematography captures the bleak, but not entirely inhospitable rural Indonesian landscape perfectly, and the musical score from Zeke Khaseli and Ydhi Arfani is reminiscent of classical Morricone spaghetti western scores, but comparisons to more visceral works stop there.

Outside of a two separate flourishes of blood violence, Surya’s film is more focused on creating an atmosphere of surreal helplessness than vengeful grotesquerie. Marlina the Murderer in Four Acts is a feminine take on a usually resolutely male genre, and the result is a film that prefers reason over action. While previous female driven westerns might have injected their leading characters with a certain amount of machismo that makes them equal to their male counterparts, Surya and her co-writers, Rama Adi and Garin Nugroho, do no such thing. While the heroine of her tale is a sympathetic sort of killer, the film’s crushing, deliberate tone and pace are built from the insecurity of not having her story believed and a sense of guilt that she would even have to resort to such lengths in the first place. 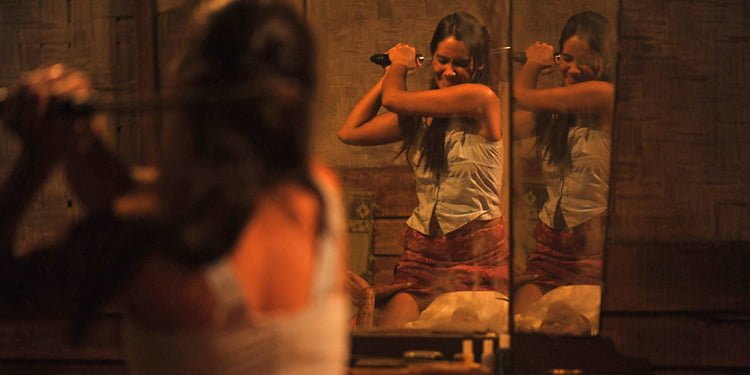 A subplot (which eventually takes over the film by the final act) involving Marlina’s unlikely travelling companion, a chatty and extremely pregnant neighbour (Dee Panendra), further underlines themes of feminine change and evolution, literally refocusing the film’s perspective to that of another form of protection and power: motherhood. Surya isn’t nearly as interested in bloodlust or revenge as she is talking about gender politics through one of the most resolutely male dramas out there. With the exception of the afore alluded to beheading and a brutal beating of a woman by a callous, uncaring husband later on, the violence is relatively restrained, and interactions between Marlina and the robbers are pitched as eerily threatening dialogues instead of forceful, in-your-face confrontations. Surya never allows the genre to dictate the direction of the material, and considering that westerns haven’t been often reinvented on a plotting level since the John Ford era, the switch in perspective becomes both welcome and quietly revolutionary.

But I’m still not entirely convinced the languid pace of Marlina the Murderer in Four Acts is necessary or befitting. It’s one thing to watch people in a room quietly judging each other for long periods of time, or to have Timothy repeatedly looking into the camera to silently confront the viewer and provoke them to thought, but it’s something else to watch Marlina eat her lunch or soak in the landscape as she rides the hilly terrain on horseback. The pacing of Marlina the Murderer in Four Acts has been designed to let the themes and surrealist touches of the material marinate in the mind of the viewer, but there still feels like there isn’t enough material to sustain a ninety minute running time. Sadly, some of the film’s more gorgeous moments (which are more than worthy of the previous comparison to Weerasethakul) come across as time padding filler and not moments of reflective contemplation or visual musings. Many scenes exist solely with the purpose of slowing things down further, suggesting that, even with Surya’s clear and pronounced four act structure, Marlina the Murderer in Four Acts would have worked better as a mid-length short.

That squabble seems relatively minor, however, and one that’s best left to individual viewers for decide. It also in no way detracts from what Surya has been able to accomplish with her latest film. It’s unique and feminine (though I would hesitate to outright call it feminist) and operating within a genre where both qualities are rarely celebrated or embraced. There aren’t any other films quite like Marlina the Murderer in Four Acts, and it’s always worth commending filmmakers standing firmly on their own ground.

Marlina the Murderer in Four Acts opens at TIFF Bell Lightbox in Toronto on Friday, June 29, 2018. It will be available everywhere on VOD and iTunes on Tuesday, July 17.

Check out the trailer for Marlina the Murderer in Four Acts: