The dumb-dumb, ho-hum, and moderately fun sci-fi action thriller Upgrade (which finally makes its way to Canadian screens after coming out in the U.S. almost a month ago) could stand to be either 50% crazier or 50% smarter. It gets points for brazen stupidity and a wealth of style, but writer-director Leigh Whannell’s mish-mashing of dozens of better movies into a low budget B-movie package needs either more gusto or more intelligence to fully coalesce into something great. I wouldn’t particularly care if things got amped up or brainer, but one or the other would certainly spice up this otherwise bland, but not entirely ineffective broth.

Logan Marshall-Green (who looks like the poor man’s Tom Hardy and sounds like the poor man’s Jeffery Donovan) stars as the ludicrously named Grey Trace, a lowly auto mechanic who loves working on his beloved muscle cars, in a future where everything is either on autopilot, comes with an A.I. component, or otherwise has an interactive screen. One night after dropping off a freshly remodeled Pontiac Firebird to a social awkward, Howard Hughes-ian computer sector magnate (Harrison Gilbertson), a group of ex-military hitmen target Grey and his wife (Melanie Vallejo) for seemingly no reason, leaving her dead and paralyzing him from the neck down. The mysterious computer scientist (who has a literal “cloud” following him around) makes a proposition that Grey reluctantly accepts. Grey has a super-powered microprocessor fused to his spinal column that should aid and enhance his way of life. Almost immediately he’s able to walk again, quickly throwing himself into the search for his wife’s killers. But the chip, known as Stem (voiced by Simon Maiden) helps more than Grey’s motor functions, and is able to openly communicate with its human host. If Grey lets Stem take the wheel of his body for a bit, the former mechanic can turn into an unstoppable, cunning badass, which certainly helps in the hunt for the murderers, but also draws a lot of unwanted attention from the villains, the police, and the chip’s skittish creator.

Australian Whannell is probably best known as a character actor and the co-creator of the Saw and Insidious franchises alongside James Wan (who gets an amusing nod here), and Upgrade marks his second outing in the director chair. It’s a far more assured and confident effort than the work he put in on Insidious: Chapter 3, and it certainly looks like a more fun sandbox to play in. Stylistically, Whannell throws everything he can at the screen, working with some of the most impressive lighting set-ups this side of a John Wick film and aided nicely by Stefan Duscio’s exceptionally fluid cinematography and some great editing from Andy Canny. The effects are impressive given the film’s small budget, and the herky-jerky fight scenes that ensue when Stem takes over to lay waste to a pitiable fool are even better. If one were to turn the sound off, a lot of fun could be had from watching Upgrade.

Unfortunately, the rest of Upgrade doesn’t fare as well, and Whannell’s lax screenplay is mostly to blame. Grey’s quest for answers is cobbled together out of bits and pieces of other revenge and technophobic thrillers. RoboCop, The Terminator, Body Parts, Blade Runner, Monkey Shines, The Lawnmower Man, Universal Soldier, The Matrix, etc., etc. If there was ever a film where someone has been enhanced or somehow possessed through the use of modern technology and medicine, Whannell will happily ape its contributions to cinema wholesale, whether the film being riffed on was any good or not. 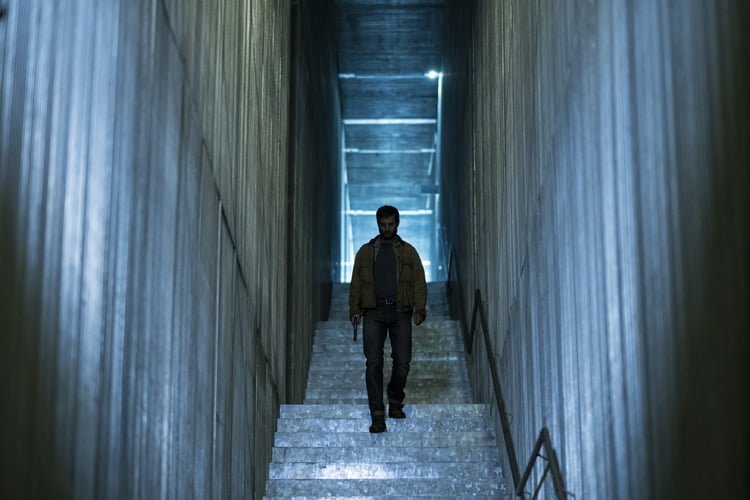 To be fair to Whannell, it’s a perfectly understandable and reasonable B-movie technique designed to entertain across 95 minutes rather than to make audiences think or become provoked to lasting emotions, but without stronger directorial sensibilities or smarts, Upgrade’s piecemeal approach underwhelms. It’s the kind of film that invites dozens upon dozens of logical and logistical questions for any of this to make a lick of sense, and clearly Whannell doesn’t want anyone asking them or he wouldn’t have made something this incredibly stupid, building to a twist that couldn’t be more blindingly obvious if you were standing on the goddamned sun. These kinds of films will rarely ever be seen as high art, but they could be fun if carried out with a lot of enthusiasm or energy.

This is where the film’s low budget trappings and Whannell’s mediocre level of creativity hobble Upgrade’s chances of becoming a bonafide camp classic. While everything is competently mounted and creatively shot (especially a cartwheeling camera angle during one of the early fight sequences), everything feels static and contained. The plot moves from scene to scene in a pedestrian, safe manner as Grey’s quest amplifies. Upgrade never once feels like a film where anything can happen at any moment. There’s no anarchic spirit that can overcome the storytelling flaws. The viewer knows every step of the way exactly where Whannell is heading, and nothing surprises. It looks fine. It moves fine. But that’s all it is: fine.

Green and his fellow cast members do what they can to add a bit more energy by trying to out-chew the scenery amongst each other, and while that élan is certainly welcome, it doesn’t keep Upgrade from initially leaving a lot of questions in the mind of the viewer as soon as it ends. The problem here is that none of those questions are particularly fun to answer, and they’ll fade from the memory very quickly. Upgrade is the kind of film that should feel sharp and overwhelming. Instead, it’s just a competent, workman-like product that’s too silly to hate and too dumb to remember.

Check out the trailer for Upgrade: