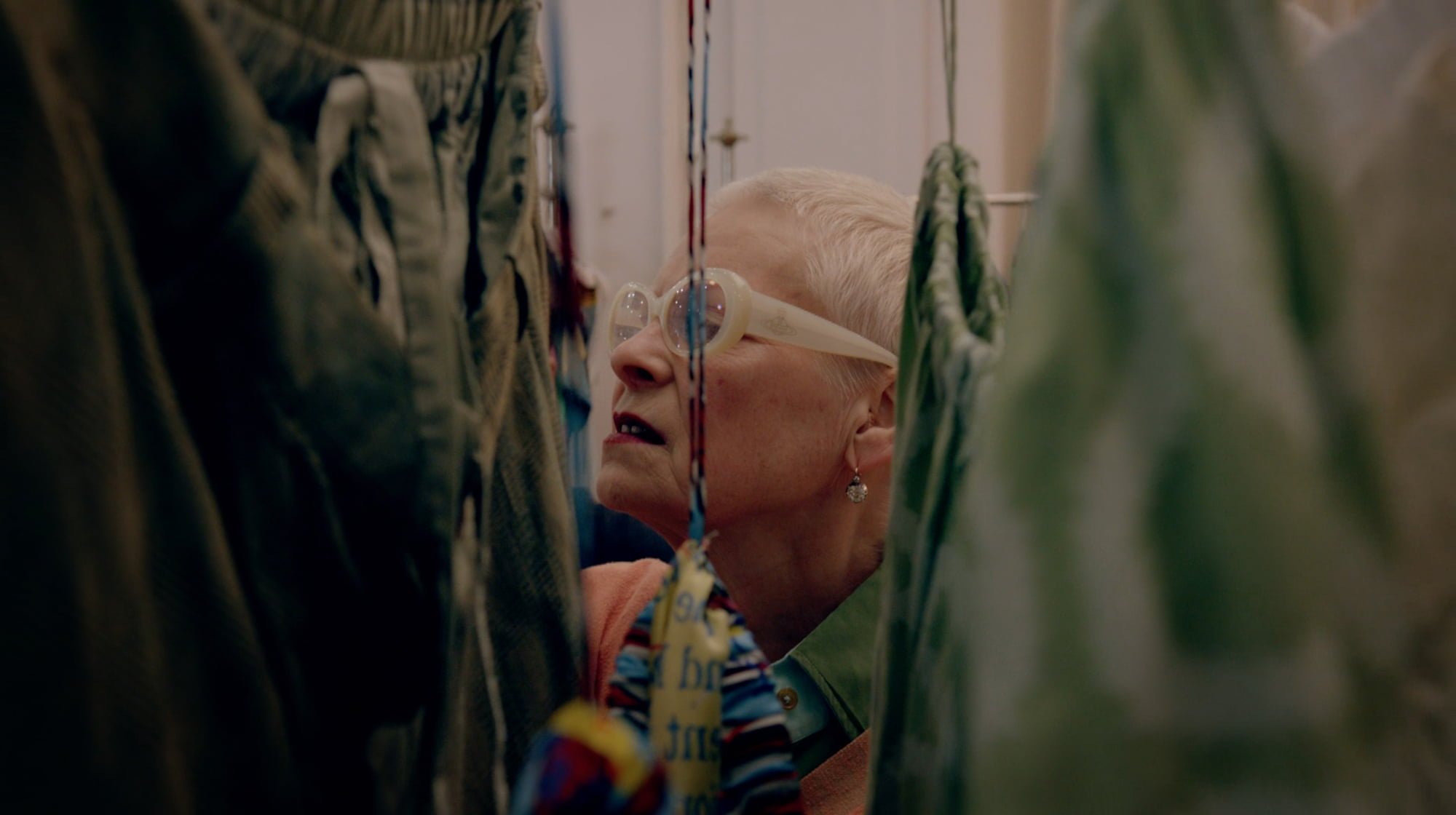 Unfocused, alternately fawning and insulting, and not getting any help from an obstinate, stand-offish central subject, the documentary Westwood: Punk, Icon, Activist is a thoroughly underwhelming and unnecessary looks at a fashion world figurehead. Of the three signifiers that come after Dame Vivienne Westwood’s name in the title of Lorna Tucker’s documentary, none of them are adequately explained or put into any sort of context. It’s a film that exists solely because the filmmaker thinks that this person is great, and the subject has just enough ego left to let someone follow them around.

An iconic name in British fashion, Vivienne Westwood rose to prominence around the same time punk rock was tearing up the U.K. After getting married and divorced at a young age, Westwood partnered financially and romantically with former Sex Pistols manager (and film producer) Malcolm McLaren. The pair would filter the anarchic nature of punk rock through their clothes, and become the bedrock that Westwood would build upon long after her partnership with McLaren dissolved.

With that above paragraph, I’ve said basically everything that Tucker has to say about Westwood’s “punk” leanings. Although Westwood: Punk, Icon, Activist has plenty of interview access to Vivienne and her inner circle, every time she’s asked about arguably the most interesting time in her life, the designer bristles and moans that she’s bored by discussing it anymore. Considering that she’s allowing Tucker into her personal and professional life, one can be forgiven for thinking that Westwood would be slightly more forthcoming. Tantalizingly, Westwood says that every garment she ever created tells a certain narrative. She doesn’t want to share any of them with us, mind. The viewer just has to take her every word as gospel. A fashion historian pops up on two occasions throughout Tucker’s film to talk about some specifically iconic garments, and the insight is so nuanced and fruitful, that one wishes the film were about her and not Westwood.

Every interview with Dame Westwood sounds like she’d rather be working or at home. She acts either purposefully evasive or ignorant when asked if she could remember the moment when her company became successful. She seems embarrassed by her status as a one-time counter-cultural icon. She could have declined appearing in film (and if anyone is in the position to say no to a filmmaker, it’s her), but I think the not-so-secretly media courting and marketing savvy Westwood wanted to bring her activist leanings into a sharper light.

That portion of the film’s title doesn’t fare much better. Those wanting to learn more about her philanthropic streak and advocacy on climate change issues will be waiting until nearly the end of Westwood: Punk, Icon, Activist, and by the time Tucker’s film shambles to its conclusion, all Westwood has to say on the subject is that she read a single magazine news article and she was shaken by it. That’s it. That’s all you’re getting. One flippant response tossed off by someone with an elephantine ego that suggests she had just found the Holy Grail. If her reticence to speak about her past in the documentary’s early moments was glib, her ham-fisted and, frankly, corny activism comes across as phony without any sort of necessary context, especially since she previously showed no interest in the subject until approximately seven or eight years before this film was made. As one of Tucker’s talking heads points out somewhat backhandedly: “The most sustainable thing she could do would be to close the factory.” And considering how disinterested Westwood seems by her own success, it’s hard to swallow Tucker’s limp response, which says Vivienne doesn’t do something that drastic (and ACTUALLY punk) because there are people still making money off her name. 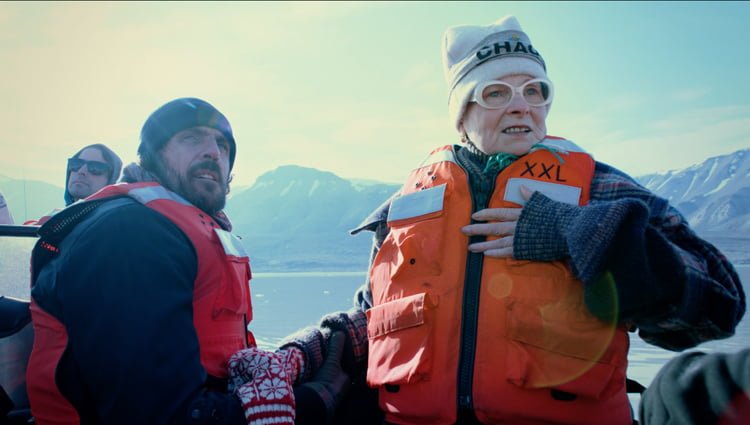 Westwood: Punk, Icon, Activist does spend a lot of energy on the “icon” part of the equation. Westwood constantly espouses her admittedly stellar work ethic and her desire to never showcase something she feels less than 100% certain about. There’s definitely something praiseworthy to be said about her uncompromising, plain spoken, frequently vulgar demeanor that’s endearing in small doses. It’s also interesting to note how press treats her differently at home and abroad, especially within archival footage of a British talk show aimed at octogenarians that finds the designer practically giggled off the stage by the studio audience. That one moment builds more sympathy for Westwood than the entire rest of the documentary, but it also best showcases the strength that it takes to become an icon. She takes her setbacks in stride and is able to identify fools from a distance. She has succeeded without corporate sponsors in a notoriously simpatico industry that thrives on external collaboration. That deserves a lot of respect, but it only amounts to tidbits that will pique the interest of those wanting to learn more about the business side of the fashion industry, not the actual clothes, people, or history behind it.

Westwood’s subtle imposing of will over Tucker’s film certainly isn’t endearing, or even all that interesting or dramatic. Although Tucker spends plenty of time with Vivienne and her current 50/50 business partner and husband Andreas Kronthaler, most of the time spent with them is mundane and fawning. There’s hardly anything critical or interesting said by Westwood, Kronthaler (who comes across rather poorly in his own interviews), and any of the film’s other interview subjects, and Tucker never goes the extra mile to circumvent her subject’s frustratingly narrow world view. If the opening moments about punk are underdeveloped thanks to Westwood’s reticence, and the activism bits are tacked on to appease Tucker’s subject, the remainder of Westwood: Punk, Icon, Activist is a pointless bore that doesn’t improve in any way over reading a book or article written about the film’s central figure.

Curiously, the film’s final moments tip ever dangerously into mocking Tucker’s subject. While Vivienne and Andreas look over their latest collection and critique every minor detail, the filmmaker makes sure to capture every eye roll and mocking glance that occurs behind their backs. I’m not sure why this was included in Westwood: Punk, Icon, Activist, especially so late in the film, and I can imagine it would potentially upset Tucker’s subject. Then again, they probably don’t care. They clearly don’t care about their own movie, and they’re content with their success, so why should they care that their staff clearly hates their guts behind their back? If they don’t care about being in a documentary and engaging with a public that might genuinely be interested in them, why should you care about seeing Westwood: Punk, Icon, Activist in the first place?

Check out the trailer for Westwood: Punk, Icon, Activist: