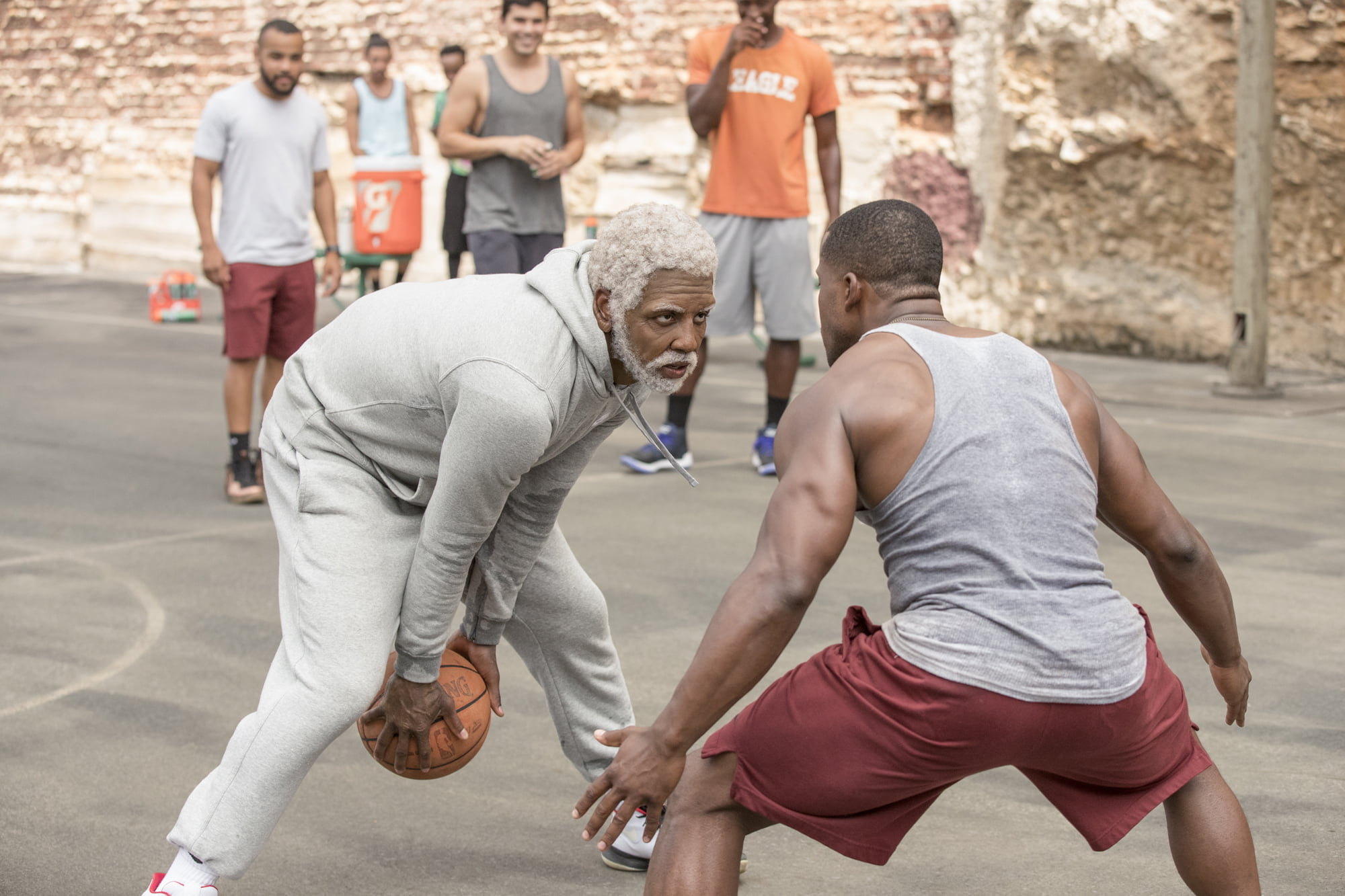 The basketball comedy Uncle Drew will never be regarded as one of 2018’s unequivocal cinematic masterpieces, but it’s the best case scenario for a high concept comedy predominantly starring non-actors that’s been spun off from a commercial already several years past its cultural expiration date. On paper, this Pepsi sponsored cash grab should be patently terrible, cynical, and soulless. In execution, it’s a reasonably enjoyable, lightweight romp about loving the game of basketball and cherishing friends and family. It’s nice, a little corny, and there’s some hearty laughs peppered throughout, which is more than I expected to get. It ain’t Ozu or Kubrick, but Uncle Drew exceeds its rock bottom expectations.

Dax (Lil Rey Howery) has dreamed of winning the Rucker Classic, a prestigious streetball tournament in Harlem, ever since he was a little, orphaned boy. He’s finally on the verge of putting together an unbeatable B-ball squad for the event’s fiftieth anniversary, when his entire team is stolen away by the sleazy and arrogant Mookie (Nick Kroll), a seven time tournament champion with deep pockets and not a shred of humility. Without a team and abandoned by his materialistic girlfriend (Tiffany Haddish), Dax begins search for a new teammates. One day, Dax catches a glimpse of the mythical Uncle Drew (NBA superstar Kyrie Irving), an elderly man with preternatural basketball skills. Uncle Drew, a veteran of the first ever Rucker, agrees to create a team, but it has to be made up of the friends he once intended to take tournament finals before personal squabbles ruined things for everyone. Dax wonders if Uncle Drew’s crew – which includes a preacher (Chris Webber), a begrudging kung-fu instructor (Shaquille O’Neal), a legally blind shooter (Reggie Miller), and a mute in a wheelchair (Nate Robinson) – can live through the first game, let alone bring home a championship, but the team’s star player constantly reminds the coach that the Rucker is about the love of the game, not the glory that comes from it.

Uncle Drew is made up predominantly of in-jokes for basketball fans, the humorous incongruity of seeing middle aged basketball players under pounds of admittedly convincing make-up, stock dramatic conflicts, and gags involving old people. If none of those aspects seem funny or interesting to you, you’re not the audience for the latest film by director Charles Stone III (Drumline, Paid in Full). The script from Jay Longino (Skiptrace) keeps everything light, snappy, and simple; adhering to any sports movie cliché he can get his hands on. It’s not surprising that a film based on a 2012 Pepsi MAX commercial wouldn’t be all that original, but it is surprising that this thing works at all.

Howery, who made the most of his character’s limited screen time in Get Out, proves to be a likable leading man; like a less spastic Kevin Hart. The character is written as a likable chump who’s been kicked around for far too long, but within that framework, Howery finds more subtle levels of anguish and humour. Most characters pitched at this level are annoying neurotics with selfish, spiteful goals. Although Uncle Drew constantly refers to Dax as a hustler, Howery portrays the character as a broken man with a dream who’s completely on the level. It’s a nice change of pace to watch a film like this built around a genuine, good person who needs a self-esteem boost instead of one built around a terrible human being learning to be better. He also provides a much needed counterpoint to Kroll and Haddish’s stratospherically over-the-top goofball villains (and that’s not a knock against Kroll and Haddish’s work, which is pretty darn funny). 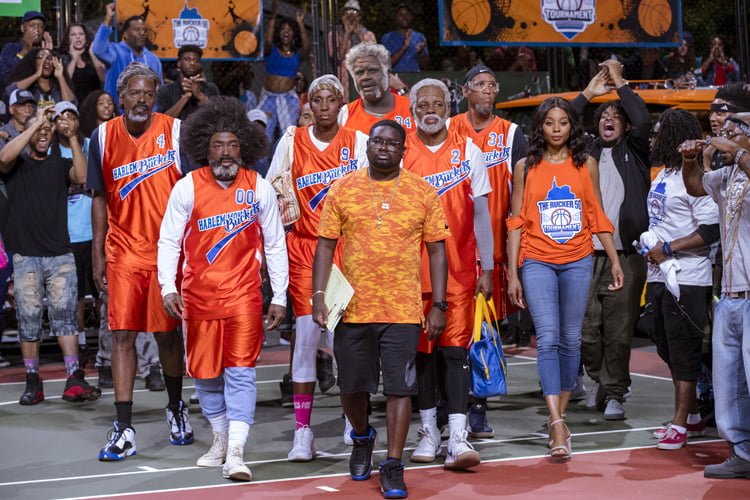 But the main attraction here won’t be Howery, despite his position as a leading man. Most of the people who see Uncle Drew will be coming for the cavalcade of basketball stars that are either playing major roles or popping up in unlikely cameos. Irving doesn’t have the acting chops the more established talents possess here, but his comedic timing is impeccable, and he’s able to make Uncle Drew into a warm and charming figure. Miller gets some good mileage out of a stereotypical, but less offensive Mr. Magoo character. Robinson doesn’t have much to do except keep his massive hair from tipping over his character’s wheelchair. And surprisingly, despite having the most acting experience out of the bunch, Shaquille O’Neal has somehow gotten worse and less charismatic as a performer. It’s not often that the most “seasoned” performer of the bunch emerges as the weakest link, but that’s precisely what happens in Uncle Drew.

But the true standout here is Webber, who has recently been dabbling in Hollywood as an actor and an indie film producer. Throwing caution to the wind and ego alongside it, Webber’s performance is manic comedic perfection, earning more laughs from his supporting role than everyone else gets combined. It helps that he’s paired with the equally surprising performance given by female basketball legend Lisa Leslie. Their dynamic as a bickering husband and wife is good enough to sustain its own film, and I would watch it in a heartbeat.

Most endearingly, Uncle Drew is a corporately run comedy that doesn’t treat the audience like idiots. It knows that most viewers will recognize the main character from television commercials, and Stone’s film never distances itself from that potentially dodgy point of view, in fact doubling down on promotional consideration for any number of other products and brands. It never leans into it too greatly, either. There are plenty of self-effacing pot shots taken at the film’s commercial roots, including a tossed off shout out to Aleve from Kroll’s character that’s one of the most genuinely funny and incongruous movie moments of the year.

Being self-aware of corporate influence is good for brands, but it doesn’t make a movie based mostly around product placement any better. Uncle Drew gets its recommendation mostly by being better and funnier than it needs to be. This sort of film could have been crapped out by just about anyone and it still would have made its money back in endorsements before making its way to cinemas. The fact that anyone involved thought to actually make a decent movie from it isn’t worth cheering from the bleachers, but it’s worth smiling about.

Check out the trailer for Uncle Drew: