Review: Ant-Man and the Wasp

Charming, lightweight, suitably entertaining, and a slight improvement over its charming, lightweight, and suitably entertaining predecessor, Ant-Man and the Wasp doesn’t represent the A-list of the Marvel Cinematic Universe, but after the bombastic, candy coated tragedy of Avengers: Infinity War, it strikes as a welcome respite. It’s cheerful and forgettable, directed and conceived with a basic level of ingenuity and pizzazz, and boasting the hallmarks of a dutiful assembly line piece of product. If it weren’t for the cast and an overall feeling of good will, it would be dreadfully mediocre. Ant-Man and the Wasp won’t be anyone’s favourite Marvel movie, but those looking for a passable way to spend two hours in some cranked up air conditioning with an enormous drink and a tub of popcorn could do far worse for their money.

Set roughly several weeks before the events of Infinity War (which is why no one brings it up), Ant-Man and the Wasp starts with Scott Lang (Paul Rudd) serving out the last remaining days of a house arrest sentence following his alliance with Captain America against his fellow Avengers brethren in Germany. Scott is eager to spend time with his daughter (Abby Ryder Fortson) outside the confines of his home, and to start up his first legitimate business: a security consulting firm co-owned by his doofy best buddy, Luis (Michael Peña). But just as he’s nearing the end of his time served, Scott begins to dream about his estranged mentor Hank Pym’s wife, Janet (Michelle Pfeiffer), who was long thought lost in the subatomic “quantum realm,” a place that Scott successfully returned from after it was long thought to be impossible. Scott reaches out to Hank (Michael Douglas) and his daughter, Hope (Evangeline Lilly), to tell them. Although Hank and Hope are understandably still angry with Scott for using their shrinking and enlarging technology so brazenly and openly during the events of Captain America: Civil War, they bring him reluctantly back into the fold, believing that he holds the key to rescuing Janet in his mind.

The plot of Ant-Man and the Wasp sounds simple enough on its own, but there’s no classic Marvel villainy in telling the story of a straight-up rescue mission, so returning director Peyton Reed and his team of five screenwriters (including Rudd) have to come up with a MacGuffin that’s integral to the storyline to give everyone something to chase. That mythical object is Hank’s entire lab, which can be shrunk to the size of an easily portable suitcase. The tech within the lab is coveted by Ava (Hannah John-Kamen), a.k.a. Ghost, a covert government assassin who can’t control her ability to become invisible and is in danger of disappearing from this earth forever. It’s also desired by Sonny Burch (Walton Goggins), a black market tech dealer who simply wants Hank’s creations to make a profit. One of the villains is sympathetic and needs the MacGuffin to survive. The other villain wants it just because he’s a greedy jerk. At any rate, Scott and Hope have to suit up as their heroic alter-egos to put a stop to their duelling plans and rescue Janet from the netherworld.

It’s a fine enough framework to contain a bunch of comedic set pieces and action sequences where a MacGuffin is bounced around like a hot potato, but nothing surprising or exceptional. There are some mild rug pulls and swerves along the way, but Ant-Man and the Wasp won’t earn points for subverting audience expectations. Reed’s film does exactly what it says on the tin. Ant-Man and the Wasp will team up, fight some crime, and the door will be left open for any number of further movies in the elephantine franchise that it has spun off from. If audiences didn’t fully know what they would get from Black Panther or Avengers: Infinity War, Ant-Man and the Wasp will feel like an adequate return to safe, non-confrontational ground. And while I vastly prefer Ant-Man and the Wasp’s unforced, unfettered optimism and cheerfulness to Infinity War’s overblown and narratively suspect gloom and doom, there’s nothing Reed and company can do to make this feel like more than a pleasing diversion. 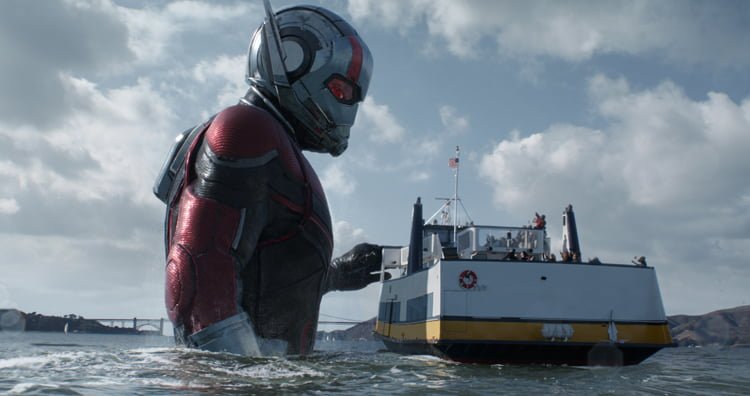 The problem really begins and ends with Reed (Bring It On, Yes Man), the weakest filmmaker to be granted a coveted franchise in the MCU. He’s not much of a stylist, and he’s sometimes uneasy around action heavy set pieces, but he knows his way around a gag, and he has an okay visual eye. None of Ant-Man and the Wasp dazzles, save for the film’s bonkers final act, which begins with an exceptional car chase before spinning off into several concurrent action sequences. Even then, there’s pronounced predictability to Reed’s journeyman approach. The editing and scene transitions are jumpy, but whenever Reed stays in a single location, he’s able to spin the script’s sometimes unnecessarily jumbled plotting into a charming B-movie on a megablockbuster budget. There’s nothing wrong with the approach, but those who like something more than a mediocre summer blockbuster will leave wanting a lot more than this.

Much like the first film (which ditched its vastly more talented intended helmer during pre-production), Ant-Man and the Wasp gets by largely on snappiness and wit. It’s not nearly as funny as a Guardians of the Galaxy film or Thor: Ragnarok, but it’s fine on its own terms. Few people possess the “aw shucks” charm and comedic timing that Rudd displays, often making throwaway moments into the most memorable segments of a film. Douglas and Lilly are a likable tandem worth rooting for, and if nothing else, Ant-Man and the Wasp gives both of them a lot more emotional material to work with. Peña once again steals every scene he’s in, getting the lion’s share of belly laughs, but he’s nearly matched by Randall Park, playing the perpetually confused and suspicious FBI agent assigned to keep tabs on Scott. There’s also some nice work here from Laurence Fishburne as a conflicted former partner of Hank’s that the team turn to for help and advice. Everyone cast in the film is great, and they’re worth watching even if the story’s energy begins to flag under the weight of too many moving parts.

As in many Marvel films, the villains are hit and miss. Neither of them are credible threats, but the idea of pitting a good baddie against a bad baddie helps to hide the shortcomings of the characters. There’s a distinct sense that Kamen’s Ghost will return in future franchise installments, and the viewer is given only enough information to understand her backstory, while being teased into wanting more from future appearances. Goggins, on the other hand, is his usually oily, charismatic self, but like his past couple of on screen appearances (Tomb Raider, The Maze Runner: The Death Cure), he seems to only be on hand for reaction shots and smugly delivered punchlines. He can be used far better than this, and roles like this might be doing his wallet a service, but not adding much to the substance of his career.

Those already annoyed by Marvel’s homogenized, interconnected approach to blockbuster filmmaker will become positively apoplectic over Ant-Man and the Wasp. While they wouldn’t be wrong that these films are feeling long in the tooth and interchangeable, it also feels like getting worked up over a whole lot o’ nuthin’. Ant-Man and the Wasp is disposable entertainment if ever such a thing existed, but sometimes it can hit a sweet spot. It’s like going to a barbecue on a sweltering summer day, and all that’s available are plain cheeseburgers, vanilla ice cream, and light beer in a beat up cooler. It’s comforting and quaint in the moment, but not particularly memorable. It’s just another summer day. Sometimes that’s fine enough on its own.

Ant-Man and the Wasp opens in theatres everywhere on Friday, July 6, 2018.

Check out the trailer for Ant-Man and the Wasp: