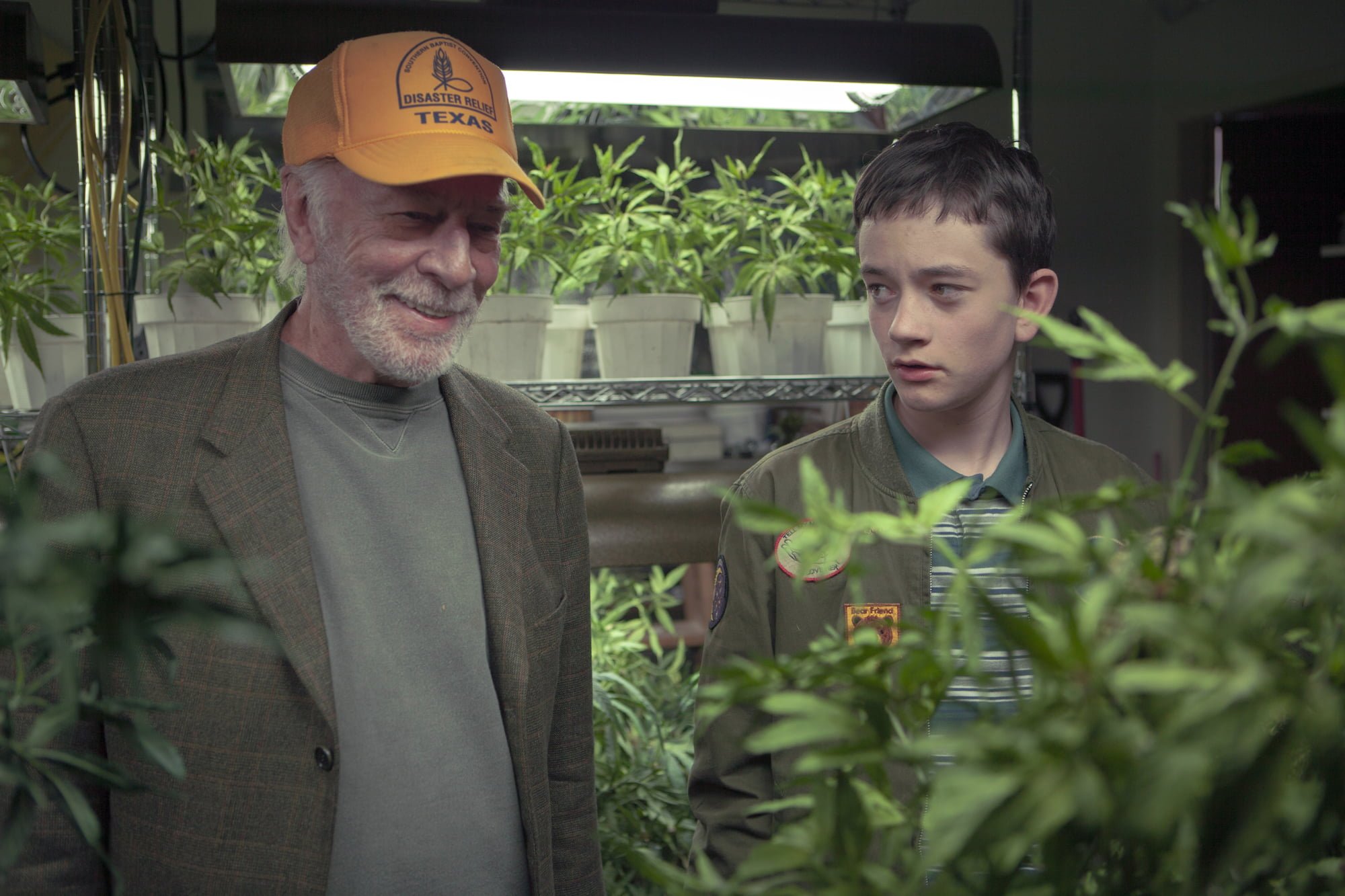 Writer-director Shana Feste’s Boundaries is the kind of quirky indie movie that would be fine only if you left the second the plot kicks in. It wouldn’t be anything special, but you’d have a serviceable story of a divorced mother trying to deal with her increasingly problematic pre-teen son and their relationship to a ne’er-do-well grandfather figure. It would be a humane and slightly amusing slice of life story. Once the film’s high concept hook comes in, however, Boundaries becomes insufferably twee, unbearably idiotic, and capable of taking place nowhere in this or any other known universe. It becomes so staggeringly awful that it’s like watching something innocuous and inoffensive suddenly exploding before one’s eyes.

The aforementioned mother is Laura, played by Vera Farmiga, a loving, kindly divorcee who rescues any animal that appears to be in need or distress. She’s been ducking repeated phone calls from her estranged, ex-con father, Jack (Christopher Plummer); her focus instead on trying to raise over $200,000 to send her sensitive son, Henry (Lewis MacDougall), to a private school. Eventually she picks up one of gramps’ calls to find out that he’s being kicked out of his retirement community for carrying out illegal activities on the premises. Laura has no space at home or desire in her heart to help out her father, so she concocts a plan to pawn him off on her sister (Kristen Schaal) out in Los Angeles. If he can’t stay with Laura, Jack insists on a road trip, agreeing to help fund Henry’s private school in exchange. What Laura doesn’t know is that the road trip is a ploy to quietly and discreetly sell of the remainder of Jack’s bumper marijuana crop along the way, enlisting Henry’s help, and keeping his mother in the dark as long as possible.

Farmiga, Plummer, and MacDougall are all capable performers who exhibit a good amount of dramatic and comedic chemistry with one another, but once Boundaries hits the road about thirty minutes in, all good will screeches to a deafening halt, like a truck full of operational record players suddenly driving off a highway and into a ditch. Feste (Country Strong, the Endless Love remake) says she based some of Boundaries on interactions with her own criminally shady grandfather, but I refuse to believe that their relationship was even a tenth as contrived, convenient, and annoying as the film spawned from those memories. The real story has to be more emotionally charged than Boundaries; a film that mistakes quirk for sincerity at every wrong turn.

In order for Boundaries to work, Laura has to be portrayed as a barely functioning, scatterbrained imbecile at the end of her rope. Farmiga isn’t the type of performer one normally turns to when casting for a frantic or desperate person, but she does what she can with something this horrifically written. Clearly siding more with the roguish charms of Jack and the boyish innocence of Henry than a pushover like Laura, Boundaries becomes a film that holds its supposedly more sympathetic leading character in utter, oblivious contempt. Playing Laura’s suffering for cheap laughs (especially a subplot involving her day job as a personal assistant for a horrifically demanding client and her demon child daughter) makes everything around these characters feel uneasy and depressing, not breezy and uplifting. 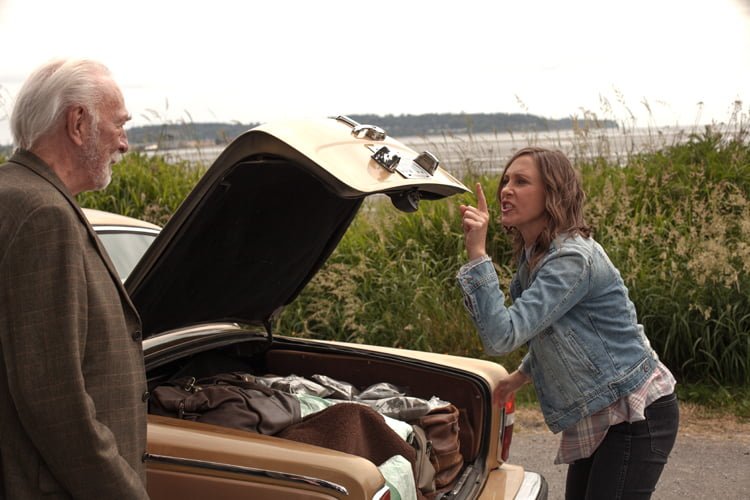 The title of the film explicitly refers to Laura’s need to establish boundaries, something that flies out the window once the road trip begins. She’s too stupid to notice that Jack has been selling pounds of weed out of the back of her car – a narrative gambit that’s low stakes considering that pot is decriminalized mostly everywhere – and never putting up a fight when they make unscheduled stops to visit grandpa’s art forging buddy (Christopher Lloyd), a washed-up pothead actor (Peter Fonda, giving zero fucks), or her ex-husband (Bobby Cannavale), who she inexplicably sleeps with in a further bid to undercut the character’s strength. She goes along willingly, learns nothing except that she needs to quit her job, and is basically the same broken and broke person that she was when the film started. Boundaries is a road picture with no emotional journey whatsoever.

It’s immediately obvious that Henry will be drawn to his grandfather’s charms and that Laura will eventually accept her dad, flaws and all. Any narrative wrinkles that arise are strictly in service of creating dire set pieces (especially a dreadful, never-ending bit where Laura angrily scatters the product in her trunk across a rural road that should end with a “womp-womp” sound effect to underline how hackneyed it is), and any emotional epiphanies are ones that are established in the film’s opening moments. Boundaries builds to nothing, dragging the audience along with three bland characters who are overthinking their easily resolved problems.

While Farmiga is out of her element, MacDougall and Plummer are left to their own devices and given even less to work with. MacDougall plays precocious, curious, and sensitive well enough, but Henry’s a dull kid to follow around. Plummer just has to act cool and suave, muttering the phrase “you little shit” so many times one could set a clock to it. The actors play well off each other, but whatever they saw in this material and in each other’s collaboration isn’t manifesting on screen at all. The only member of the cast that perks things up slightly is Schaal, whose unparalleled skill at turning the most ridiculous lines of dialogue into something funny suggests she would have been a better leading lady than the usually reliable Farmiga. Unfortunately, Schaal is only in about five minutes of the film.

About the only thing that Feste gets right here is that she has scouted appropriately picturesque locations to use as a backdrop for one of the least exciting familial road trips in cinematic history. Considering most of Feste’s scenes go on long after the flop sweat on her actor’s brows has dried, at least Boundaries gives the audience something nice to look at within the margins. It’s a fine distraction from everything else that’s happening on screen.

Boundaries opens in Vancouver and at Varsity Cinemas in Toronto on Friday, July 6, 2018. It expands to Montreal on July 13 and to additional Canadian cities throughout the summer.

Check out the trailer for Boundaries: