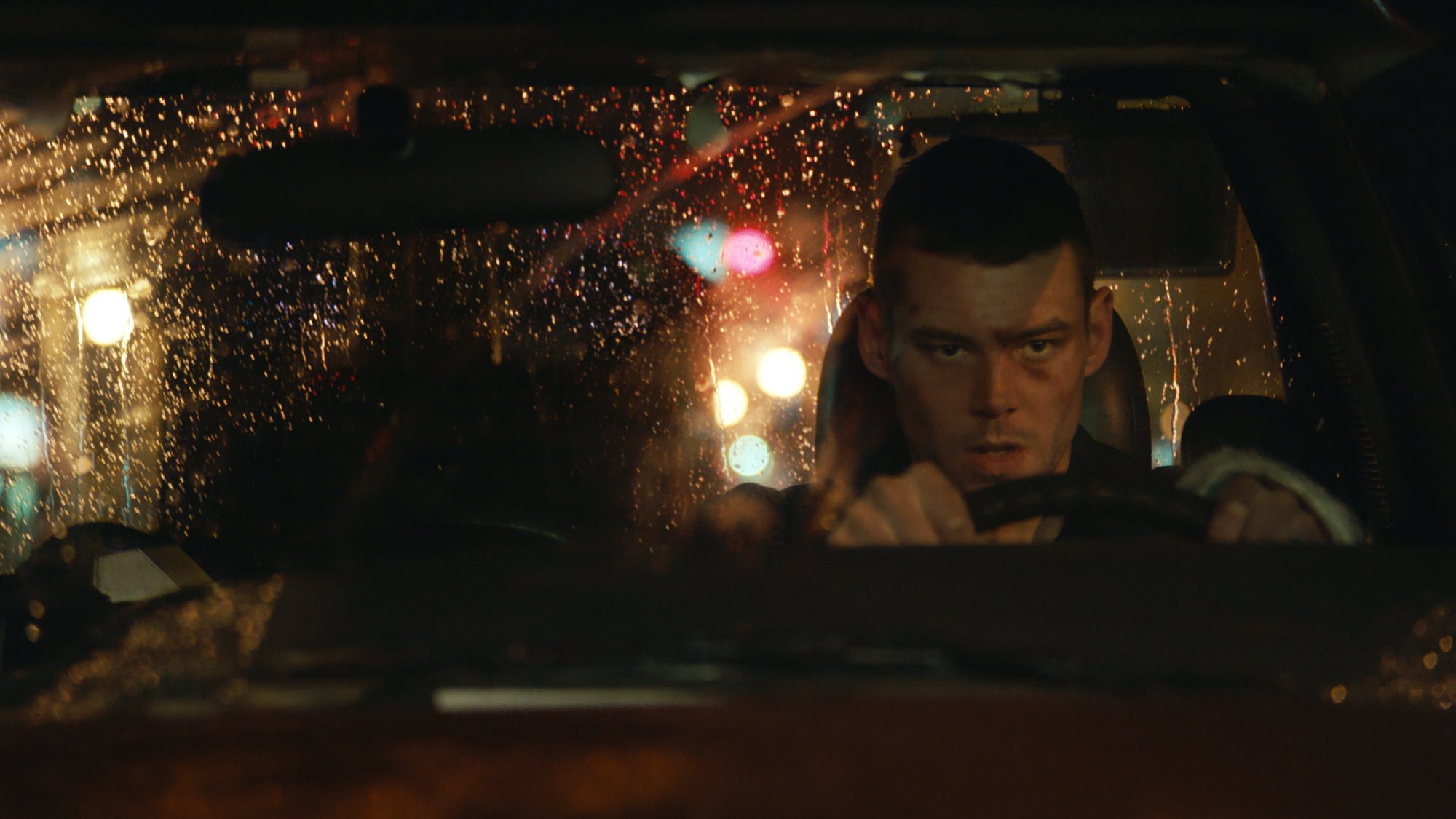 Intense and emotionally jarring, the Canadian thriller 22 Chaser mines an unlikely premise for maximum impact. Set in the highly competitive world of tow truck drivers hustling to make a living, first time feature director Rafal Sokolowski and veteran television writer Jeremy Boxen have created an economically minded parable that would slot nicely alongside recent works by Steven Soderbergh and Dan Gilroy. It’s riveting from start to finish and one of the best Canadian debut features of the year. If you think a film about a tow truck driver struggling to make ends meet and provide for their family sounds like a weak idea for a thriller or a domestic drama, reassess those thoughts immediately.

Ben (Brian J. Smith) rides the streets of Toronto in his tow truck, looking for bylaw infractions in area parking lots. In the towing world, he’s at the bottom of the pecking order. At the top are “chasers,” towers who show up en masse at the accident scenes and beg sometimes suffering people to let them take away their broken and beat up cars. They often receive hefty, off-the-books kickbacks from body shops, garages, and dealerships in exchange for their work. Ben, an honest man, refuses to engage in such predatory behaviour.

Everything changes for Ben due to a variety of stressors. Ben’s family is almost too poor to sustain themselves, and supplemental help from food banks won’t cut it for much longer. His supportive wife, Avery (Kaniehtiio Horn), is starting to see her dreams of going back to culinary school and opening her own restaurant fade away. His son (Jack Fulton) has been bullied and getting into fights at school for looking poor; desperately wanting a new, but relatively expensive bicycle for his birthday. The towing company he works for is in the process of signing a major contract with the city police department, and Ben’s boss is now demanding that drivers pay for the privilege of working, asking for an immediate, hefty first and last month’s rental payment on their trucks. Desperate to keep making a living and seeing a potential pot of gold at the end of the rainbow, Ben gambles on his future opportunities and borrows five grand from a crooked cop-slash-loan shark (Aidan Devine). With time running out to pay back the loan, Ben is forced into abandoning his moral qualms and dives headlong into the world of “chasers” that he sought to avoid.

The most immediate point of comparison to 22 Chaser would be Dan Gilroy’s seedy, L.A. set thriller Nightcrawler. The “chasers” operate in an amoral headspace similar to that of Jake Gyllenhaal’s glory seeking, newshound sociopath in Gilroy’s film. The coda for these shady drivers is set out early and often: respect your routes, always check the plates, never stop to call 911 (even if you’re the one in trouble), and “the money’s on the road.” It’s a strict sounding, morally fluid sort of guidelines designed to wear down an honest man like Ben, who’s willing to break them only out of personal pride and exhausted options.

While Ben doesn’t start out like one of his shifty brethren, the tension in 22 Chaser comes from knowing that he’ll eventually have to sell off parts of his soul both to succeed and correct his currently chaotic situation. No one will want to see Ben stoop to horrible depths, but there’s a perverse fascination watching how low he’ll go. Visually, Sokolowski and cinematographer Cabot McNenly capture a similar vibe, nicely showcasing late night, halogen lit city streets where the air is clear, but morality has taken a nap somewhere in the shadows. 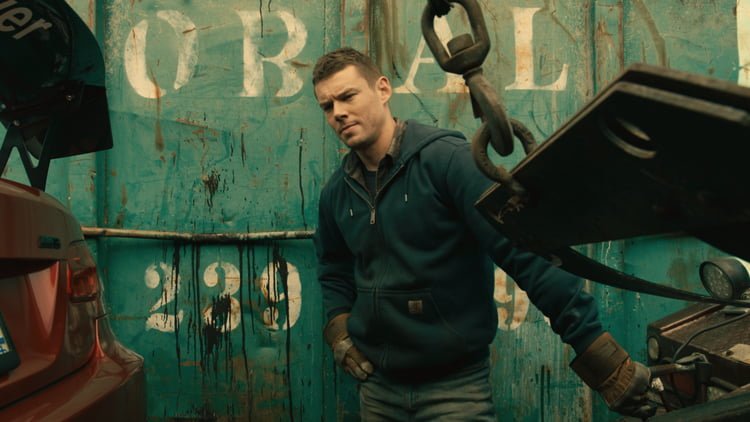 Such an economically minded storyline begs comparison to seemingly dissimilar Steven Soderbergh films like Magic Mike and Logan Lucky, which are tales of frustrated dreamers doing anything possible to stay afloat during times of financial crisis. While Boxen and Sokolowski’s material is considerably darker, a direct line comparison could be made between Ben and the protagonists of some of Soderbergh’s best recent works. By placing the emphasis of the story on Ben’s financial troubles and making the character sympathetic from the start, Boxen and Sokolowski ensure that audience investment remains high. Boxen’s scripts contain numerous scenes that rhyme nicely together, often following up one of Ben’s set-backs or darker decisions with a tender, cathartic scene that reminds the viewer why he’s going through all the trouble in the first place.

22 Chaser emerges as a unique morality tale with a wide range of appropriate cinematic influences, and a perfectly assembled cast of characters and actors acting as a rock solid anchor. Smith (who many might recognize from Sense 8) makes Ben more than just a sympathetic everyman. Wearing the character’s anguish on his face, while trying to stay cool when squaring off against the obvious antagonists in his life, Smith adds numerous layers of discomfort and unpredictability to a role that could have been a standard “good guy who does bad things” performance. Smith has perfect chemistry alongside Horn, whose character is given plenty to do outside of being a worried homemaker, thanks to the filmmakers reminding viewers that wives and mothers are human beings with lives and dreams outside of their relationships.

The film’s chief antagonists are menacing without being interchangeable stereotypes. Devine’s cutthroat copper cuts a scary, ruthless presence, but is also more morally understandable than some of Ben’s fellow drivers. Ben has two chief competitors on the road as a chaser: Elvis (Shaun Benson), a greedy psychopath who’ll do anything for a quick buck and isn’t above threatening victims or fellow drivers with violence, and Wayne (Raoul Max Trujillo), a ball busting, but slightly more likable indigenous driver who’s more of a thrill seeker than a money maker. And then there’s Sean (Aaron Ashmore, relishing the chance to play an outright cad), who drives for the same company as Ben and is ostensibly his best friend. Sean is constantly offering Ben and Avery a way out of their money troubles, but Ben is right to believe that such altruism will come at too high a price. The characters collide with each other perfectly, leading to an increasingly complex plot that feels earned and organic instead of convenient and contrived. It’s a wonderful script that’s backed up by keen direction and an expertly assembled cast.

22 Chaser might sound like a low budget Canadian indie thriller with a quirky, eyebrow raising hook, but it’s one of the most surprising homegrown efforts of the year. It’s a well told story of a family man stuck in a soul sucking job with a guillotine slowly descending towards his neck. Every moment feels lived in and relevant instead of forced and distracting, taking cues from well constructed characters instead of genre conventions. Unpredictable and captivating from start to finish, 22 Chaser might end up being the best Canadian thriller of 2018. Here’s hoping it doesn’t get lost on viewers over amid summer breaks and blockbusters.

Check out the trailer for 22 Chaser: