For her first fictional feature since 2010’s Winter’s Bone (and only her fourth feature in the past fifteen years), director Debra Granik mounts an even further internalized depiction of pain, emotional suffering, and unwavering love with the austere, but heart-wrenching father-daughter drama Leave No Trace. A parenting drama that has been whittled down to its most primal essence, Leave No Trace tackles difficult social issues surrounding homelessness, care for veterans, personal freedoms, and paternal rights without shining giant neon lights on all the world’s ills and banging a moral gong in an effort to be recognized. It’s humane, singular, and illuminating without being preachy or judgmental; the kind of film that’s only equaled in modern cinema by the works of Kelly Reichardt. The world needs more films like Leave No Trace and more filmmakers like Debra Granik.

Will (Ben Foster) and his thirteen year-old daughter, Tom (Thomasin Harcourt McKenzie), have been living for several years in the national forests outside Portland, Oregon. They subsist mostly off whatever they can forage, but occasionally make trips into town so Will can go to the VA and sell off prescribed painkillers and anti-anxiety medications that he refuses to take, affording them some small creature comforts here and there. One day, Tom is spotted by a passing jogger, and it’s not long before the police come to break their camp. Initially, Will and Tom are separated, but following background checks and examinations, social services allow them to stay together as a family, provided that they live in a home that’s been provided for them. Tom warms to the idea of having four walls and a roof over her head, but still worries about her father. It’s clear that Will has chosen to live in the woods to block out the bad dreams and memories of his past military service, and that living in a standard environment makes him antsy, restless, and anxious. When Will gets the idea that he wants to move on once again, Tom’s loyalties to her otherwise loving and caring father are tested.

Leave No Trace has one foot firmly within a sub-genre of film that has been wildly popular as of late, but one that I personally can’t stand. I like to call it the “feral parent” genre, which includes films like the dire, overrated Captain Fantastic and the better, but wonky literary adaptation The Glass Castle. These are stories where parents are determined to live deliberately off the grid thanks to mental health issues and past trauma; forcing their kids to go along with whims with actions that are sometimes openly abusive or insidiously controlling. On paper, Leave No Trace sounds dangerously close to such narratives, but Granik and her co-writer, Anne Rosellini (adapting Peter Rock’s novel My Abandonment), are the first filmmaking team to tell such a story without leaving the viewer feel ill at ease. Some will justifiably worry about the perils faced by Tom and Will in both the natural and suburban worlds, but the love and care exhibited between the characters is genuine and believable. Will never forces Tom to do anything she doesn’t want to do, and there’s always the crushing sense that Will’s waiting for the day where his daughter will finally grow weary of his neuroses and leave him behind. 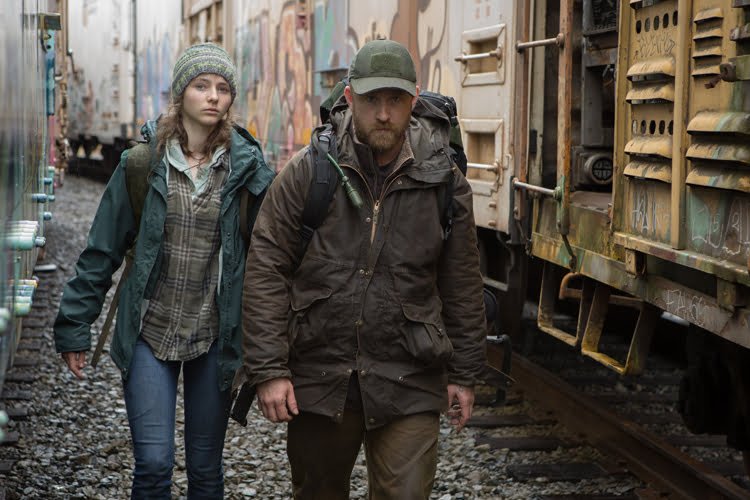 There’s no real plot to speak of in Leave No Trace; only linked situations that follow characters effortlessly and with a documentarian’s sensibility. Granik and Scottish cinematographer Michael McDonough (who are frequent collaborators) eschew dramatic conventions and staging in favour of unvarnished emotional realism. The degree of intimacy between the viewer and the characters is remarkable. The dangers in Leave No Trace aren’t necessarily governmental or natural, but psychological. Granik wants viewers to meet Tom and Will halfway, which is perfectly befitting of characters who fear the judgment of the outside world in different ways. Will fears everyone will think he’s crazy, despite his adherence to non-violence and a repression of any anger he might have. Tom fears that if she were forced to go to school, other kids will make fun of her and how she was raised. They can let their guards down in moments where kindness and charity are exhibited, but while Tom can easily accept and be moved by such outside actions (like learning how to groom rabbits or how to examine a beehive), Will remains wary, wounded, and unwilling.

Granik and Rosellini have done an exceptional job fleshing out these characters, but they leave the exceptional pairing of McKenzie and Foster to bring them to vivid life, with Granik largely staying out of their process. McKenzie is a revelation, making Tom into something far greater than any portrait of a child raised in the wild on screen or off. McKenzie places Tom’s intelligence and emotional empathy at the forefront. She has been raised under culturally unnatural conditions by a complex, loving parent, making her wise and caring beyond her years.

She’s matched every step of the way by Foster, who’s never been better. Usually known for playing alpha-male types, Foster’s performance here is one of immense vulnerability and sadness, despite looking on a physical level like a character that was written expressly for the actor’s specific set of skills. There’s not much doubt that Tom will get through this situation without too many scars, but one hopes and wishes that Will finds the place of emotional peace that he’s been seeking for years. If anyone here needs a warm hug and reassurance, it’s Will, and that’s something one normally doesn’t say about a character played by Ben Foster.

By not drawing attention to specific societal ills or topics of the day, Leave No Trace is able to say more about any number of issues without saying many words at all. Granik’s work begs the question “How much does the judgment of outsiders matter to us on an emotional level?,” and it proceeds to illustrate how it doesn’t have all the proper answers. It’s about how parents’ fears will impact their kids, and what parents can do to make sure repressed feelings of guilt, remorse, and sadness don’t negatively impact those closest to them. Leave No Trace breathlessly and poignantly illustrates how society can be crushing, marginalizing, and scary for anyone who has suffered great loss or trauma, and how moral victories are often small and rarely life changing. There’s beauty in life if one looks for it, and Leave No Trace asks the viewer to look for it in the lives of its characters. It asks a withholding of judgment or moral postulating. It’s the increasingly rare and moving kind of film made for people who want to feel something real and uncompromised instead of being spoon fed someone else’s thoughts and ideals. It’s a film made for flesh and blood human beings; not consumers of culture.

Leave No Trace opens in Toronto at TIFF Bell Lightbox on Friday, July 6, 2018. It expands to additional Canadian cities throughout the coming weeks.

Check out the trailer for Leave No Trace: