Mary Shelley is a competently made, but ultimately empty biopic that makes the mistake of treating its subject as a signpost instead of a flesh and blood human being. It looks polished, it’s well cast, and the historical author the story has been built around led a fascinating life, but as a story of empowerment told from the perspective of one of the world’s best and earliest female novelists, Mary Shelley falls flat and limp. It looks and moves like such a film should, but everything else strikes as phony and artificial.

Mary Shelley picks up the story of the Frankenstein author at the age of sixteen, just a few years before penning her most notable success. Portrayed by Elle Fanning, headstrong and uncompromising Mary Wollstonecraft Godwin lives with her supportive bookstore owning, philosopher, widower father (Stephen Dillane), her stern stepmother (Joanne Froggatt), and her doting, free-spirited stepsister (Bel Powley). After a few too many disagreements on the home front, Mary is sent to a boarding school in the Scottish highlands where she meets Percy Shelley (Douglas Booth), a struggling, but sensitive poet, and is immediately smitten. After being called away from her studies to return home, Percy finds a way to integrate himself back into Mary’s life. Despite an uneasy age difference (she’s a teen, he’s 21) and his fathering of a daughter in a previous marriage, Mary and Percy begin a life together. Not long into their relationship, Mary begins to realize that Percy isn’t quite the revolutionary poet or attentive husband that she initially thought he would be, setting off a course of life altering events that would lead to her greatest creation: a story built from years of unspeakable pain and trauma.

Mary Shelley is the second fictional feature from Saudi Arabian filmmaker Haifaa Al-Mansour, whose landmark 2012 feature Wadjda established her as the first female filmmaker from the country. Taking on such a curiously British story with an American leading lady strikes as an odd choice for Al-Mansour (who shares an “additional writing by” credit alongside screenwriter Emma Jensen), and the film’s degree of narrative and emotional contrivance suggests a filmmaker that’s out of their element. Instead of a character drama about one of the most influential writers to ever live, Mary Shelley amounts to nothing more than a diverting, but condescending costume drama that wouldn’t feel out of place on Masterpiece Theatre. It looks the part without necessarily sounding realistic.

The narrative is basic and unambiguous to a point of absurdity. The amount of narrative convenience that occurs throughout Mary Shelley lends what’s ostensibly a true story (with a few notable oversights and dramatic tweaks) an air of disbelief. It’s the kind of film where people show up at the most awkward moments possible for maximum dramatic effect. It compresses an established timeline to fit the confines of a feature length, fictional film, but it does so to such a degree that it feels like a capital-M movie and never like a serious biography of a literary figure that deserves a more nuanced treatment. Outside of some detail oriented production and costume design, Mary Shelley is an example of a biographical drama where all necessary grit and complexity has been buffed away in favour of straightforward melodrama.

Whenever Mary interacts with those around her, the dialogue strikes as hammy, and the personal relationships are forced. Every moment spent between Fanning and Froggatt feels copied verbatim from a wicked stepmother subplot in a Disney princess film. Mary’s interactions with her ineffective father feel like they should end with her old man either giving her a thumbs-up for succeeding or a long head shaking when she disappoints him. Every argument and confrontation comes with loaded dialogue and theatrical line readings that make every other scene feel like something that was created precisely because it would look and sound great in a trailer for the film. I understand that many of the characters peppered throughout Mary Shelley are poets and writers, but I’m relatively sure they didn’t always speak like there was an audience directly in front of them at all times. 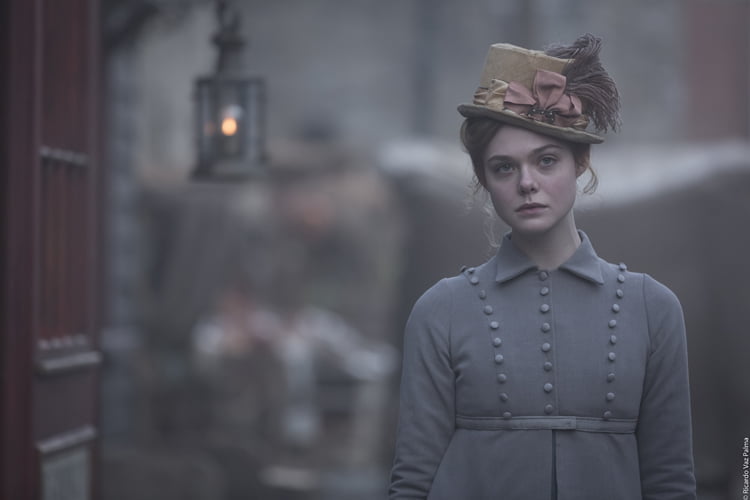 The unabashed theatricality of Mary Shelley doesn’t serve Al-Mansour well because such streamlining makes Wollstonecraft appear like a character, not as a person who actually walked the earth. Mary Shelley spends a lot of energy depicting its titular figurehead as a mother, wife, daughter, and sister because the frustrations that arise from such patriarchal driven period situations can make for easily decipherable and digestible drama. These elements are tried and true dramatic tentpoles, but it’s also spoon feeding the audience a less interesting story than the one that should be taking root. Mary Shelley perks up slightly towards then end once the writing and creation of Frankenstein has begun. That’s because Frankenstein was a work built from pain, anguish, and frustration. Not that the audience would know that, though. We see the pain, anguish, and frustration, but almost none of the catharsis or artistry. Instead, the film skips briskly along to how Wollstonecraft wasn’t initially allowed to take credit for her critically lauded bestseller because that’s the next tragedy to befall the heroine.

Al-Mansour’s film is quick to remind viewers that Mary Shelley was a woman coming of age during a time of rampant sexual inequality, and that’s important, but it neglects her talents as a wit and artist at every turn, offering up a standard “portrait of a lady” and not a look at a complex human being. Anyone who has studied the author knows that her life was far more fascinating, dramatic, and thought provoking than the stripped down approach that’s favoured here. There’s not much said about her artistry, intellect, or even her personality. I’m sure that painting her as a woman of her time was a bid to humanize a literary luminary, provide modernist subtext, and promote empathy, but it’s a bland, one-sided approach. For a film about revolutionary thinkers, Mary Shelley is anything but revolutionary, amounting to little more than a competent, unexceptional domestic drama.

Such a narrow perspective means that the performances are suddenly beholden to genre tropes. As such, everyone is as good as they can be. Fanning more than does her part in the lead, always subtly hinting that Mary is the smartest and most talented person in any given room. Booth’s performance starts off complex and assured, but as Shelley becomes more and more of an alcoholic, womanizing cad, he goes increasingly over the top with his work. Powley is a great talent who’s continually wasted in lacklustre supporting roles like the one she’s given here, but her character’s interactions with a cheeky Lord Byron (played more subtly by Tom Sturridge than Booth’s Shelley) offers some nice dramatic distraction from the main storyline.

Overall, Al-Mansour’s Mary Shelley is a fine enough film if you don’t want to learn anything serious (or particularly accurate) about one of history’s greatest authors. There’s nothing to differentiate this from any number of similarly themed period dramas. After an astounding and historically significant debut feature, Al-Mansour’s follow-up feels like a demo reel for more ambitious, big budget projects. She’s still a filmmaker with a keen eye and a hopefully bright future, but Mary Shelley feels like it could have been made by any journeyman or woman from anywhere in the world. It’s competent, but there’s no personality or originality on display here.

Mary Shelley opens in Toronto at Varsity Cinemas on Friday, July 13, 2018. It expands to Cineplex Forum in Montreal and Fifth Avenue Cinemas in Vancouver on July 20, to Edmonton (Princess), Saskatoon (Roxy), Regina (Rainbow), and Victoria (Vic Theatre) on July 27, and to Bytowne Theatre in Ottawa on August 3.

Check out the trailer for Mary Shelley: