The Chinese set (but predominantly filmed in British Columbia) action blockbuster Skyscraper wants to be an old school, high concept romp designed to blow audiences through the back of the theatre at every turn. Writer-director Rawson Marshall Thurber’s tale of a lone everyman attempting to save his family from terrorists keen on burning down one of the world’s largest buildings has certainly cribbed from the best, offering up action sequences and darkly humorous beats throughout. But when Skyscraper is compared to action and disaster movie heavyweights like Die Hard and The Towering Inferno (two films that Thurber’s has been compared to ad nauseam by this point), it’s clear that not every necessary genre lesson took hold.

Dwayne Johnson – everyone’s favourite choice to play a jacked-up everyman – stars as Will Sawyer, a former FBI agent who worked on a hostage task force, but now runs a private security firm. After a botched raid leaves him with only one leg, Sawyer has thrown himself at his job and his family. Sawyer’s wife, Sarah (Neve Campbell), his asthmatic son (Noah Cottrell), and daughter (McKenna Roberts) follow him to Hong Kong for the biggest business meeting of his career. Through a former FBI connection (Pablo Schreiber), Sawyer has been offered a chance to become a security analyst for Chinese billionaire Zhao Long Ji (Chin Han) and his epic skyscraper home, The Pearl. Dwarfing Dubai’s Burj Khalifa and double the size of the Empire State Building, the fictional tower is not only the tallest building in the world, but also allegedly the safest and most secure. That will turn out to be completely false when a group of multinational mercenaries – led by Roland Møller – start a fire on one of the upper floors in a bid to trap Zhao and steal something he’s keeping safe in his penthouse apartment. Sawyer has been set up as a patsy, and his family is trapped on a floor not far from where the fire started. It’s up to Sawyer to evade the authorities, break back into an impenetrable fortress, save his family, save Zhao, and stop the villains.

Genre films pitched at the same level as Skyscraper are a lot like pizza. As long as the ingredients are fresh and tasty, it doesn’t matter how they appear as a package. Provided that viewers can get some small amount of enjoyment out of such a film, it can be deemed as a successful exercise. Skyscraper is a pizza that has been made with love, crafts, and care from very basic ingredients, some of which are nostalgic and appealing, and others that leave no impression whatsoever. It’s good, and if we keep up with the pizza analogy, it’s one that you’d probably order again, but only when you don’t feel like cooking and the really good pizzeria charges too much to deliver to your house. Skyscraper doesn’t reach the same dizzying heights as Die Hard or The Towering Inferno. It’s much more on the level of something like Sudden Death, Jean Claude Van-Damme’s perpetually underrated Die Hard knock-off about a security guard trying to save his family when a hostage situation threatens the final game of the Stanley Cup finals. It’s solid, entertaining, and unexceptional on the whole, but still boasting memorable, likable elements.

Johnson’s natural movie star charisma helps, and he’s one of the few action heroes who isn’t afraid to look silly, outlandish, or vulnerable if called upon to do so. Skyscraper marks what might be the Johnson’s most gruelling and physically demanding on screen role, but that doesn’t mean that he’s forsaking the material’s emotional core. It’s pretty easy to offer up a plot about a family man trying to save his family, but it takes a gifted performer to make someone care about a story that has been told hundreds of times before. Johnson is that kind of performer, and Skyscraper (which he also produced) serves as a perfect distillation of his talents. 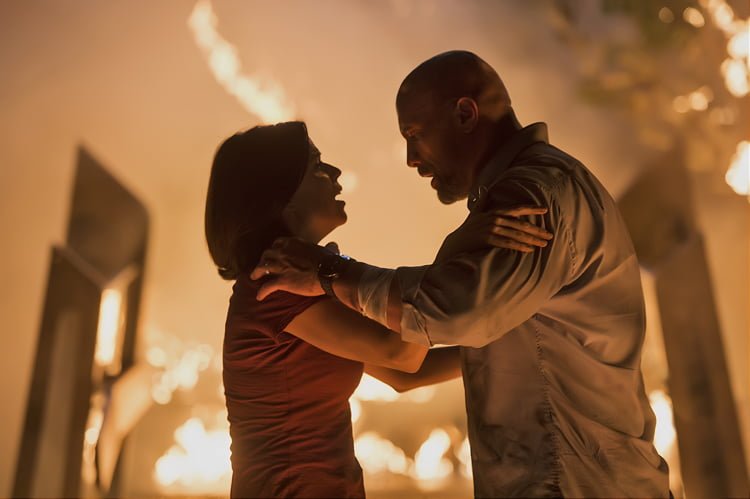 The bigger surprise here is Campbell, who by choice and by circumstance, hasn’t been given a role this good since the Scream franchise, acting as Skyscraper’s most enticing wild card element. Thurber makes what could have been another doting wife in peril into an equally capable badass trapped inside the building with their kids. Will might have the ability to get them out of the building safely, but it’s Sarah (who’s also a military veteran) who has to keep them alive. It’s a nice, welcome touch for a film that’s relatively standard in every other respect to elevate such a character to an almost equally important role. She’s not on the poster because she’s not hanging off the side of window ledges and towering cranes like Johnson is, but Campbell’s more than game performance is just as big a part of Skyscraper’s overall success. (It also helps that their on-screen kids are likable and not annoying caricatures, despite one of them having a physical disability.)

Thurber (Dodgeball, Central Intelligence) proves to also have a way with large scale action sequences, and outside of some dodgy editing that sometimes clashes with the director’s sleeker aesthetic, Skyscraper delivers the goods. Johnson and Campbell are each given a pair of memorably hard hitting hand-to-hand fight scenes. There are plenty of clever nods to the many uses of duct tape, including one sequence where Will has to climb into a pair of enormous wind turbines that make’s a similar stunt attempted by Tom Cruise in Mission: Impossible – Ghost Protocol look like child’s play. Making Will an amputee adds a nifty degree of difficulty to the hero’s quest, including some inspired uses of his fake leg. The building even comes with a high tech hall of mirrors at the top, which as soon as viewers see it they’ll know exactly where the film’s climax is going to take place. The tension is sustained throughout via Thurber’s set pieces and the skill of the main performers, but there’s still something missing at the heart of Skyscraper.

The biggest void here is that the villains are uninteresting, hammy, never frightening, and unthreatening. Møller talks a tough game, but the actor isn’t charismatic enough and the character isn’t crazy enough to make the viewer sufficiently repulsed or interested. Noah Taylor’s aggravating and obviously nefarious henchman is so unsubtle and goofy that I think the actor ate the moustache he was supposed to be twirling. Hannah Quinlivan fares the best of the core villainous trio as the ass kicking hacker woman outside the building, but she’s still so thinly defined that the character barely makes an impact. The fire and explosions are meant to be the biggest dangers in Skyscraper, but good heroes need nasty villains to fight, and at a certain point it feels like Skyscraper might be better off leaning into its disaster movie elements than the action movie beats. Villains in a film like this shouldn’t feel like afterthoughts, but that’s exactly how they come across here.

Motivational qualms aside, Skyscraper remains an entertaining hundred minutes of watching Johnson and Campbell dipping, diving, ducking, and dodging obstacles in their way. You’ve seen this all before. I’ve seen this all before. We’ve all seen this done worse before, and this will do the job just fine if all you want to see is stuff blowin’ up real good and Johnson doing what he does best.

Check out the trailer for Skyscraper: