Review: Don’t Worry, He Won’t Get Far on Foot 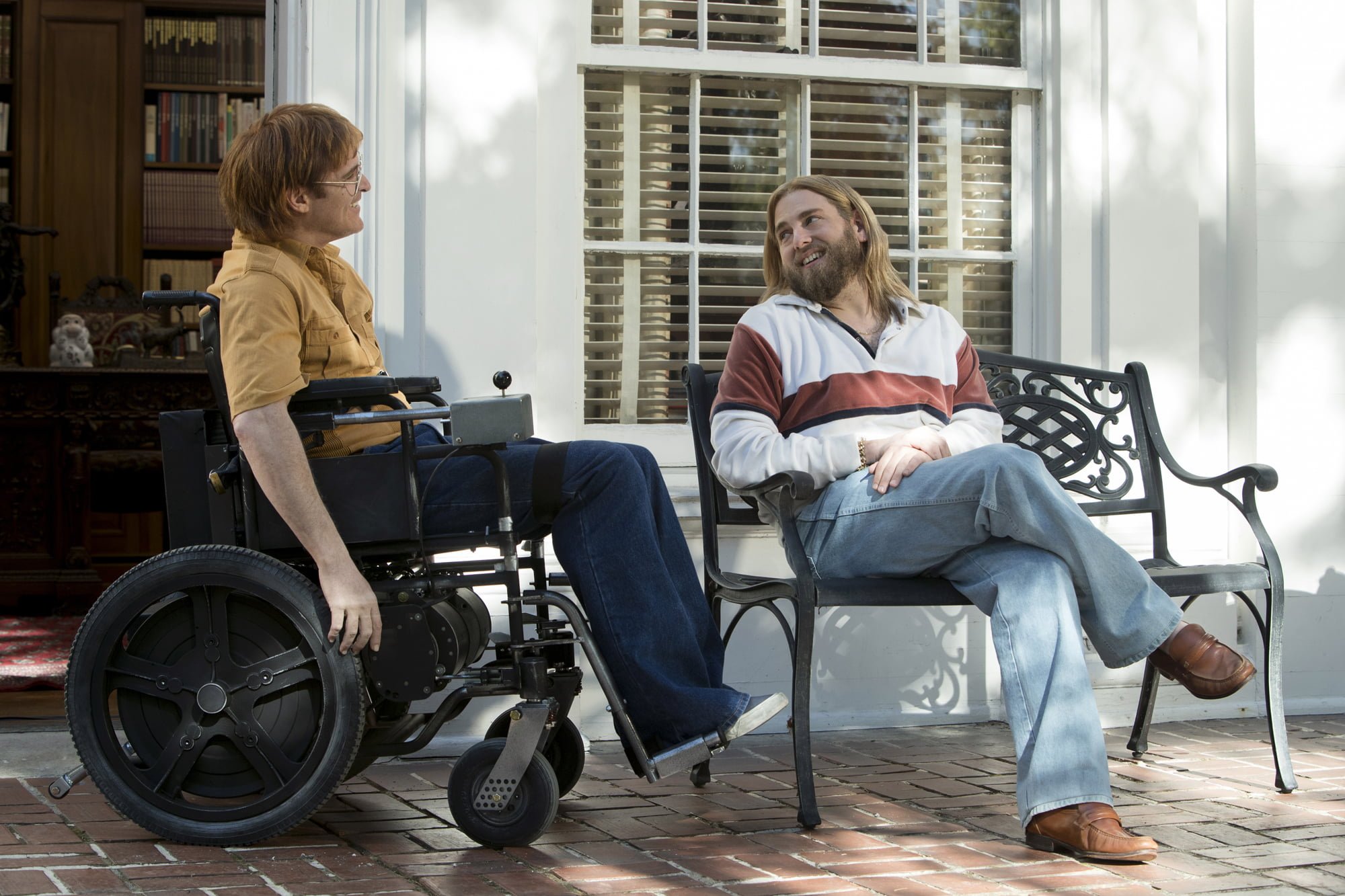 An easily digestible, inspirational tale of addiction, injury, disability, and recovery, Gus Van Sant’s John Callahan biopic Don’t Worry, He Won’t Get Far on Foot finds the respected filmmaker firmly in his feel-good, Hollywood friendly zone. Once known for making sometimes daring and artful independent films (with a few notable, audience friendly hits peppered in-between), Van Sant has spent the better part of the past decade churning out mostly dutiful, but forgettable dramas that strive for mass market appeal. Don’t Worry, He Won’t Get Far on Foot doesn’t break Van Sant out of this rut, but of all the films existing in that space, it ranks somewhat on the higher end. That’s still not necessarily an endorsement.

Joaquin Phoenix stars as John Callahan, a successful cartoonist who found himself paralyzed from the chest down following a drunk driving accident at the age of 21. Don’t Worry, He Won’t Get Far on Foot (which takes its name from one of the artist’s most beloved and wittiest captions) bounces around a very specific timeline, specifically the late 1970s through the 1980s, which were the most tortured and most successful years of Callahan’s life. The choppiness isn’t a reflection of how John can’t remember most of his drunken past, but rather his inability to come to terms with the issues that compound and enable his weaker impulses.

Writer-director Van Sant, working from Callahan’s memoirs, bounces between a clean and sober protagonist speaking in front of an adoring public crowd, flashbacks to darker times, Alcoholics Anonymous meetings run by John’s flamboyantly gay sponsor (Jonah Hill), montages of key events that wipe from one moment to the next, and animations of some of the cartoonist’s greatest drawings. The variety of approaches and the shifting timeline initially lends Don’t Worry, He Won’t Get Far on Foot a great deal of energy in the early going, but that momentum proves to be unsustainable.

In the film, Callahan constantly bemoans the fact that he was given up for adoption by “a mother that didn’t want him,” and he leans on that excuse as hard as he can for any poor habits he’s picked up along the way. It’s an interesting thread that’s sometimes picked up before being quickly dropped again, dismissed as just another excuse that an alcoholic or an addict would give to someone when they’re seeking forgiveness and redemption. But beyond that one tidbit about Callahan, the audience won’t learn a thing about him as a human being before the character hit rock bottom.

Don’t Worry, He Won’t Get Far on Foot is one of those films about addiction that makes the mistake of defining its main character by their chose vice, not by their personality, past, or circumstance. All we really know about Callahan is that he was adopted, one day he got into a car with a hard partying enabler (Jack Black), and then he was in a wheelchair struggling to balance his new disability with his addictive personality. Anything beyond that remains a complete mystery. It’s the rare case of a biopic where the Wikipedia entry of the person being profiled might be more illuminating than the film built around them. 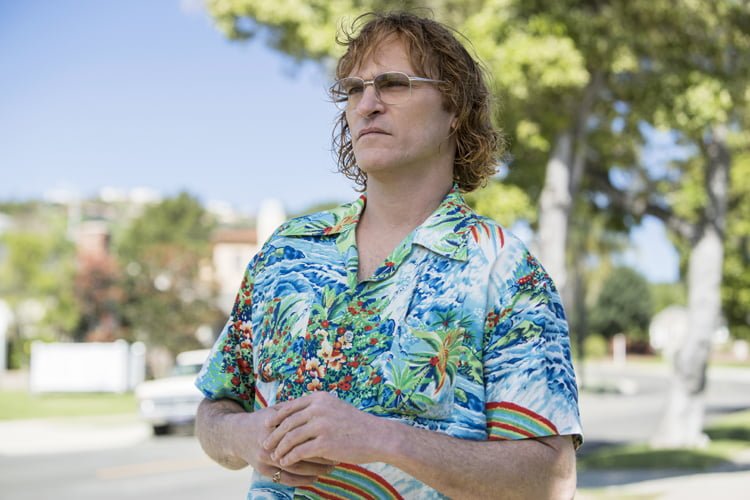 That lack of deeper characterization and backstory kills any true sense of empathy. Anyone who has witnessed or suffered through the ravages of addiction or disability will surely recognize the technical beats that occur throughout Don’t Worry, He Won’t Get Far on Foot, but they’ll care only so much. It’s easy to show suffering and anguish and make an audience want to see someone crawl from beneath it. But that’s entirely hollow when the person we’re supposed to be empathizing with feels more like an outlining of various personality traits and tics and not a flesh and blood human being. The fact that Callahan (who passed away in 2010, but gets a story credit here) lived this life and survived it for as long as he did is inspirational, but we never learn what really drove him there in the first place. We don’t even have enough to theorize about it. The character exists in a vacuum of addiction that at times feels divorced from the outside world. This has to be a conscious choice on the part of Van Sant to tell the viewer as little as possible to depict the self-centered nature of addiction, but that just makes for a deathly dull and frustrating final product.

The side characters are equally drab and thin, with the exception of Hill’s sponsor, who speaks of a fruitful and equally tortured life that at times sounds like it would make for a better movie. Rooney Mara is thoroughly wasted as a Norwegian hospital volunteer that would eventually become Callhan’s caregiver and girlfriend. Black pops up for two scenes, which makes sense considering that this person was barely in Callahan’s life, but he still acts like he’s from a different film altogether. Tony Greenland has a sizable part as Callahan’s live-in caregiver, and all we really learn about him is that he sucks at his job and he’s a low-key jerk. The Alcoholics Annoymous segments – which Van Sant cheekily shoots as if they were part of a slicker documentary version of events, full of sudden zooms and close-ups – are populated by noteworthy character actors like Udo Kier, Beth Ditto, Kim Gordon, Mark Webber, and Ronnie Adrian. They all get a scene or two to show their range as performers, and in those moments these side characters become more fully developed than the entirety of Phoenix’s role. If it weren’t for Hill and his fellow AA “piglets” (as the character calls them), Don’t Worry, He Won’t Get Far on Foot would be rather worthless.

Phoenix’s performance matches the mechanical and unnecessarily convoluted nature of Van Sant’s material. Boasting a mop of carrot-orange hair and thick rimmed glasses, Phoenix aces the performative aspects of Callahan’s life: the paralysis, the drunkenness, the doodling, etc. But there’s nothing else for the actor to work with, and I doubt there are any other performers who could have made something this threadbare come to life. I believe that Phoenix is playing a paralyzed drunk trying to get clean. I don’t believe he’s playing a person with any sort of backstory or inner monologue whatsoever. (Incidentally, the idea to make Don’t Worry, He Won’t Get Far on Foot into a film has been something Van Sant has tinkered with for years, initially wanting to cast the late Robin Williams as Callahan. While I would have loved to see what Williams would have been able to do in the part, if he was going from the exact same material Phoenix was given, the same problems would still exist regardless of who was in the lead.)

Van Sant takes what little he has and puts it all into a streamlined, unexceptional package. Don’t Worry, He Won’t Get Far on Foot is assuredly competent on a surface glance, but there’s an enormously hollow centre at its core. Considering the films that Van Sant made in his 90s and early aughts heyday, one almost expects that a film he’s made about addiction would have a lot more art and substance to it. Instead, all he turns in are a set of bullet points inked in expert penmanship. It’s fine if you want a half-hearted look at how AA can help people, but it’s a really weak biography and an even weaker drama.

Don’t Worry, He Won’t Get Far on Foot opens at Cineplex Varsity & VIP in Toronto and Fifth Avenue Cinemas in Vancouver on Friday, July 20, 2018. It expands to further Canadian cities in the coming weeks.

Check out the trailer for Don’t Worry, He Won’t Get Far on Foot: