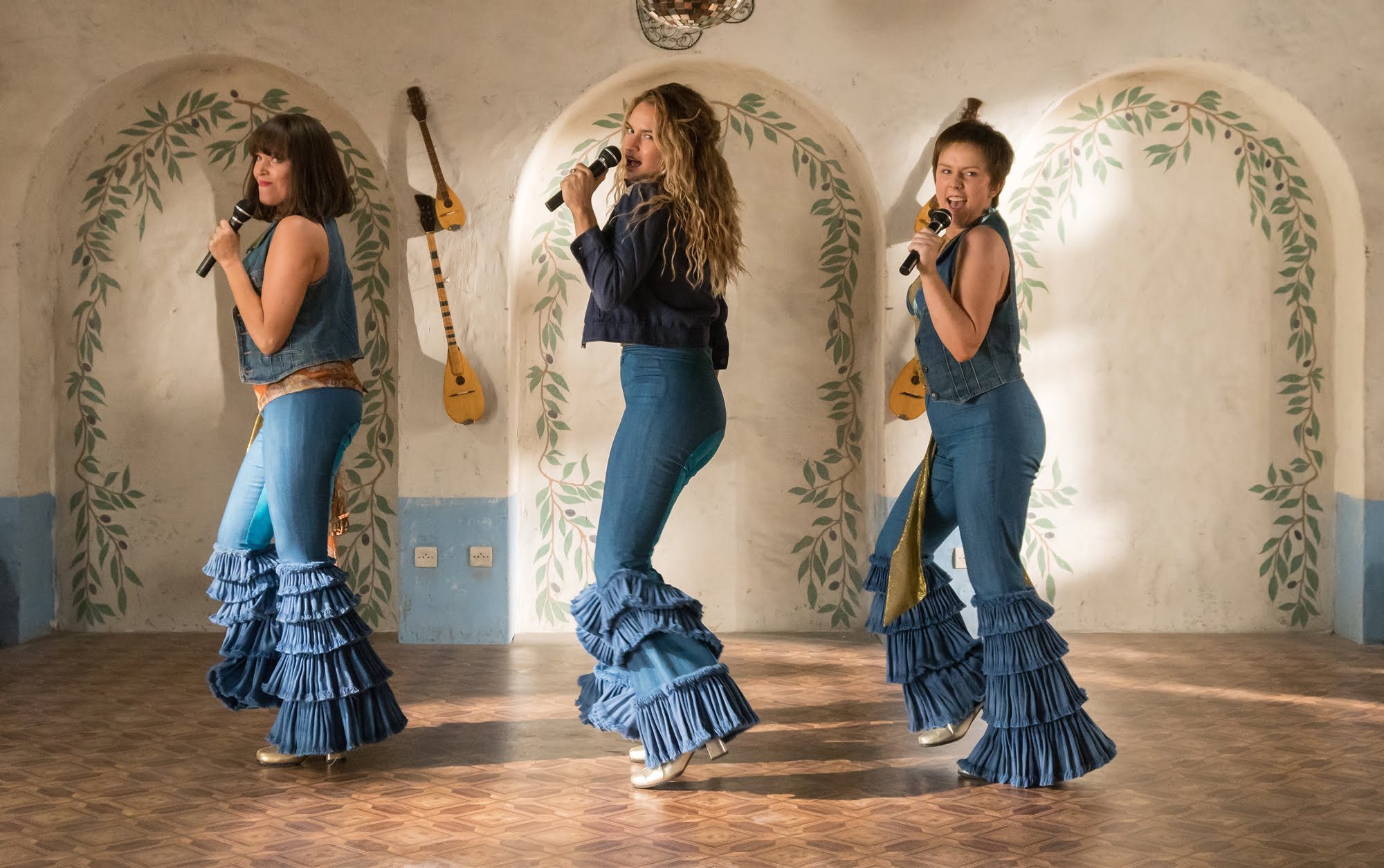 Lacking the manic gusto that made its highly lucrative predecessor such a success, Mamma Mia! Here We Go Again will appeal only to ABBA devotees who want more of the same thing they got last time with somewhat diminished results. The first Mamma Mia! wasn’t a great film by any stretch or metric, but the appeal was easy to see: a bunch of easily recognizable songs from one of the world’s biggest musical acts wrapped up in a glittery bow and piped like a sugar rush straight into the brain of anyone willing to give in to it. Although there’s one major improvement to be found in Mamma Mia! Here We Go Again (which skips the original’s stage roots and makes its way straight to cinemas), most of this humdrum sequel strikes as tiresome, unsurprising, and best to only view with several highly intoxicating drinks in one’s system for any sort of artificial enjoyment.

Roughly one year after the passing of her mother, Sophie (Amanda Seyfried) is putting the finishing touches on the hotel she’s about to open on the Greek island of Kalokairi. Although she’s excited to make her mother’s dream of turning a dilapidated farmhouse into a destination resort, Sophie has other matters on her mind. She’s worried that wealthy patrons won’t show up. A storm threatens to ruin all of her hard work. Two of her three dads (Colin Firth, Stellan Skarsgård) might not be able to make the grand opening. Worst of all, her husband (Dominic Cooper) has been learning the ropes of hotel operation in New York City, and he’s begging her to live there instead of following in her impetuous mother’s footsteps.

But that’s only one storyline that runs throughout Mamma Mia! Here We Go Again. Half the film is comprised of flashbacks illustrated to show how Sophie’s mother fell in love with the island as a young woman, hooked up with three very different men, and decided to make a go of it as a single mother. I don’t know who exactly is having these flashbacks, since the character that would be happening is dead, so I guess you just have to go with it or not. Instead of being played by Meryl Streep, the role of young Donna falls to Lily James, and she’s precisely the one major improvement that I was referring to earlier.

After graduating from Oxford, Donna makes her way across Europe, pinpointing Kalokars as her final destination. Along the way she meets Harry (Hugh Skinner, mugging intensely as Firth’s younger surrogate), a virginal nerd who’s smitten at first sight, Bill (Josh Dylan, nailing his turn as young Skarsgård, the second best thing in the movie), a suave, seductive, Swedish boatman, and Sam (Jeremy Irvine, playing young Pierce Brosnan and making little impact), an island resident and lover that keeps a major secret from his new girlfriend.

New director and co-writer Ol Parker (Imagine Me & You, The Best Exotic Marigold Hotel Movies) gets story assists from go-to rom-com scribe Richard Curtis and the musical’s co-creator Catherine Johnson, but honestly this film could have been made by a computer that was forced to watch the previous film on a loop for a thousand hours before spitting out an almost exact approximation. The first film and the original musical were annoying in their own way, dumping on layer after layer of sugar in place of substance. Both films are vehicles to sell spectacle and a soundtrack of ABBA hits, but this one is particularly bereft of ingenuity. Recycling a fair number of songs that were trotted out in the first film and offering few new numbers that are all that memorable, Mamma Mia! Here We Go Again seeks to recapture a feeling that viewers will remember without giving them anything new that could potentially sour the experience. It’s a film that takes zero chances with its material; aimed squarely at the type of person who goes to the same restaurant over and over again, looking at the menu for twenty minutes at a time before shrugging and ordering the same thing they always get. It’s not so much a valuable or particularly engaging piece of cinema. It’s just an excuse to go to the movies for people who don’t particularly care what they’re seeing as long as it makes them feel happy. 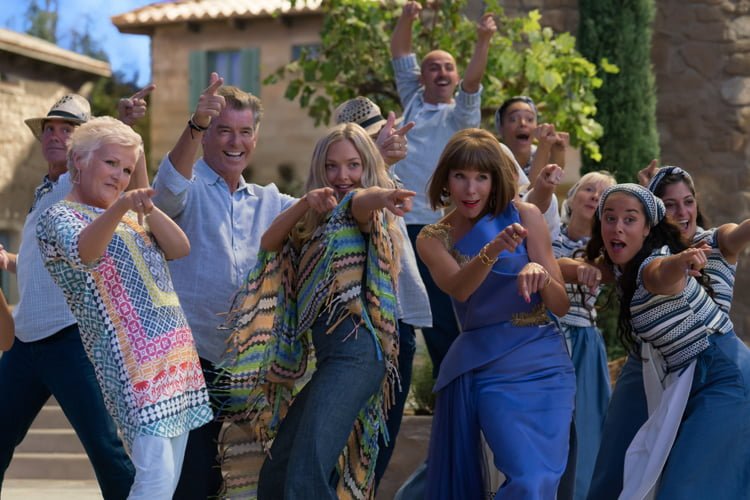 Outside of some slicker and tighter choreography in some of the film’s more elaborate dance numbers, Parker doesn’t acclimate himself well to the musical genre. Outside of some visual match-cuts, Parker struggles with cutting back and forth between the storylines of past and present, often interrupting one of the threads mid-stream for no discernible reason, creating a film that never finds a sustainable momentum and pace. Mamma Mia! Here We Go Again doesn’t know when to speed up or slow down, making for a rather tedious example of toe-tapping entertainment. The first hour of the film feels unconscionably long, while the second hour breezes by so briskly that it feels like the movie is trying to shove people out of the theatre to get the next show in.

I feel obligated to point out that the trailer for Mamma Mia! Here We Go Again is also highly misleading. Anyone expecting the story being outlined in the film’s previews will have to wait until the final thirty minutes for any of that to happen. It’s a curious choice, but from a business standpoint, I guess it makes sense to obscure the fact that most of the first film’s major stars won’t be appearing until this thing is almost over (except for Brosnan’s dad, who stayed behind on the island and is the only returning cast member outside of Seyfriend to get any added depth). I guess Lily James and her younger co-stars wouldn’t look as good on a poster if they weren’t being flanked by the older, more established actors that would serve as bigger draws for the film’s core demographic of middle aged women. I personally don’t care one way or the other, but if you’re going into this expecting all of your favourites from the first film or to see Cher light up the stage as Sophie’s absentee grandmother, you’ll be waiting a very long time.

Personally, holding off on “getting the band back together” was what I enjoyed most about this, because the time spent alongside James as a younger version of Meryl Streep’s character from the first film is far more endearing than watching Seyfried pout and fumble her way through problems the audience knows will be easily fixed. Young Donna’s plotline is standardized, frothy romance, but it lends itself to yet another star making performance from James. There isn’t a single moment where Donna isn’t a transfixing, charming, and intoxicating person to be around. It’s far removed from the annoying, scatterbrained mother character Streep got a chance to play. It feels like a different character, and James embraces her with open arms. As for her vocal capabilities, she blows everyone from this film (except possibly Cher) and the original out of the water with the force of an atom bomb. It’s a performance so great that one could easily forget that the character was previously played by Meryl Streep. If there’s any tangible reason to see Mamma Mia! Here We Go Again, it’s James.

There’s some fun bits scattered throughout Mamma Mia! Here We Go Again, but it almost isn’t worth sitting through a lot of the same songs a second time (including Skinner delivering “Waterloo” so turgidly that I almost walked out until it was over). A brief aside where young Donna and Bill help a lovelorn fisherman (Gerard Monaco) offers easily the biggest and most memorable laughs. Christine Baranski and Julie Walters are on hand throughout as Donna’s best friends, getting the lion’s share of chuckles and smiles; an accolade shared by Jessica Keenan Wynn and Alexa Davies, who play the younger versions of Baranski and Walters, respectively. And yes, it’s nice when Cher finally decides to show up to sing “Fernando” alongside Andy Garcia’s woefully underused hotel manager.

But none of this really matters and none of it is very memorable on an entertainment level. It’s made so people remember the tunes contained within it as catchy pop ditties with some good hooks and admittedly decent songwriting. You could listen to an ABBA album and get better versions of all of these songs, or you can have a few drinks, go to the cinema and get a little silly. Personally, I think listening to an album takes far less time and is far more pleasurable, but if you like the communal aspect of seeing the first film in a theatre, Mamma Mia! Here We Go Again is back to do the exact same things with a few tweaks. It’s assuredly a sequel that doesn’t need to exist, even going as far as including a character that straight up says “If you think, you get unhappy. Thinking is a mistake.” The first film was similarly brainless, but this one can’t match the original in terms of madcap intensity and ingenuity. It’s charms are a lot easier to resist.

Check out the trailer for Mamma Mia! Here We Go Again!: