Mission: Impossible – Fallout finds the high octane and high risk Tom Cruise action franchise on assured, familiar footing, further establishing this now six film long series as one of the most dependable and lovingly crafted bits of Hollywood entertainment in the process. An ambitious blend of the familiar and the novel, Mission: Impossible – Fallout will give viewers the death defying derring-do they’ve come to expect from the franchise, but also a much needed and unexpected payoff for those who’ve stuck around through several sequels that previously boasted only loose connections to each other. As one might say, this one is for the fans, and considering that the series has been largely likable to this point, it’s easy to subscribe to such a sentimental gesture.

Mission: Impossible – Fallout is the only film in the series to tie directly and intricately to the film that came before it, in this case Rogue Nation. After sparing the life of a British spy turned anarchic terrorist (Sean Harris), ace Impossible Mission Force agent Ethan Hunt (Cruise) has to reckon with “the fallout of all [his] good intentions.” With the terror cell leader getting bounced around between various prisons in various countries to answer for his crimes, well organized splinter sects have formed to carry out terrorist activities around the world. One such cell – led by the mysterious, unseen, manifesto writing “John Lark” – has been attempting to procure a large amount of weapons grade plutonium. After an attempt by Ethan and his team to intercept the plutonium goes sideways (thanks to Hunt’s moral inability to let a member of his team die in service of a mission), the super-spies immediately want to spring into action and retrieve the stolen radioactive materials. The botched job has raised the ire and suspicion of a CIA bigwig (Angela Bassett) who insists one of the agency’s own (Henry Cavill) join Hunt’s team to keep the mission on track and to make the snap “kill or be killed” decisions Ethan seems incapable of making.

Previously, one of the elements that made the Mission: Impossible franchise so unexpectedly fun and refreshing was the changing of big name directors between entries. Brian De Palma, John Woo, J.J. Abrams, and Brad Bird all made vastly different films with the first four entries in the franchise, each with varying degrees of success and style, but all of them eminently watchable and entertaining. Mission: Impossible – Fallout marks the first time that a filmmaker has been given a second crack at similar material, with Rogue Nation writer-director Christopher McQuarrie returning in both roles. While the series’ previously intriguing authorial M.O. to create a series of entertaining, stand alone sequels has been somewhat disappointingly abandoned in favour of a more encompassing “world building” franchise, McQuarrie not only delivers a satisfying follow-up to his predecessor, but has succeeded in making a film that outshines and polishes his previous work.

Mission: Impossible – Fallout contains a lot of depth and substance that was missing from its viscerally thrilling, but admittedly lesser predecessor. McQuarrie’s latest screenplay might contain a touch-too-many side plots and ancillary characters that don’t add much other than ballooning the running time to the 2.5 hour mark, but the connections made to Rogue Nation are more intriguing and high stakes than anything contained in the previous sequel. It’s clear that McQuarrie had a larger story in mind when he made his previous film, and now that everything has come into focus, it makes Rogue Nation and Fallout feel more like a single film that’s been divided into two parts rather than a cheap sequel that’s rehashing everything that came before it. A re-watch of Rogue Nation is advisable before diving into this one (which I was glad I did, since I remembered almost none of McQuarrie’s previous crack at this material outside of the action sequences). I also suggest going back and watching De Palma’s first film and Abrams’ third entry for a bit more context and enrichment, as McQuarrie’s vision is the first to both subtly and directly concern itself with matters of the past.

While M:I3 provides an obvious and deeply personal wrinkle in Hunt’s quest to once again clear the names of his team members, tonally Mission: Impossible – Fallout is more indebted to De Palma’s twisty and vastly more paranoid original. Once again there’s talk of moles within government organizations, but for the first time since the first film, there’s a genuine sense that Hunt might be losing his marbles or that he’s become secretly corrupt. McQuarrie and Cruise nicely and subtly play with the character’s frustrations and moral compass, occasionally making the viewer believe that if Hunt somehow did snap that we’d be willing to follow his journey into darker spaces. It helps that Cavill’s meat-headed CIA stooge is purposefully daft and unlikable, with his dynamic alongside Hunt’s goody-goody providing for some welcome comedic tension throughout, especially during an otherwise brutal bit of hand-to-hand combat in an upscale washroom. 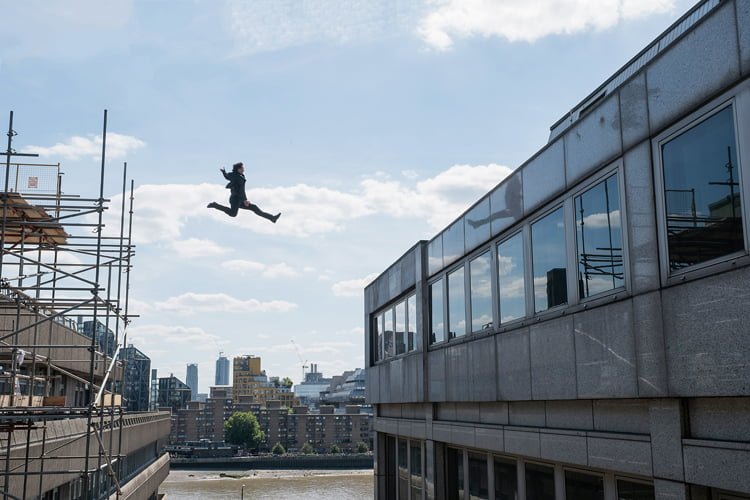 Although Hunt’s tactics have always been questioned and put to the test throughout the series, the notion that Ethan might not be able to contain a massive loss of lives throughout this new mission offers Cruise a bit more to work with this time out. Similarly, McQuarrie finds new and interesting things for Ethan’s compatriots and antagonists to do along the way. Simon Pegg’s Benji gets more time reluctantly putting himself in harm’s way as a field operative, while Ving Rhames’ Luther has plenty to keep himself busy, sliding firmly back into position as Hunt’s number one tech guy. Rebecca Ferguson returns from the previous film as an MI6 agent who’s been assigned to a mission that runs counter to Ethan’s objectives. Harris basically plays the same one-note doomsday spouting baddie that he did last time, but Vanessa Kirby makes for a nice, suitably slimy and smarmy addition to the Mission: Impossible rogues’ gallery as a duplicitous arms broker hiding behind a philanthropic cover.

But the main attraction for most moviegoers heading into any Mission: Impossible film is the elaborate, largely practical stuntwork. Once again, Cruise performs all of the dangerous, almost openly insane stunts himself, throwing himself headlong into the film’s action with the zeal of Jackie Chan in his prime. Whether he’s riding on a motorcycle through crowded city streets, dangling from a cliff by his fingertips, sprinting furiously across the roofs of buildings, or crashing a helicopter into a mountainside, the actor is doing it all mostly by himself. Mission: Impossible – Fallout contains plenty of moments that make one fear for the actor’s health and safety, but no Hollywood megastar is capable of pulling off such unbelievable feats of craziness as Cruise.

While star-producer Cruise has driven the franchise and deserves the lion’s share of praise directed towards it, the technicians backing up McQuarrie’s direction should be receiving equal recognition. If the action sequences look ugly or incoherent, such spectacle is doomed to fail or disappoint, and everyone involved here is striving for the best possible experience. While there have been plenty of gifted craftspeople who have worked on the previous films, none of them had a cinematographer quite like British lenser Rob Hardy (Annihilation, Ex Machina) and a team of dedicated camera operators that are capable of matching Cruise’s intensity beat-for-beat. Whether Cruise is driving, flying, or running to save the day, Hardy and his crew are right there, bobbing and weaving in and out of traffic, leaping from building to building, or falling out of the sky, the cameras are always following closely alongside their star, careful to document every spill, near fall, or triumph. Everyone who picked up a camera for Mission: Impossible – Fallout deserves praise for being just as intensely committed to making the audience gasp as Cruise and the rest of the stunt team. Next to Bird’s more flashily dazzling Ghost Protocol, Fallout becomes a high watermark for the franchise in terms of technical acumen and attention to kinetic details.

By the end of McQuarrie’s second film in the series, there’s a sense of closure to suggest that new stories could be on the horizon, setting the series back on its previously eclectic track. I’d welcome a return to stand-alone storytelling, but I can’t say that Mission: Impossible – Fallout doesn’t deliver the goods on every possible level. It’s rich, exciting, thoroughly engrossing popcorn picture entertainment made by people who want to give the audience everything they came for and then some. In a summer chockablock with disappointing, unnecessary sequels, Cruise’s franchise re-emerges as a gold standard for such filmmaking. I’m not sure what stunts they could pull off next that won’t straight-up kill the aging Cruise, but as always, I’m eager to see what’s next.

Check out the trailer for Mission: Impossible – Fallout: