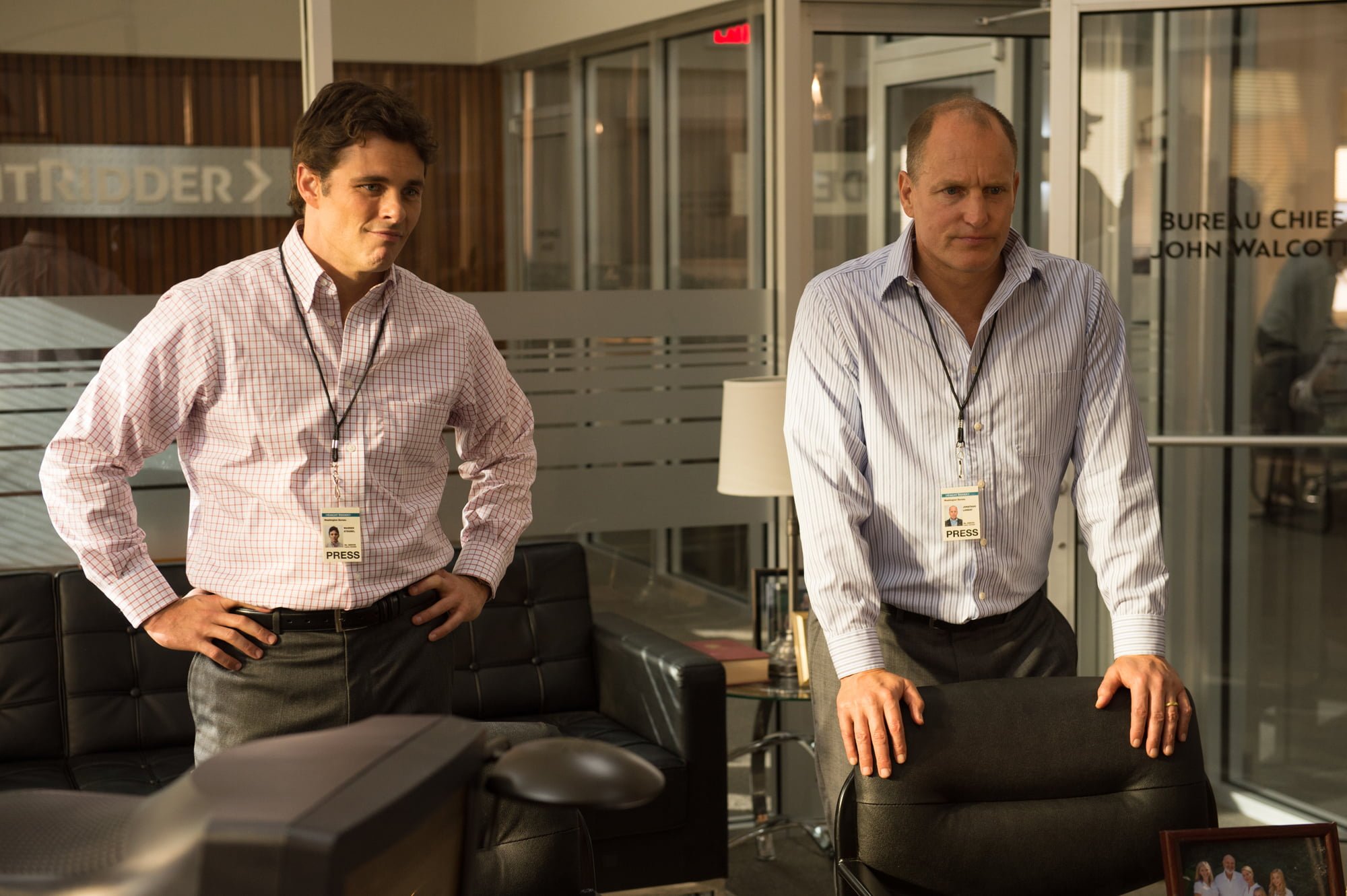 Shock and Awe, the latest film in as many years to look at how good, balanced, and thoroughly researched print journalism has become more important than ever, is a briskly paced, low-key, and effective drama from once heavy-hitting, Oscar nominated filmmaker Rob Reiner. Since the turn of the century, Reiner’s career has been floundering, but fascinating. With the exception of The Bucket List (which remains one of his career worst and most insulting films), Reiner hasn’t had a mainstream success, preferring to work on independently produced productions instead of studio fare. Regardless of the quality of the films being produced, Reiner’s late output boasts the spirit of someone who still enjoys making movies and sharing his personal feelings with the world, regardless of the project’s size or status. Shock and Awe has a bit more pedigree than most of his recent output, but it certainly fits nicely in Reiner’s newfound indie vigour.

Based on a true story, Shock and Awe follows Knight Ridder syndicate reporters Warren Strobel (James Marsden) and Jonathan Landay (Woody Harrelson) as they report on the days following the 9/11 terrorist attacks from the publishing titan’s Washington D.C. bureau. Not even a day after the attacks, Strobel starts getting wind that the Bush administration is looking heavily into a connection between Al Qaeda and Iraq, while largely ignoring any military operations focused on fighting terrorists in Afghanistan. After Landay returns from a brief trip to the field in Afghanistan, he joins Stroebel in the quest to uncover why the Bush administration is claiming that Saddam Hussein has connections to Islamic terrorists and is starting to build weapons of mass destruction, two facts that are easily disproven by anyone who cares to look into them. With nationalism at an all time high, respected and venerable news outlets like The New York Times and The Washington Post are reporting unverified claims made by The White House as the truth, leaving Strobel, Landay, their boss (Reiner), and a veteran military consultant (Tommy Lee Jones) as some of the few dissenting voices in the mainstream media.

While not in the same league as The Post, Spotlight, or All the President’s Men, Shock and Awe is still a successful bit of bolstering for the Fourth Estate. Eschewing a longer sort of history lesson, Reiner and screenwriter Joey Hartstone (who penned the biopic LBJ, the most recent collaboration between the writer, Reiner, and Harrelson) dive right into the action and investigation. Hitting the ground running lends a sort of kinetic quality to Shock and Awe that most films about flat-footed journalism lack, but it also leads to sometimes cringe inducing dumps of expositional dialogue and political grandstanding that are unconvincingly delivered in single gasps. It’s not a good look, but the passion of Reiner and his cast deliver Hartstone’s sometimes hammy speechwriting with appropriate fire and conviction.

The story of the Knight Ridder reports on Bush’s Iraq invasion agenda isn’t particularly thrilling or sexy, but Reiner does what he can to make sure everything feels as vibrant and immediate as possible. Although he’s often taken to task for picking safe, streamlined material (which Shock and Awe assuredly is), it’s hard to pick on Reiner’s visual style and sense of pacing. Reiner likes to keep things snappy and constantly in motion, preferring to follow people or look around an office while someone’s talking instead of static shots on people’s faces. Reiner’s style well serves a film about people talking at each other from other sides of a desk or table. There’s another version of Shock and Awe that would be efficient to the point of banality, and while the story isn’t exactly one with a lot of danger or high spots, Reiner brings just enough directorial zeal to spice things up. 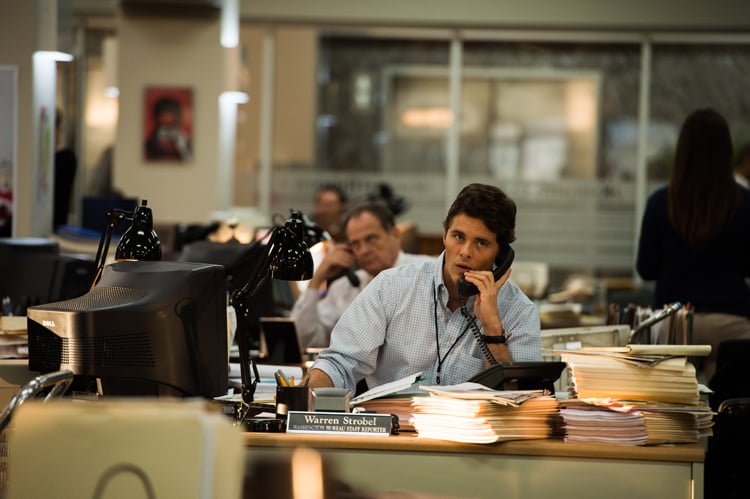 The leading trio of Marsden, Harrelson, and Reiner have great comedic and dramatic chemistry with each other, even if they each fall into a specific, convenient set of character archetypes. Marsden has the most intellectual and least flashy role as the judicious, straight faced one. Harrelson is aptly cast as the freewheeling loose cannon. Reiner is the gruff boss. Jones, who plays famed war correspondent Joe Galloway, gets to be the equally gruff veteran journalist brought on because of his invaluable State Department connections. (In a nice, subtly funny bit of art imitating life, the first time we see Galloway is during a press junket for the film We We’re Soldiers, which was based on one of his books, and Jones responds to the reporters in the room in the same monosyllabic, disinterested way that the actor has been famously known to present himself to the press.) Their parts aren’t particularly deep or elaborate, despite unnecessary romantic subplots for Marsden and Harrelson, with the former paired alongside Jessica Biel and the latter opposite Milla Jovovich, both of whom are wasted and seemingly on hand so the cast wasn’t so resolutely male. Everyone looks and feels the part, and not much more is needed from them as performers. Just like their real life avatars, they’re being paid to do a job and do it to the best of their abilities in service of the story.

Politically speaking, Shock and Awe, despite its lower than average indie film budget, feels like a throwback to the kinds of prestige projects Reiner was making in the 1990s. Reiner has always been a politically intriguing filmmaker whenever his stories focus on people in positions of power. He’s proudly American and a huge supporter of the military (as evidenced by a thin subplot here involving Luke Tennie as a young man stirred to join the army in the wake of 9/11), but he’s also staunchly anti-Republican, against war profiteering, and an open skeptic. He proudly waves the flag for the tenets of American culture that he believes in, but will quickly hang his head in shame at his country’s missteps. The script plays to Reiner’s political strengths, always reminding the viewers and the characters that Knight Ridder is a syndicated wire source for newspapers in smaller towns and communities – many with military bases – who’re most in need of hearing the unbiased, unvarnished truth. Shock and Awe might not be all that original in its mechanics, but it’s so firmly within Reiner’s filmmaking wheelhouse that it emerges as his most energetic and impassioned film in quite some time.

While obvious connections to the current American political administration and media spin are inevitable, Shock and Awe still feels old school in its aims. With every war since World War II feeling like a series of “forgotten” battles, Reiner wants to draw a parallel between the ill advised and defined goals of the Iraqi mission and the equally foolhardy and questionable use of American troops in Vietnam. Shock and Awe isn’t a merely plea for freedom of speech and press, but a call for transparency and accountability. It’s arguably a better message that often gets lost in the shuffle of heavily politicized films, and one that Reiner and Hartstone are wisely leaning into.

Like many of Reiner’s films for the past decade, Shock and Awe doesn’t reach the heights of the director’s greatest hits, but it’s perfectly valid and entertaining enough on its own terms. It might not add much to the cultural conversation in the wake of similar films and world events. It probably won’t even stick around in the minds of viewers all that long. But its heart and mind are firmly in the right places, and the material hits more often than it misfires. It’s not something that could be heralded as any sort of return to form, but at least it’s a film that unfolds on familiar, reliable ground for the director. It’s questionable if Reiner will ever make the leap back to more ambitious studio projects in the future, but for now he seems to be doing just fine in his respectable indie niche.

Check out the trailer for Shock and Awe: