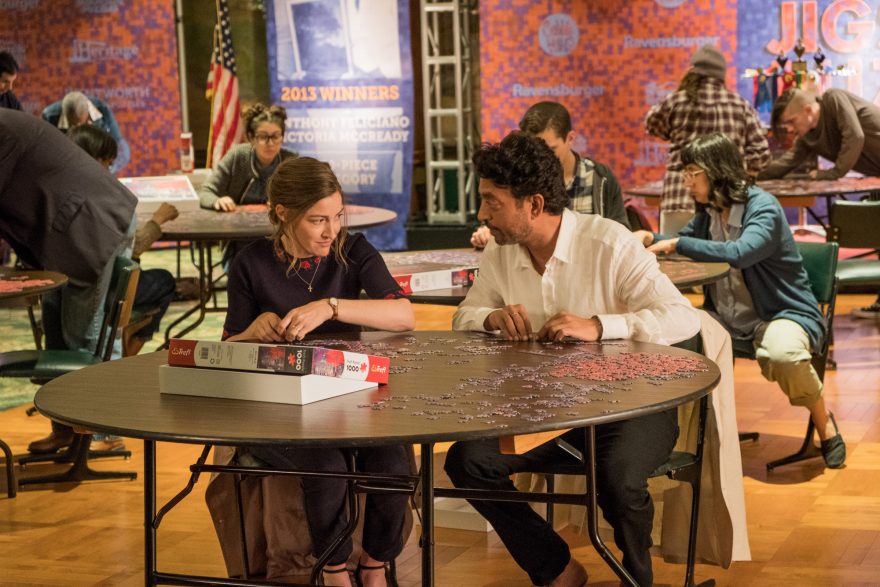 Constantly played in a minor, but assured key, the mid-life crisis drama Puzzle offers medium stakes and middling rewards. It’s a likable, if admittedly unexceptional and thoroughly predictable look at a bored Middle American housewife attempting to get her groove back where novel twists and dramatic turns are few and far between. It places the relatable Middle American plight of its protagonist solidly at the forefront and does little to gussy things up with melodrama or theatricality. The results are charming enough, suitably stirring, and not particularly memorable once Puzzle reaches its neatly packaged conclusion.

Scottish actress Kelly Macdonald gets a hard earned and long overdue starring role here as Agnes, a suburban Connecticut housewife growing weary of her drab and thankless existence as a homemaker. Her teenage sons – arrogantly aloof Gabe (Austin Abrams) and quietly soulful Ziggy (Bubba Weiler) – are soon to leave the nest, and her blue collar auto mechanic hubby, Louie (David Denman), enjoys the comfort, complacency, and predictability of his marriage. After Agnes “enjoys” a particularly lacklustre birthday celebration, she becomes transfixed by one of her presents: a jigsaw puzzle map of the world. After completing the puzzle with relative speed and ease, Agnes embraces her newfound hobby with a renewed sense of vigor. On a day trip to New York City to procure more puzzles, she notices a DIY ad posted by someone “desperately” looking for a partner to help compete in a national puzzle solving competition. She answers the post and begins a friendship with Robert (Irrfan Khan), a wealthy layabout with an unhealthy obsession with catastrophic current events coverage. The partnership allows Agnes a chance to release some of her frustrations at home, but when her extracurricular activities and a slight attraction to Robert start interfering with her housework and marriage, she’s forced into making some difficult choices about her future.

Puzzle is a remake of a 2009 Argentine film, adapted here for English speaking audiences by screenwriters Oren Moverman (Rampart, Love & Mercy) and first time scribe Polly Mann, and producer turned director Marc Turtletaub (not to be confused with Jon Turtletaub, whose vastly different film The Meg also opens locally this week). While I haven’t seen writer/director Natalia Smirnoff’s original film, I can understand how such a story could be easily adapted to fit nearly any culture. Puzzle is a slice-of-life drama where anything potentially false or melodramatic has been jettisoned. All arguments, frustrations, attractions, and conflicts organically rise from the lot the characters have been cast, and Puzzle often gets by on its own pronounced authenticity. While most films about troubled heteronormative marriages told from the perspectives of fed up wives focus on someone doing something terrible to incite a conflict, Turtletaub’s film takes the road less travelled by showing a dissolving partnership as the result of decades of neglect and latent resentment. It’s a marriage that isn’t undone by grandiose deceptions and transgressions, but rather by the mounting of little white lies that people tell to delude themselves into thinking that everything is fine.

There’s a fascinating Catholic undercurrent to Puzzle that could almost qualify this as a “faith based” film. Agnes is a mostly proud, practicing, but gradually lapsing Catholic, and her family makes their faith part of their daily routine. Set during the lead up to the Easter holiday, Puzzle gives itself a metaphorical parallel to the resurrection of Christ. While Agnes growing attraction to Robert is risqué and morally conflicting, it’s her religious faith – that notorious Catholic guilt – that seems to be holding her back as much as her marriage does. Her path towards enlightenment – steered by Khan’s relatively nondenominational Indian-American character – is mirrored expertly by Denman’s nicely crafted performance of a husband that’s the human embodiment of noxious, fragile, old-school Christian masculinity. If Louie didn’t have God, his deeply Americanized blue collar ideals, and a wife quietly holding down the homefront, he’d be completely lost. The interplay between Agnes, Robert, and their shared faith is the most intriguing aspect of Puzzle, offering some interesting existential asides that have a lot of interesting things to say about human selfishness and entitlement. Sadly, this often comes across as a side effect of Turtletaub’s main plotline. 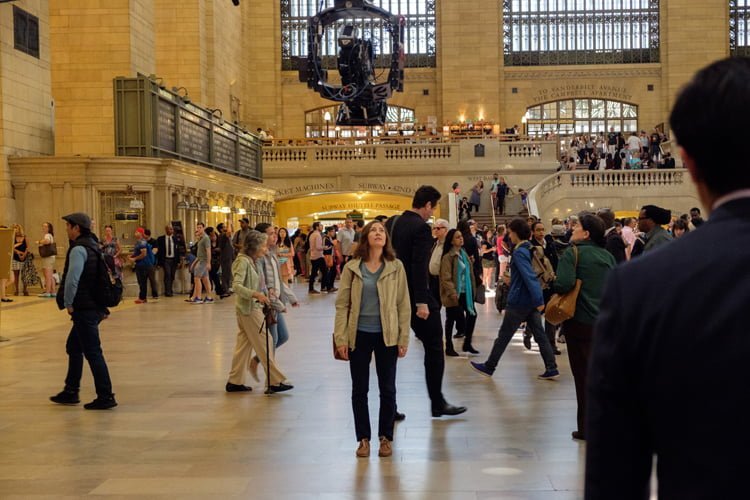 The main throughline for Puzzle is the “will she or won’t she” choices faced by Agnes, and these not particularly deep or interesting questions cause Turtletaub’s similarly unflashy work to tread upon predictable ground. There’s clearly a romantic attraction between the puzzle buddies that forms early and naturally, and all of it plays out exactly how one expects it would. There’s a question as to whether or not Agnes will compete in the big tournament as guilt towards the neglecting of her own family starts to mount, but that’s easily dealt with. A subplot involving the married couple selling a vacation property feels tacked on simply to add more arguments to a relatively restrained family dispute.

While it’s admirable to pitch something like Puzzle at such a resolutely believable level, it ultimately leads to a film that gives in to clichés without realizing what it’s doing. The clichéd answers to Agnes’ problems feel natural because they’re the easiest solutions to her issues. The questions raised about marital faithfulness and personal responsibility offer a lot of challenging material, and the low key approach employed by Turtletaub and company is more welcome than a melodramatic approach, but the final destination of Puzzle feels less like a tale of empowerment and more like a few pages out of a Canned Chicken Soup for the Soul book. It’s a film that’s unadorned in every way, for better and for worse. If your octogenarian great-grandmother were to watch this on a rainy afternoon, I would venture a guess that she’d enjoy it. The mirroring of Agnes’ downbeat day-to-day existence with a monotonous, easily digestible plotline means that Puzzle frequently drags en route to its hopeful, but predictable conclusion.

It’s helped every step of the way by Macdonald, however, who never fails to captivate, even when Agnes isn’t doing anything at all. She’s the type of performer who can say more with a pair of downcast eyes than most could say with a soliloquy, making her scenes opposite the equally expressive Khan and Denman rise above the middle-of-the-road material. Puzzle is worth seeing for Macdonald’s delicate, fragile performance alone. She sells the film’s authenticity better than the by-the-numbers script and rudimentary direction ever could. Macdonald and her well chosen castmates elevate the film from being “mediocre, but harmless” into something good.

Puzzle opens at Varsity Cinemas and VIP in Toronto and International Village in Vancouver on Friday, August 10, 2018. It opens on Friday, August 17 in Montreal and expands to additional Canadian cities throughout the summer and fall.

Check out the trailer for Puzzle: