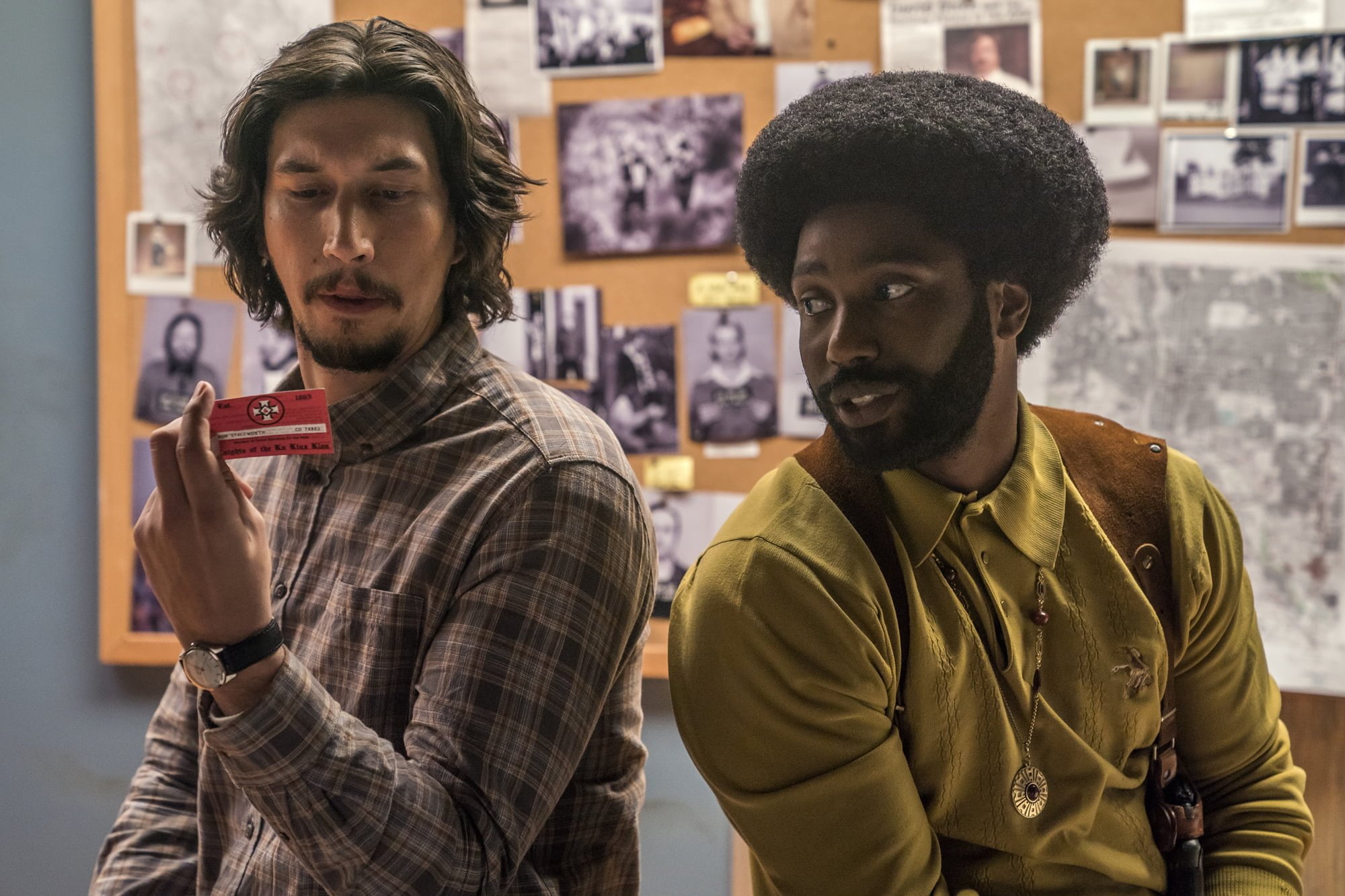 If some of the greatest humour comes from tremendous suffering, then Spike Lee’s riotously funny and sharply pointed period piece BlacKkKlansman is one of the best examples of how those who are discriminated against often have to laugh to keep from crying. Based on an outlandish true story about a black Colorado police officer who somehow infiltrated the Ku Klux Klan, BlacKkKansman embraces the surreal leanings of its admittedly rousing and humorous story while chillingly reminding viewers that the relationship between the black community and the cops hasn’t changed much in the past several decades. It’s assuredly one of Lee’s funniest and most entertaining films, but also some of the most timely, thoughtful, and complex material that he’s ever produced.

Since an early age, Ron Stallworth (John David Washington) wanted to be a police officer fighting for justice. In the mid-1970s, Stallworth would become the first black cop hired by the resolutely white Colorado Springs community. Fed up with his initial assignment working as a desk clerk in the records room, the highly motivated Stallworth begs his superior for a transfer to the undercover squad, believing that his race could be something that department sorely needs. After a thankless assignment infiltrating a university speaking engagement headlined by a Black Panther leader introduces him to his girlfriend (Laura Harrier), Stallworth’s next job for the police department is far more complex and borderline insane. After blindly cold-calling the local chapter of the Ku Klux Klan, Stallworth uses his smooth talking, vaguely white sounding voice to convince the unsuspecting rube on the other end that he believes the white race should remain pure, and that he’s genuinely interested in signing up. Accidentally using his real name and knowing that a black man could never actually join the KKK, Stallworth ends up working closely with Flip Zimmerman (Adam Driver), a white, Jewish undercover officer that will serve as Ron’s surrogate in the field. Ron and Flip gain connections within the organization, leading all the way to then Grand Wizard David Duke (Topher Grace, channeling his smuggest past character to great effect here). Their investigation into the organization eventually uncovers the desires of one of the Klan’s more unhinged zealots to start a bloody, violent race war within the already splintered Colorado Springs community.

Lee’s no stranger to racially motivated storytelling that’s well steeped in cinematic history, and while some would herald BlacKkKlansman as a return to form for the filmmaker, such a statement feels disingenuous. While this is mostly a playful period piece that looks and moves exactly as if it were filmed in the 70s, it feels a lot like more filmgoers are calling BlacKkKlansman “a comeback” because they’re paying attention to the news and the world around them. Lee’s voice has suddenly become relevant again, even though BlacKkKlansman often sides more with the director and co-writer’s more populist and entertaining sensibilities. I assure you that Lee and his always razor sharp intellect never went anywhere, and although BlacKkKlansman certainly displays a renewed fire in the belly, the only difference is that the core material is better than anything Lee has been dealt recently (save for the woefully underrated and more experimental Chi-Raq). 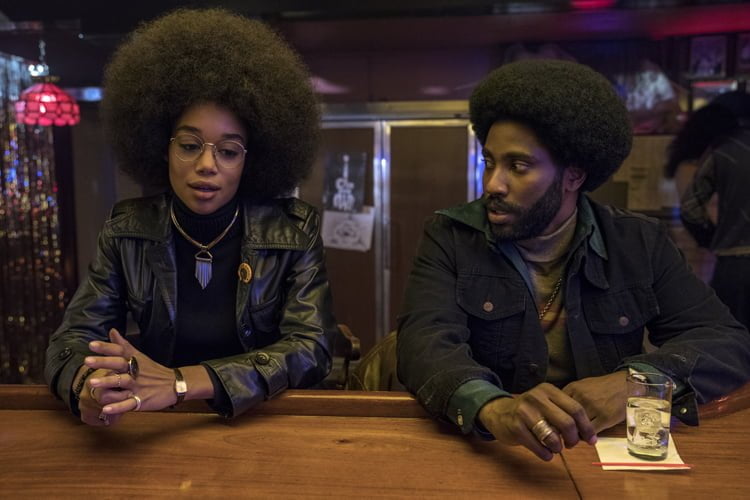 BlacKkKlansman has a lot on its mind, and unlike equally pointed and racially charged comedies Sorry to Bother You and Blindspotting – two films that will undoubtedly garner comparisons thanks to release date proximity – Lee’s film has the structure to sustain all of it. Like much of Lee’s best output, BlacKkKlansman is a film that could be read any number of ways, as long as the viewer is aware of the core points the filmmaker wants the viewer to process and retain. With the exception of an impassioned speech about violent injustice delivered by a cameoing Harry Belafonte (deftly intercut during one of the story’s most intense sequences), a hilarious opening that illustrates how racist rhetoric hasn’t changed much from the advent of cinema to the digital age, and a conclusion that ties everything frighteningly together with recent American events, BlackKklansman doesn’t have sermonizing on its mind. Lee and his co-writers (adapting Stallworth’s memoirs) want to deliver a satisfying, subtext packed yarn about pulling the wool over the eyes of bigots. Lee wants this film to function primarily as a crowd pleaser, intelligently understanding that people will likely retain more of the lessons being given if they feel emotionally stimulated and invested by what they’re seeing.

Washington and Driver are a comedic and dramatic dream team. Both of them are hammering home the material’s undercurrent of self-loathing and doubt. Washington’s Stallworth joined the force to do good, but he’s quickly becoming depressed and paranoid by the increasing amount of lies he has to tell to keep the investigation going, with Harrier’s constantly skeptical and righteous girlfriend always calling him out on his morally flaky bullshit. Washington delivers a previously unseen depiction of a morally conflicted black man, with his work always asking if someone from a persecuted racial background could ever be a cop without being a traitor to himself, something nicely illustrated by an off the cuff dialogue about past black cinematic heroes. The characters surrounding Stallworth often think that he’s either terrible at being black or terrible at being a cop. Similarly, Driver’s increasingly endangered officer is taken to task for not being much of a Jew. Both are characters who have kept their backgrounds out of the eye of public scrutiny embroiled in a conflict where their identities have to be further repressed. They play phenomenally off each other with performances that beg the viewer to answer if assimilation into white Christian culture is equal to apathy or treason. Even if Ron and Flip are successful, there’s no winning for them once this is all over.

In some ways, BlacKkKlansman could be read in the Trump era as something akin to an Obama parallel; the story of an upstanding young brother who wants to change things from the inside with the help of some smartly selected white counterparts. It could be read as a parody of modern politics. It could be read most simply as a racially charged, stranger than fiction true crime yarn. It can be seen as Lee answering his harshest critics who suggest (incorrectly) that he’s been coasting for the past several years. No matter the reading, the lessons delivered about America’s past and future are indispensible. BlacKkKlansman is a hilarious, heartwrenching, entertaining, and incendiary work from one of our best living filmmakers.

Check out the trailer for BlacKkKlansman: