Director and co-writer Desiree Akhavan’s LGBTQ2S teen drama The Miseducation of Cameron Post is a well crafted, exceptionally performed, and heartbreakingly poignant film that still manages to have a gaping emotional hole at its centre. This story of teens sent mostly against their will to “pray the gay away” at an American Christian conversion therapy camp in the early 90s is the kind of story that’s easy to sympathize and empathize with thanks to subject matter that tackles sexual discrimination head on, but it’s missing a key element that would turn it from a very good film and into something exceptional.

After ditching her date and getting caught smoking weed and snogging the homecoming queen in the parking lot of her school, parentless high school junior Cameron Post (Chloë Grace Moretz) is shipped off to God’s Promise, a rural Montana commune that queer teens get sent to when adults don’t know what to do with them. The program is run by devout Dr. Lydia Marsh (Jennifer Ehle) and her “formerly” gay brother, Reverend Rick (John Gallagher Jr.). Forced into going along with the program, Cameron strikes up a friendship with a black amputee girl named Jane Fonda (Sasha Lane) and Adam (Forrest Goodluck), a two-spirited Lakota boy. Gradually through her interactions with her fellow campers/inmates, Cameron learns that her story and sexuality aren’t all that strange or out of the ordinary.

Persian-American filmmaker Akhavan (Appropriate Behavior) adapts Emily M. Danforth’s novel of the same name with the help of co-writer Cecilia Frugiuele, and together they create a decidedly lived experience that’s meant to uncomfortably mirror the plight of the teens forced into denying their sexual impulses and preferences. Although The Miseducation of Cameron Post is set in 1993, Akhavan does a fine job keeping any sort of period nostalgia at bay. While the visuals, production design, and outfits all look period appropriate, there’s a sensibility to Akhavan’s work here that underlines how these kinds of stories are constantly unfolding all over the world today. It balances specifics that are very much of their time with a smart sense of dramatic ambiguity that adds a timeless undercurrent of sadness and pathos.

The characters are easy to sympathize with, and the methods employed by zealot Lydia and the hopelessly deluded Rick are effectively slimy and misguided. For a doctor, Lydia doesn’t seem to know much, preferring to say that homosexual tendencies are symptoms of deeper problems and traumas, and refusing to acknowledge that some sins against Christianity are far worse than others. The world they’ve been shipped to is a colourless void where naturally occurring personal victories and epiphanies are almost impossible to come by. It’s not a humourless film by any stretch, with Moretz, Lane, and Goodluck’s effortless chemistry providing some well timed chuckles, but it’s a story that needs to feel like any sense of hope for these teens has been robbed by means of religious zealotry. 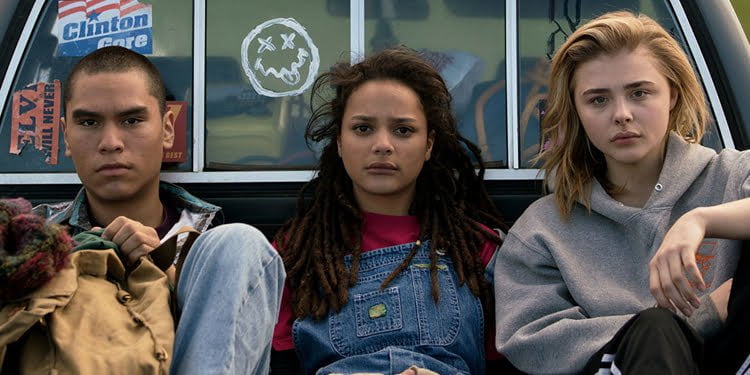 Moretz gives one of her best performances here, effectively balancing her character’s intelligence and vulnerability. More impressive, however, are Lane, Goodluck, and Gallagher, all of whom readily steal scenes from each other, both dramatically and comedically. While Lane and Gallagher have already established themselves as talents to watch in the past several years, it’s Goodluck who deserves to get more attention thanks to his work here. As the most level-headed and soulful of the bunch, he provides the film with a much needed emotional backbone.

Because that’s ultimately what’s missing from The Miseducation of Cameron Post: a well definied emotional backbone and moral center beyond just stating the obvious. The Miseducation of Cameron Post is built entirely around a main character that’s written here as a bit of a blank slate. While Akhavan shows chunks of Cameron’s past in fleeting flashbacks, her lack of parents or external life outside of the forbidden relationship that landed her in God’s Promise remains a frustrating mystery. As good as Moretz is at conveying the character’s malaise, it’s entirely upon the actor to make the part work because she’s given almost nothing tangible to work with.

Every side character, especially Adam, Jane, a young man that’s happy because he’s about to be released, and a Minnesota Vikings obsessed roommate, are given vibrant, intriguing backstories that are vastly more interesting and more fleshed out than Cameron’s narrative. They have problems with parents, authority figures, and other people around them, and their struggles with their sexual identities are expertly defined. In comparison to the characters around her, Cameron’s lack of an external life feels like a cop-out, and the few moments where we see how she struggles feel manipulative, inorganic afterthoughts. This might be in a bid to allow viewers to place themselves more readily in the main character’s shoes, but it also leaves The Education of Cameron Post without a commanding titular character. It’s not hard to think that a film about any of the supporting characters would have been more engaging and powerful than a film about Cameron, and given the film’s title, that’s a major problem.

Overall, The Miseducation of Cameron Post still has its heart, mind, and morals in the right place, and it certainly never talks down to the experiences of teens who have suffered through similar crises. That’s more important for a film like this than any storytelling pitfalls. It’s just a shame that this still feels like it was one script draft away from being an all time teen movie classic.

Check out the trailer for The Miseducation of Cameron Post: