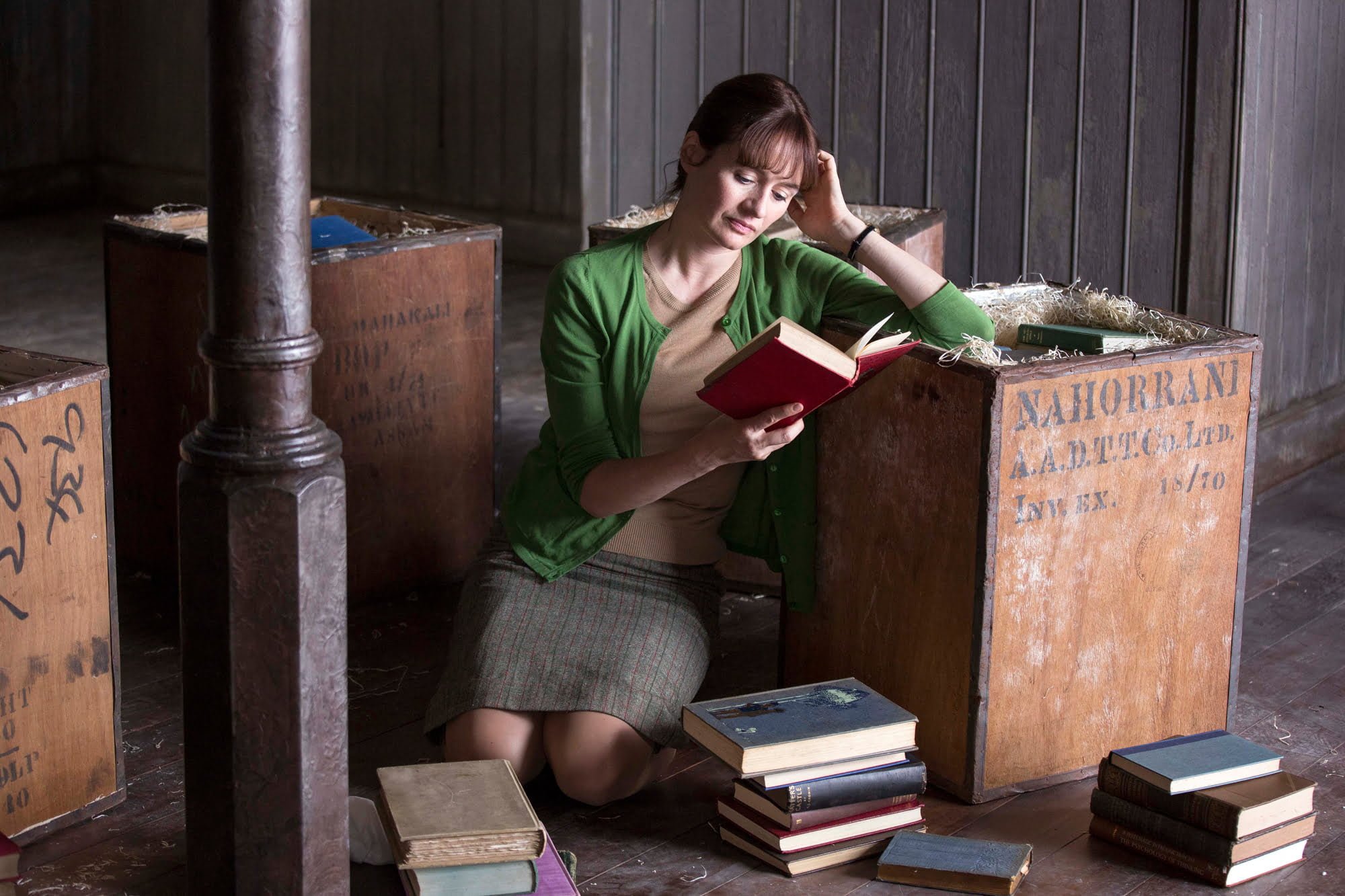 Unbearably dull, frustratingly inert, and laughably underwritten, Spanish writer-director Isabel Coixet’s frankly embarrassing British period piece drama The Bookshop might be the most underwhelming and least necessary film of the year. Forgetting to imbue a nearly two hour long film with characters worth following or any semblance of tangible, well defined conflict, The Bookshop thinks it can coast along via the talents of established and respected actors in leading roles playing “stiff upper lipped” British stereotypes and some picturesque filming locations. There’s no substitute for substance, and Coixet (Learning to Drive, Endless Night) has made a film that’s so resolutely polite and inessential that it practically evaporates as it unfolds.

It’s 1959, and widower Florence Green (Emily Mortimer) has purchased a highly desirable, but badly in need of repair estate property along a British coastline. Her dream is to open a bookshop in a conservative, mostly aristocratic community that doesn’t have one already. Some scoff at the idea (for what reason, I will literally never know), but Florence follows her dream, anyway, making friends with a wealthy local recluse (Bill Nighy) in the process. The biggest opposition to Florence’s new bibliophile haven is Violet Gamart (Patricia Clarkson), a wealthy dame who has dreamed of turning “the old house” into a performing arts centre. Skilled as a politician, Violet is capable of making the townspeople sway to her every rhythm, but Florence refuses to give up the property.

There’s one major problem with Coixet’s adaptation of Penelope Fitzgerald’s bestselling novel. I can’t explain why any character in this film does anything. The Bookshop plunks viewers immediately into a story that feels like it has already been in progress for over an hour. Florence isn’t a character, she’s a well intentioned cipher; a complete blank slate. We’re told from the outset (via clunky narration that seems to have been written by a robot) that Florence has lost someone close to her, but she never grieves and we almost never learn what she lost in the first place. It takes over an hour to get any personal details about the main character, and when it does alive the sole explanation for her desires is maddeningly simplistic and only serves to raise deeper questions that will never be answered because no one bothered to ask them during the writing process. Coixet asks the viewer to follow Florence in good faith, simply because the idea of spreading literacy is an altruistic one. It’s an admirable point of view that means precisely nothing when it isn’t backed up by real human investment. The only character trait that’s discernible about Florence is that she loves books, and that’s not enough for Mortimer to work with. Although she’s a highly capable performer, no one was going to make this material work. It’s a film that wants to show how bad things can happen to good people, but it forgets to show why the main character is a good person in the first place.

If Mortimer comes off poorly, her co-leads fare even worse. Clarkson’s villain similarly isn’t given any motivation – outside of wanting to forward the arts in her own posh way – and doesn’t become truly abhorrent and underhanded until the final act. Violet mostly has the townsfolk do her dastardly bidding, and even then the viewer is forced into wondering if this couldn’t have been handled better or more efficiently, both logically and from a narrative standpoint. All Clarkson has to do is glower and give some side-eye in reaction shot cutaways. In a smarter film with something to say about wealth and class, this kind of malevolent social butterfly could have been an interesting villainess. Instead, she’s just as questionable as everyone else around her. 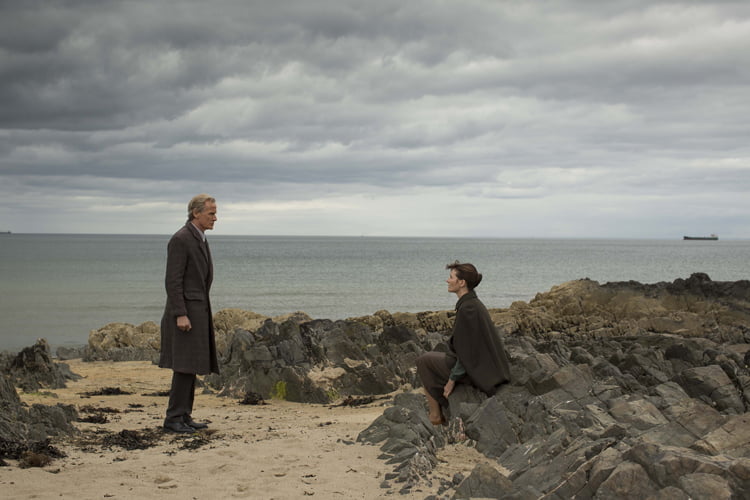 Don’t ask me what Nighy’s doing or how Coixet has chosen to frame what might be the most off-putting and eccentric performance of his career. Stammering over his lines to suggest either that his character has some sort of never defined injury or that the actor refused to do more than one take, Nighy sleepwalks through the entire film, giving only a bare minimum of emotion back to such hollow material. There were moments during close-ups where one can see Nighy’s eyes darting off screen, and given his stilted line deliver, I began wondering if he had been reading off cue cards or waiting for prompts. At least Nighy gets the only truly funny and cutting line of dialogue Coixet can mustre. It’s about how boring the characters are as people, and it’s the only time when The Bookshop is refreshingly truthful.

Even with the lack of character, Coixet does nothing to fill in the gaps with anything substantive. Lengthy, dialogue driven scenes feel like time killing banter. They’re written in such a way that it doesn’t feel like human beings conversing, but uncomfortably like watching people interview each other. Coixet also forces her cast – who can’t build chemistry with each other if they don’t know what they’re trying to achieve – to pepper their conversations with lengthy, thudding silences. Such moments could be used to underline things unspoken or to display a degree of thoughtfulness. Here, the silence is merely silence, and it becomes unintentionally hilarious how awkward it all becomes. The Bookshop is a film so incompetently produced on a narrative and performative level that it can’t even think of subtext. It would be more laughably bad if it wasn’t so excruciatingly boring.

The seaside locales and production design found in The Bookshop are nice enough, I guess. It’s well lit and the cinematography is assured. I’m really struggling to say anything nice about The Bookshop. It’s an innocuous, knowingly clichéd film geared towards a specific, undiscerning audience. It’s also unbearably terrible to a point where I’d almost prefer that anyone thinking of seeing The Bookshop would watch any number of maudlin and openly manipulative crowd pleasers instead. Considering that The Bookshop builds – almost out of nowhere – to a resolutely mean and sour finale (that involves what I would like to call “Chekhov’s Space Heater”), I have a hard time believing that anyone will leave Coixet’s film feeling uplifted, enlightened, or empowered. This film is so threadbare it’s practically non-existent; a black hole that will mysteriously suck two hours of one’s life away and give nothing back in return.

The Bookshop opens in select cities across Canada on Friday, August 24, 2018.

Check out the trailer for The Bookshop: